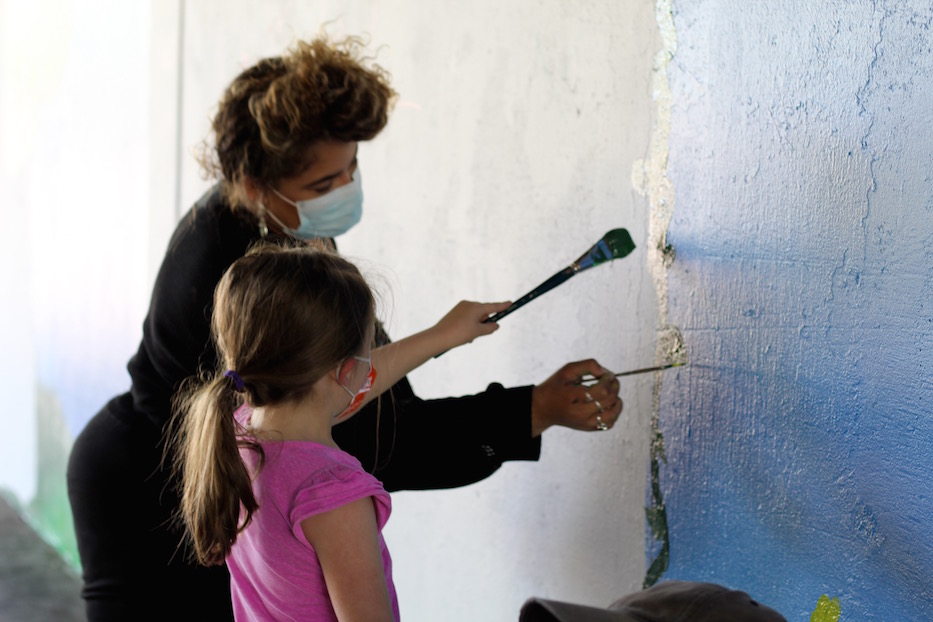 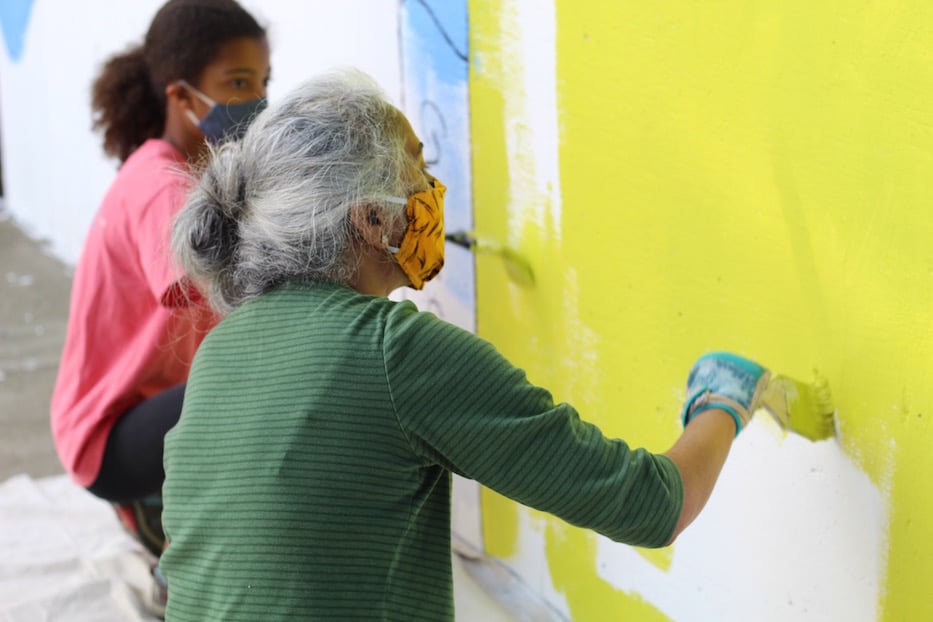 Ten-year-old Haviland Hawthorne lifted her sunshine-colored brush to the underpass, and began to fill in the wall of a yellow house. Just a few yards down, Elm and Mulberry trees shot up from the pavement with record speed. Artist Anika Stewart scurried between stations, refilling trays with thick red, yellow and green paint. It glimmered in the bright morning.

Saturday and Sunday, volunteers came out to work on the long-awaited State Street Colorful Mural Project,  a collaboration among the Bradley Street Bicycle Co-Op (BSBC), Arts For Learning Connecticut, the Upper State Street Association (USSA) and local artists Alex Novak and Anika Stewart. After two years of waiting for approval from the Connecticut Department of Transportation (DOT), artists have finally been able to bring the project to fruition.

The project, which has received financial backing from the community and the Could Be Fund, has been ready and fully funded since 2019. For the past three weeks, artists and community members have prepared the space by power-washing and priming the walls. Last week, the DOT surprised painters by installing new LED lights in the underpass. New Haveners have been campaigning for better underpass lighting as a public safety measure since 2017.

“It feels amazing,” said BSBC founder and owner John Martin. “I’m always humbled by the people who show up.”

Saturday, State and Bradley Street residents came out to paint, many making new friends and reconnecting with neighbors in the process. The design is based on homes and buildings that were in the neighborhood prior to urban renewal, as well as many that still occupy State Street. They include Novak’s father’s childhood home on Avon Street, where she is now living. Her art studio is where his high school bedroom once stood. 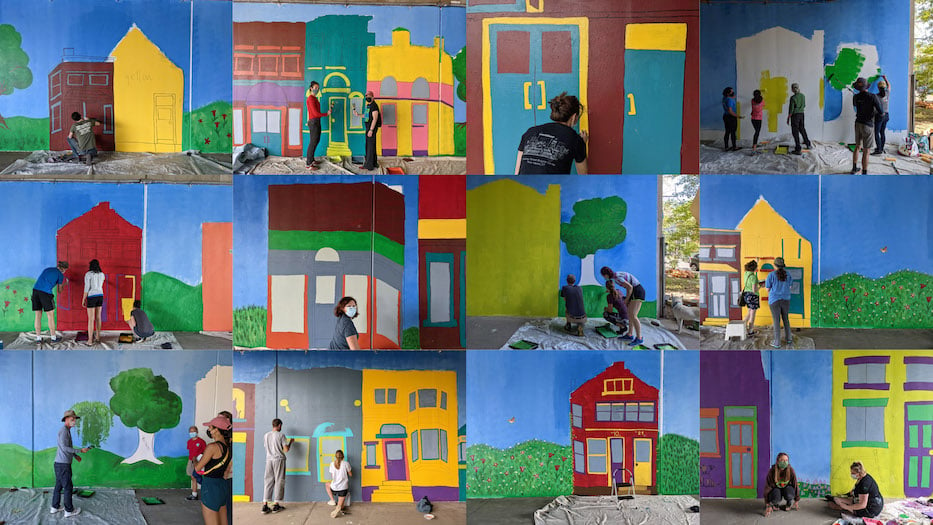 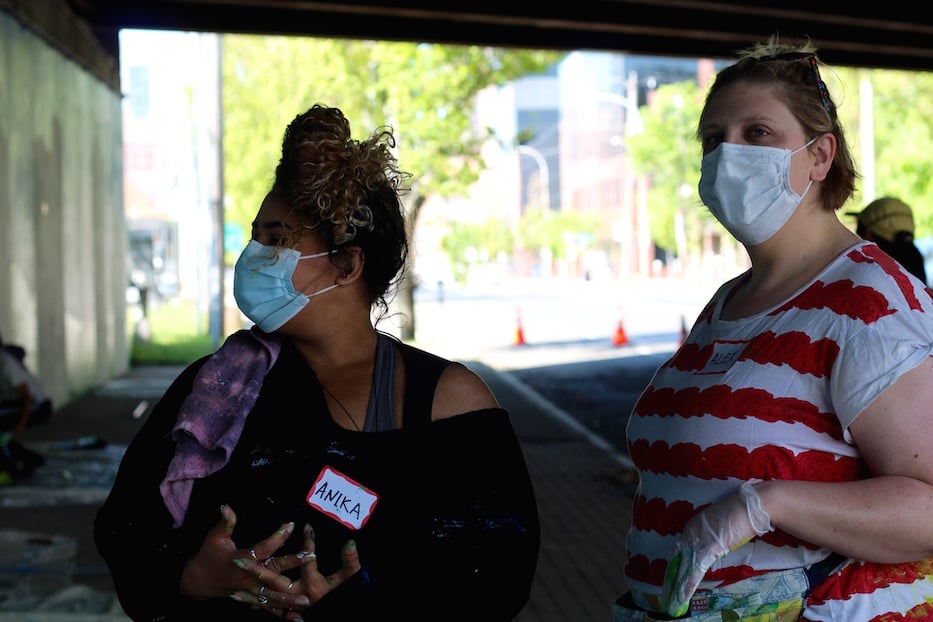 Before Saturday, she and Stewart outlined buildings, trees, and a line for grass with a sort of paint-by-numbers format. She recalled texting furiously with Stewart in the weeks before the mural went up, panicking that something would go wrong. Instead, she watched as community members came out ready to power wash, prime and paint.

Stewart, who works at Rimage Salon & Spa downtown, said that the mural has been a very bright spot in a long and challenging year. Last March, she had three exhibitions on the horizon when the pandemic hit New Haven. The salon laid all of its employees off temporarily. When it reopened in June of last year, Stewart watched a landscape that was riddled with customers’ fear and hesitancy, reduced hours, and a landscape decimated by the pandemic. She’s just starting to come back from that, she said.

“New Haven has been really supportive,” Novak said. “There’s been a real effort to support artists.”

Around them, the underpass bustled with activity. Hawthorne, a fifth grader at Elm City Montessori School, came out with her teacher Ramya Subramanian and Subramanian’s daughter Rajani. As an East Rock resident and student at Adae Fine Art Academy down the street, Hawthorne said she sees the underpass all the time. Recently, she has watched its forlorn, graffitied walls become clean and crisp. Saturday, she and Subramanian worked on a bright yellow house as cars whizzed past on the street.

“This is really fun,” she said, returning to a deep plastic tray for more yellow paint. “Everyone can see it, and it’s just really beautiful.” 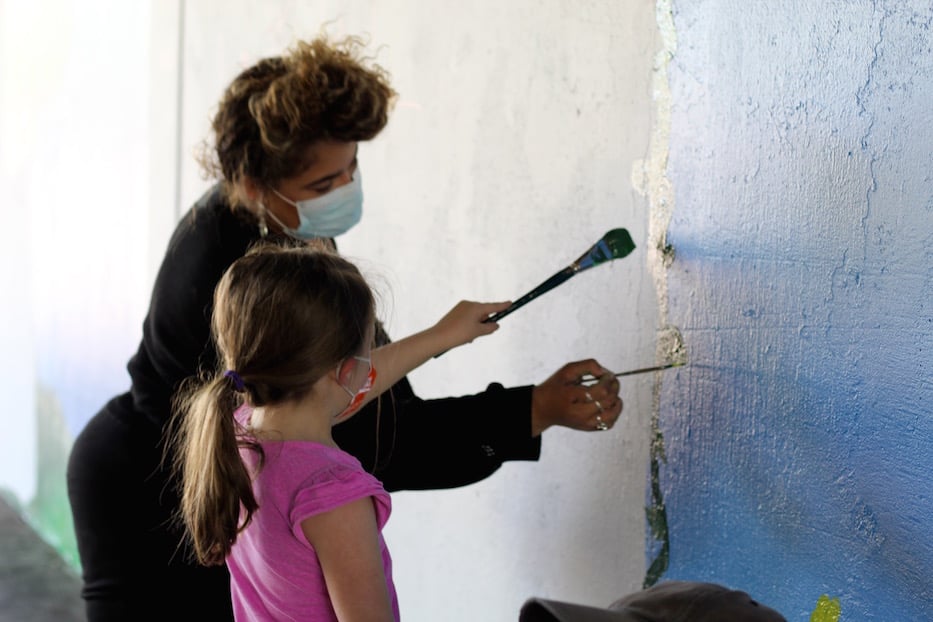 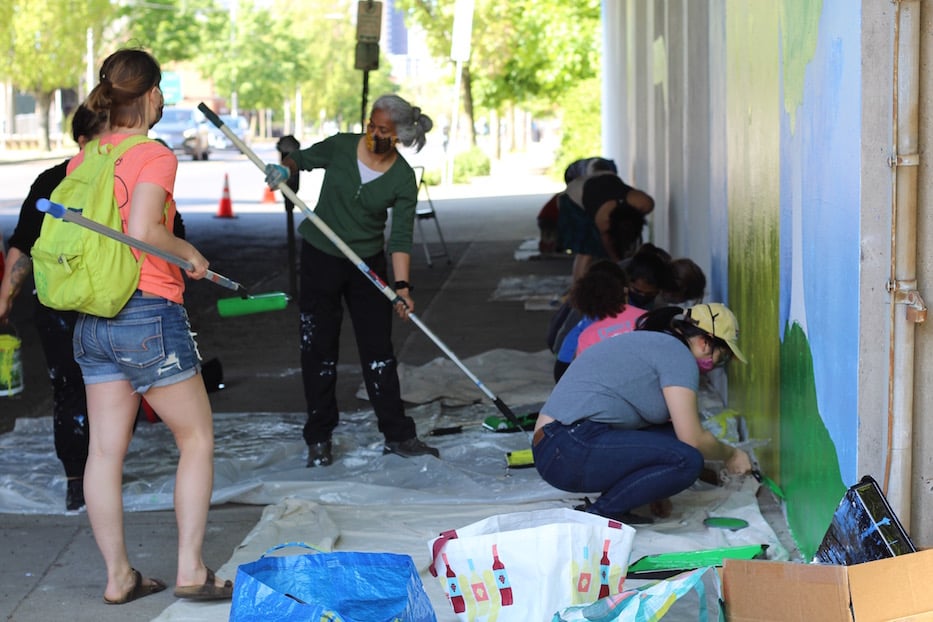 Subramanian, who lives nearby at State and Humphrey Streets, praised the team behind the mural for adding vibrancy to the neighborhood. She said that she and several neighbors have been eyeing a large wall by their homes that would be perfect for a work. For her, public art “can be much more than art”—it has the potential to double as a vehicle for social justice and community growth. Rajani, who is studying neuroscience at the College of Wooster, helped fill in a yellow house as she spoke.

Others saw it as a chance for overdue civic engagement. Sarah Masotta, who lives on Bradley Street and is a member of WTF (Women Trans Femme) New Haven at the Co-Op, worries about the speed with which cars and buses travel on State Street. For five years, there was a flashing red light at the intersection. Then it disappeared. After seven years on Bradley Street, she’s come to love the neighborhood—and its people. She wants to see the light come back.

While she isn’t banking on the mural as a traffic calming measure, she added that she’s hopeful that drivers will see it and remember that they aren’t on the highway anymore. As she spoke, she bounced between painting a green patch of grass and looking for East Rock/Downtown Alder Abby Roth, who she had never met in person. When she flagged her down, she squealed a hello with delight.

“This is my community,” she said. “I think people will see this and realize that it’s a residential neighborhood. I love that it honors who was here before the highway.” 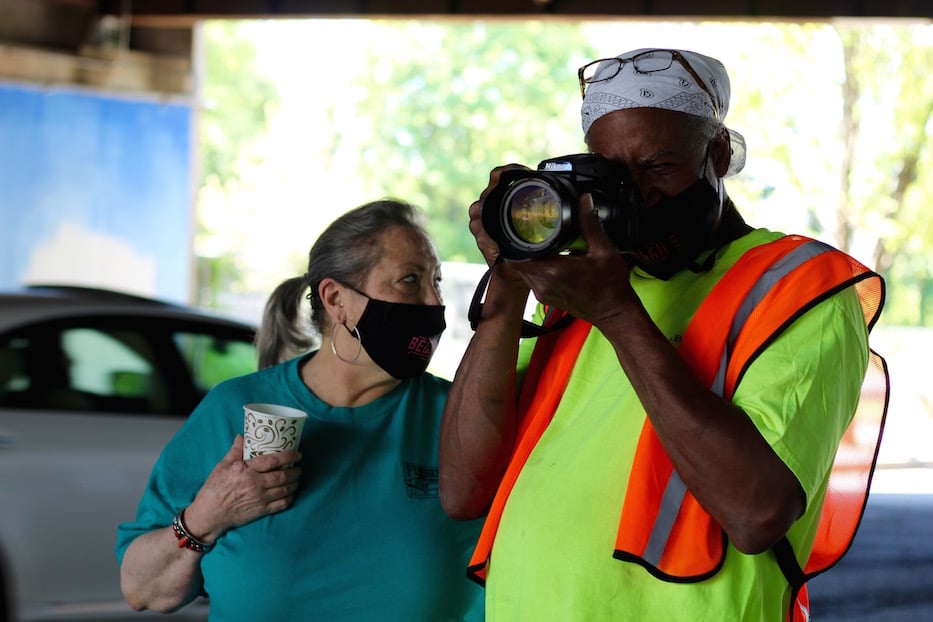 On the other side of the underpass, Charlie Nixon strolled in with his camera to document the process. Nixon, a landscaper and freelance photographer who now lives on the Jocelyn Square side of Humphrey Street, grew up in Fair Haven the 1960s, when I-91 was first going in. As a kid, he lived across the street from Ferraro’s Market, which is now owned by the Meat King Farms.

He remembered playing on the in-construction highway with his six siblings, who used it as a playground in the summertime and a hill for sledding in the winter. Decades later, he became a neighborhood steward for the 2014 Under 91 Project, which sought to bridge East Rock and Jocelyn Square with a sprawling underpass mural.

“It was exciting, actually,” he said. “There is a lot of history in New Haven. So to see this … this is so wonderful. This is awesome. It’s what the city has needed for some time.”

By mid-morning Saturday, flowering daffodils, excitable squirrels and climbing, deep green vines had bloomed across the underpass, covering both walls as bright houses and brick brownstones took shape. Across from the Thai restaurant September In Bangkok, architect Ming Thompson set up a large, rolling Diary Disk that read “I Dream” in multiple languages around the edges. She handed out white paint pens to people as they stopped to look at it.

The disk, one of multiple that are appearing across the city in the next weeks, is a project of the New Haven Department of Arts, Culture & Tourism and a student “Design Brigade” that worked through last summer. Ultimately, Design Brigade members are interested in creating a living memorial to those who have died and lost loved ones to Covid-19. The disks, of which there are a total of six, signal the beginning stages of that work.

They will appear together on the New Haven Green next month, during the International Festival of Arts & Ideas. From there, Thompson said, Design Brigade members envision a more permanent and responsive memorial, such as an art park to which community artists can contribute work. The disks have received support from the Arts Council of Greater New Haven and the Connecticut Mental Health Center Foundation among other partners.

“There’s kind of a wellness or mental health component to this,” Thompson said. “The diary disks allow people to be in conversation when they have been really isolated from each other for a long time. They are in neighborhoods all over the city, and they each have different prompts—like ‘I dream,’ ‘I wish,’ or ‘I remember.’”

I dream of a New Haven where people are housed, schools are well-funded, music flows from yards and porches, and bikes are a PLENTY, wrote Clancy Emanuel, a teacher at Cold Spring School who lives in the neighborhood.

I dream of a community with block parties that draw out all neighborhoods, jam sessions spewing off of porches, grilled food passed over fences, and love and support to everyone, from everyone, wrote Sunny Meadows farm manager Ariel Unger, who lives on East Street. She added that she would love to see a similar project come to the underpass in her neighborhood.

As painters approached the end of their morning shift, Thompson watched the disk fill with entries. While Mayor Justin Elicker painted thick, deep green blades of grass with his older daughter Molly, his younger daughter April and wife Natalie worked on an outline of her little hand. Elicker, who was coming off of one of the heaviest weeks the city has seen, said he was excited to see the work coming to life. He remembered the ill-fated “Inside Out Project,” a short lived public art initiative in 2012 that was defaced multiple times.

“I think there’s something about taking a place that feels devoid of humanity and spending time here,” he said. “This is about making the space feel more welcoming.” 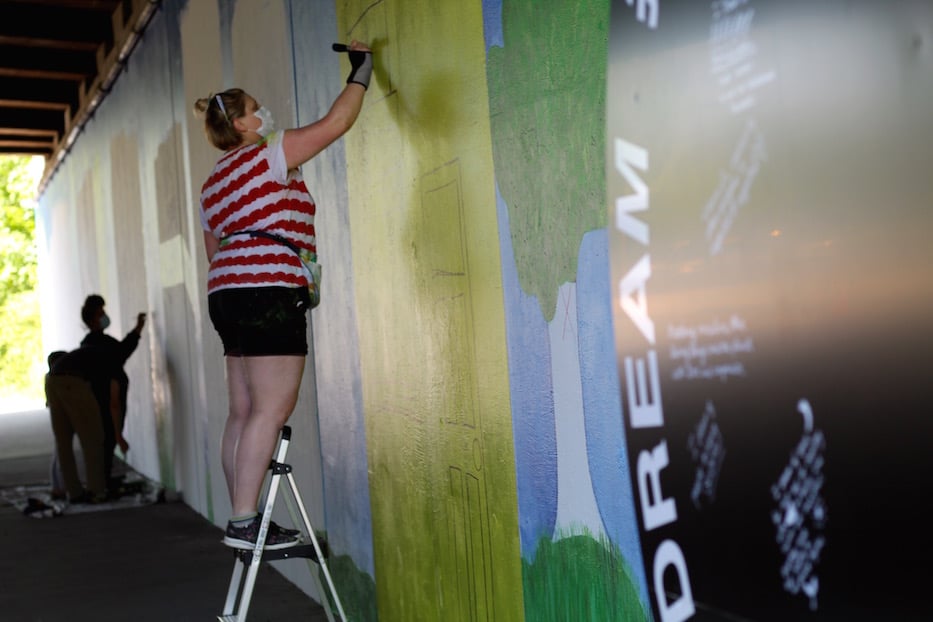 By the end of the morning shift, a whole streetscape had started to take shape. A few painters added small animals who tiptoed and pawed through the grass. Roth channeled the French Impressionists, adding suggestive bursts of yellow that danced above the sidewalk. Novak free-handed a door and windows on a yellow house. Next weekend, she and Stewart will return to add in the fine details on the work.

Martin said that he hopes that future public art projects receive a more expedient response from the state. In January, the city’s Board of Alders voted to give the city more autonomy over underpasses controlled by the Connecticut Department of Transportation. It is in accordance with the department’s 2019 public art policy.

The mural joins a recent flourishing of public art in the city, particularly on projects that have started this spring. Last month, work began on the first phase of Intersection to Connection, a project to unify Downtown and Wooster Square with public art. At the beginning of May, New Haven Rising and Unite Here-Local 34 added its "Yale: Respect New Haven" mural downtown. During Westville's Artwalk Week, a mural spearheaded by artist Heather Gendron arrived on Central Avenue. Last year, a total of eight murals landed between downtown and Newhallville.