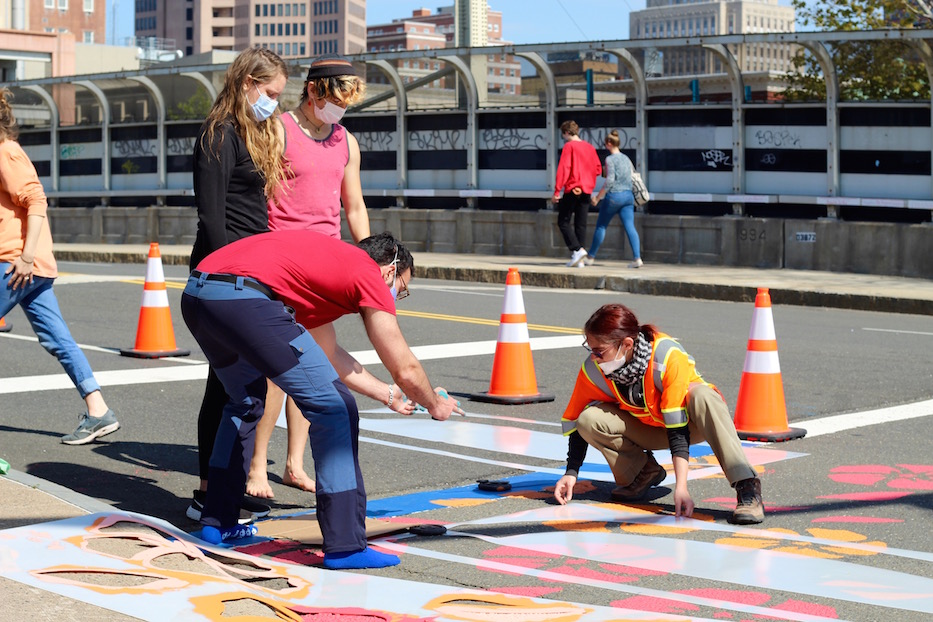 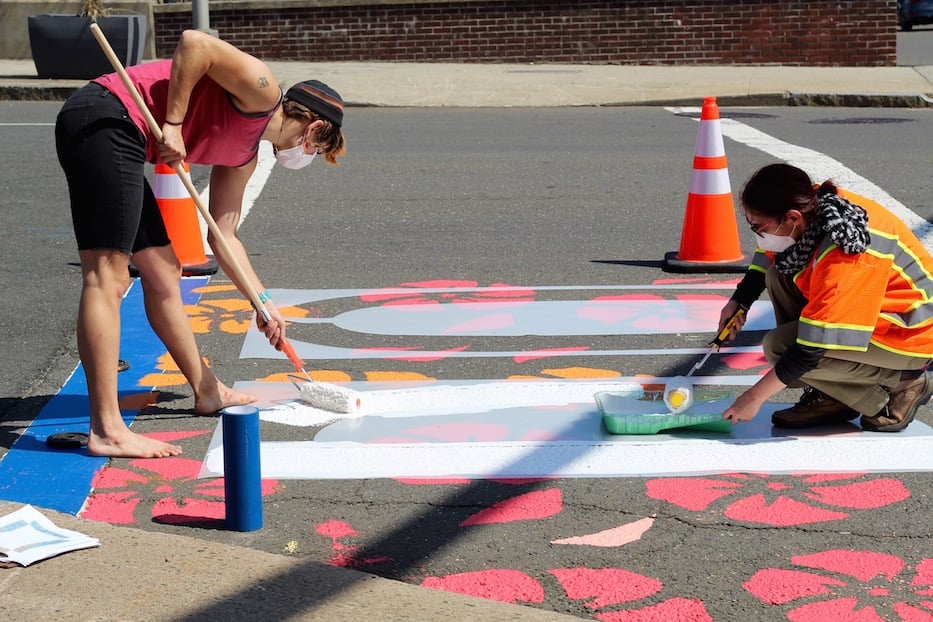 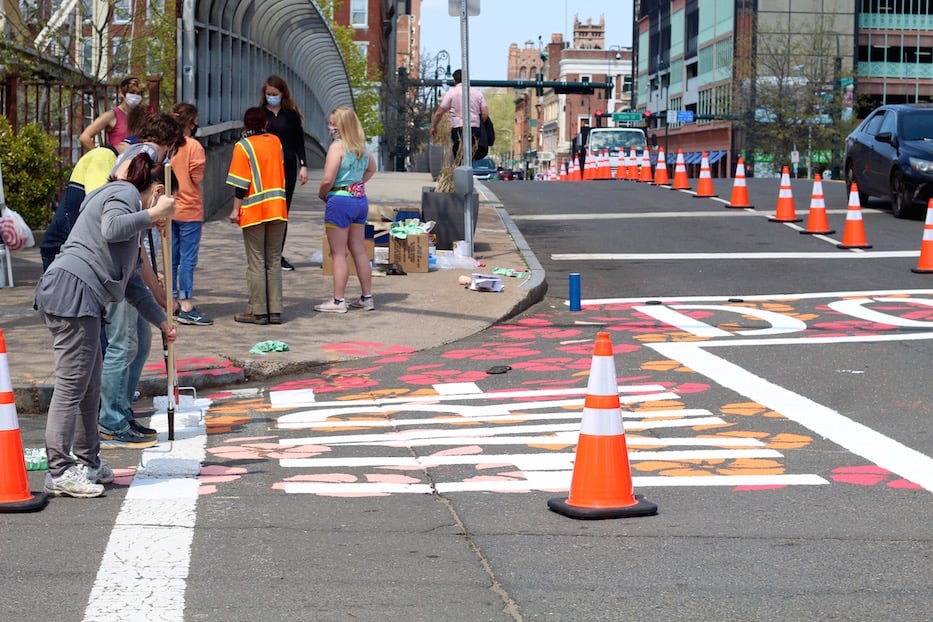 A spray of red and orange cherry blossoms exploded across half of Union Street, their petals bursting open to the morning sunlight. Over the intersection, Tank and the Bangas’ “For Andre'' pumped through a phone, making it hard not to dance. Just a block away, huge blue and green elm leaves criss-crossed State and Chapel Streets. Beside it, masked volunteers dipped their rollers into tubs of thick paint and started on a second coat.

Saturday, city residents joined Town Green Special Services District and Atelier Cue for Phase I of the long-awaited “Intersection To Connection,” a three-phase public art project designed to improve foot traffic, pedestrian safety and wayfinding between Downtown and Wooster Square. After a long process and ongoing scramble for funding, the city’s Board of Alders approved the project at the end of last year.

Fundraising for Phases II and III, which will require state approval for light installation, is still ongoing. It is the first New Haven-based project that Atelier Cue, which is based nearby in Erector Square, gets to do on its home turf.

“I’m elated,” said Atelier Cue co-founder Ioana Barac, who has helmed the project with architect and Cue co-founder Marissa Mead for over two years. “It’s also the excitement of the installation, which is its own event, independent of anything that has happened before or anything that will happen after. It has a certain burst of energy.” 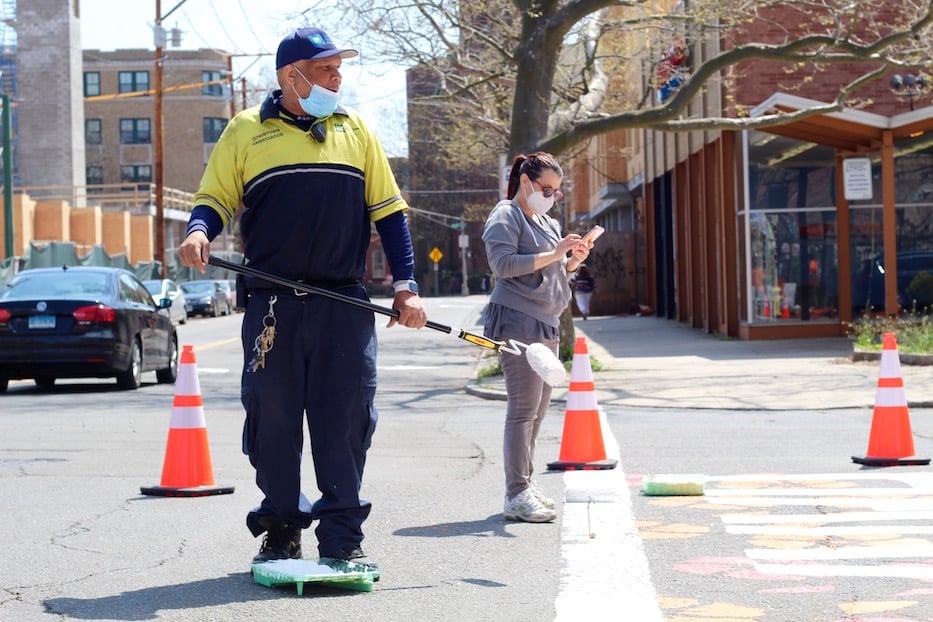 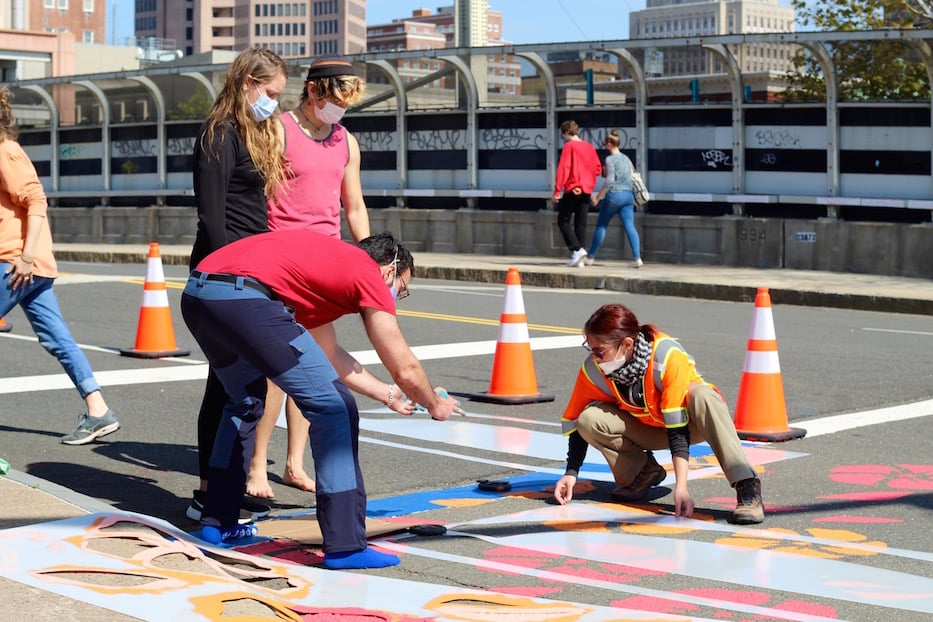 Top: Joe Ellis. Bottom: Barac and volunteers work to line up the stencils.

Around her, Chapel Street bustled with mid-morning activity. After signing up to paint, volunteers trickled in one by one and in pairs, a few still bleary-eyed in the sunny morning. A tent emblazoned with the words "Intersection To Connection" welcomed them. Barefoot in the intersection, Jude Fremd helped Barac steady a huge stencil emblazoned with letter shapes.

In addition to the project’s decorative elements—large cherry blossoms on Chapel and Union Streets, and bright elm leaves on Chapel and State Streets—intersections announce the neighborhoods that pedestrians are entering with big white letters. They include Downtown, the Hill, East Rock, Wooster Square, and Long Wharf.

As a research and development engineer and MakeHaven member, Fremd came out ready to paint with other New Haveners. Living in the city’s East Rock neighborhood, they said they “very much” consider themselves an artist, with interests in banjo, woodworking, and drawing that made them eager to help out. In the past year, their work for Town Green has included a socially distanced Santa sleigh and large wood boxes in Temple Plaza. By 11 a.m. their bare feet were speckled with red paint.

“I am a big proponent of color within a city,” they said. They chatted with their roommate Clancy Emanuel, a Cold Spring School teacher who was one espresso in and dancing to the music. As he did a shoulder shake and dipped a roller in white paint, Emanuel praised the project for adding vibrancy to the area. As a cyclist and pedestrian, crosswalk art makes his commute more enjoyable. He said he’d love to see more of it across the city, in addition to the pieces that have popped up downtown and in Newhallville, West River, and Fair Haven in the last year.

“This should just be the tip of the iceberg,” he said. “Seeing colorful things brightens my day. It makes me feel good about living in a city.” 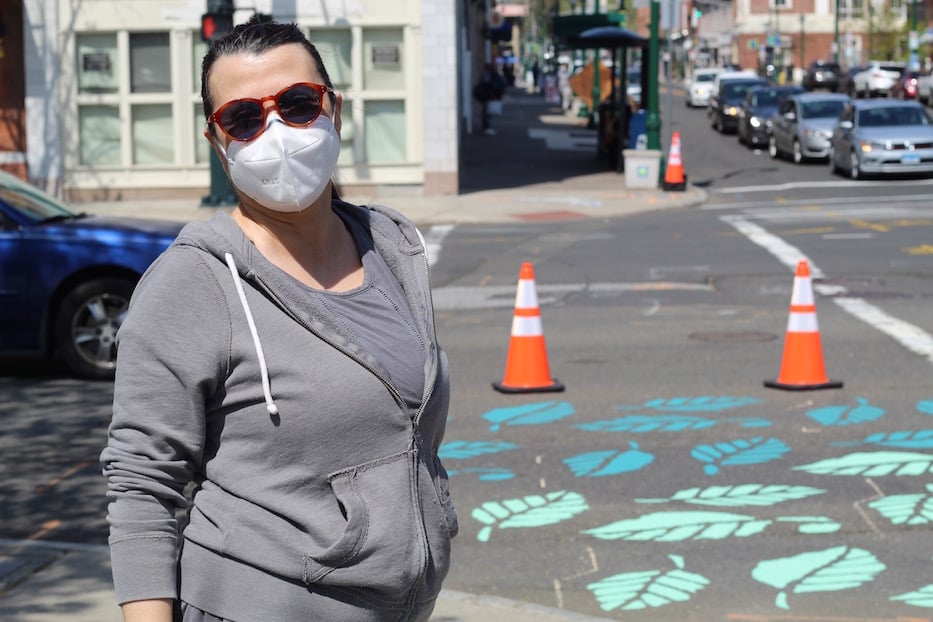 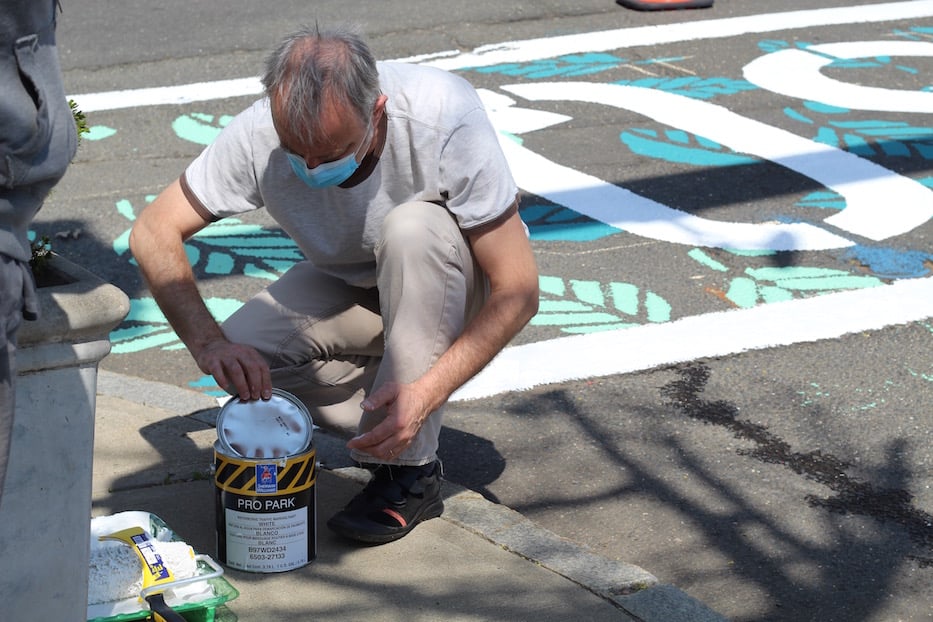 Partners Ileana and Iulian Dumitriu, who are longtime friends of Barac's, came out to paint. Barac and Mead beta tested the design in their backyard patio.

Down Chapel Street, Westvillian Ileana Dumitriu and her husband Iulian helped lay down a second coat of white paint on a huge, angular S and Q, letters that now read WOOSTER SQUARE as they stretch across Chapel Street. As a longtime friend of Barac’s, Dumitriu has watched the project take shape for two years now. Before Saturday’s painting session, Barac and Mead tested out the shapes at her home. She joked that “I now have a permanent piece of New Haven” right in her backyard.

“I love these projects,” she said. “We should do more of these.”

Friends Chris Pedini and Kathy Moore, who live nearby in the Winslow-Celentano Apartments, stopped to admire the leaves before crossing Chapel Street on their way downtown. As pedestrians, both said that they worry about the intersection at Chapel and State Streets. A few weeks ago, Pedini was crossing with her grandchildren when a driver ignored a red light and almost struck her young granddaughter.

Both said they’ve watched as cars, buses, scooters, dirtbikes, and motorcycles turn illegally on red and speed through the lights just before they turn.

“I love it,” said Moore. “It’s something positive for the neighborhood.”

Back over the blossoms, new friends chatted with each other through their masks. Joe Ellis, who is a site supervisor for Town Green, walked back and forth inspecting paint until he found a spot that needed touching up. Last year, he was one of the employees to paint College and then Orange Streets with bright, rainbow colors as the city closed sections of the streets to car traffic. He called it a good thing for New Haven, with the potential to brighten the city. 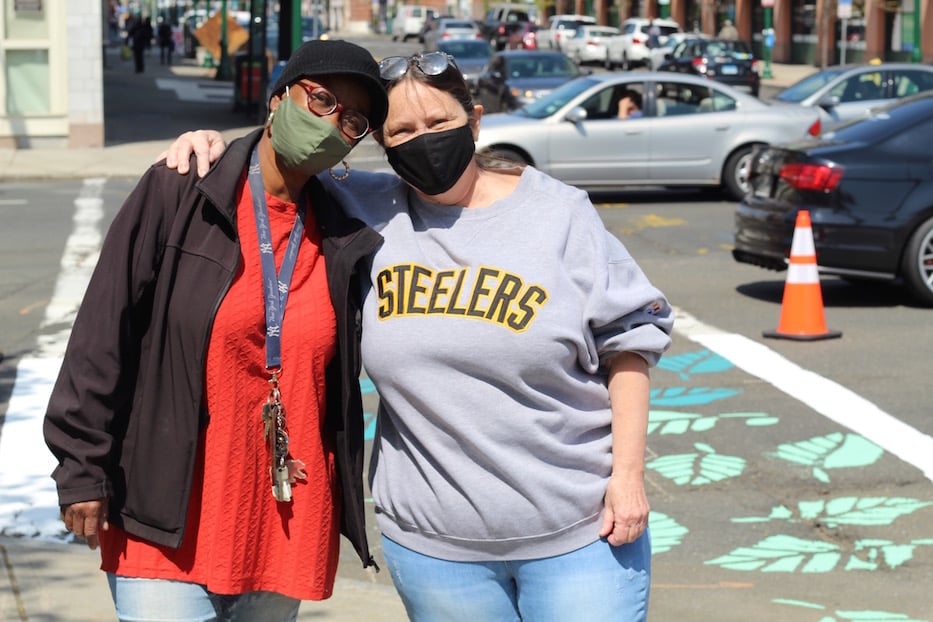 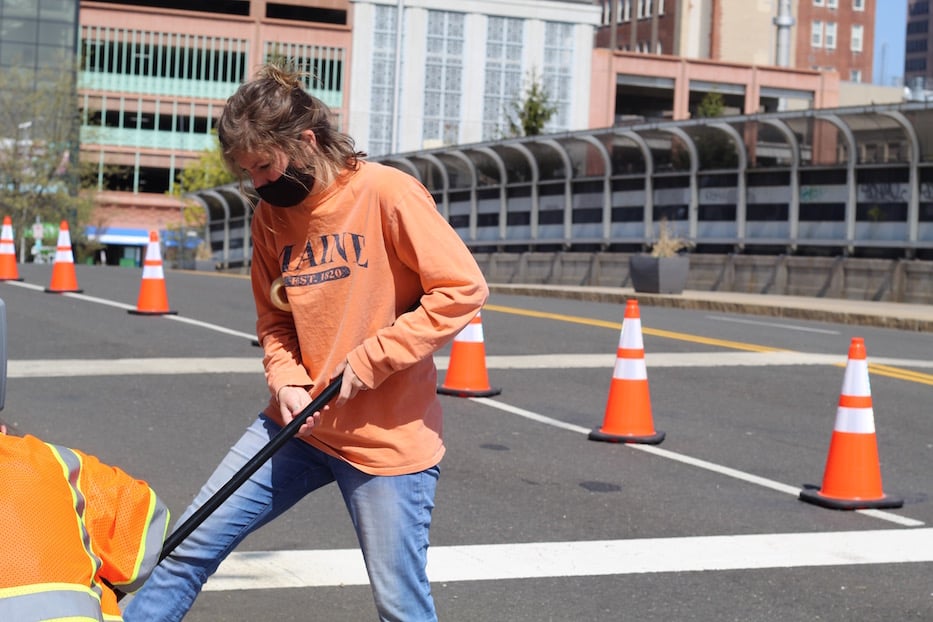 Elizabeth Bickley, manager of public space planning and development with Town Green, said she is thrilled to finally get the project off the ground. Last year, she had hoped to start Intersection to Connection in April, during the annual Wooster Square Cherry Blossom Festival. Then the pandemic hit. In June, members of the Downtown Wooster Square Management Team moved funds from Intersection to Connection to the Downtown Evening Soup Kitchen as food insecurity continued to rise.

A year later, Bickley waved to a few friends and passers-by who scurried up Chapel Street on their way to the weekly farmers' market. A few drivers honked in approval and slowed to watch the painters at work. In past interviews, Bickley has pointed to the project as part of a larger flourishing of public art downtown, including three murals from Town Green in the Ninth Square neighborhood and an installation at City Hall last year. In addition, new murals celebrate the musician Sun Ra and engineer William Lanson in that neighborhood.

“Just to be able to hang out with strangers and wave at people walking by—that’s what’s great about public art,” she said. “It feels awesome.”

Read more about the project here and here. Currently, Town Green and Atelier Cue have scheduled painting over two weekends. Sign up to paint between May 1 and 2 here.