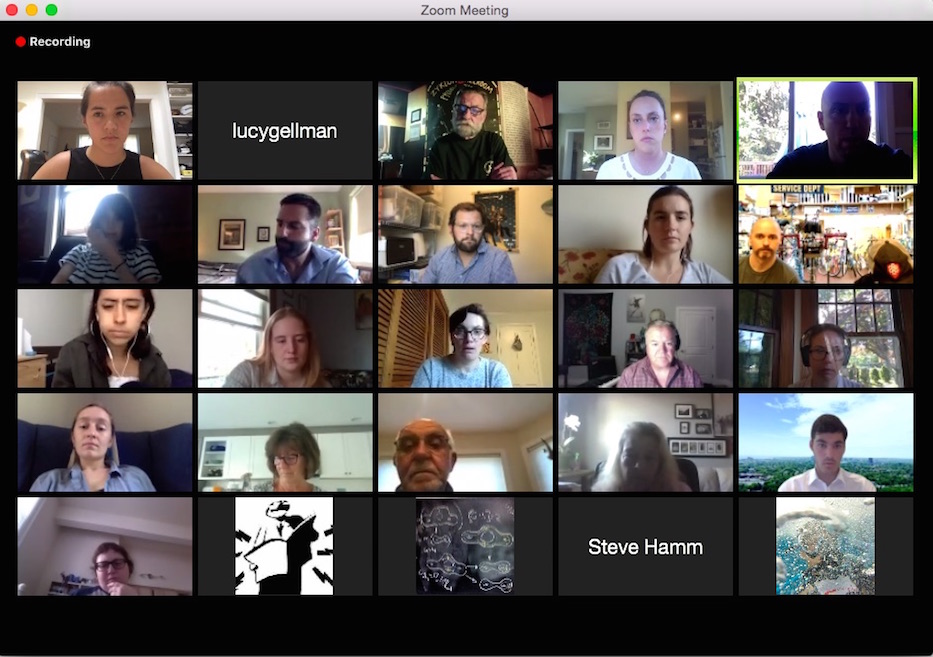 Three public art projects have been moved to the back burner as pandemic-era unemployment, food insecurity, and homelessness skyrocket. In the midst of it, Downtown and Wooster Square neighbors are figuring out how to help.

The Downtown Wooster Square Community Management Team voted on that decision Tuesday evening, as it reallocated $20,000 in city funds from three Ninth Square art projects to the Downtown Evening Soup Kitchen (DESK). The funding comes from the Neighborhood Public Improvement Program, a project of the city’s anti-blight Livable City Initiative (LCI). This will be the final year of NPIP funding: last month it was cut out of the city budget for the 2021 fiscal year.

The meeting was held via Zoom. Close to 40 attended, with some abstaining from the voting portions of the night.

Originally, members of the management team voted to allocate $15,000 to Town Green Special Services District for two different projects, a brightly lit State Street overpass ($7,000) and a painted crosswalk at the same intersection ($8,000). Both are part of “Intersection To Connection,” a three-phase plan for which Town Green has said it will ultimately need $250,000 (read more about that here and here).

Another $5,000 went to Site Projects New Haven for a mural by the Uruguayan artist David de la Mano. The piece was set to commemorate the life and work of engineer William Lanson, a formerly enslaved Black American who built New Haven’s Long Wharf and part of the Farmington Canal. Site Projects initially planned to fly the artist in in the beginning of June, which has not materialized due to COVID-19.

That first vote was held online in mid-March, at the beginning of New Haven’s COVID-19 pandemic (when voting was announced on March 17, schools had not even been closed for an entire week). Over 75 team members and residents voted. Caroline Smith, the team’s chair, has permitted any New Havener who lives or works in the team’s neighborhoods to vote.

Then members of the team’s executive board watched as hunger, homelessness, and unemployment climbed rapidly in the face of a public health crisis. In April, they listened to the city project a $15 million deficit while watching residents’ level of need rise around them. By May, unemployment in New Haven was 1000 percent higher than it had been a year before. The economic burden fell disproportionately on Black and Latinx members of the community, who were also getting sick and dying at a higher rate.

Members of the board also saw fellow community management teams pivot to respond to the growing coronavirus pandemic In April, the Fair Haven Community Management Team voted to redirect $10,000 of funding to personal protective equipment (PPE), while keeping $10,000 for ongoing projects at Gather New Haven (Formerly New Haven Farms and the New Haven Land Trust), Lots of Fish, and Arte, Inc. Earlier this month, members of the Hill North Community Management Team did the same, redirecting $3,000 to mask distribution that will begin on June 20.

“Our city has challenges in a normal year,” said Ian Dunn, a Wooster Square resident and labor organizer who is a member of the team’s executive board. “We’re not gonna just go back to normal. This is going to last a long time. Well after there's a vaccine and everyone's well, there will still be fallout from this. When you think of what we can do, we can keep people alive.”

“What happens when you can't be in a shelter bunking six feet apart from someone?” he added. “Our job is to feed, clothe and house people … I really encourage people to think about this in a really deep way. To really consider what it means to be a neighbor."

Smith added that the executive board had done its research: DESK seemed like a good fit. The organization, which now serves take-away meals to allow for social distancing, is located in the heart of downtown New Haven, close to where the team used to meet at City Hall. For months, it has been working with the Community Soup Kitchen, Loaves & Fishes, and Trinity On The Green as part of the city’s Coordinated Food Access Network (CFAN). For 12 weeks, it has also been a partner on a pantry-to-pantry delivery program. 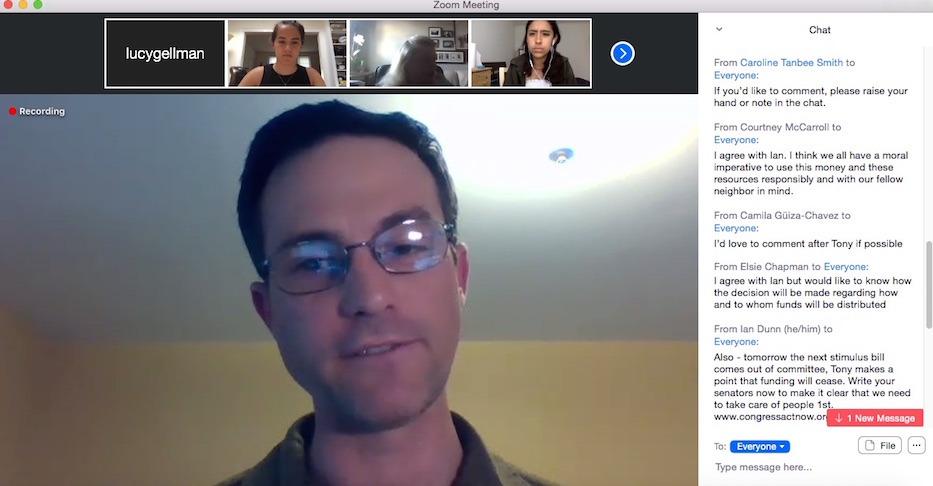 Steve Werlin, the executive director of the organization, described the moment as one of intense need, particularly in terms of food insecurity. Since the beginning of the pandemic, the soup kitchen has seen daily demand grow four-fold (James Cramer, who runs Loaves & Fishes out of the Church of St. Paul and St. James in Wooster Square, has reported the same increase in demand). The kitchen’s resources are constantly stretched—and he expects them to be for a while.

“We should be very proud of what’s happening in New Haven, but as we have said, this is going to be a need for some time,” he said.

Even before Smith opened the floor to voting, there appeared to be overwhelming support for the proposal in the comment thread. She outlined two options: give $10,000 to DESK, which would cut funding for each of the other three projects in half, or donate the full $20,000.

New Haven Urban Design League President Anstress Farwell, who sits on the executive board, explained that both options would require an additional first vote on whether to vote at all. She advocated for the $10,000 allocation, noting the necessity of beauty even in times of crisis.

Tony Kosloski, a Wooster Square artist who is also on the executive board, pushed for the $20,000. He suggested the choice was simple. Public art is great. People are more important.

“By August, programs will start to fall away, and we’ll see the imminent collapse of the economy,” he said. “One thinks that at some point, the basic needs of people aren't taken care of. I think the thing to do is think about people and not doing projects.”

Camila Güiza-Chavez, who works with the nonprofit Havenly out of Sweet Mary’s Bakery downtown, also praised the proposal to reallocate the full amount. Earlier this year, the organization switched its focus from small-scale commercial production of sweets entirely to food distribution. In giving out hundreds of meals each week, she said she has seen firsthand the “astronomical amount of need” in the city.

“It has revealed to us as an organization how much of a need there is,” she said.

Voting itself, perhaps, was a more arduous process than the reallocation of funds. Under Farwell's guidance, attendees learned that they would need to vote twice: once on the motion to reverse their earlier vote, and a second time on whether to give $10,000 or $20,000.

Before the second vote, Town Green Executive Director Win Davis was the only person to raise significant concern over the reallocation. Coming in and out of the meeting on a crackly connection, he explained that Town Green was already working on the projects, with the understanding that it had secured the funding in late March.

“That funding was pretty important to us,” he said. He honed in on the projects' community focus, including an invitation for residents to paint the crosswalks. In response, Güiza-Chavez urged him to consider the rise of food and housing insecurity in the city.

She had no doubt that the projects were meaningful and community-oriented, she added. But “they can't be weighed in the same way."

Smith added that the team is still committed to working with Town Green and Site Projects “in any way we can.”

“We think those projects are gorgeous and important,” she said.

Laura Clarke, executive director of Site Projects, sent a follow-up email Friday morning noting that she was disappointed in the decision but did not oppose it. She said the organization now hopes to begin the project Aug. 19 and finish it by Sept. 5. Staff and board have created a fundraising campaign to cover the $5,000 they thought they had secured. In part, that will depend on whether De La Mano is able to leave Uruguay due to COVID-19 airport closures.

"Site projects hoped that the DWSCMT would not rescind all of our award," she wrote in an email. " We were fully expecting to get a reduction but losing the total amount has knocked the wind out of our sails. We are a small nonprofit and we only fund-raise on a project-by-project basis.  We were cutting the mural project budget very close."

"All of the staff and Board of Directors are supporters of measures that work to alleviate the misery and desperation that the pandemic has caused," she added. "But still we are disappointed."