A Tree Grows At Betsy Ross 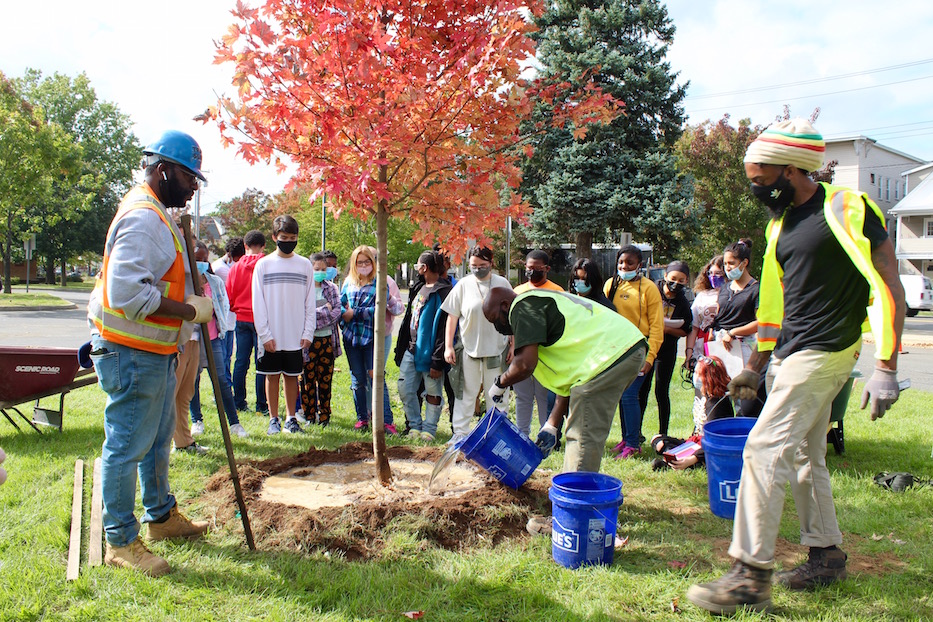 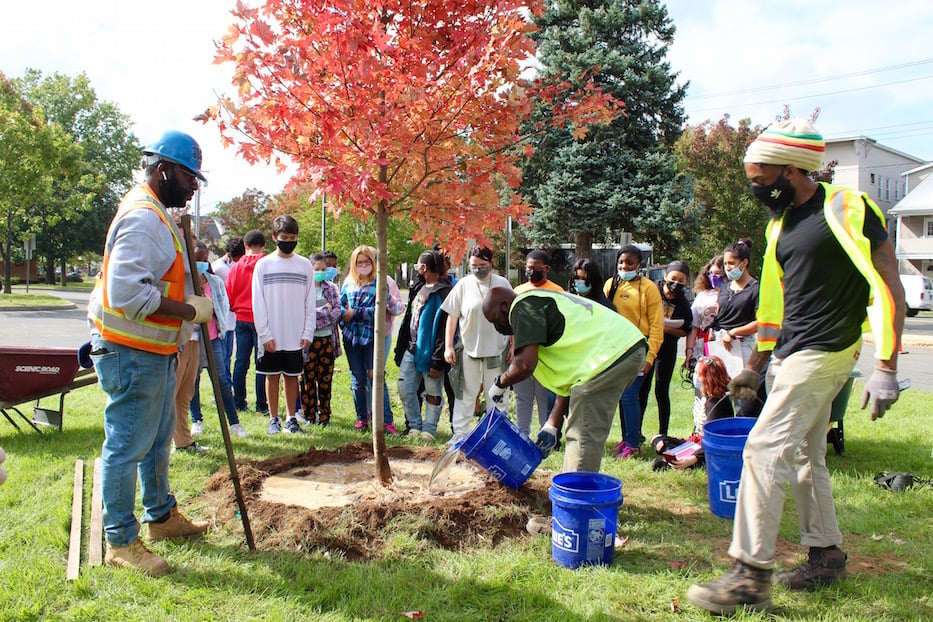 Eighth grader Valerie Riley read in a clear voice, the words sailing over a grassy island and into the parking lot. Trees offer to those that love them/A message of peace and rest/They bring the glow of the setting sun/As it vanishes West.

Yards away, William Tisdale placed his hands on the bark of a red maple, right where a patch of sunlight had fallen. He looked over its spindly branches, veined leaves and wrapped roots. As he and a crew pushed the tree upright, four dozen pairs of young eyes followed their every move.

Wednesday morning, students at Betsy Ross Arts Magnet School welcomed members of the Urban Resources Initiative (URI) with poetry, string music, and a short dedication ceremony as they arrived to plant a red maple in the school’s parking lot. The program is part of “Growing Together Into the Future,” a partnership between URI and the New Haven Public Schools (NHPS) that plants trees across the district.

Greenskills Manager Caroline Scanlan said that URI has received an order for 80 trees for the program. At Betsy Ross, the short dedication marked the school’s first live performance in over 18 months. 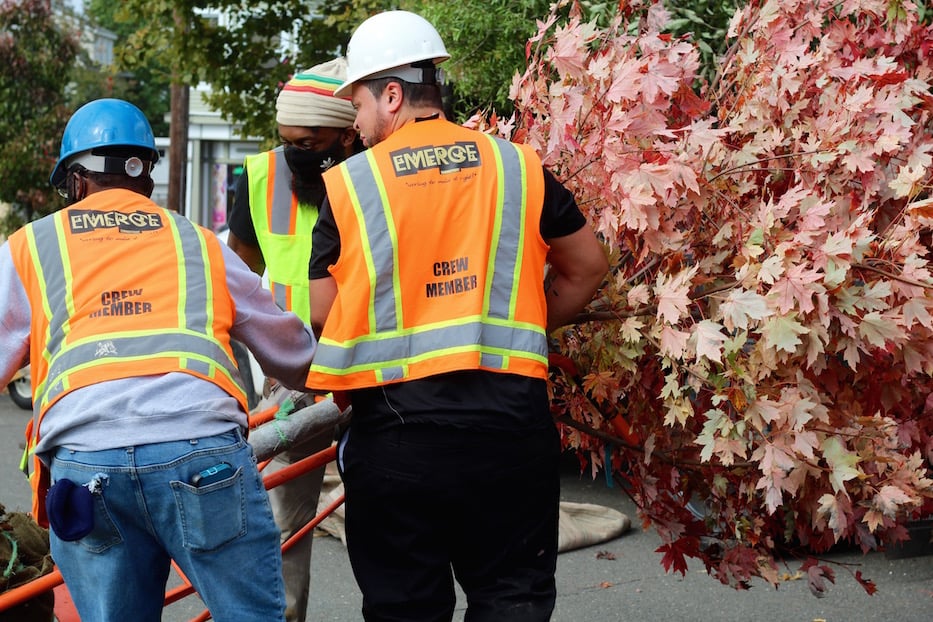 “We want to be able to honor all the struggle and the sacrifices that teachers and students have made” in the past year and a half, Scanlan said Wednesday, as a crew from URI and Emerge unloaded the tree. As she spoke, three theater kids who had been rehearsing for the event watched the new, strange sort of arborist ballet unfolding outside of their school. Cars whizzed by on Kimberly Avenue, unaware.

The preparation for the planting began months ago, when visual arts teacher Maura Galante spotted an email about the Growing Together program, and started working to get the school involved. Galante, a Hamdenite who described herself as a “rabid gardener,” connected with Scanlan just as the school was going into its summer vacation. It marked the end to the most unconventional year Betsy Ross has had, from virtual classes and after-school clubs to a pivot back to in-school and hybrid learning.

In June, the two met at the school and walked around its campus, a large, squat brick building that sits just off Kimberly Avenue in the city’s Hill neighborhood. Galante showed Scanlan a small, grassy island, where two tree stumps stick out of the ground like old scabs. Both were destroyed in a tropical storm years ago, said Betsy Ross Arts Coordinator Sylvia Petriccione. 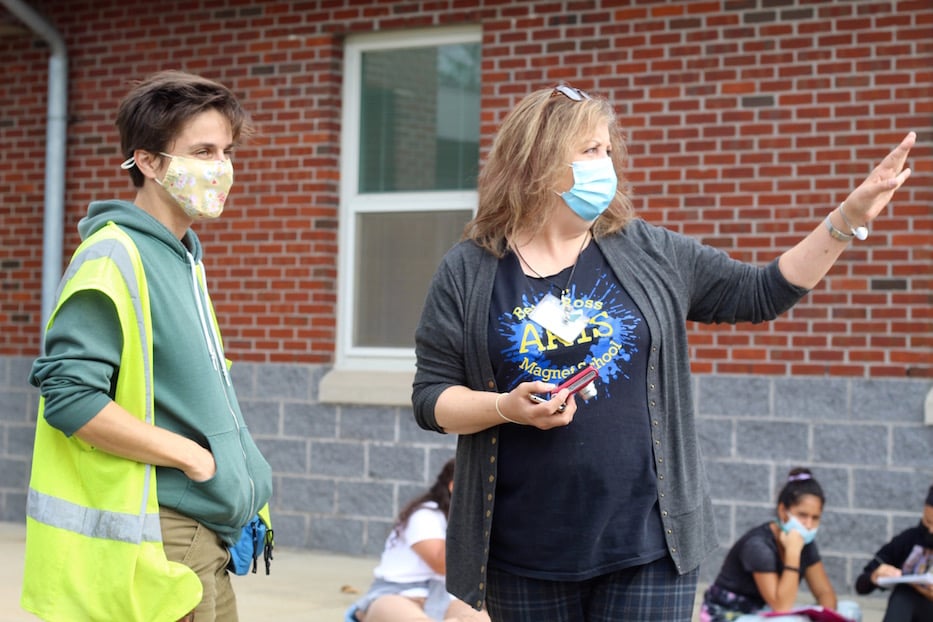 The space, which looked like an open wound, was all but calling out for a new tree. In addition to the red maple, URI has planted three flowering cherry trees that sit along the side of the school building. Students will have to wait until the spring to see them burst into bloom.

Wednesday, students and teachers poured out into the sunlight as a truck from URI rolled into the driveway. String students practiced a new arrangement of “Oye Como Va” just in time for the end of Hispanic Heritage Month. In the parking lot, videography students set up a tripod, buzzing nervously around a camera. Art students brought out stationary that they had prepared for URI, painted with thickly-leaved, oxblood-colored trees at the height of fall.

A few feet from the building’s front doors, eighth graders Valerie Riley, Louis Apuzzo and Victoria Rioux practiced Lenore Hetrick’s “The Gift of the Tree” one final time before the dedication. They kept their eye on URI’s biggest truck, where the maple had emerged dramatically from beneath a brown burlap covering. Rioux, who lives in Madison, said she was grateful for the chance to perform outdoors, away from the harsh lights of the school’s stage. 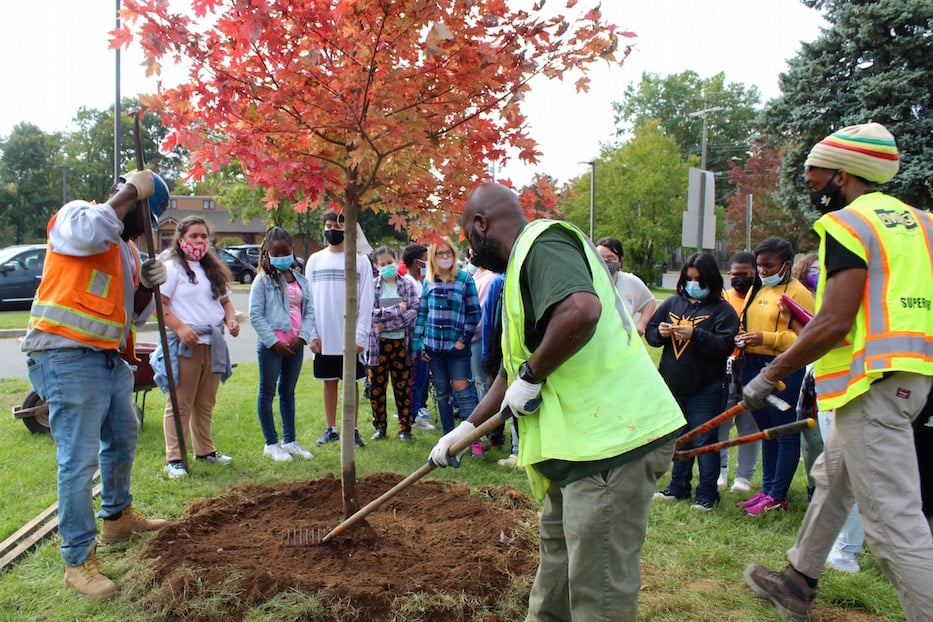 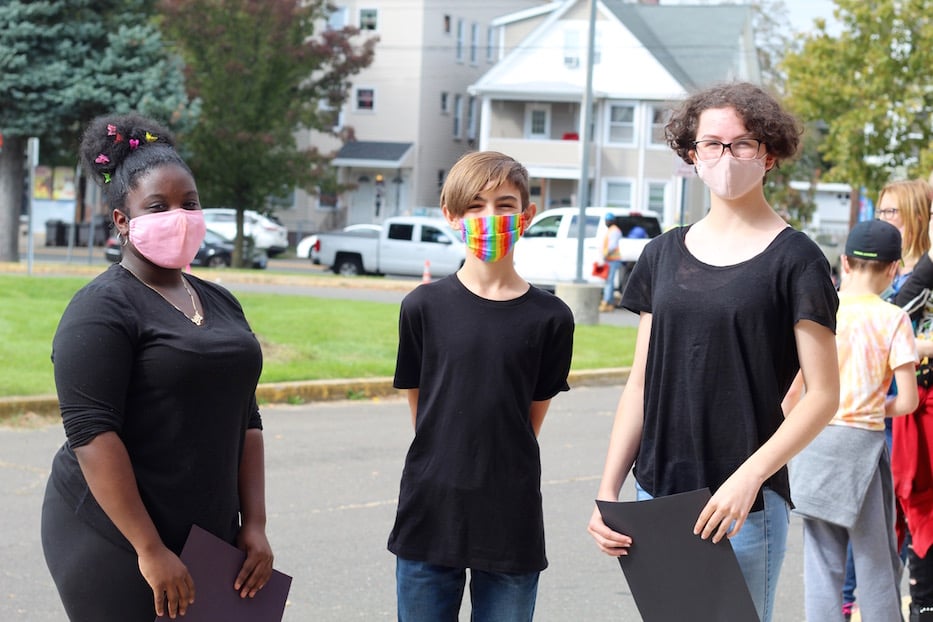 From left to right: Valerie Riley, Louis Apuzzo and Victoria Rioux. All are eighth graders studying theater at the school.

“It’s very exciting,” Apuzzo said. “It's really nice to be out in nature, to have the breeze—it’s more calming.”

For all of them, nature became a coping mechanism when schools shuttered last March. During the early stages of the pandemic, Apuzzo recalled slipping outside barefoot, and walking through his yard in Meriden. Sometimes, he would just sit and listen to the birds chattering and the wind whispering in the trees. Riley, who lives in a wooded area of Guilford, went for walks. Rioux started going on hikes with her mom and stepdad.

“I just feel like you could watch a tree all day and not get bored,” Apuzzo said.

Both Riley and Rioux agreed. Rioux said she'd like to see more trees, which pull carbon dioxide out of the atmosphere and release oxygen in its place, in both the city and the world more broadly. “I feel like trees are one of the things we need more of,” she said. She’s glad to see Betsy Ross playing a small part in that. 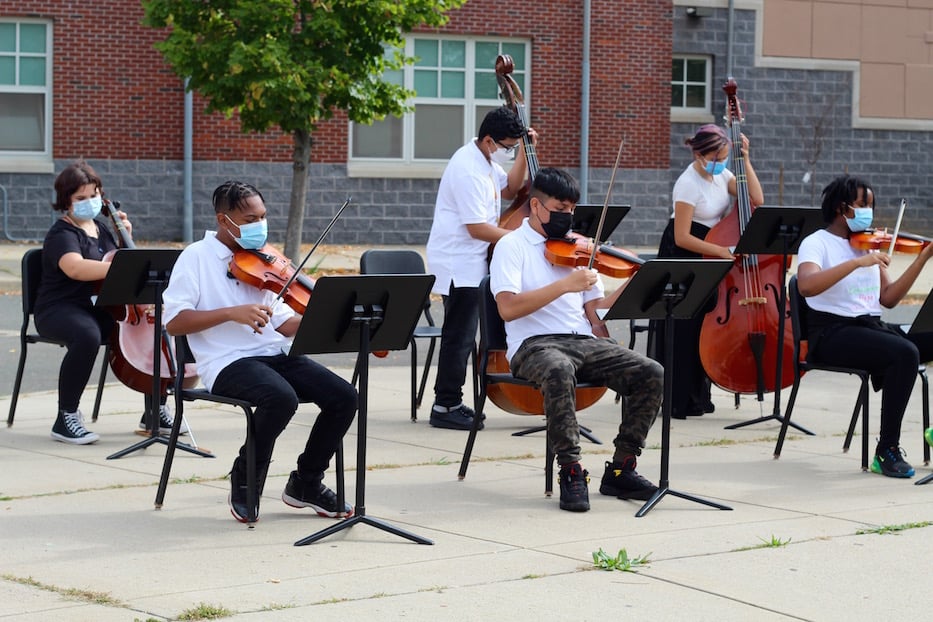 No sooner had they spoken than an orange-vested crew began to unload the tree, lifting it onto a large dolly for transport across the lot. For Tisdale, a field crew representative with URI, the moment marked a sort of return to his educational roots. The lifelong New Havener attended Betsy Ross before it was an arts magnet school, when the building was still on Barnes Avenue. It became an arts magnet roughly three decades ago.

“This is about new life,” he said as crew members created a shallow, U-shaped pit for the maple. “This tree is going to do good here. This tree, as long as people take care of it, is going to give back.”

On a walkway-turned-stage, Apuzzo became the masked master of ceremonies. Strings instructor Henry Lugo lifted his hands, and the first strains of Paul Lavender’s “Majestic March” floated over the parking lot. The young videographers drifted closer, steading their camera as they zoomed in on performers. Minutes later, poetry bloomed across the asphalt, reaching sun-soaked ears as a small crowd gathered to listen. 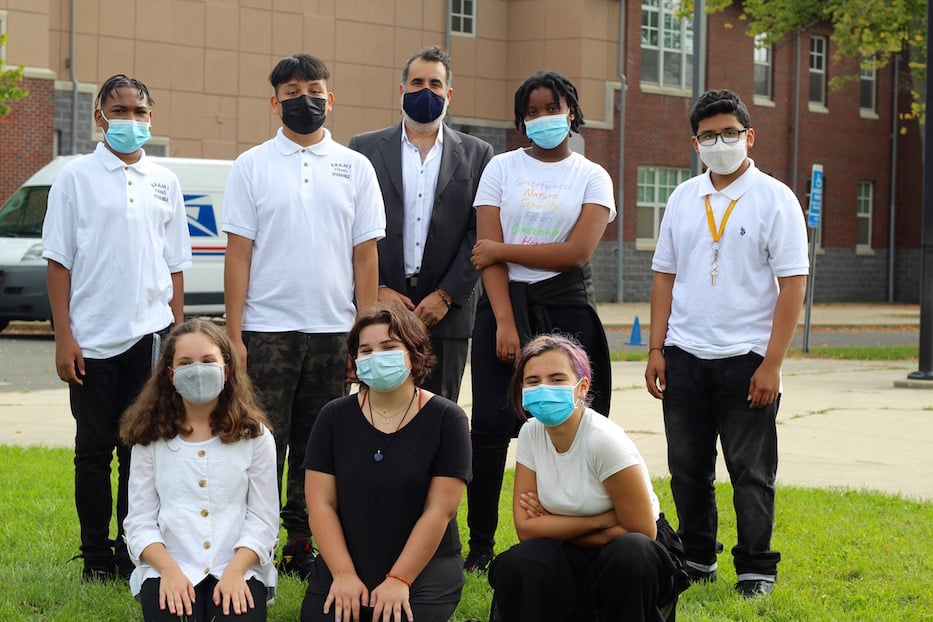 Lugo with seventh and eighth grade string orchestra members. Giovanni Garcia, who called the dedication a "celebration of new life, is pictured in the top row at the left.

Students flowed into new repertoire, fêting not just the tree but also Hispanic Heritage Month. This year, Lugo wrote an arrangement for Tito Puente’s celebrated “Oye Como Va,” part of his attempt to create a more culturally responsive strings curriculum at the school. As students played, a few of their classmates kept time, nodding their heads and moving their shoulders to the music. Over at the tree, the music scored crew members as they got the tree squarely into the ground and created a donut-shaped ring of soil around it.

Jay'den Moore, a seventh grader learning violin at the school, said she was moved by the event. Growing up in New Haven, she’s learned to love nature—from the trees on her street to the rain and wind on her face when she rolls down the car windows.  During the pandemic’s lockdown period, she stayed largely inside, she said. But she loves fall foliage, particularly the rusty reds, oranges and purples that fill the city this time of year.

"It's a celebration of new life," chimed in Giovanni Garcia, an eighth grader who plays viola in the school’s string orchestra.

After the dedication, he watched as peers scrambled over to the tree. Tisdale sprinkled wood chips over the soil, joking that they were the sprinkles on the soil donut that he had just created to protect the tree. He hauled over buckets of water, releasing them into the thirsty earth. A few students suggested names, coming close to look at the leaves as they lifted high into the air and pointed skyward. The tree was home.

To see more from the event, watch the video above.