At Nathan Hale, A Masked Moana Knows The Way 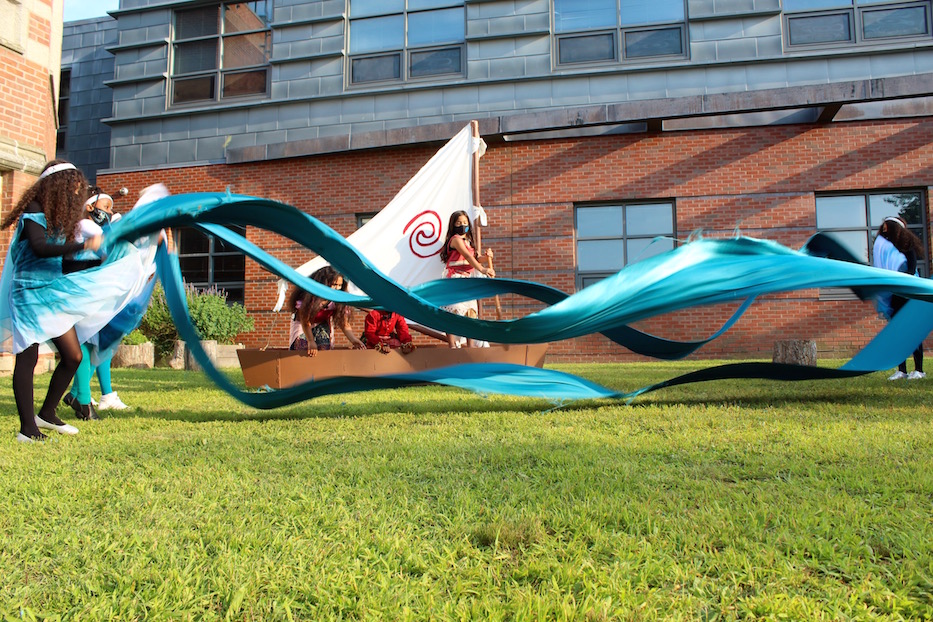 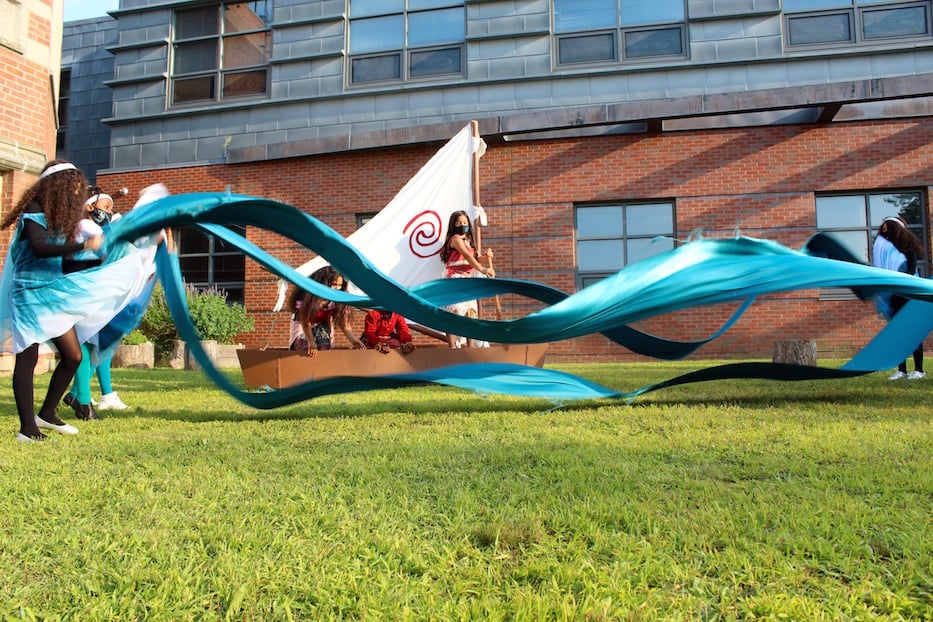 Moana looked out onto the water, her eyes narrowed. Waves rolled and crested before her, shimmering blue in the evening sun. Beside her, the demigod Maui was still grieving the absence of his shape-shifting powers. The ocean sang back at them, its voice high and clear. She took a long breath, and steered the boat into a sharp turn. The audience was no longer on the Long Island Sound, but on the open waters of the Pacific Ocean.

Friday and again on Saturday, Polynesia came to the East Shore during a masked, pandemic-proofed and socially distanced summer run of Moana, Jr. at Nathan Hale School. For weeks, 35 students have been rehearsing the show as part of the New Haven’s "Summer of Fun," a citywide initiative that uses federal funding from the American Rescue Plan to make sure students can go to summer camp for free.  By its end, the performance told the story of not just one heroine’s resistance, but an entire community’s.

“It feels amazing,” said Director Briana Bellinger-Dawson, a dance teacher at Nathan Hale who co-produced the play with Nathan Hale Principal Tara Cass. “Putting a musical together, let alone a play—it’s a lot for them. But they did it.”

Known for its earwormy score from Lin-Manuel Miranda and Opetaia Foa’i, Moana tells the story of Moana (Nora Gilo-Tomkins), the gutsy daughter of Sina (Nadya Jones) and Chief Tui (Caly Nyack) on the self-sufficient island of ​​Motunui. After environmental disaster strikes the island, Moana disobeys her parents and takes to the open seas on a mission to find the demigod Maui (Jermaine Cowan), return the heart of goddess-turned-demon Ti Fiti (Alayna Capriglione), smash the patriarchy and save her people. All in a day’s work.

Along the way, the work folds in ancestor worship (a shout out to Gramma Tala, played by the intrepid Mikayla Williams), trickster mythology, oral history and storytelling, climate preservation, and music that is so buoyant it feels like a life raft.

As it opened Friday, electricity buzzed through the evening air, channeling the same magic on which the musical is built. Families settled in across the school’s field, setting out folding chairs, snacks and bottles of water. Some milled around masked and reconnected after months away; others rehashed the show’s plot with their kids before the work began. From somewhere offstage, a mic crackled to life, and then another. A chorus of high, wispy voices floated on the breeze into the crowd. 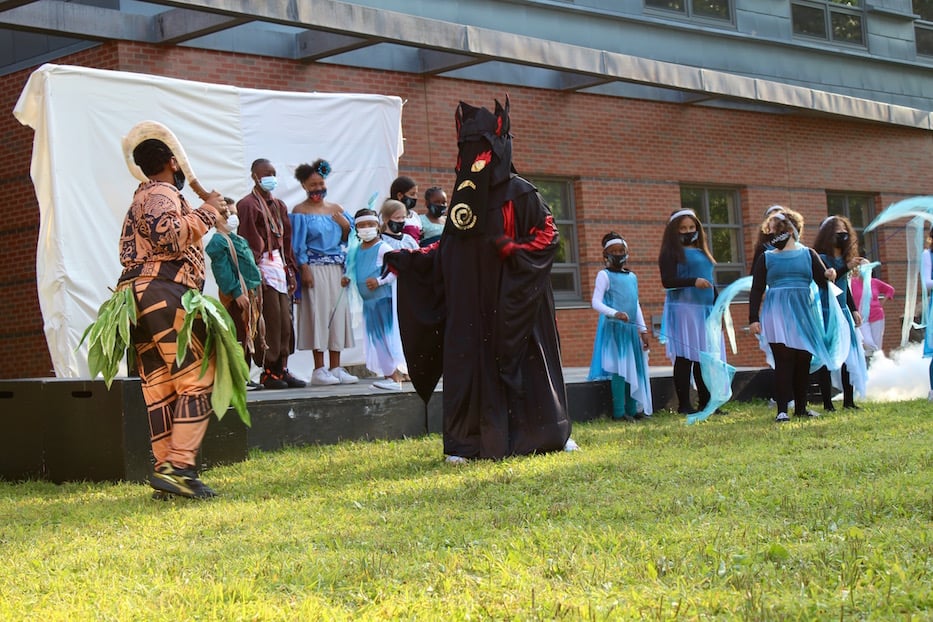 Suddenly, pint-sized characters were spreading out across the lawn-turned-stage, some standing on tree stumps as others turned the space into a live ocean, dancing in a blur of silver and blue. Families oohed and mmmmed audibly at actors’ raffia skirts, shiny blue and purple dresses and tulle skirts, headdresses modeled on Tahitian regalia, and a two-piece costume meant to pay homage to Maui’s intricate tattoos.

Instead of falling to a hush, attendees interacted with the actors. They glowered and gasped at Te Kā (Alayna Capriglione), a fiery demon whose mere presence made characters shrink back and make their bodies small and compact. They murmured at Gramma Tala, the self-described “village crazy lady” who was not so crazy at all. When Gilo-Tomkins took the stage, it was as if the audience took a collective exhale, and sank into the show. Moments later, they were singing along as the ocean rose up to greet her and the play flowed forward.

Masked from nose to chin—most are too young to be vaccinated, and the camp has operated with masks all summer—actors learned to communicate with their eyes between lines. From atop a tree trunk, a tiny ensemble member waved her fingers and wrists through the air, as if she was conducting the prerecorded orchestra. During his introductory song “You’re Welcome,” Cowan hammed it up as Maui, swaying at the hips and flexing his arms before a socially distanced kick line. 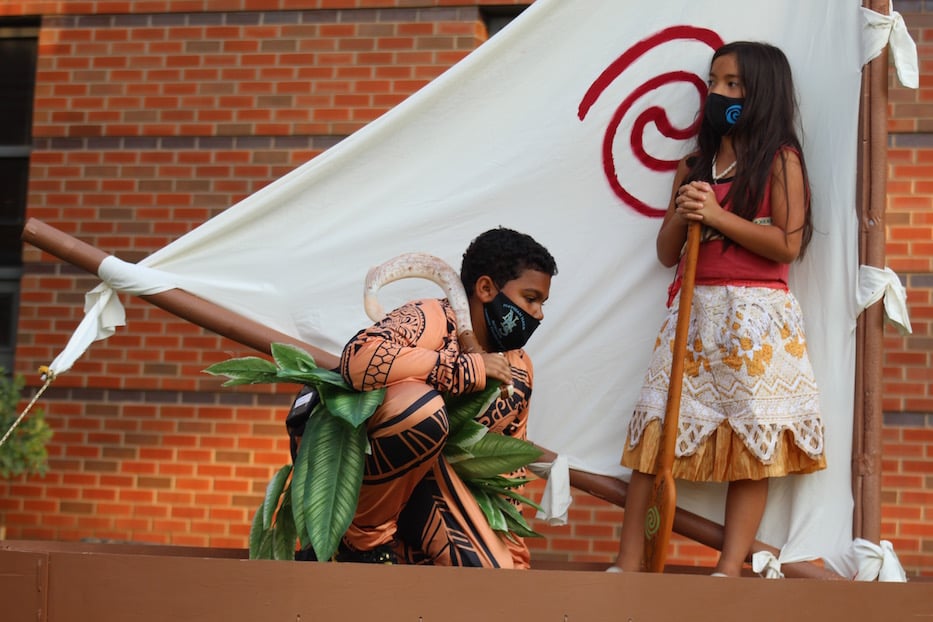 Jermaine Cowan as Maui and Nora Gilo-Tomkins as Moana.

As Gilo-Tomkins commandeered a construction paper and cardboard wa'a kaulua with a fabric sail, kids and parents alike began to cheer her on. With every note, she mapped the story onto 2021: a young woman fights an environmental scourge—and her parents’ headstrong pushback and skepticism—in order to save the people who are closest to her. In the process, she finds an unlikely community, from the tricky and jubilant rooster Hei Hei (Amiel Johnson) and Maui to the water itself.

Friday, she didn’t do any of it alone: ensemble members filled the stage in bright costumes, some controlling the ocean with pairs of tiny, synchronized hands. When Williams’ mic cut out unexpectedly in the middle of a song, she belted, her voice clear as a bell. Rohn William Heggie entered in a pink, plush crab suit and sunglasses with an entourage, and audience members shrieked and clapped with delight.

“It’s TAMATOA!” cried one of the audience’s youngest members from the front row. And then again a little louder, as though the audience did not understand the weight of the moment, “It! Is! Tam-a-toaaaaaa!” 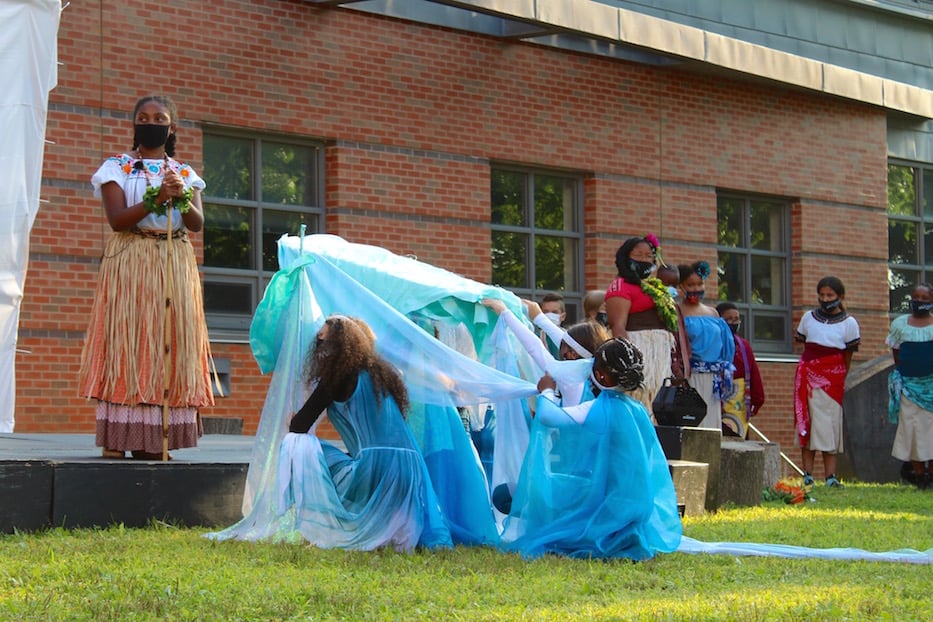 Gramma Tala, played by the intrepid Mikayla Williams, and members of the ocean ensemble.

The performance—one of the first for New Haven students in almost two years—transformed the sprawling field into a high-stakes, magical voyage on the Pacific, complete with a belching smoke machine and huge, rainbow-tinted bubbles that bounced around characters’ heads.

Actors, who ranged from six to 14 years old, mined the performance for its humor—and also shouldered the weight of a year in which gathering to sing and dance is still a rarity. When Gramma Tala crossed the veil, it was hard not to think of the hundreds of New Haveners who were missing from the audience, from family members to Manny Rivera to Ms. Edi, the beloved arts educator Martha Edith Jackson-Hanjra who passed away last week at the age of 69.

The show’s existence itself was also a story of navigation, magic, and quiet heroism from the women who willed it into being. Over a year ago, Bellinger-Dawson secured the rights to Moana, Jr. just months before the pandemic hit. As Covid-19 shut down schools and forced classes online, she and Cass braved the pandemic pivot, bringing students remote dance lessons, virtual bedtime stories, and remote and hybrid classes. The show went on the back burner. 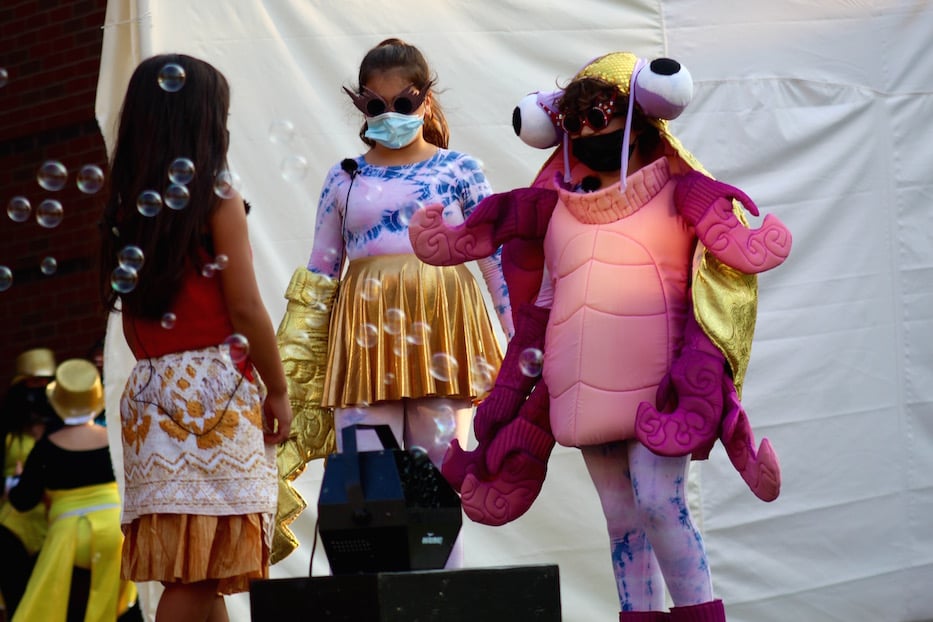 When they started talking about a summer 2021 performance, they worried they would have to charge parents to offset the cost of camp and costumes, Bellinger-Dawson said. Then ARTE, Inc. Co-Founders David Greco and Daniel Diaz and the New Haven Board of Education stepped in. They explained that New Haven’s “Summer of Fun,” supported by federal dollars from the $1.9 trillion American Rescue Plan, meant that students could attend free of charge.

New Haven high schoolers, several of whom are Nathan Hale alumni, jumped on as paid crew members. To keep groups small and socially distanced, Bellinger-Dawson split students into a crafting section to build and paint smaller set pieces, a choreography and dance section, and a music section. Stage Manager Roxy Virtue, a rising junior at Wilbur Cross, said that she returned to give back to the place that taught her so much about theater.

“It feels fantastic for us to be able to do this safely,” Cass said. “They haven’t had a performance in over a year. Them yelling at the end is everything.” 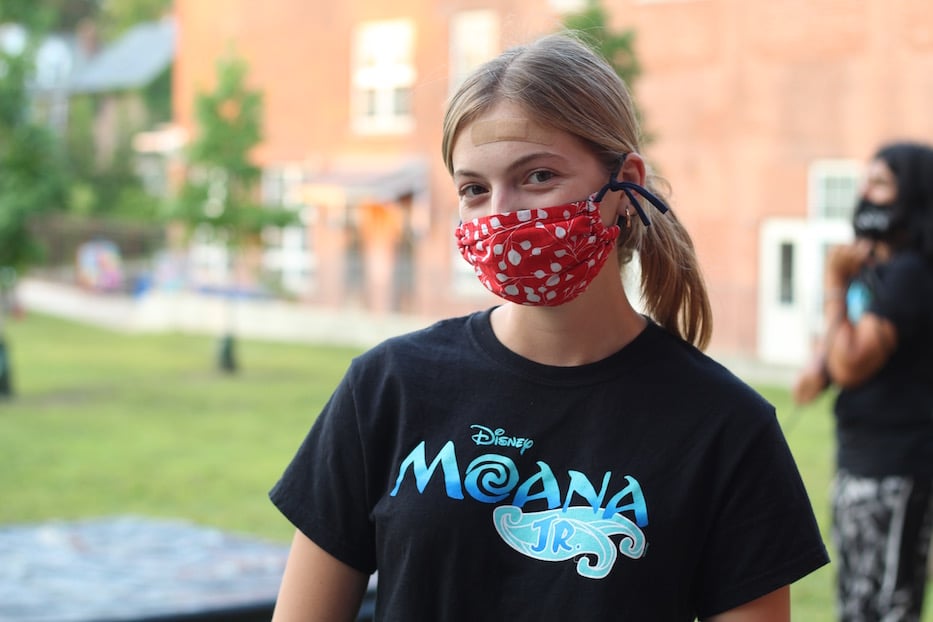 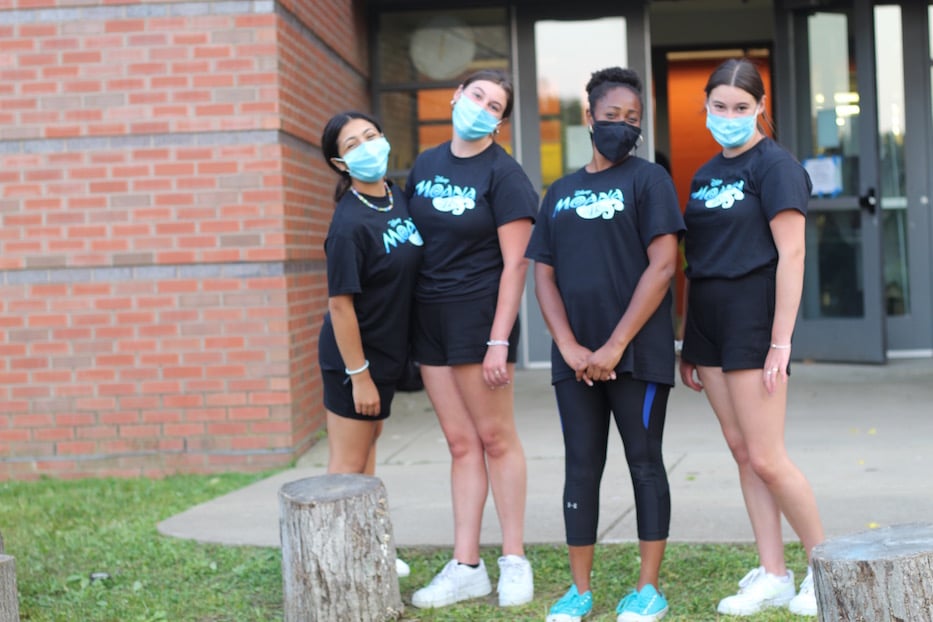 It’s also a template for what schools can do with federal funding for the arts. After Friday’s performance, Gilo-Tomkins said that the role has helped her mentally prepare for the school year, and not just because she’ll be returning to the classroom in a mask.

As a rising fourth grader at Edgewood School, she’s “a little bit scared” about how much harder her math lessons will be this year. The play, during which she memorized her lines in just under three weeks, was a wake-up call that she can conquer anything she sets her mind to.

“It was stressful, and it was a lot of work,” she said of the play. “It taught me that it’s ok to be scared, and it’s ok to miss your steps sometimes, you just keep going.”

Of the audience, she added that the lessons from the play are meant for people of all ages.

“They can learn that girls can lead the way,” she said.