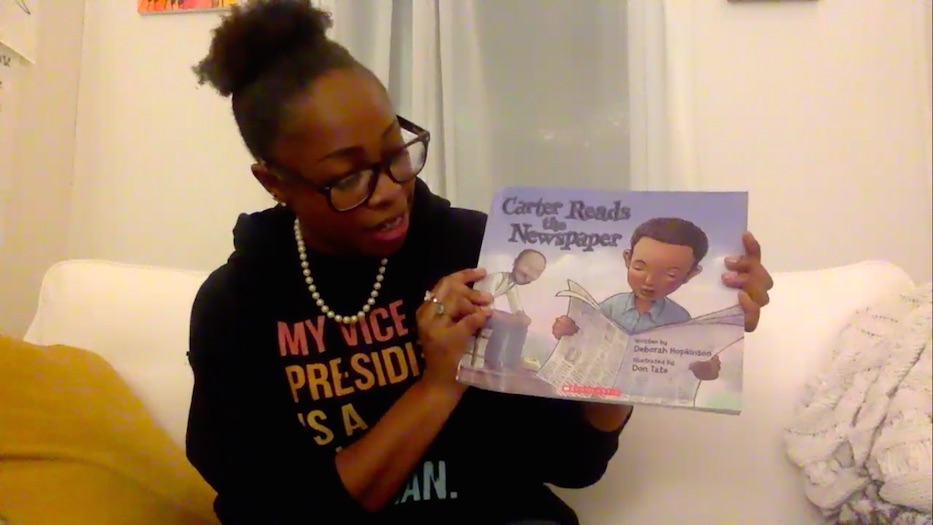 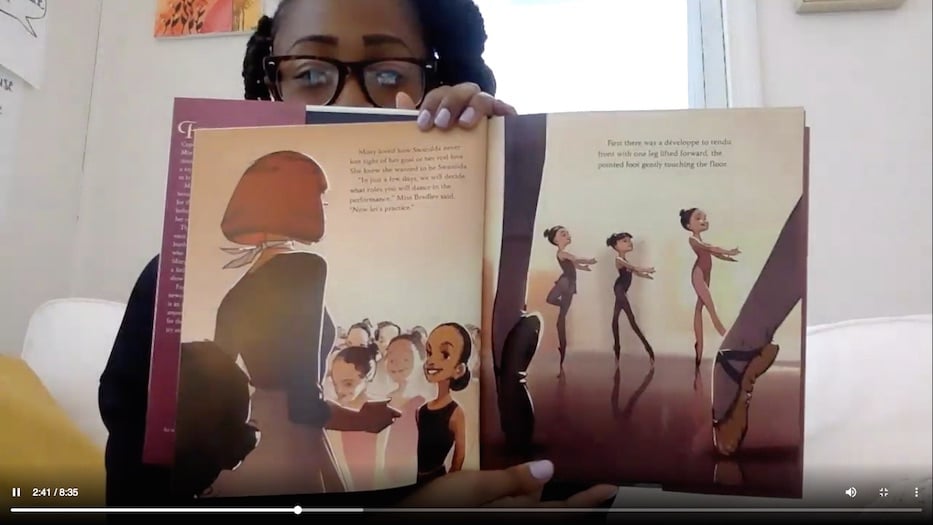 Misty Copeland cannot stop dreaming about the ballet Coppélia. In class, she carefully learns the steps to embody the character Swanilda, who imitates a mechanical doll to fool her boyfriend Franz. Out of class, the young dancer practices the steps until she can do them in her sleep. On the night of the performance, she pulls on her ballet slippers and whirls gracefully onto the stage. The curtain opens on the rest of her life.

Copeland’s story Bunheads has gained a local audience thanks to Briana Dawson, a dance and drama teacher at Nathan Hale School in the city’s East Shore neighborhood. This month, she is leading “Black History Month Daily Book,” a project dedicated to untold and under-told Black stories. After launching the initiative earlier this month, she and Principal Tara Cass have invited other teachers to lend their voices to the effort.

“We've been talking about a lot of figures in Black history that kids don't know about,” Dawson said. “We have a lot of literature that's beautiful, but we need to show all colors when we’re reading it. It warms my heart, because they're learning.”

Each video takes readers into a different book, opening new worlds in the process. At the beginning of the month, Dawson started the series with Deborah Hopkinson and Don Tate’s Carter Reads The Newspaper, an illustrated story of Black History Month founder Carter G. Woodson. Fourth grade teacher Kevin Flanigan brought students I Am Perfectly Designed, an “ode to loving who you are, exactly as you are” by father-son duo Karamo and Jason “Rachel” Brown. Cass joined in with Ibram X. Kendi’s Antiracist Baby, a book that she reads with her own children at home. She said the series has been a hit with her kids, who are two and seven.

“During Black History Month, it’s typical that we celebrate Black people and Black culture and Black excellence, but as a white woman, an Irish-American woman, I think it’s important that every day I choose anti-racism,” she said before reading Kendi’s book. “And that I raise anti-racist children and I lead an anti-racist school community.” 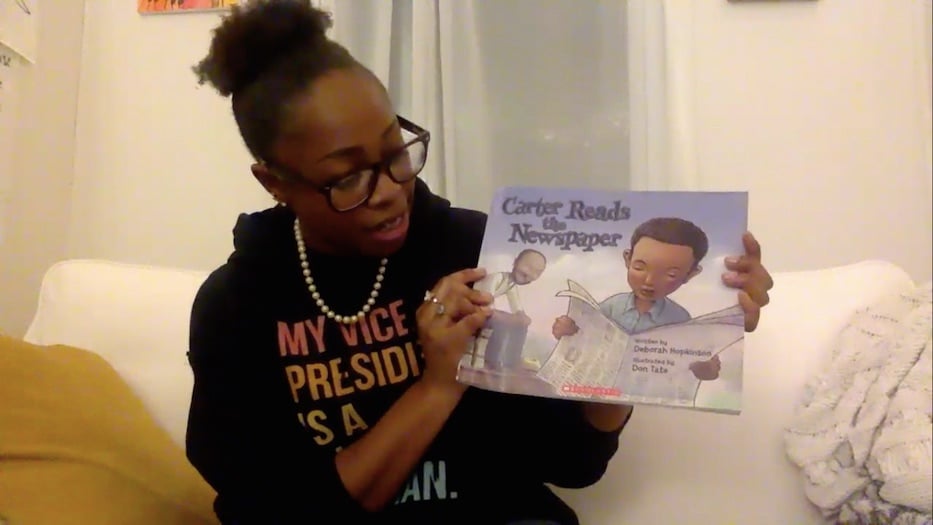 Other selections dip into the histories of Barack Obama, Ruby Bridges, Duke Ellington and Trombone Shorty. With Lupita Nyong’o Sulwe, Dawson added a lesson on colorism. With Matthew Cherry’s Hair Love, Spanish teacher Trudy Anderson taught students to love and respect natural hair. In the videos, some teachers go right into their books. Others are candid, with unexpected preamble and greetings to the students listening at home.

Dawson—or as she introduces herself, Ms. B—is a constant, calming presence on the page, which is run through the online platform Padlet. She rocks t-shirts honoring Kamala Harris’ vice presidency, Black ballerinas, Jean-Michel Basquiat and quotes from Maxine Waters and Nelson Mandela. Early in the month, she looked to Bunheads to teach students the story of Misty Copeland, the first Black woman to become principal dancer at the American Ballet Theatre (Arthur Mitchell became its first Black principal dancer in 1962; no Black women held that role until Copeland in 2015). More recently, she celebrated natural hair with Derrick Barnes’ Crown: An Ode To The Fresh Cut.

“We have so many teachers now who are recording themselves and reading their books,” she said. “It's also like a bedtime story.”

Cass said she was excited when Dawson proposed the idea earlier this year. The two have known each other since Dawson was a student at Cooperative Arts & Humanities High School, where Cass taught English before coming to Nathan Hale. When she was still teaching there, she made sure that her literature students had a chance to read Black authors including James Baldwin, Richard Wright, Audre Lorde, Toni Morrison and others, “to make sure that they knew that it wasn’t just white men.”

Since coming to Nathan Hale eight years ago, she’s been working on building a culturally responsive staff and student body. Last February, the school marked Black History Month with an assembly. Black History Month facts that crackled over the speaker each day. Dawson remembered it as feeling like a win for both students and faculty.

Then coronavirus hit New Haven, sending public schools online for almost 11 full months. A year later, elementary school students have just started to return to their classrooms in the midst of Covid-19 and a national reckoning around white supremacy. Dawson, who is considered a “specials” teacher, now comes into the school but still teaches her students remotely.

“One of our focuses is to make sure that we are celebrating Black history, Black people, and our Black population more often,” Cass said. “I’m making sure that I’m hiring more teachers of color. Last year, we had such an amazing celebration. This year, I was like, ‘We can’t assemble.’ So how do we celebrate Black people and Black culture and Black history online?”

Dawson came to her with armfuls of books that she reads at home with her son A.J., who is a student at Nathan Hale. She and Cass did contact-free distribution to some of their colleagues, and encouraged fellow staff members to join in. Cass said that she sees it as part of creating a culturally inclusive curriculum and school—books that center Black characters are important for all kids to read. They’re important for parents, too. 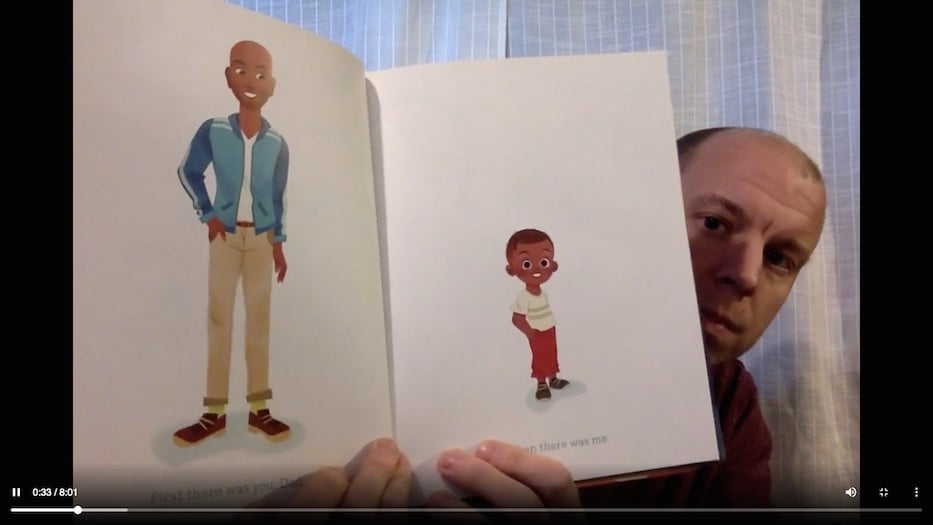 Kevin Flanigan reads I Am Perfectly Designed, an “ode to loving who you are, exactly as you are” by father-son duo Karamo and Jason “Rachel” Brown.

For Dawson, the project has been both months and years in the making. Born and raised in New Haven, she attended Helene Grant School when Jeffie Frazier was the principal there. Students opened all-school assemblies with “Lift Every Voice and Sing” no matter what month it was. They held an annual “Who Am I?” day as part of Black History Month, during which students dressed as figures in Black history and gave presentations that reached beyond Martin Luther King and Harriet Tubman. Dawson said it was only later than she realized her education had been much fuller than that of her peers at other schools.

At home, her mom also “made sure she went out of her way” to find books with characters of color. The first time Dawson read Debbie Allen’s Dancing In The Wings, which tells the story of a Black ballerina, she believed that Allen had written the book specifically about her. Decades later, she is planning to pursue teaching certification through the American Ballet Theatre.

Now, she's hoping to pass that on to her own students. She's a fierce believer in the power of books: Dancing In The Wings inspired her to become a dancer at a time when Black women still had to paint their pointe shoes to match their skin tone. In the absence of field trips and in-person classes this year, she has streamed programming from the Shubert Theatre, including The Hip-Hop Nutcracker and Step Afrika!, to keep that momentum going with students. She said the daily book series is just one more part of that.

“This knowledge is important across the board,” she said. “Not just with Black students but with all students.”