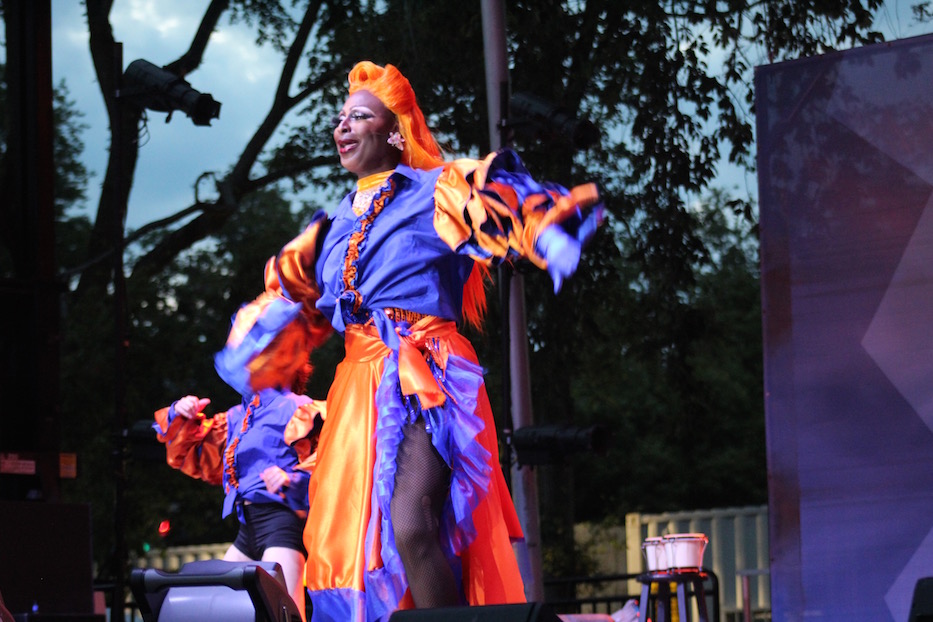 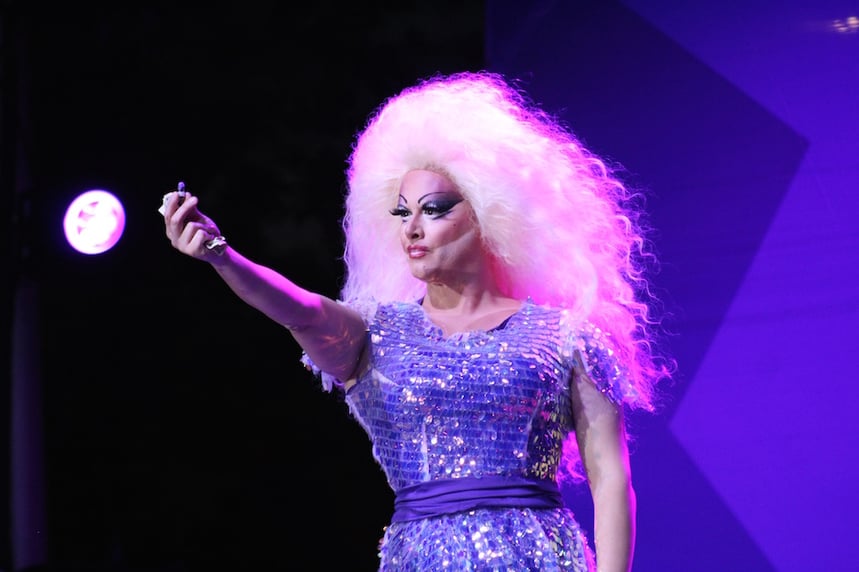 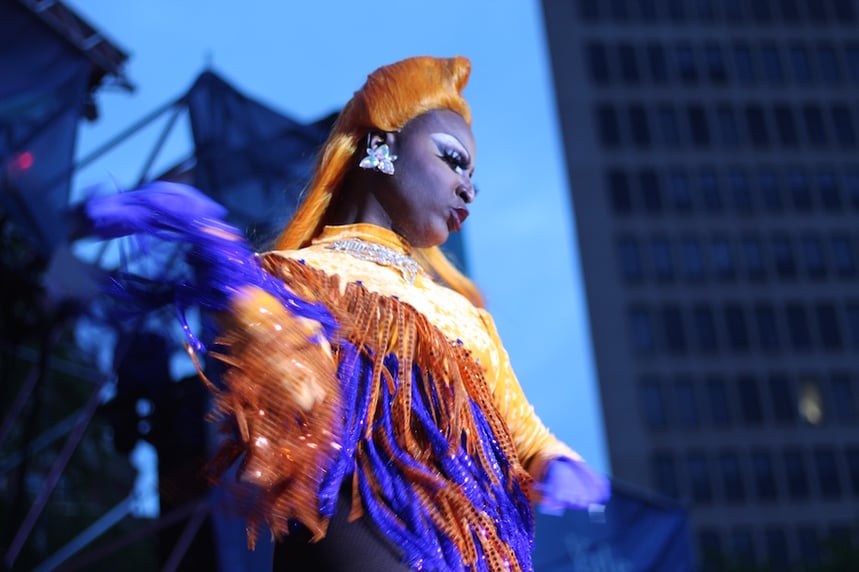 Ms. Kiki Lucia was on a quest for the nine dragons of Pride. She had her work cut out for her: gray boulders dotted the stage, turning the clock back to a sort of mystical-meets-dystopian prehistory. Prerecorded violin and cello drifted beneath her voice. The music faded right into cheers and applause from a growing crowd.

That rainbow-toned odyssey came to the New Haven Green Sunday night, during “DRAGtastic Journey,” a celebration of Pride Month that doubled as the finale of the 27th annual International Festival of Arts & Ideas. After two months of neighborhood festivals, concerts, soul-stirring performances, panels, and tours on foot, bike and boat, the festival came to an end with back-to-back drag shows.

The first came from Connecticut drag royalty; the second from Los Angeles based ​​Beyoncé tribute artist Miss Shalae. Both, but particularly the first, reminded attendees that drag comes in all shapes, colors, sizes and levels of physical ability. 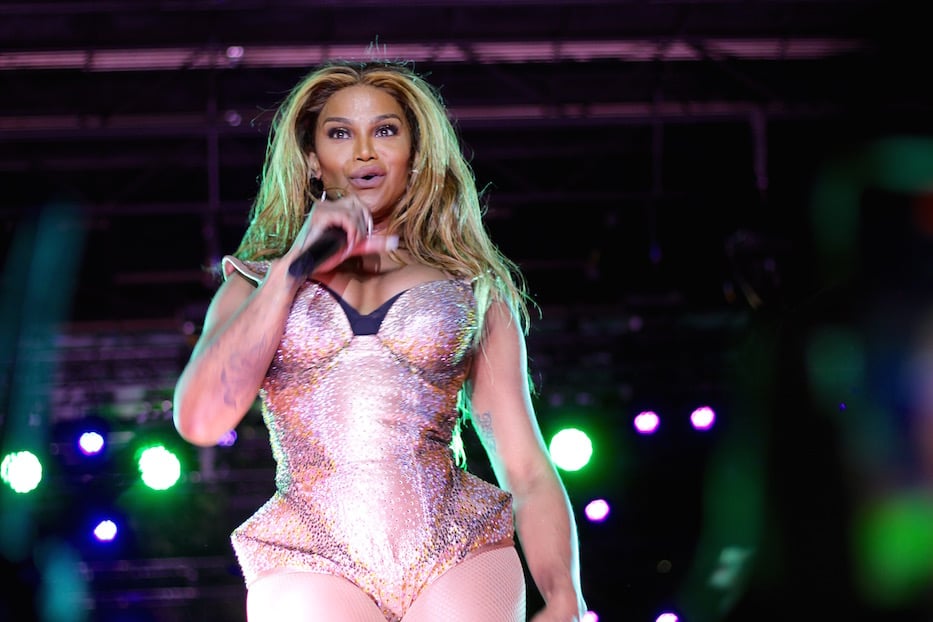 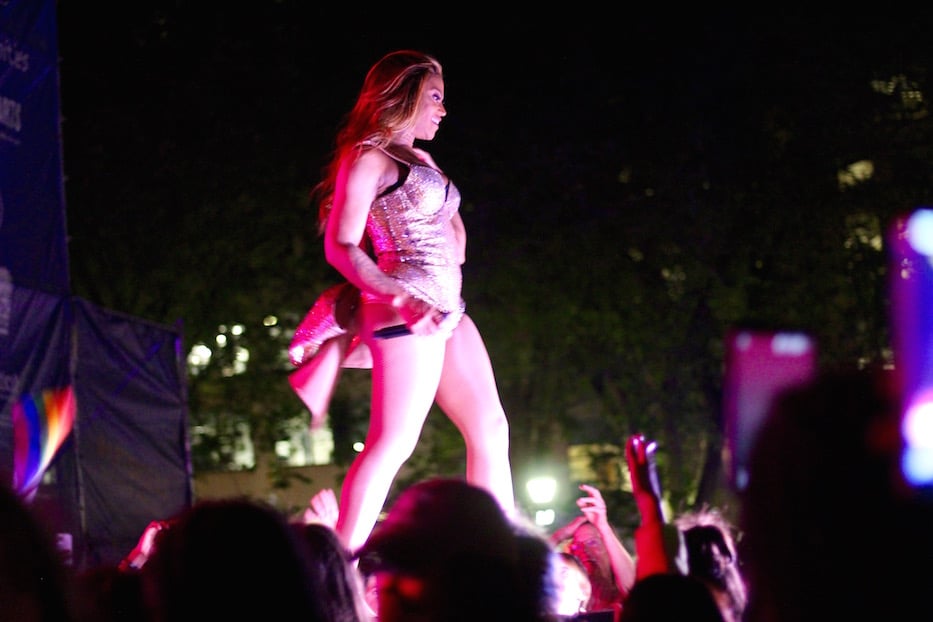 “I look around the world and I see that humanity has fallen into a sad and dark place,” Lucia said at the top of the show, her words eerily familiar. “Where none of us have equality or equity and we’re constantly fighting amongst ourselves.”

The journey—which seemed to span centuries and multiverses all from downtown New Haven—has been almost a year in the making and started with a slip of the tongue. Last year during the Legend Drag Show on the Green, a pint-sized attendee introduced the event as “the dragon show,” imagining winged, fire-breathing creatures in place of the kings and queens about to grace the stage. Malakhi Eason, director of programming and community impact at the festival, suggested running with the idea. Not only did he find it funny and inventive—the attendee was also his niece. 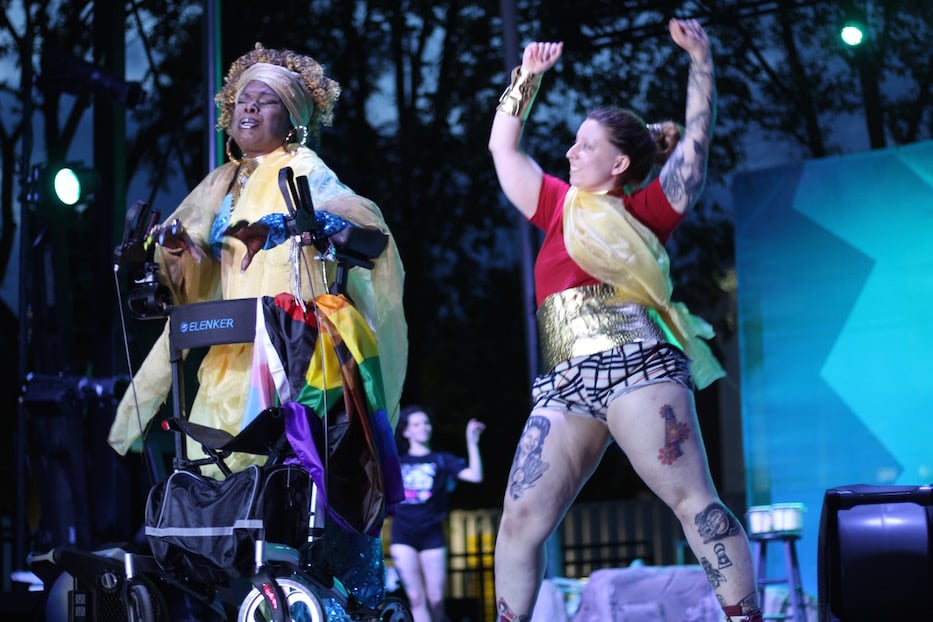 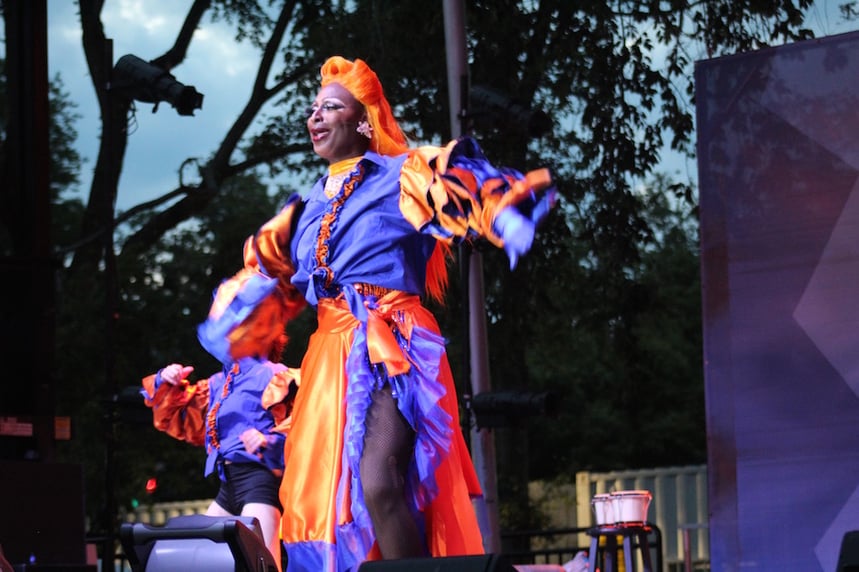 Top: Bubblicious, one of the dragons of turquoise. Bottom: Sparkle A. Diamond as the orange dragon of healing.

“We did an entirely new cast this year and that was really intentional,” Dunn said in a phone call Monday morning, praising the festival for fair compensation and respect of the artists that has not always been its trademark. “I want to make sure that the community here that sees the show knows the diversity of our drag community.”

Sunday, they brought that to the stage in force. Dressed in a shimmering sequined dress and wispy, purple-streaked white wig, Lucia stepped out onto the stage to cheers from the audience. In the crowd, tiny Pride flags flapped back and forth, Above her head, lights on the stage glowed rainbow. 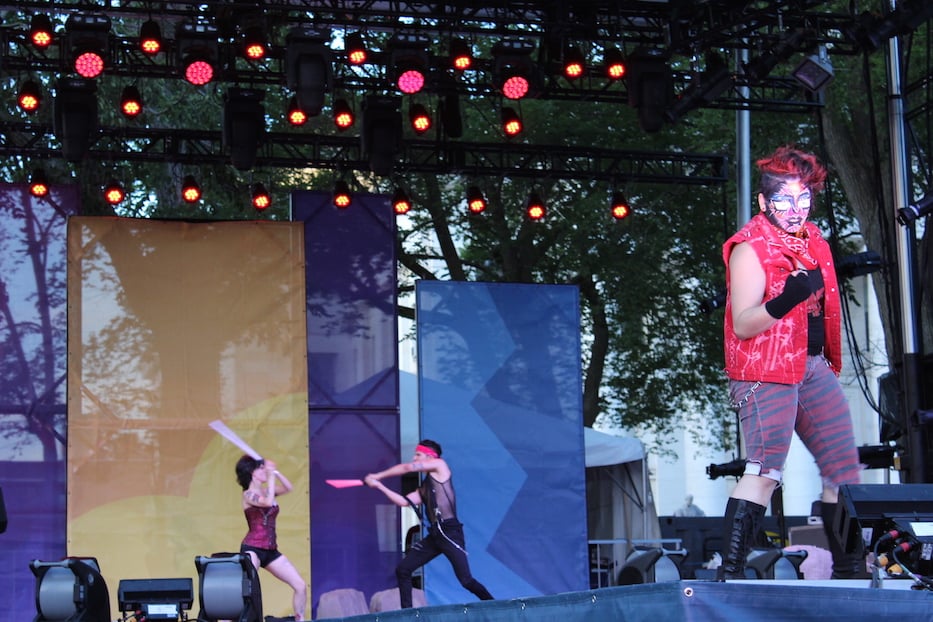 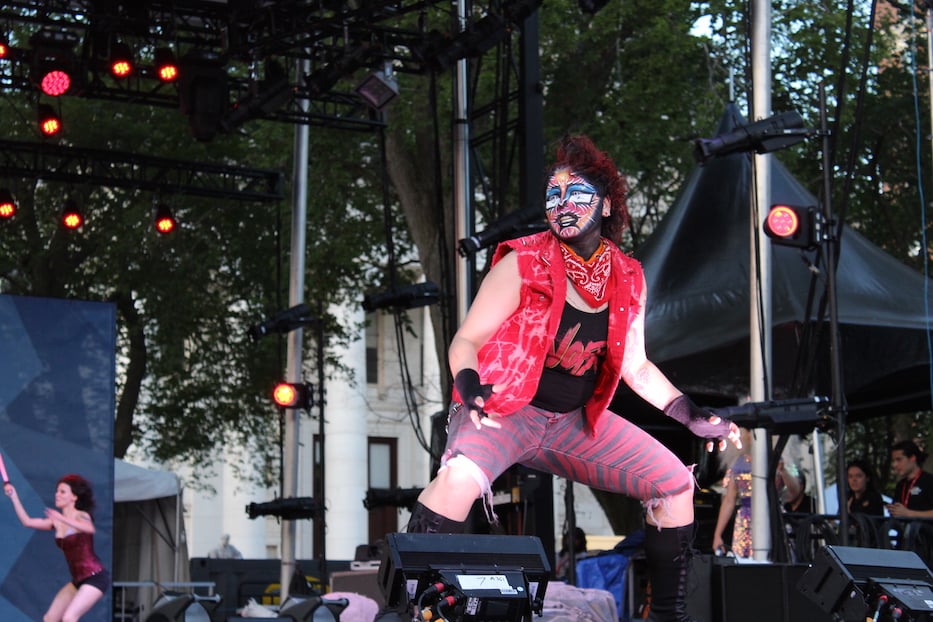 She sketched out the premise: that the dragons of Pride for centuries protected humanity, but “slowly disappeared” as humans decided that they no longer needed them, and slaughtered the violet dragon of spirit to prove their point. In both a weekend and a year that has seen mounting attacks on women, LGBTQ+ and particularly trans people, the cautionary tale felt right on time.

“Humanity fell into a dark, dark land of misery, sadness and inequality,” she said. “I am going to find the dragons and bring them back so that we can once again experience the true peace and serenity of Pride.”

And for the next hour, she and a cast of drag royalty from around the state did just that. Taking the stage to sword fighters (Rory Roux Lay and Kleber Gordillo) and a metal-kissed cover of ​​Pat Benatar’s “Love Is A Battlefield,” Paxx Headroom rocked out, coming up a runway to lip sync directly to the audience. Morgan Freeman’s deep voice cut in, with a passage from The Bucket List that gave way to a cover of Elton John’s “Still Standing.”

At the far left of the stage, a dancer jumped up and down with a sign that read “Love Wins!” in thick black letters. The audience sent up a few cries of yaaaaas and woooo!, a few tiny ​​flags flapping in the wind. 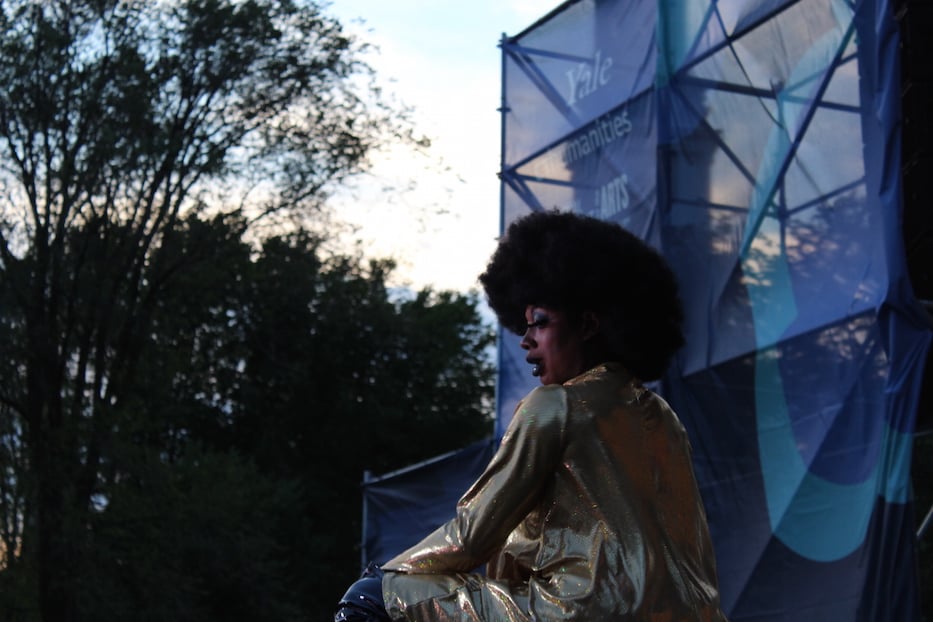 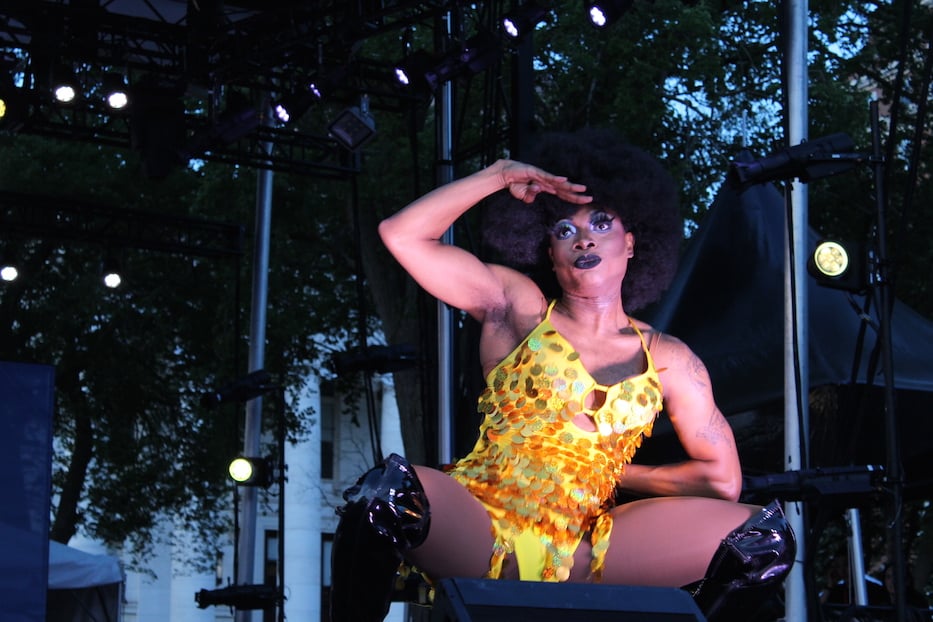 Lucia kept searching, revealing the dragons one by one. To a slowed, stripped-down version of “This Little Light of Mine” that flowed into Natasha Bedingfield's "Pocketful of Sunshine," Kenya Mone Heart became sunlight herself, sending shafts of glittering light out into the audience as the sun set over her head. To ​​Dj Khaled’s “Shining”—which she was—she pulled off her layers and began to vogue.

There was the green dragon of nature, tying together climate crisis and queer liberation as Mia E Z'Lay took the stage to a mashup of music and clips from SNL’s “Weedkend Update” (watch her performance in a video of the performance here; it begins at around 29 minutes). 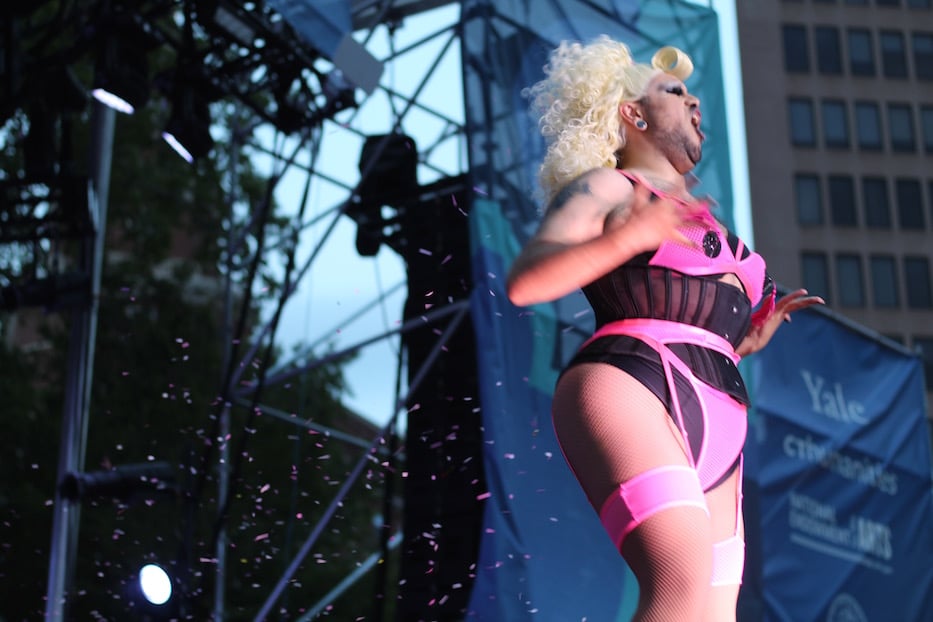 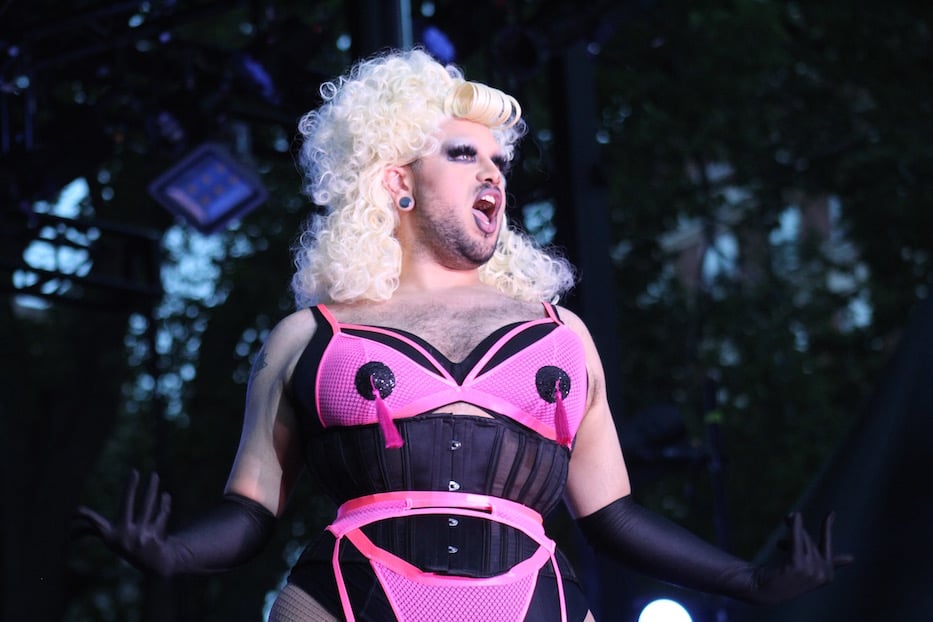 Then the dragon of sex, who sent a spray of pink glitter into the evening as Kim Petras’ “Do Me” blared over the stage. As each black glove came off, pink petals drifted into the cooling evening. As Glass Staine danced, they turned Petras' song and original video on its head, making it into a genderqueer text.

As the dragon of healing, Sparkle A. Diamond nearly brought the house down with Ledisi’s “Feeling Orange but Sometimes Blue.” As she strutted offstage, Lucia searched for Miz Destiny, the first of two blue stripes that Gilbert folded into the flag. 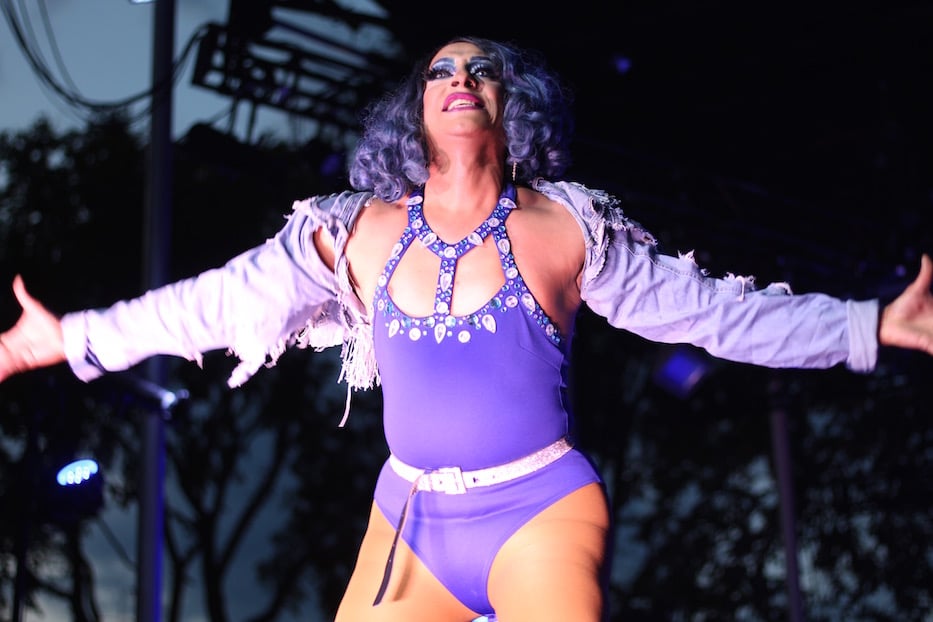 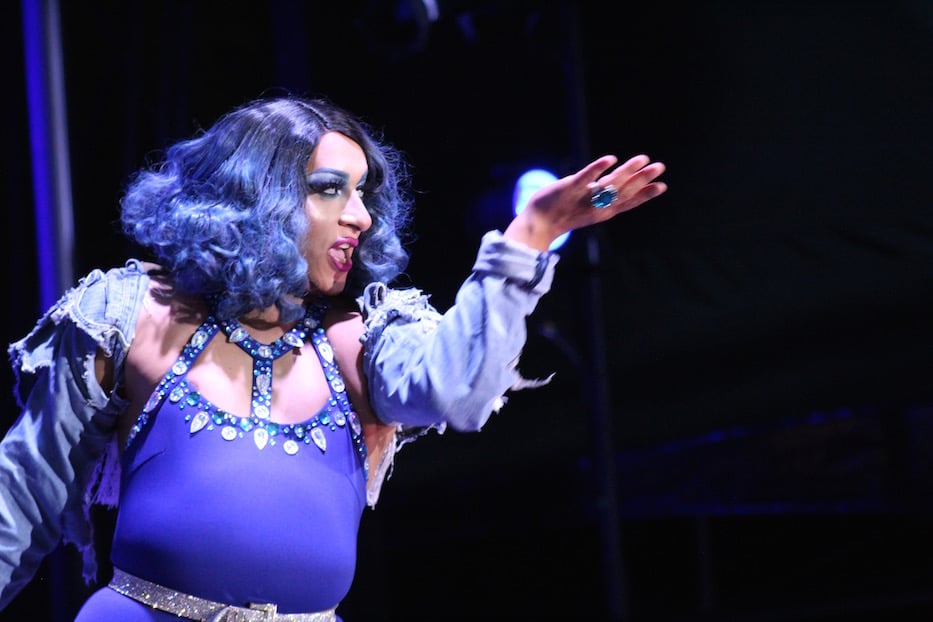 Miz Destiny takes the stage. “Calm in the face of adversity allows us to create change,” Lucia said.

Before the journey was complete, Lucia still needed to find the dragons of turquoise. Attendees cheered as two veteran performers—Bubblicious and Laiylah Alf Aw Laiylah—walked onto the stage to Doris Day’s “It’s Magic.” Bubblicious, who is more affectionately known as Bubbles, stood stone still at stage left.

In a flowing, gauzy turquoise gown, blue fairy wings and a tiara, Laiylah summoned Bubblicious, unfreezing her with a tap of her guttering wand. From a speaker somewhere offstage, Doris Day made friends with Dame Shirley Bassey, and then switched into Kylie Minogue’s “Magic.” Bubblicious undid her head wrap, revealing a knot of turquoise braids underneath. She looked into the crowd, and began to dance from her mobility aid.

The two were just getting started. As “No More Tears” blared over the speaker system—pairing disco queens Donna Summer and Barbara Streisand—they danced in unison, and unfurled a version of Daniel Quasar’s Progress Pride Flag emblazoned with the words “Black Lives Matter.” 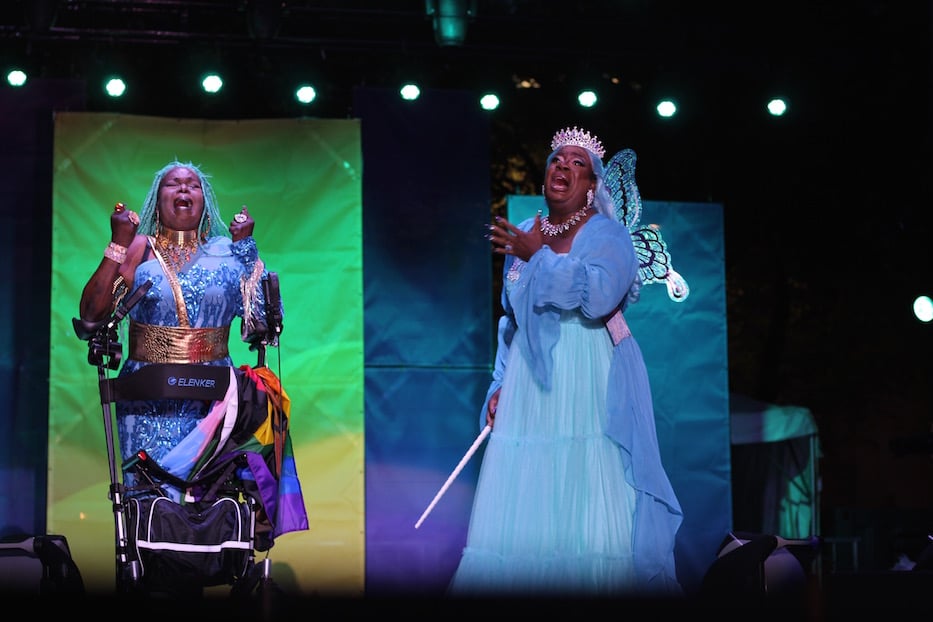 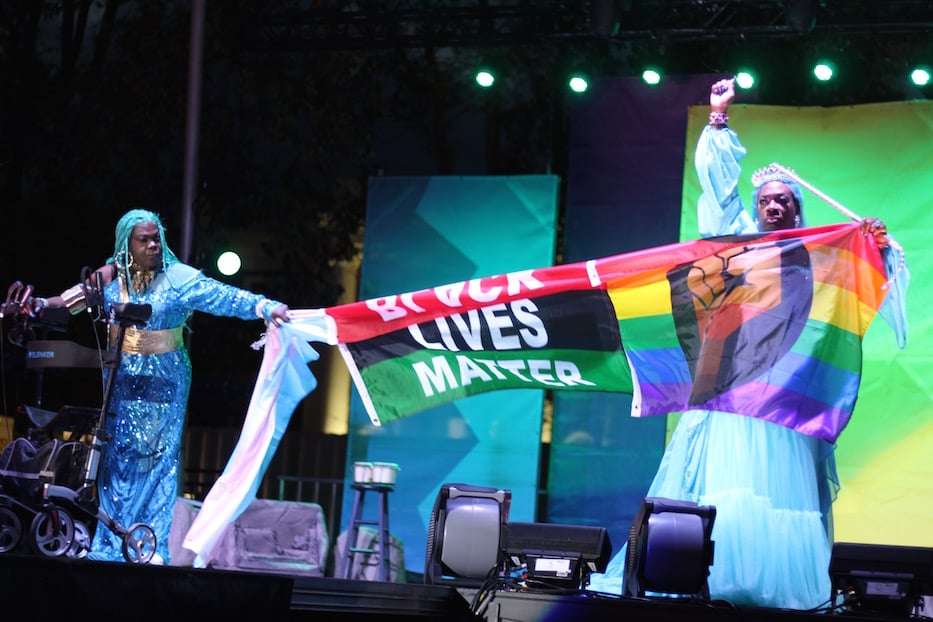 On all sides, dancers lifted signs for the second time that evening. Racism, read one. Islamophobia and Xenophobia, read another. At the very front of the runway, a third caught the light with the words Sexism/Ilegal/Abortions. The first few rows stood for a roaring ovation.

On stage, Lucia returned. She didn’t need to look for spirit any longer, she said—she’d discovered it within herself. Before gliding across the runway to “The Voice Within” and Sia’s “Unstoppable,” she pulled a glinting purple vial from her chest. Spirit had been sitting there the whole time.