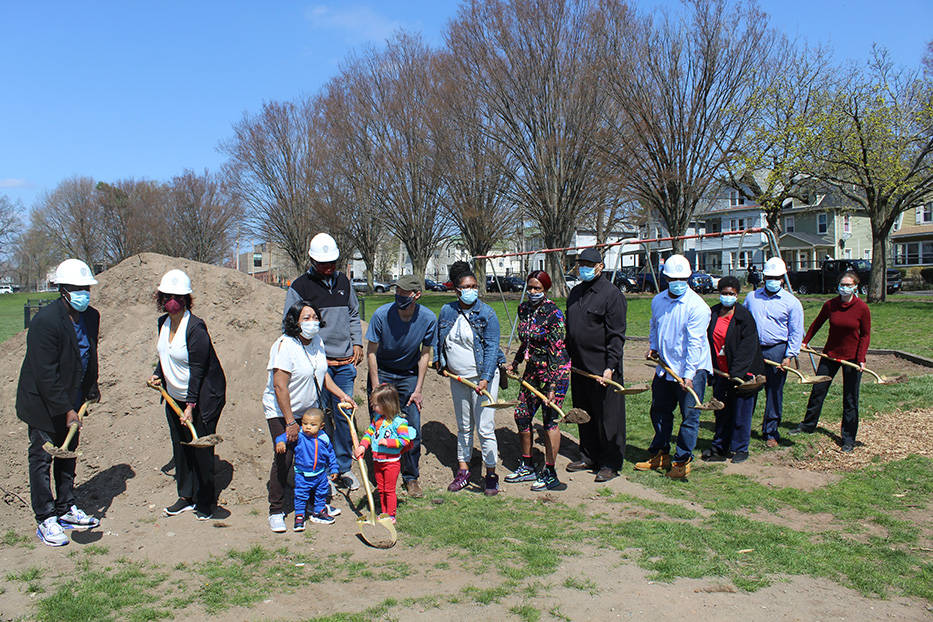 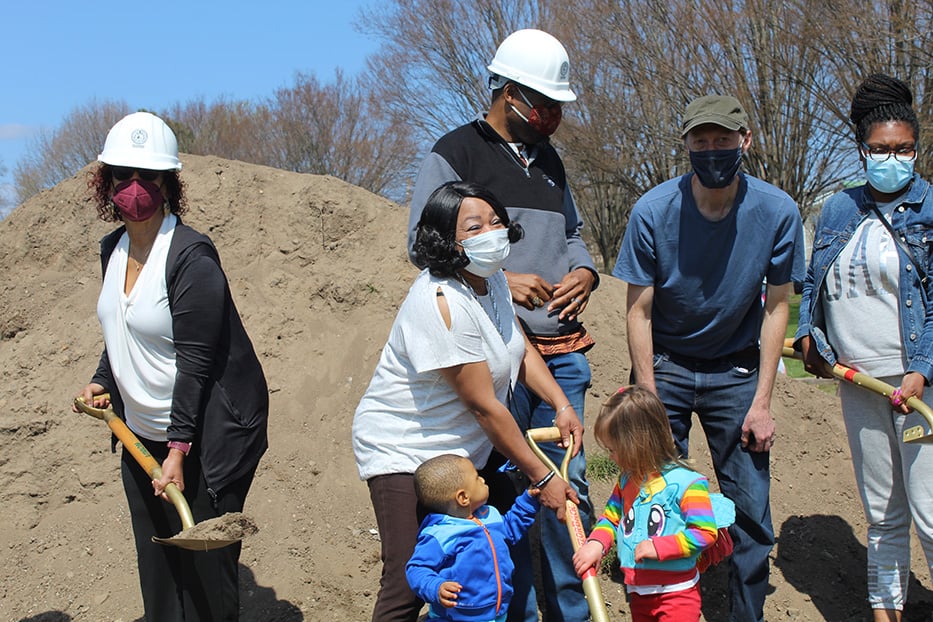 A splash pad for kids to run through in the summer heat. New grills and picnic tables for family cookouts and birthday parties. A field house with a studio and outside lighting, ready for the young performers and organizers who fill it each year.

Those are just some of the upgrades coming to DeGale Field, more commonly known as Goffe Street Park, this summer. Saturday, city officials, faith leaders and Goffe Street neighbors came together to celebrate that news in a ceremonial ribbon cutting and groundbreaking in the park.

“I want people to feel like it is for everyone,” said Beaver Hills Alder Jill Marks. “A lot of people don’t get to leave the area and go to the nicer green park … this is for us.”

Marks said she is especially excited to welcome families from the neighborhood back into the renovated park. Too often, she said, nearby families don’t feel comfortable bringing their children to the park, and travel to other green spaces in the city.

As a member of Friends of Goffe Street Park, Marks has been working to change that with a number of neighborhood festivals and Christmas tree lightings that predated the pandemic. She said she hopes that the new additions will both retain members and invite people from across the city to visit. DeGale Field sits across  the street from the Goffe Street Armory, which is owned by the city and has been abandoned for years.

The renovations are funded through a $217,595 grant provided by the Connecticut Department of Energy and Environmental Protection (DEEP). They will include a splash pad, four picnic tables, two grills, fencing around play areas, and updated playground equipment. A repaired field house will also have a kitchen, studio, and outside lights installed.

The splash pad and picnic area are both community-sourced suggestions, the result of a door knocking campaign led by Friends of Goffe Street Park. Renovations are expected to be finished by the end of August, said city Chief Landscape Architect Katherine Jacobs. 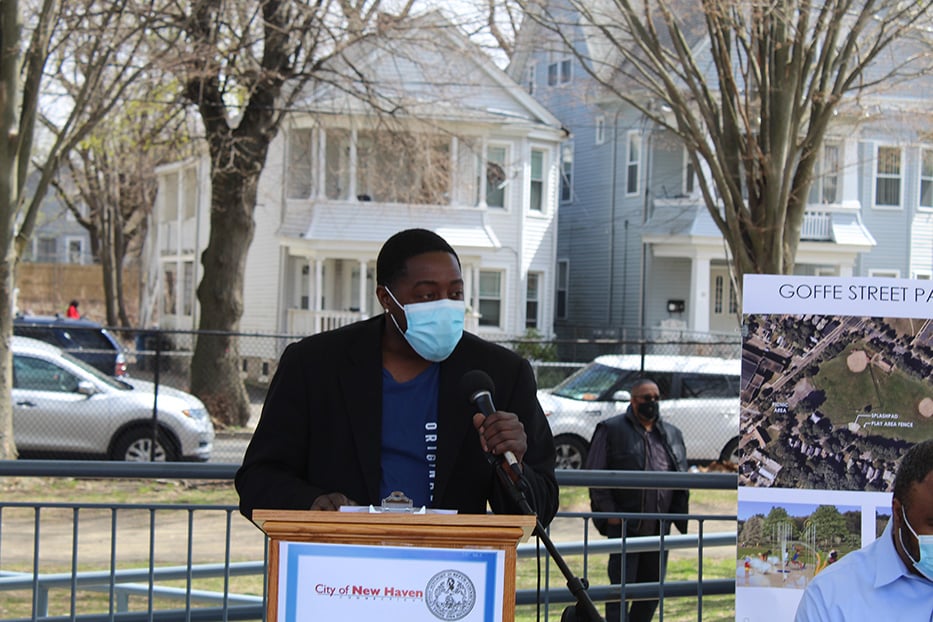 Chaz Carmon, executive director of Ice The Beef, called the park a gathering space for people of all ages and walks of life. Ice The Beef has regularly hosted its meetings at the field house since 2014; it has been an organizing space for marches and stage for young actors and vocalists. As he spoke, basketball games unfolded across both of the park’s courts, where the city has reinstalled the hoops for the first time since the pandemic started.

“So many families are affected positively, just look at the basketball court right now,” he said. “ You can come there. Over the summer, and see two or three hundred kids playing football, kids in the park, elders are playing horseshoes … Jewish families out here playing baseball. Right, everybody utilizes this park.”

Walker-Myers, who led funding efforts at the state level, grew up two blocks away from the park and remembered families having picnics and children playing baseball. During a rally against gun violence last summer, she spoke about the neighborhood feeling safer when she was young and it wasn't uncommon for kids to play outside  late into the evening while neighbors kept an eye on them.

The park has been a focal point for the community for decades. There have been events like Gospel Fest, which was held on and off at the park from 1990 through 2019, as well as New Haven Caribbean Heritage Festival. Pastor Donald Morris, executive director at Christian Community Commission,  remembered when it served as an organizing space in the 1970s.

Morris recalled how Unity in The Community, a local organizing group, held conferences and events at the park including voter registration drives. Morris said  the park became a site of drug and gang activity when the crack cocaine epidemic hit the city in the 1980s and 1990s. 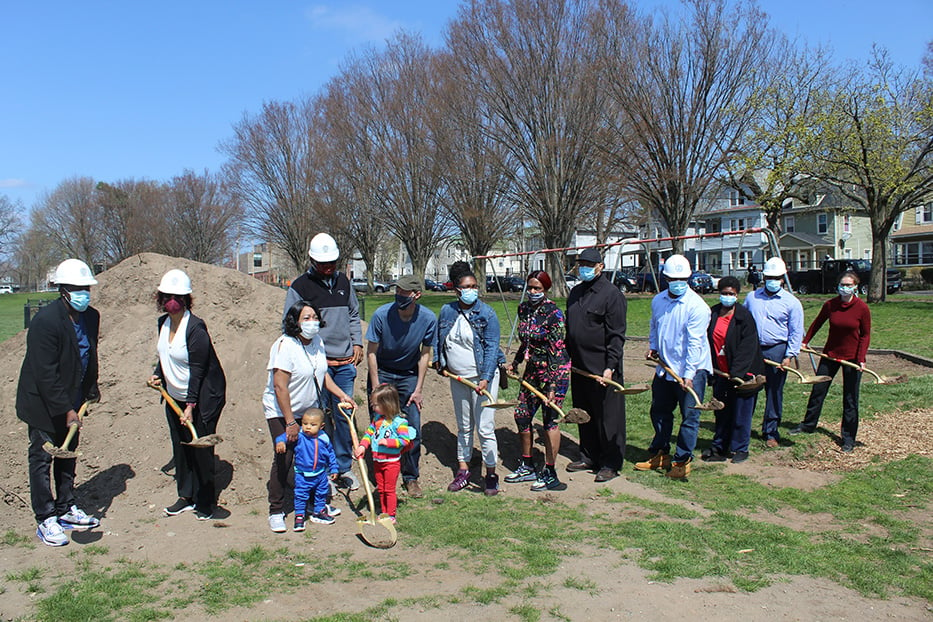 He believes that the renovations could potentially increase foot traffic to the park and said that neighborhood residents should take priority, particularly when it comes to new equipment in the park. He suggested either making County street a one way or closing it off entirely.

Mary Brown has lived on County Street for 60 years and has seen the park become less accessible to residents in recent years. She hopes that the renovations will continue to build up the neighborhood and become more welcoming to families.

“My kids used to go out and play in the park staying out there 'til 11 p.m. or midnight,” she said. “I want for all people around the community to be able to take our kids here and not go to another park.”