Kehler Liddell Colors Through The Distance 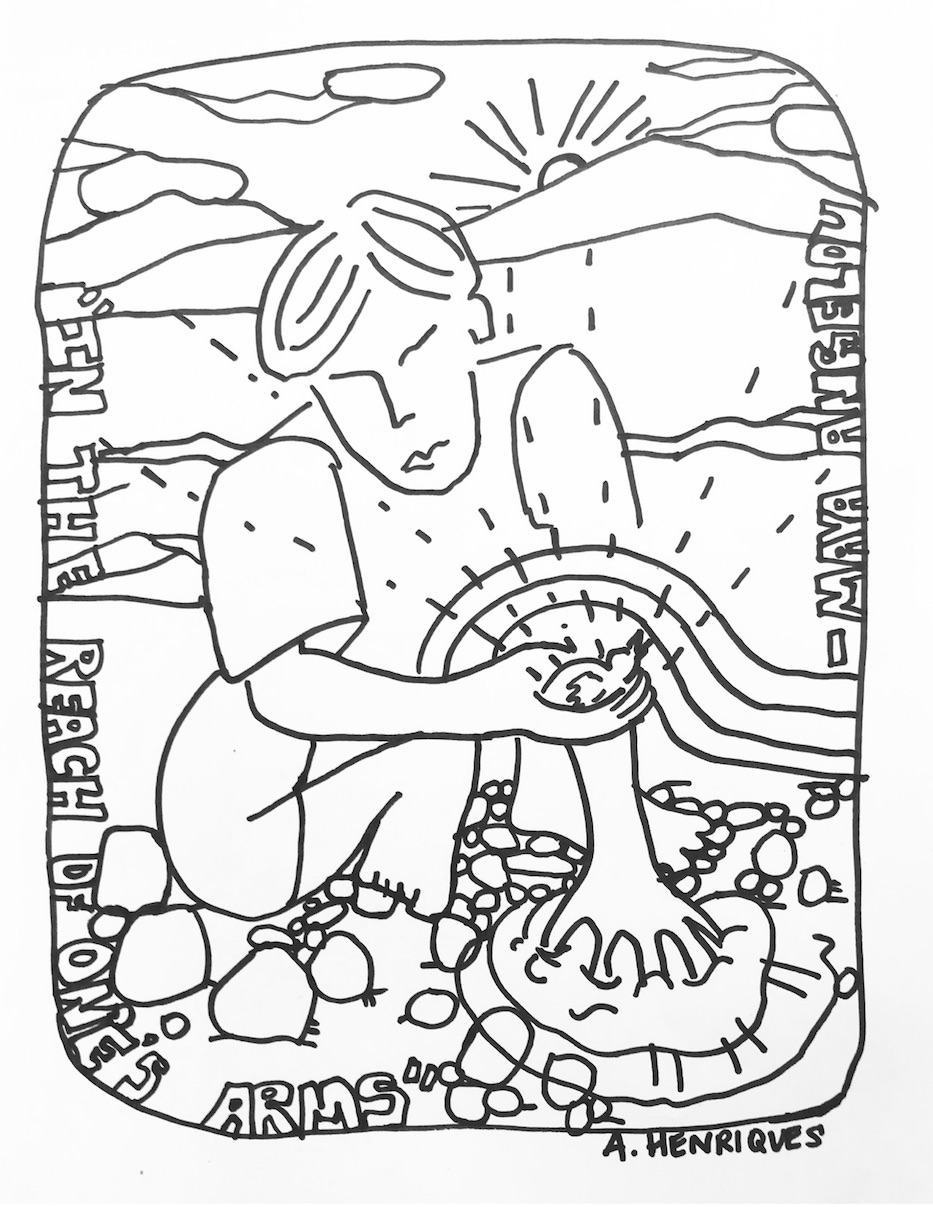 The figure crouches, one hand in the dirt as the other cups a chick. Her are fingers spread wide, rooting. Her legs are steady, knees bent at an angle. One foot flexes. The chick starts to sing: steady lines of birdsong fly from its beak. A background blooms into focus. The words “In the reach/Of one’s arms” wrap the frame.

Ana Henriques’ homage to Maya Angelou joins several drawings in a new coloring book from Kehler Liddell Gallery meant to wait out quarantine with meditative visual art. The book comes two months after the Whalley Avenue gallery closed its doors to the public in response to coronavirus. It is available for download on the gallery’s website.

All proceeds go to keeping the gallery afloat during the pandemic. For families without a printer at home, Gallery Director Liz Antle-O’Donnell is offering a delivery option as well.

“It was an idea that I had kind of kicking around for some time, but this seemed like a good moment to debut it,” she said in a recent phone call. “I wanted to have something for everyone. There are pages that might be better suited for younger folks, and some that might be good for older folks. We thought it could be an opportunity for parents to get a moment of quiet.”

Antle-O’Donnell speaks from experience: she is a mom to two young boys, and has been balancing parenting with grant proposals, applications for federal relief, and attempts at virtual programming for the gallery and Westville-based ArtEcon Initiative. When the first wave of COVID-19 closures hit the city in March, she recalled assessing and reassessing the situation, trying to decide whether the gallery should close and for how long. 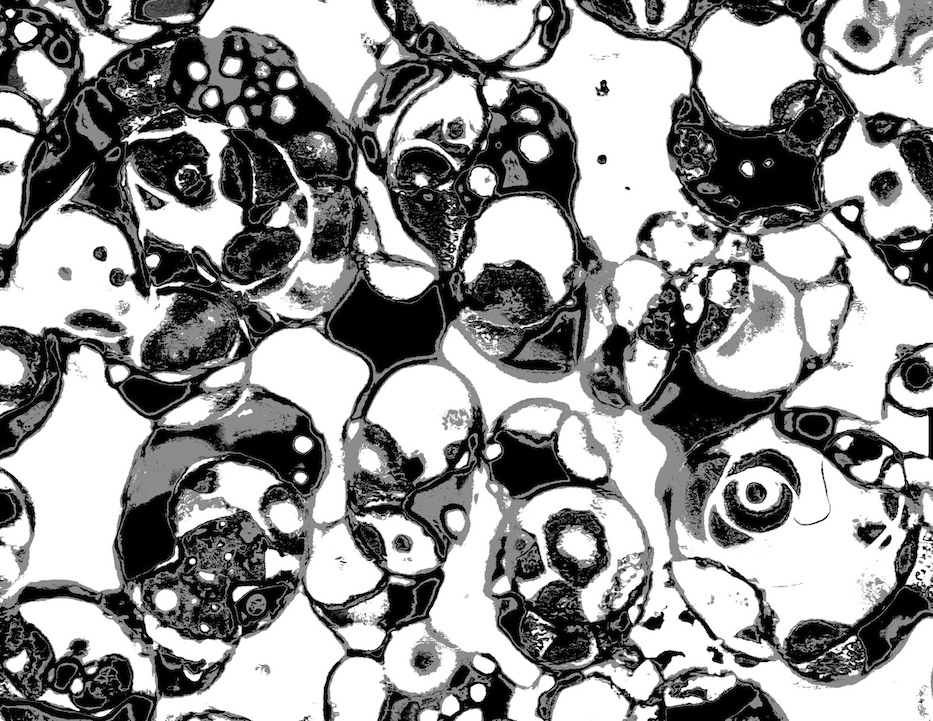 She tried moving events on the calendar. Then she tried limiting exhibition tours to groups smaller than five. As soon as she thought she had figured something out, the conversation around the virus changed.

“We finally just put it on pause,” she said. “For a few months, we'll be okay. Then I don’t know. We just have to keep innovating.”

After the gallery closed its doors in mid-March, she unveiled a first round of online tours, dedicated to work by artists Frank Bruckmann and Kim Weston that is still installed at the gallery. She began applications for federal and local relief, which resulted in funding from both the Paycheck Protection Program (PPP) and New Haven Creative Sector Relief Fund. Muffy Pendergast, the gallery's assistant director, also started a series called SalonThrive featuring several of the gallery’s artists.

She also started reaching out to members—Kehler Liddell runs on a cooperative model—to see who was interested in a coloring book. Realistically, Antle-O’Donnell said, the gallery may not reopen until mid-July, and even that would be on a limited basis. She can’t imagine resuming space rentals in the near future. Commercial spaces that worked with the gallery for satellite exhibition have frozen those contracts. That means three of the gallery’s revenue streams are running close to empty. In the meantime, the book may bring in a little funding while giving families something to do at home.

Julie Fraenkel, one of 11 artists featured, said she jumped at the opportunity. When she heard from Antle-O’Donnell, she started thinking about what sketches and line drawings already lent themselves to a coloring book—and to the current moment. Both of the pieces in the book are “little seeds” that she pulled out of previous work.

In the midst of COVID-19, she has been dedicating the bulk of her efforts to sewing masks. She’s also been keeping a sketchbook with a cartoon character named "Distractible Girl,” based on her real-life experience of feeling more “scattered and unstructured” than usual.

“I always wanted to do a coloring book with my drawings,” she said. “I love coloring. I used to love to get on the floor and color when I was a kid. I often do a line drawing and then I will color it in myself. I think my work is a kind coloring book anyway.” 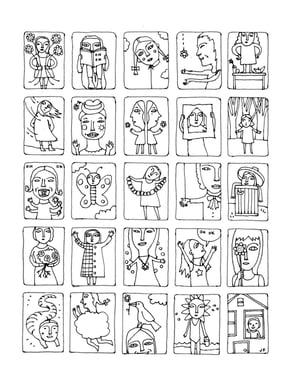 In one page she has submitted (pictured at the right), figures pose in 25 different frames, frozen in the moment. They are curious and wacky: they delight in books, hold flowers and empty, makeshift picture frames up to their faces, imagine themselves onto the bodies of animals and clouds. There is a wonderful sense of adventure, as if an illustrator can travel the world without having to leave their couch.

In another, a girl peeks out from a giant home, so fairytale-like it looks like it may be waiting for gingerbread and frosting. To her right, a cartoon mouse opens a tiny door and does the same. Nature explodes around them: trees spread their leaf-tufted branches, smiling fish swim through a river, flowers sprout up through the grass. At the left, a fox rests on the lawn, unhurried.

A banner reading “Bloom Where You Are Planted” wraps around a tree. While it is not a meditation on COVID-19, it feels timely: so many viewers have been forced to bloom where they are planted, whether they wish to or not. Like the girl, Fraenkel has been noticing nature outside her home, blooming on despite a global pandemic. Recently, she and her husband discovered a family of foxes living close to their home.

“I don't live in a castle, but it feels like that right now,” she said. "I'm amazed by how much in my sketchbooks kind of suits this moment … I have a lot of things that are like isolation drawings.” 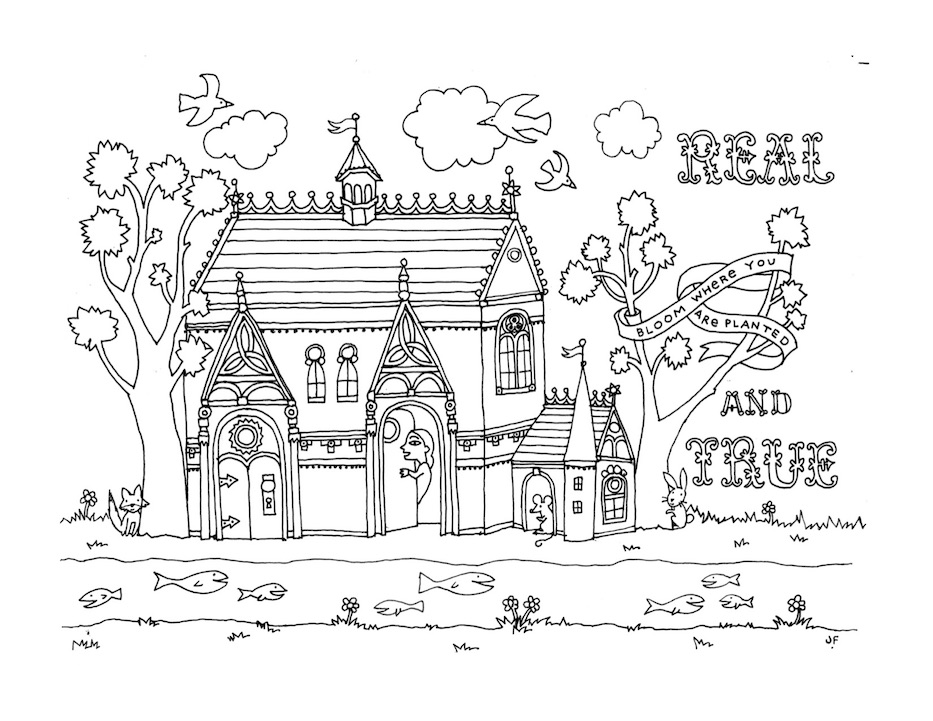 Henriques, who submitted two pages to the coloring book, said that she has also been drawing inspiration from nature. In one image, she has made magic out of a study of the Edgewood Duck Pond. Within an undulating, lasso-like frame, trees reach towards the sky.

Their markings and knots have been transformed into humanoid features, as if they are looking back at the viewer. The flowers are familiar enough, but also appear to be from a different planet. Big, messy hearts peek out from the ground, where walking paths should be.

“Nature is life giving,” she said. “I'm doing a lot of small works on paper that I'm going to bring into my studio practice. Which is hard for me— usually I'm a big picture thinker. For this, I just sat and I studied the trees. I'm just loving how ... it's all very meditative. The more you look, the more you see.” 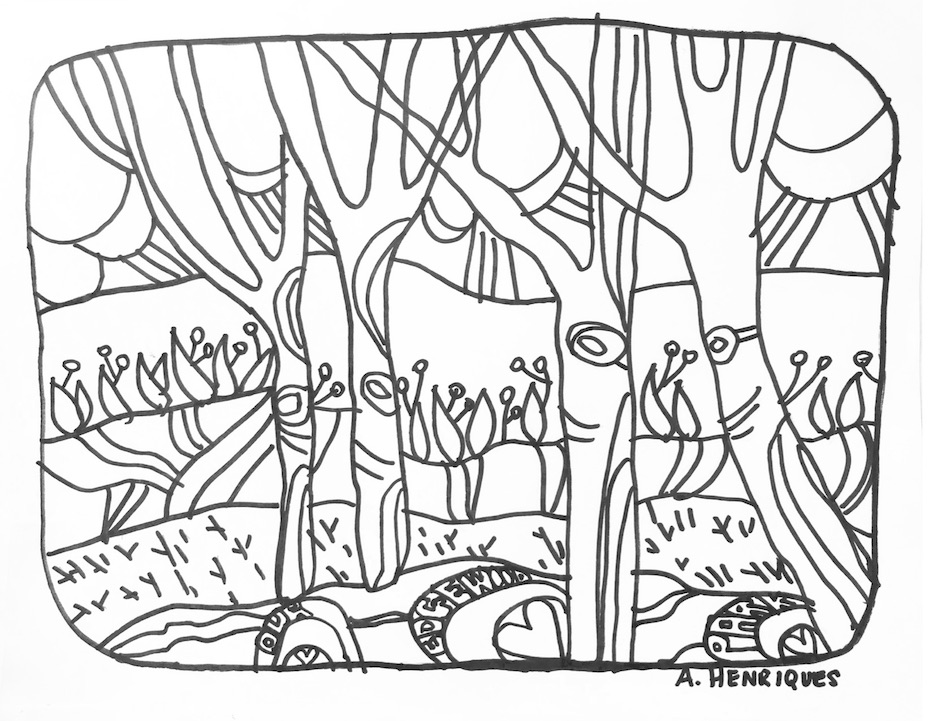 She added that COVID-19 has made time seem granular—it’s forced her to slow down in her practice and in her life. For the past two months, she’s been teaching for the Hopkins School via Zoom. She’s also raising two young kids. She isn’t able to think about the future because she’s so consumed with the present.

It has also made her think more about the value of “women’s work”—labor that is essential, but thought of as domestic and thus rarely compensated—that was has long been a theme in her practice. In a piece based on the late Maya Aneglou’s Phenomenal Woman (“It’s in the reach of my arms/The span of my hips/The stride of my step,/The curl of my lips”), a figure crouches down in the spring dirt as she tends to a young bird.

“I’m thinking about it as a caretaker,” she said. “It’s spring, which is my favorite season because of all the new birth. While she's taking care of this bird in one hand, she's grasping onto the ground. She's agitating, she's holding on desperately, she's trying to root herself, she's trying to connect. ”

“It's just nice to do a project together,” she added of the coloring book. “It's a nice opportunity to do this.”

As the gallery remains closed, Antle-O’Donnell said she is already thinking of future iterations of the coloring book. After this version, which she sees as a sort of experiment, she suggested that there may be a second and third version viewers can look out for over the summer months.

“Certainly, it's a challenge,” she said. “We’re trying to figure out how we're going to make it in this time. As I've been saying, it's almost like we're in the business of bringing people together. And that has been put on hold.”