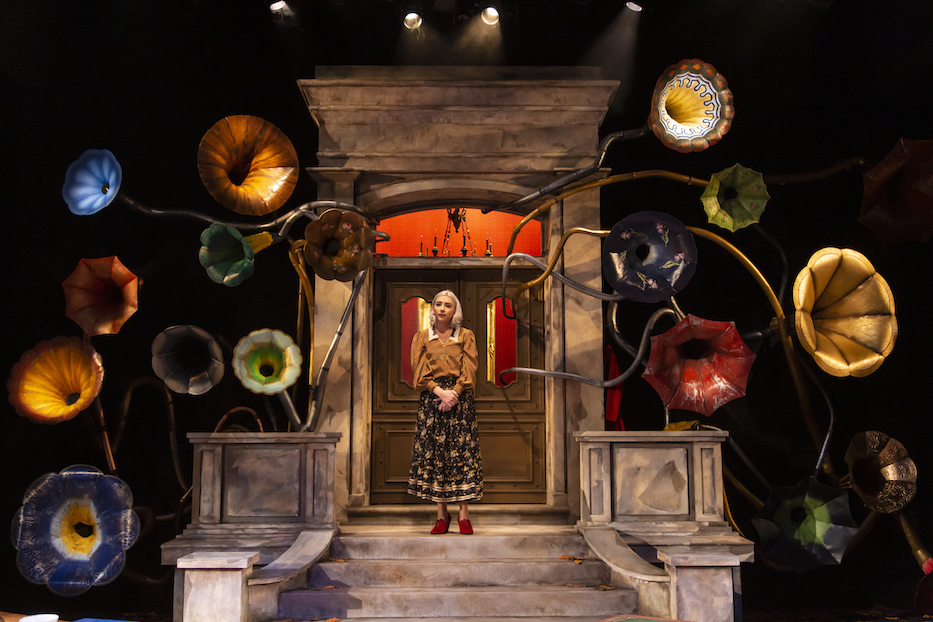 Charlotte von Mahlsdorf is remembering the thick of World War II. In that universe, British and American bombs fall around her and still she is playing music. It floats, nothing like the weapons of war that vibrate beneath it. An original Edison phonograph winks out from the stage. One corner of her mouth, set in a pearl-tinted rose, wavers.

“I thought, if they hear me, they will know I am their friend,” she says. In the present, she pauses, and returns to a tour of her museum.

Mason Alexander Park delivers a spellbinding, gut-wrenching, humor-flecked, and entirely symphonic portrait of resistance in I Am My Own Wife, running now through March 1 at Long Wharf Theatre. Directed by Rebecca Martínez and assistant directed Kevin Paley, this adaptation gives the narrative back to its central character, presenting a brave and poetic piece of theater in the process.

First written by Doug Wright in the 1990s, I Am My Own Wife tells the story of Charlotte von Mahlsdorf, a transgender woman who lived through both the Nazi regime and highly repressive Communist government of East Germany. During her lifetime, she was known for assembling the Gründerzeit Museum, a collection of material culture culled from mid-nineteenth century Germany and Austria.

The work is a play about a play, chronicling Wright’s own process of writing and interviewing von Mahlsdorf while telling the story of her life.

It’s a challenge to which the actor rises with energy and grace. From the moment the lights come up on the stage, their Charlotte is fully present, an all-knowing guide to not only her museum, but also to devastating chapters of German history. One does not need to know anything about the persecution of gay and queer people in twentieth century Germany going in; they will have learned it by the end of these two hours. 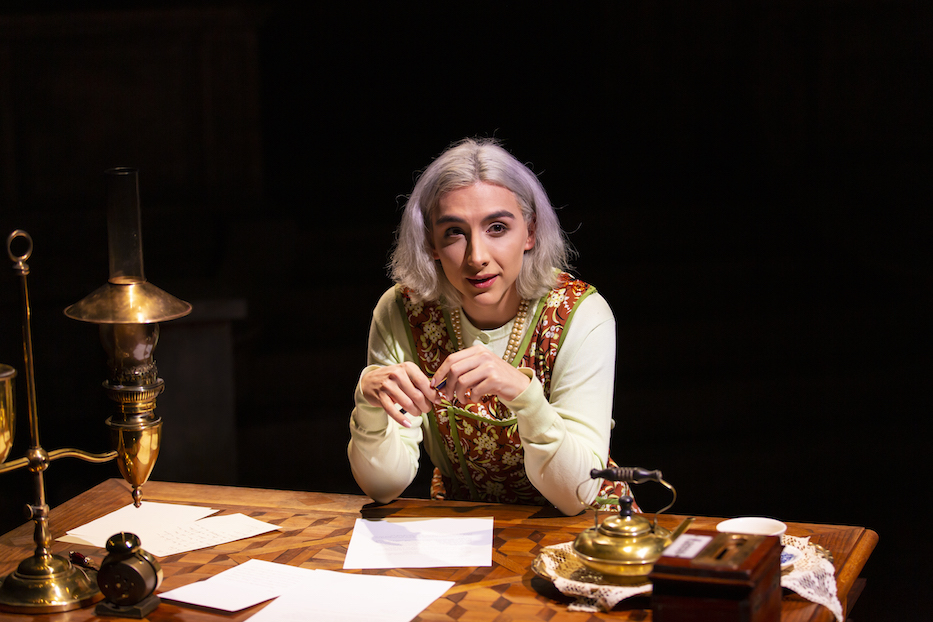 Park is astounding: they embody Charlotte with a thick, precise and sometimes purring German accent, but also finely-tuned breath, choreographed hand movement, and balletic steps that bloom into waltzes and polkas. When Park is Charlotte, the change is perceptible before she even speaks. Charlotte looks to her hands, and her eyes soften just so. She speaks of objects—clocks, huge oak tables, gramophones and phonographs—so convincingly she conjures them on stage.

The actor leans into Charlotte’s complicated history and narrative, which include killing her father with a rolling pin as a teenager, running the only gay club to survive East Berlin, culling objects from the apartments of Jews and German families who had been forcibly removed from their homes, and working—however willingly or unwillingly—as a Stasi informant.

Just as quickly, they also lean into Wright’s obsession with her—how this self described gay kid from the Bible Belt turned a playwriting project into an ambivalent love story. What the audience gets is an immensely tender portrait of a woman who was both valorized and demonized by history.

Park has devoted that level of attention to every character, exploring the space that exists between Charlotte and her family, Charlotte and practitioners of state violence, Charlotte and Wright, Charlotte and old friends, and even Charlotte and the secrets she chooses to keep. The actor has reserves of steel and humor at their edges, but is above all a gifted storyteller, building a narrative that is ultimately an ode to survival.

In one such sequence, for instance, Wright has asked Marks to ask von Mahlsdorf to tell him her birth name, and when she first knew she was meant to be Charlotte. Park is working through layers: there’s the humor of Wright and Marks and von Mahlsdorf all a little lost in translation, as if they are playing a game of telephone. There’s the humor, too, of Marks’ bastardized German. But Park also lets the exchange pulse, making clear the transphobia lurking just under the surface.

WAS WAR IHR GEBURTSNAME? their Marks near-yells, in a Southern drawl that instantly makes fun of every American who thinks the secret to speaking foreign language is volume level. It’s a laugh line, and yet the words also wound: the question demands that von Mahlsdorf peel herself from herself, and from the presumption that she has always been Charlotte.

Park turns their head; their shoulders move almost imperceptibly. Charlotte returns. In the audience, one remembers that this is the 1990s: “transvestite” was much more common than “transgender,” non-binary pronouns didn’t exist, and deadnaming wasn’t part of a mainstream discussion (it is still arguably not).

“Lothar Befelde,” she responds. And also, she adds, “Charlotte.” 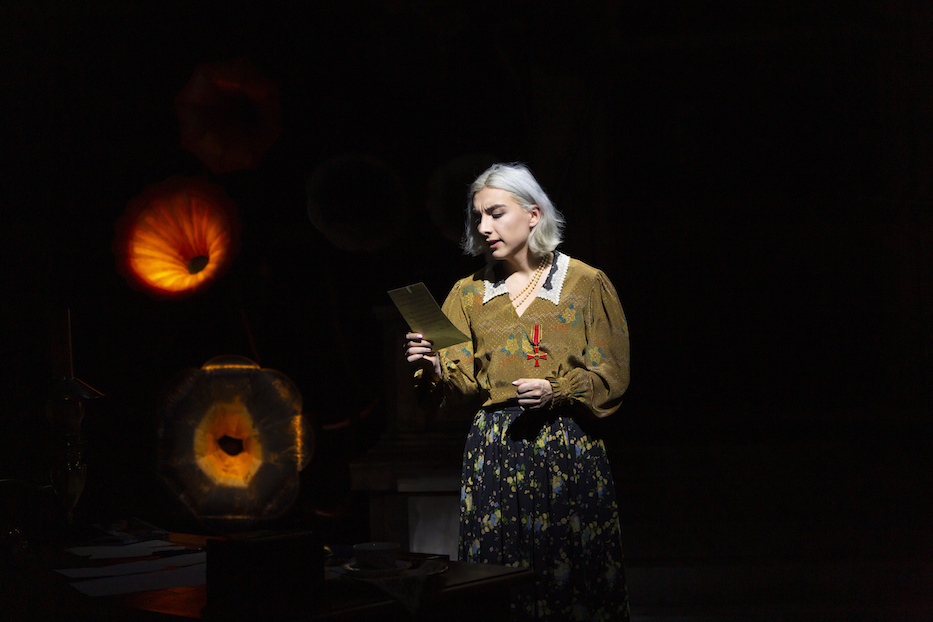 This nuance is there throughout: when Park recreates whole dialogues between Charlotte and her family, when Charlotte steps into a skirt and blouse and somehow becomes a fuller version of herself, when she waltzes around the museum in sturdy red heels. The weight of all her truths is palpable: Charlotte tells the story of her friend Alfred Kirschner (who Park also plays), a clock dealer who she is accused of selling out to the Stasi, and one wants to comfort while also wondering if they should condemn.

If Park has liberated Charlotte, they have not done it alone. An extraordinary set from designer Britton Mauk becomes inseparable from the play itself, as huge, bright phonographs sprout out from sides of the Gründerzeit Museum. Within the phonographs, lighting designer Jennifer Fok has used rings of red and yellow light to transform the stage. East Germany becomes West Berlin’s red light district (in Charlotte's eyes, an overwhelming site of unbridled hedonism after life in East Berlin), and later the set of a talk show. Mauk is otherwise economical: Wright’s desk sits upstage, with chairs and benches there as Park shape shifts throughout the show.

Costume designer Daniel Tyler Matthews also cracks something wide open, presenting a Charlotte in some of the vivid patterns, bright dresses and aprons, and bright heels that she loved and praised during her own lifetime. Sound design by Kimberly S. O’Loughlin brings the whole thing together, with a score that is so airtight the audience forgets that this is New Haven.

It marks a radical and welcome point of departure for the work. When I Am My Own Wife first premiered in 2003—one year after von Mahlsdorf died of heart failure in her own museum—critics fixated on whether Wright had done enough work to tease out the woman’s truths from her untruths. In performances, von Mahlsdorf was often played by a cisgender man in some version of a black muumuu, sometimes with a headscarf and single string of pearls.

Long Wharf is having none of that, and the work is better for it. Presented in brilliant color, the play pushes audiences to think about the long arc of history, and resonances of von Mahlsdorf’s life still today. While I Am My Own Wife is primarily Charlotte’s story, it is also a story of state violence, of European and world history, and of biases and unsafe spaces that exist both within and outside of the LGBTQ+ community.

On opening night, it was difficult to watch the show without the specter of a federal lawsuit filed Wednesday, from three Connecticut women who are seeking to bar transgender athletes from competing. It was difficult not to think of the 331 transgender people whose deaths were reported last year, the majority of whom were women of color. But it was also difficult not to think of steady, forward progress, including a new non-binary option on driver’s licenses and ID cards in the state.

It’s clear that Long Wharf wants to continue the conversation. In the lobby outside the theater, audience members can peruse a library microbranch and exhibition from the New Haven Pride Center. Partick Dunn, executive director of the center, has also written the program notes for the show, in a move that focuses on the work’s history as much as its inherent drama.

“We should not kid ourselves and think that this story is in our past,” he wrote. “Throughout the world, in 2020, there are laws and ‘cultural norms’ that bar queer folks from work, houing, resources, legal rights, medical treatments, and more.”

I Am My Own Wife is on stage at Long Wharf Theatre from now through March 1. Tickets and more information are available here.