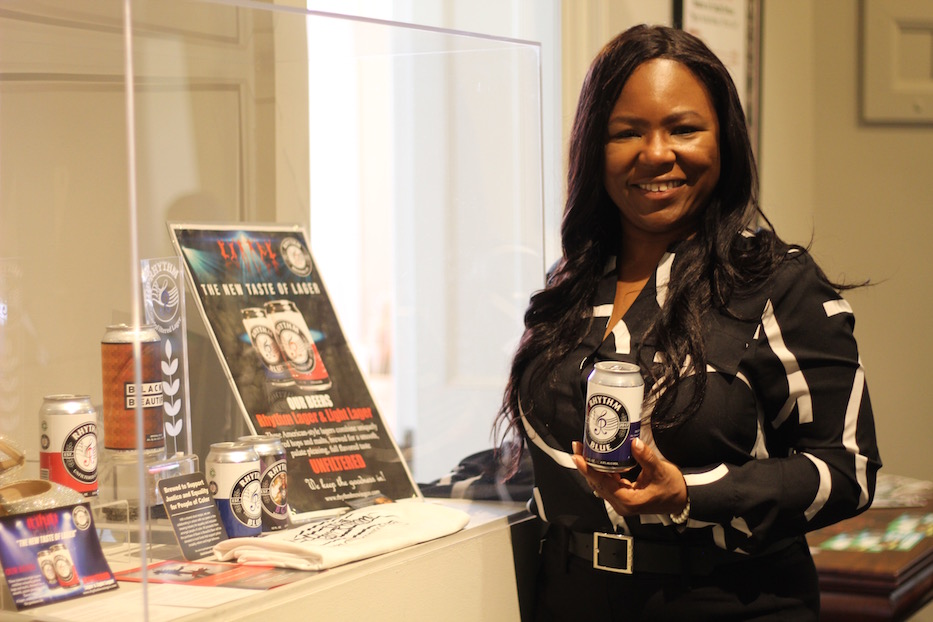 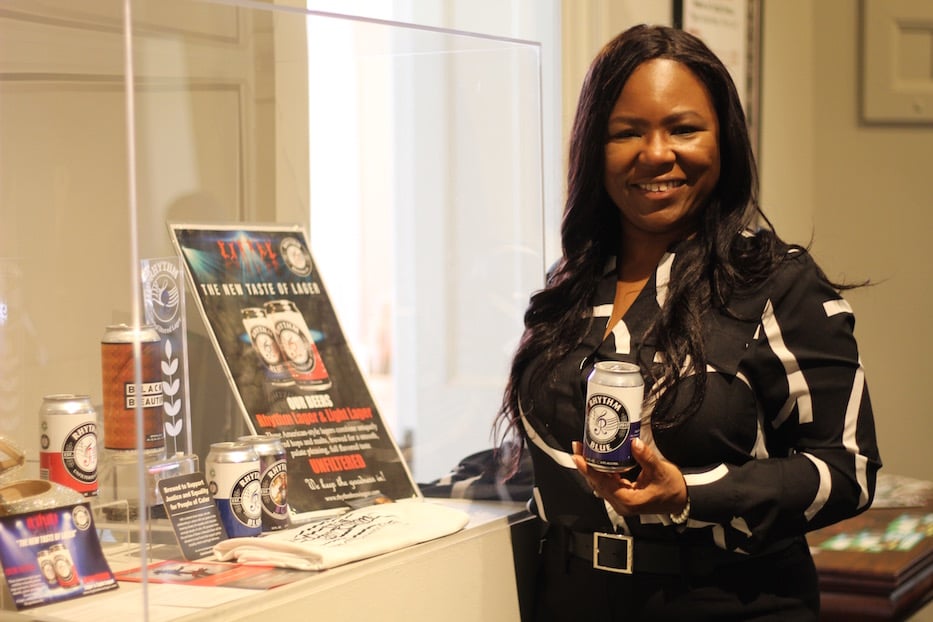 Alisa Bowens-Mercado: "I hope, through this display, that it inspires, empowers and encourages people throughout the community." Lucy Gellman Photos.

In the wide rotunda of the New Haven Museum, history was unfolding. Through plexiglass, a line of four beer cans caught in the light, their color-blocked and puzzle-piece designs glinting as visitors came in close for a look. A vine wove its way up a clear tap handle. Just inches away, a pair of salsa shoes shimmered. For a moment, it looked like they might come to life and start strutting their way through the museum.

Friday morning, Salsera and Rhythm Brewing Co. founder Alisa Bowens-Mercado unveiled a new collection at the New Haven Museum dedicated to her work as Connecticut’s first Black woman brewer. The collection comprises several of her cans, an early prototype of her tap handle, Rhythm Brewing swag and postcards, a pair of dazzling salsa shoes and a sequined red halter dress. The last items are a nod to her first business: when Bowens isn’t brewing, she is known for her work as the founder of Alisa’s House of Salsa in Westville.

“It is an honor to be standing here, and to have my life's passions both in one case together,” she said at the museum Friday. “I hope, through this display, that it inspires, empowers and encourages people throughout the community to just let them know that entrepreneurship, and living your life's passion and your dreams, it can absolutely come true.”

The collection will live in a small display case in the museum’s rotunda through September, and then will go into its archives. Elinor Slomba, a consultant on the project and founder of Verge Arts Group, said that it puts itself in conversation with the exhibition From Clocks to Lollipops: Made in New Haven. She added that several of the items will likely join a future iteration of From Clocks to Lollipops when it is updated. The show includes New Haven’s history of beer brewing, including Yale Brewing Co. and the original Hull’s Brewing Company.

It has been at least a year in the making. Last February, New Haven Museum Executive Director Margaret Anne Margaret Anne Tockarshewsky asked Bowens-Mercado if she would consider donating some items to the museum at a taste-testing event downtown shortly before Covid-19. The interest dovetails in her own effort to document history as it happens. When the museum shut its physical doors during the pandemic, that timeline turned into months.

As they beckon from the case, objects tell a story of Black entrepreneurship and innovation that connects New Haven’s past to its present. There is Rhythm’s flagship brew—an unfiltered lager adorned with a treble clef that dips into a red R—as well as three new flavors that Bowens-Mercado rolled out between early 2020 and this spring. Last year, she released a light version of her signature lager around her February birthday. Then Covid-19 hit, and she pivoted to running two businesses during a pandemic. 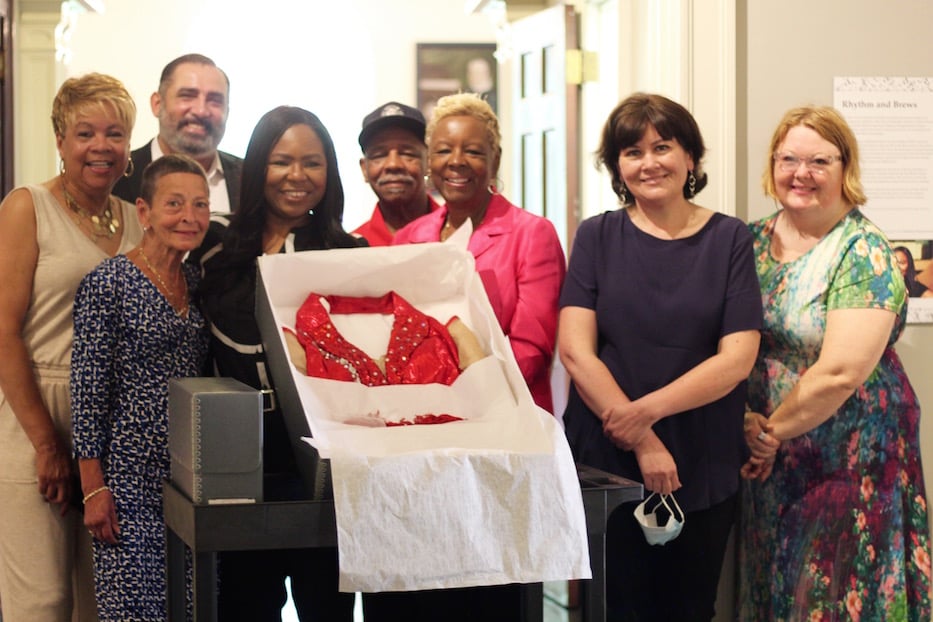 As she turned her studio into a pickup location and applied for an alphabet soup of federal funding, new opportunities sprang up for her to grow the brand. Last summer, she rolled out a silky, coffee-flavored stout called Black Is Beautiful with Two Roads Brewing and the national Black Is Beautiful craft brewing campaign. For her, she said, it is part of how she advocates for herself as the state’s first Black woman brewer—and as a Black woman navigating predominately white spaces in business, brewing, and arts and culture.

She also began work on her BGM Vanilla Porter, a sweet, creamy dark beer that pays homage to her 50 years on this earth with a “Birthday Girl Magic” theme. The beer was brewed, canned and released earlier this year in a collaboration with Black Hog Brewing in time for Bowens-Mercado’s 50th birthday. Friday, she joked that it was only fitting to celebrate that milestone with her face on a can of cold beer.

"It was liquid that was put in a can, but it signified 50 years of the spirit of family, the spirit of entrepreneurship, and where I have been and what we've done in the last 50 years," she said.

The cans are accompanied by an original prototype for the tap handle, designed by ​​Alex Murdoch of MakeHaven, as well as Rhythm Lager swag and a pair of silver rhinestone-studded dancing shoes. Each has a story: she regaled family members with the memory of Murdoch’s first visit to her salsa studio, which resulted in a handle meant to look like it was lit from beneath. 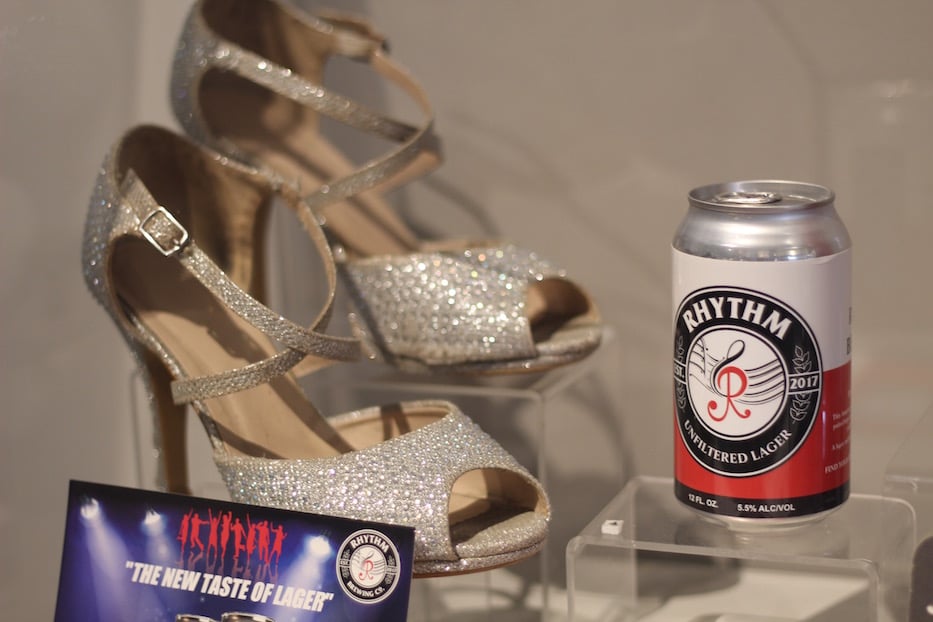 The shiny, high-heeled slippers have carried Bowens-Mercado across stages, clubs, and ballroom floors in Cuba, Puerto Rico, the Bahamas, and New Haven and New York City. When her Westville studio celebrated its 20th anniversary last year—and survived the pandemic—she decided to retire them.

"They were my good luck shoes," she said. She added that she will miss her red dress, “with sequins and glitter and all kinds of glam,” but felt like it was time to hang it up and buy another one for the next decades of her dance career. Friday, she showed it off from the archival box where it will now live, preserved among layers of tissue paper.

Lindy Lee Gold, a senior development specialist at the state’s Department of Economic & Community Development, said that she is thrilled to see the installation at the museum. Gold has known Bowens-Mercado’s family longer than Bowens-Mercado has been alive; her father helped Bowens-Mercado’s dad William get his own business off the ground. Currently, she is working with the brewer to find space for her own tap room in Connecticut. 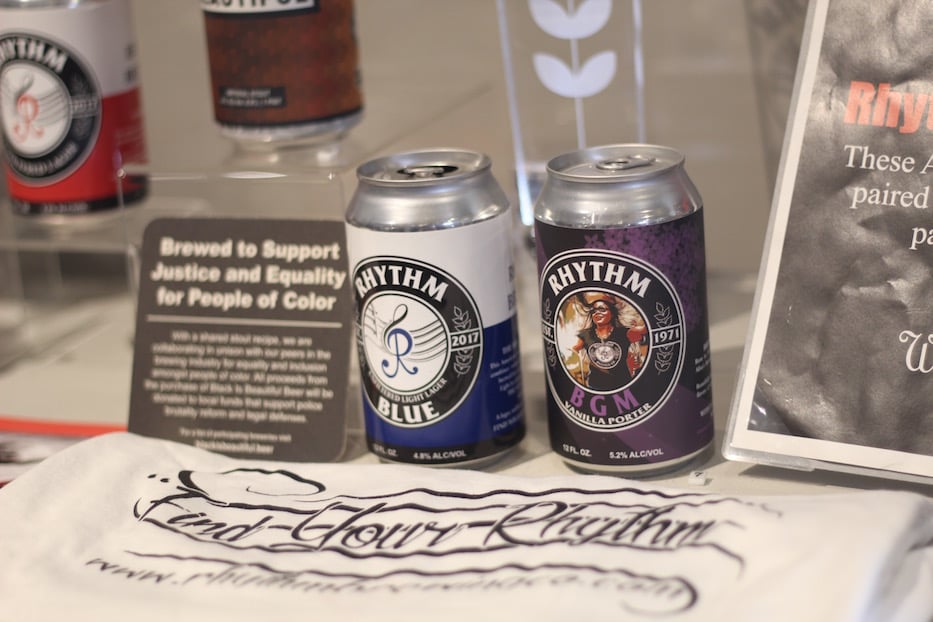 As Bowens-Mercado milled around the case with family and friends, each pointed out something different that caught their eyes. Sharon Gambrell, who met Bowens-Mercado’s mother, Millicent Bowens, in downtown New Haven when the two were 14, said she does not consider herself a beer drinker but drinks Rhythm. After becoming close with the family when she and Millicent worked at SNET, she watched Bowens-Mercado enter the world and grow up.

“She had that drive as a little girl,”  Gambrell said. “I call her my shero, because she never stops.”

Bowens-Mercado’s mother and father studied the cans with delight before moving to the dress, which shimmered even from its box. Millicent Bowens said that she sees the collection as one more ceiling that her daughter—who runs a dance studio, brews beer, roasts coffee, and still makes time for family gatherings each week—has shattered in the city.

“Nothing really surprises me with Alisa,” she said. “For her to be here, it's an amazing accomplishment, and I'm so very proud of her." 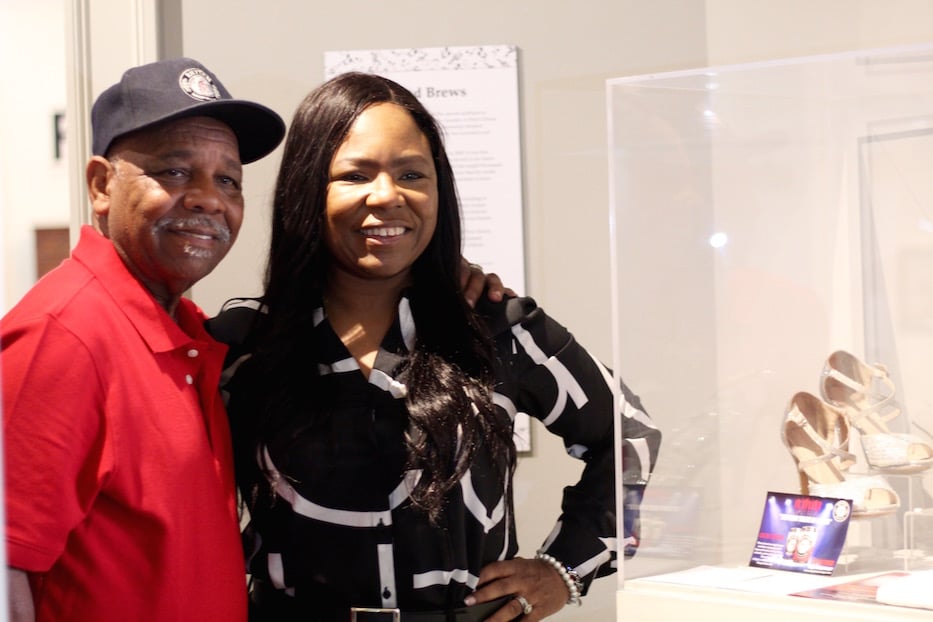 The accomplishment is also part of the museum’s evolving mission to tell the full story of Black inventors, entrepreneurs, and creatives in the city. While New Haveners may now recognize names including William Lanson, Collections Manager Mary Joan Christ acknowledged that the museum has work to do in educating its public—and its own staff—about the Black makers and intellectuals who helped build New Haven.

During its time on display, Bowens-Mercado’s collection will live one floor down from a patent for an early ironing table that the U.S. government issued to Black New Havener Sarah Boone in 1892. Boone, a dressmaker who was illiterate when she migrated from the American South and settled in Dixwell in the nineteenth century, is one of the only Black women inventors the museum has documented record of. Before receiving her patent, she likely learned to read as a congregant at Dixwell Congregational Church.

“It really allows us to document [history] and to inspire our fellow community members to understand what's going on in our city and how special many of our citizens are,” Christ said.

The New Haven Museum is open Wednesday, Thursday and Friday from 10 a.m. to 5 p.m. by reservation only. Click here for more information.