Outdoor Salsa Gets Westville Dancing In The Streets 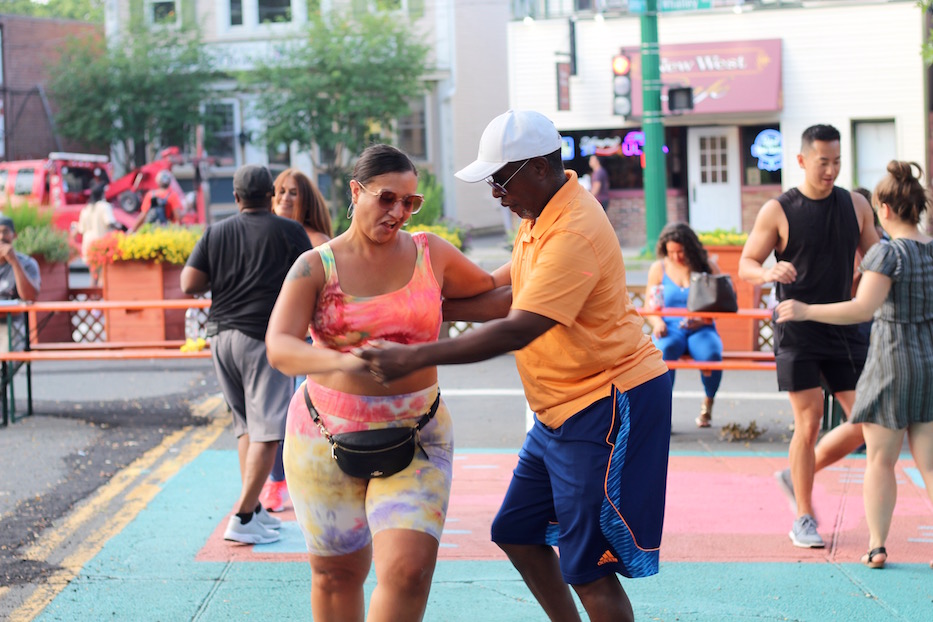 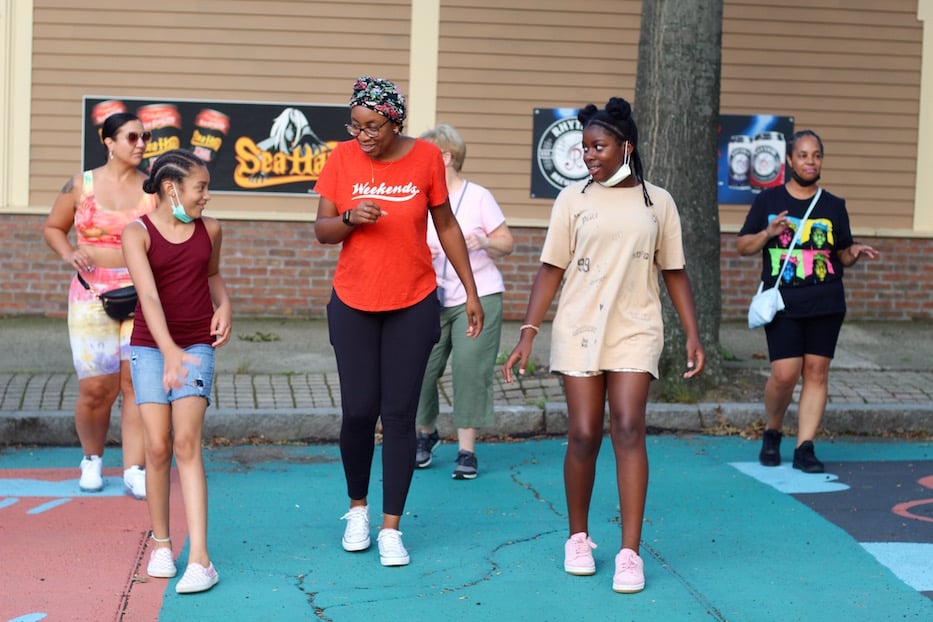 Nicole Shannon leaned into the music and listened to a gentle one-two rhythm blooming across the pavement. On her left, her daughter Ranea stepped forward and glided right into her left turn. On her right, 9-year-old Phoenix Clare pumped her arms and flexed her ankle right on time. A huge pink and turquoise bird pulled its wings into its body on the street mural beneath them.

“Let your brain talk to your feet!” cried instructor Alisa Bowens-Mercado. “Are we ready for that left turn?”

Tuesday night marked the now-weekly Salsa in Westville Village, a celebration of swaying hips, declarative footing and cautious partner work from Alisa’s House of Salsa and the Westville Village Renaissance Alliance (WVRA). Each week, instructors hold a short salsa lesson, followed by hours of dancing in the street. 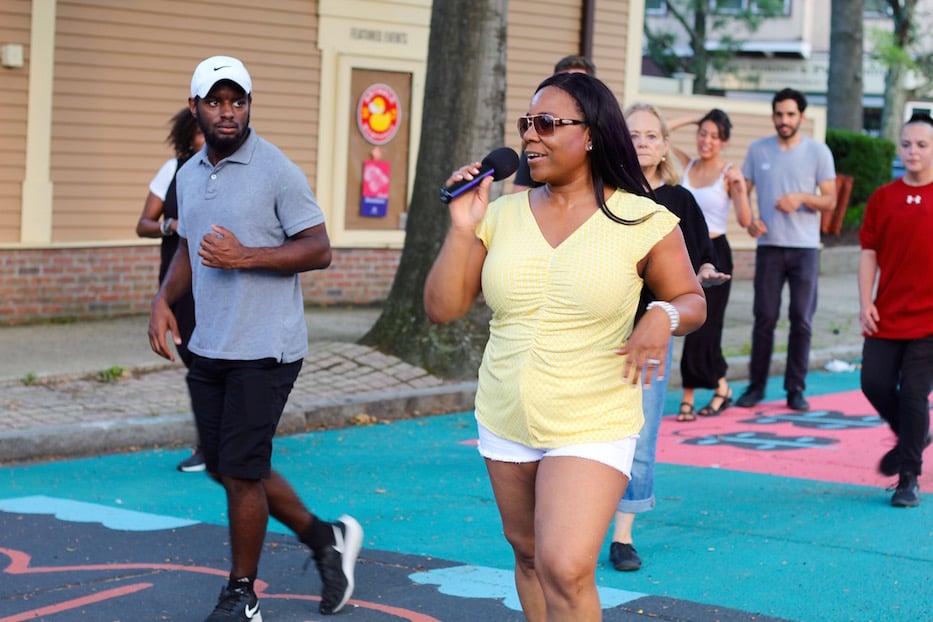 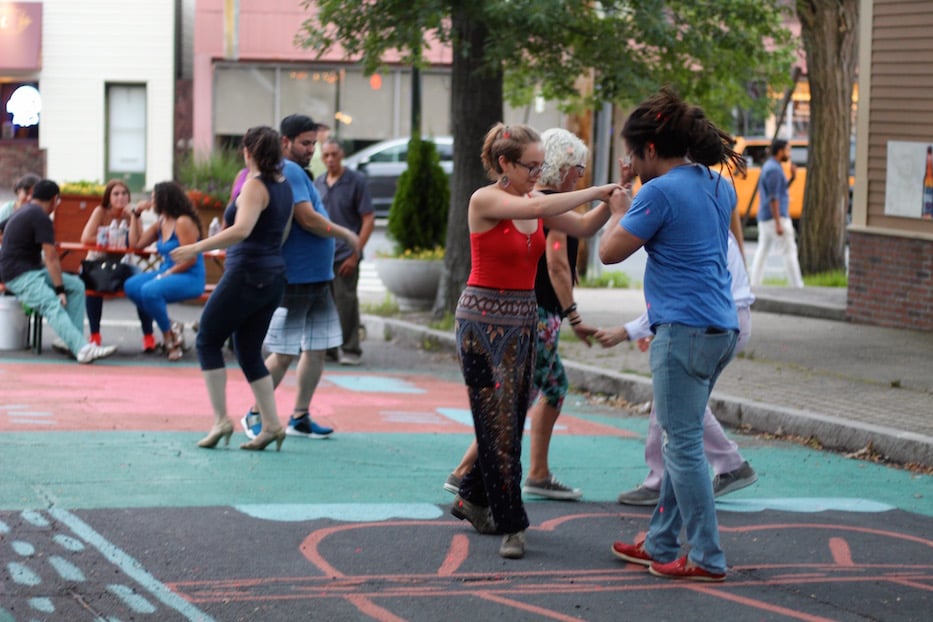 While Bowens-Mercado regularly teaches, she has shared the series with Jason Ramos and Amanda Duvall of Baila Con Gusto CT. It takes place on a new pedestrian-friendly section of Central Avenue, which became a patio during this year’s ArtWalk festival and never reopened to traffic.

“It’s one of those things where you’ve dreamt about it while everything was shut down,” she said between dances, half-shouting over the music. “It really makes my heart very full. I used to look forward to Fridays, and now I look forward  to Tuesdays. I wanted this. The community wanted this. Hopefully, it will go until there’s snow on the ground.”

Before Tuesday’s session was cut short by a downpour, dozens of New Haveners came out to dance. As DJ Edgar laid down a beat with pumping bass, Shannon slid into formation with her 9-year-old daughter and her daughter’s best friend Phoenix, who is also nine. Both Ranea and Phoenix are students at Tia Russell Dance Studio but wanted to learn a new form.  The three watched Bowens-Mercado carefully, studying each move. 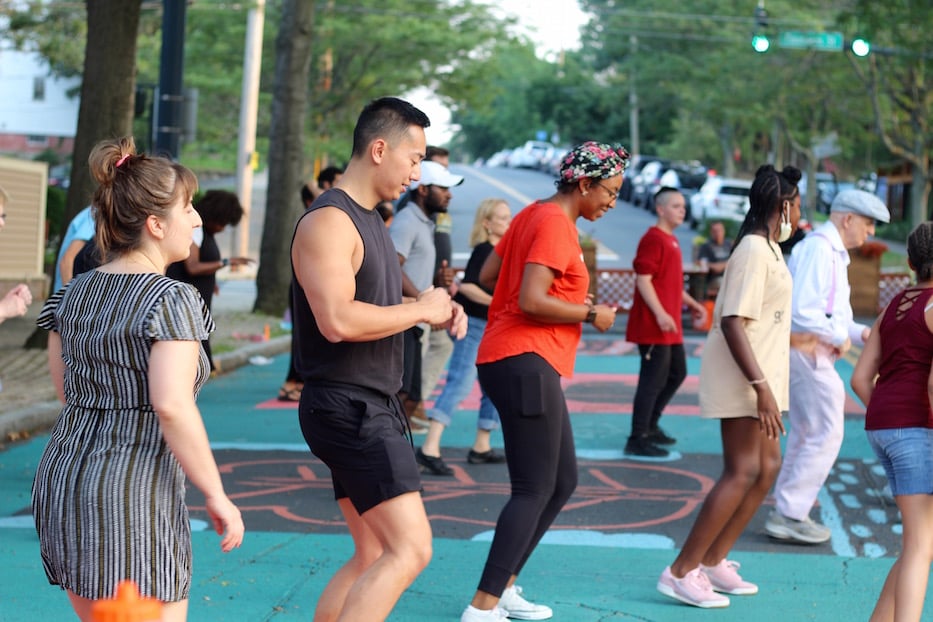 A burst of brass blasted over the speakers. The three stepped forward, then back, sinking into the rhythm with dancers from their single digits into their 80s. They bent their arms and worked the wrists, leaning forward just enough for a little shoulder shake. Dozens of feet bounced on the pavement.

“Ladies, pretend you’re giving your hair a shampoo!” Bowens-Mercado shouted over the music. Shannon and the girls laughed, lifting theirarms gingerly over their hair and pulling them back.

A Westvillian who was born and raised in New Haven, Shannon said that she had been thinking about taking lessons at Alisa’s House of Salsa for a while, because “I always wanted to try something different.” When she saw a posting for the event in a community calendar, she decided to go and take some of her youngest dancers with her.

“It’s good for the kids to come out and experience another culture,” she said. Phoenix added that the group would definitely be back—and probably signing up for lessons at the studio as well. 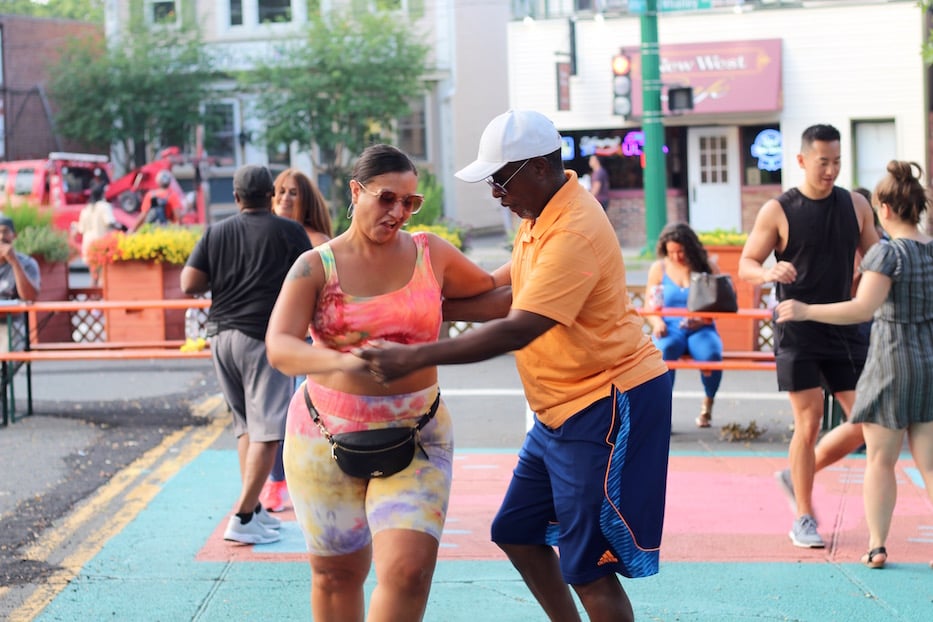 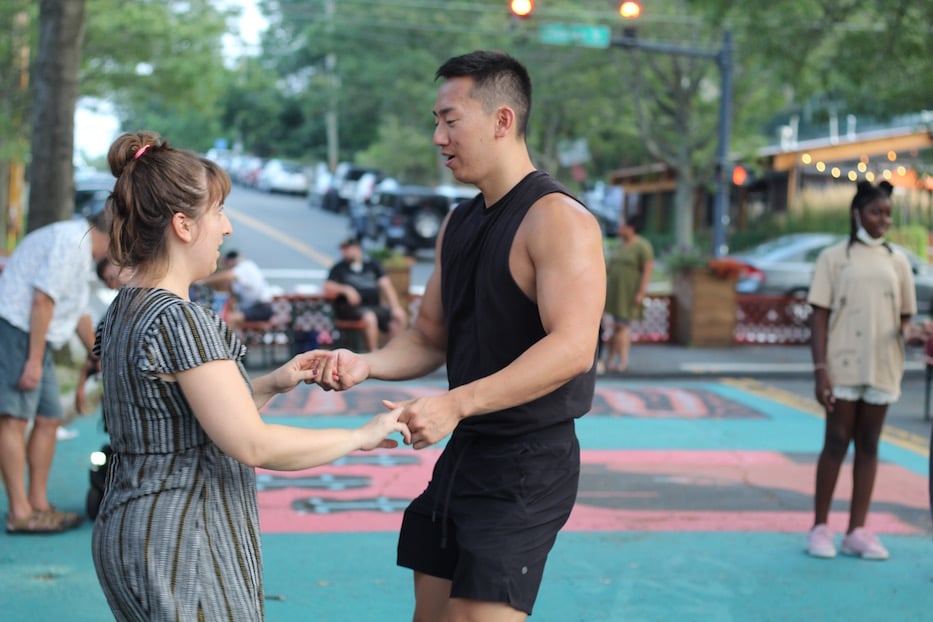 Around them, dancers had switched from salsa to cumbia. On a grassy stretch beside the patio, a hesitant attendee tried out the footwork methodically before joining the group. A couple clasped hands as they crossed the street, and started dancing by the time they reached the sidewalk. Someone passed out sweaty, cold cans of Bowens-Mercado’s Rhythm Lager close to the DJ booth.

"Everybody say ‘Wepa!’" Bowens-Mercado instructed as she swayed.

She danced over to 25-year-old Andrew Burbank, who was trying out salsa moves in his motorized wheelchair. A resident at nearby Chapel Haven, Burbank had come to the lesson after receiving a personal invitation from the salsera earlier in the afternoon. Bowens-Mercado said that when saw him and his dad on Westville’s main strip earlier in the day, she ran out of her studio and asked them to come.

Burbank said that he was excited to be back in a hopping, mellifluous Westville Village after months of quiet and uncertainty during the pandemic. Often, he said, people assume that he’s not interested in movement because he has Cerebral palsy and uses a chair. It couldn’t be farther from the truth. 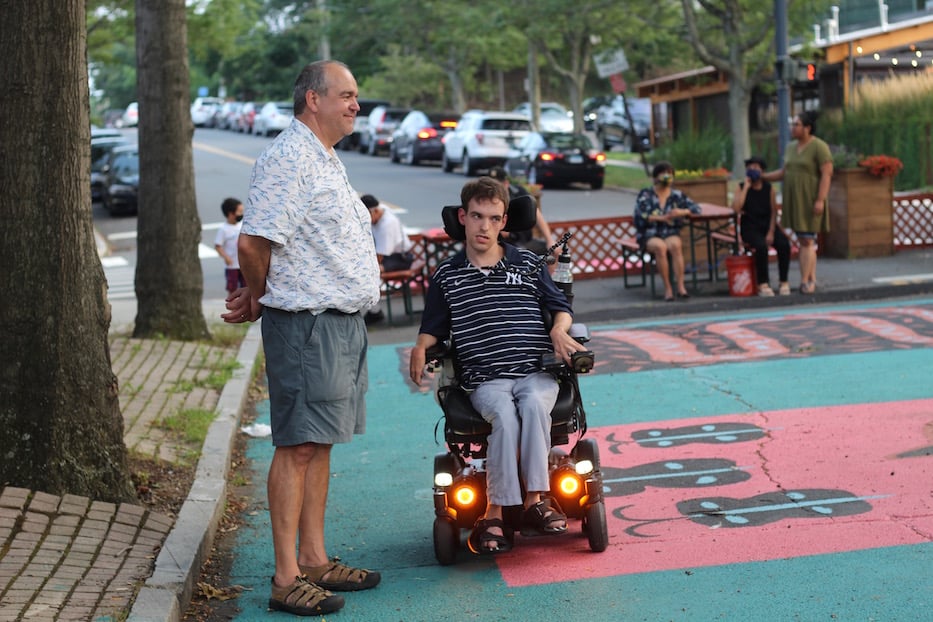 Andrew Burbank (at right) and his dad.

“Dance is great exercise, especially for my physical limitations,” he said. “I have CP, which involves the inability to move muscles, and that my brain works differently. But that doesn’t mean that I can’t do anything.”

“Here, it’s never boring,” he added. “Everything is wide open.”

In a thicket of dancers, Bowens-Mercado whirled over to Richard Lake, a retired jazz drummer who turned to salsa as his second act five years ago. A resident of Bridgeport, Lake regularly drives to salsa lessons around the state, and has been coming to Salsa in Westville Village since it began in June. He said that he’s savoring the ability to do partner work after months of lessons on a screen.

“It’s good to be back,” he said. “It’s all about coming out, enjoying the people, enjoying the music—there’s a lot going on. It’s about trying to learn how to communicate with a woman as your instrument.  I just try to learn stuff, and keep it in my repertoire.” 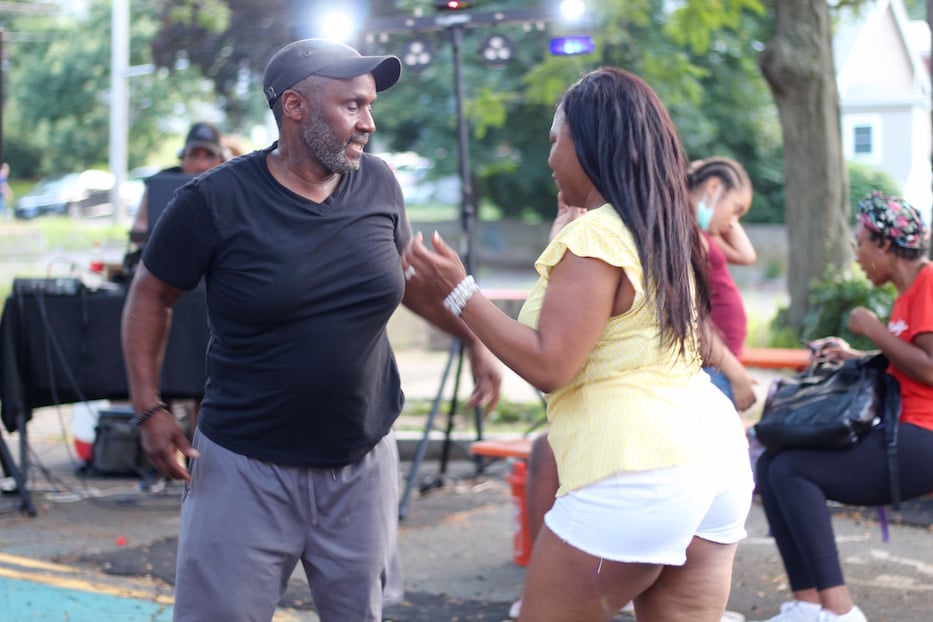 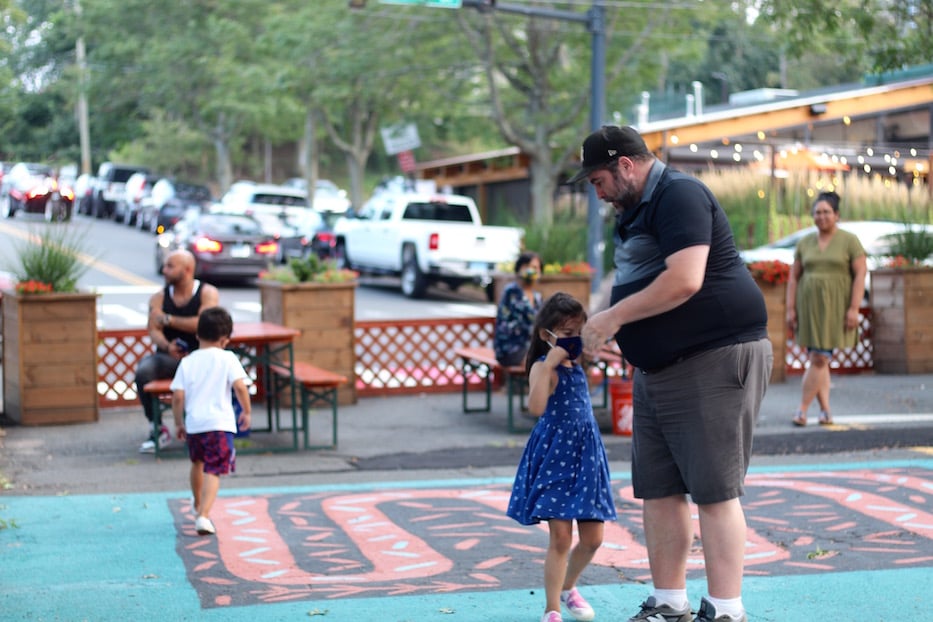 He’s especially grateful for outdoor lessons. Rattled by the spread of the highly contagious Delta variant, he prefers them to long, sweaty salsa sessions indoors. During the pandemic, a single, masked partner from his salsa group would come to his home to practice moves. It was the only exposure to live dance that he had for over a year.

As he danced from partner to partner, a salsa version of George LaMond’s “No Matter What” sailed over the street. Trumpets shrieked over congas, making it it impossible to stay still.

Some of Westville’s pint-sized dancers also came out for the event. Sean and Gladys Finnerty, who live just up the street, brought their children Vivian and Cormac to salsa, as they do almost every week. Sean, who is a stay-at-home dad, said that the summer series, paired with the neighborhood’s seasonal Hi-Fie Pie Fest each Monday, is “the best thing about living in Westville.” 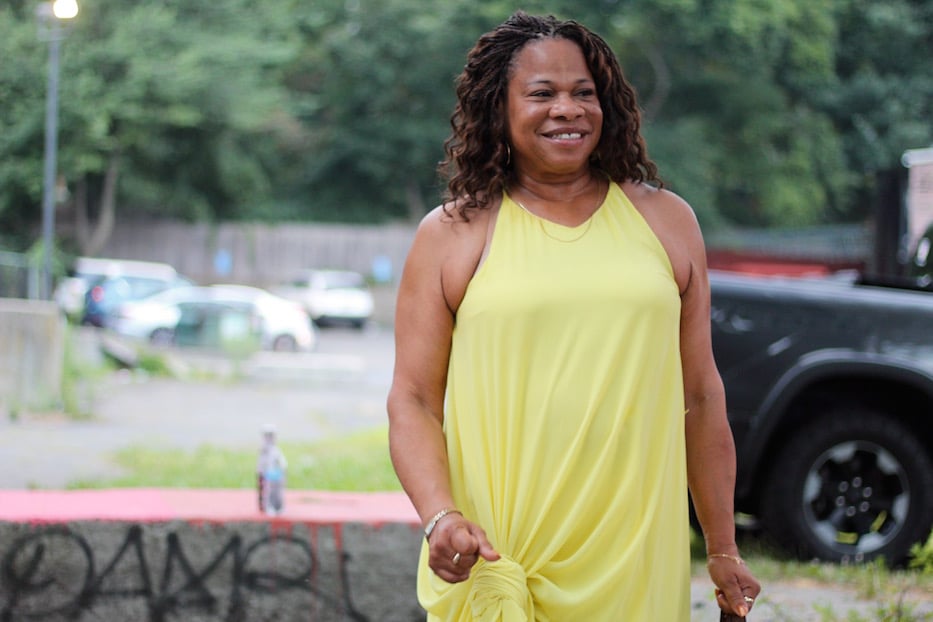 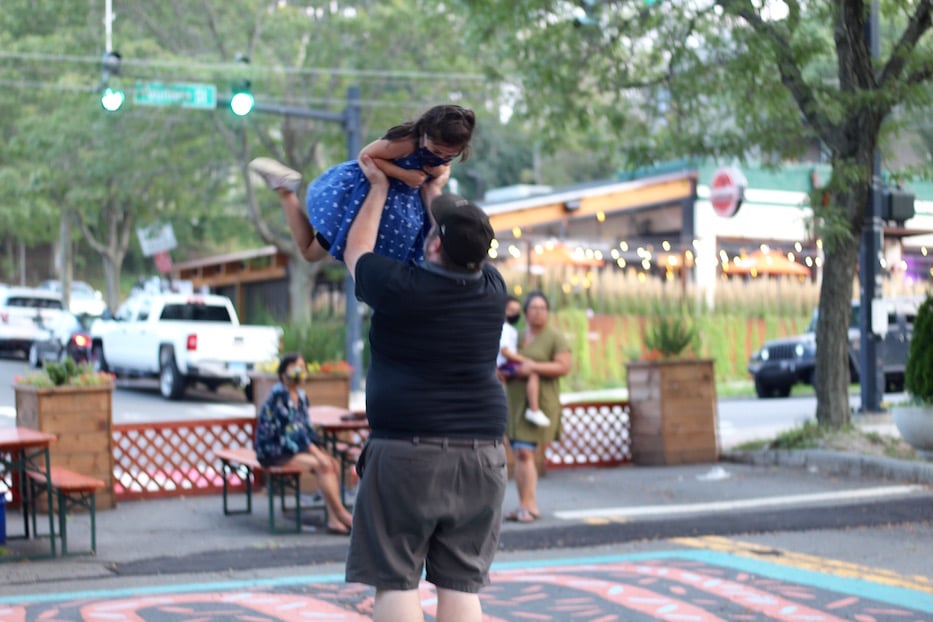 Top: Sean and Vivian. Bottom: Nancy Morgan, who just returned to New Haven after years away.

Tuesday, he and 6-year-old Vivian slowed down their salsa steps on the far end of the patio, trying out a lift that seemed ready for the U.S. gymnastics team. As Bowens-Mercado took dancers through a rolling back-and-forth movement, he and Vivian glided in tiny, delicate steps from side to side. Then she was in flight once more.

As dusk fell over the street, dancers twirled, switched partners, and sweat out the past months of isolation. Some came in closer, emboldened by the heavy, earthy smell of rain that fell over the street somewhere near 8 p.m. Others kept their masks on for the whole night.

Nancy Morgan, who grew up in the Hill but has been in England for the last several years, said she felt like the community had welcomed her back.

“There’s something to come home to,” she said.