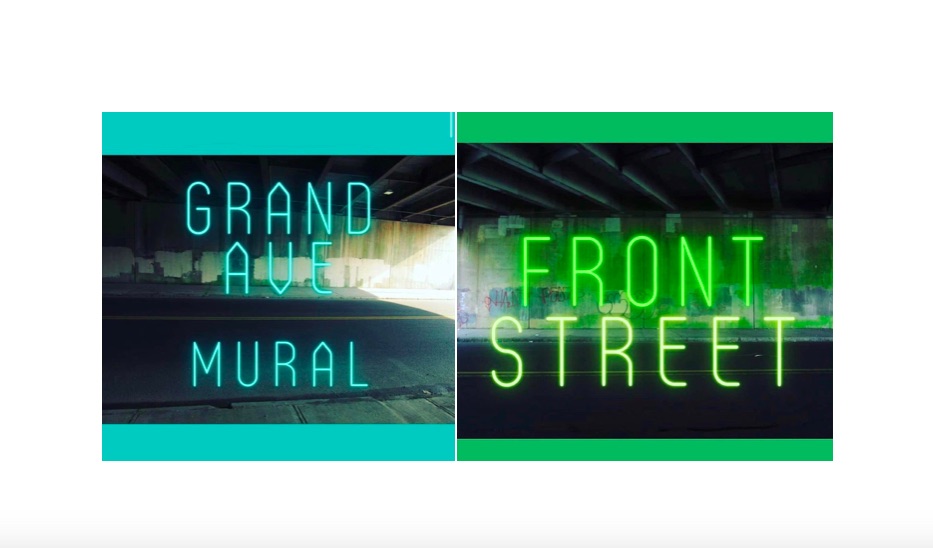 A new public art collective with an anti-bias, anti-racist lens will be bringing three new underpass murals to the city this spring—with an unexpected $100,000 leg up from IKEA. As members work with city and state officials to bring the murals to life, they are shifting the focus on how New Haven does public art.

That collective is Nu Spiral, a group of artists and organizers including Isaac Bloodworth, Joy Meikle, Ala Ochumare-Harris and MiAsia Harris. Founded in response to CT Murals, the collective is now working with the city to install murals on upper Whalley Avenue, Grand Avenue near Franklin Street, and Front Street at Middletown Avenue. It is named in honor of Spiral, a collective of Black artists that formed in New York City’s West Village during the 1960s.

A call for both the Grand and Front Street underpasses remains open through Feb. 5; artists can apply here. Artists Marsh (​​a.k.a. Candyce Marsh John of Marshun Art) and Jesse Wolf have been selected to start the Whalley Avenue mural in the spring. Both worked on a Black Lives Matter mural downtown in October 2020.

“I felt like this was the perfect opportunity to honor our ancestors,” Ochumare-Harris said of Nu Spiral’s birth in a recent Zoom call with all four members. “A lot of those artists are still living or recently passed away, and it kind of fit, thinking about being an interracial collective and the stuff that they shared.”

The project is funded by a one-time donation of $100,000 from the IKEA U.S. Community Foundation’s “Pay It Forward” campaign. The campaign, which is now active in 27 U.S. states, seeks to reimburse state governments for the cost of unemployment insurance to IKEA employees furloughed in the early days of the Covid-19 pandemic. Of roughly $1 million that came to the State of Connecticut, $100,000 went to the city’s Department of Arts, Culture & Tourism.

Jonathan Dach, policy director for Gov. Ned Lamont, confirmed Wednesday evening that the state received close to $1 million through the initiative, all of which will be distributed in New Haven. Nu Spiral is working with New Haven’s Department of Arts, Culture & Tourism, New Haven City Plan Department and Connecticut Department of Transportation to bring the project to fruition.

The collective grew out of members’ own experience navigating, and sometimes feeling frustrated with, New Haven’s public art landscape. Often, they found that artists who landed public art commissions didn’t live in or reflect the neighborhoods where they were working. City residents weren’t always asked for input before a new work went up on their block or in their neighborhood. As an emerging public artist himself, Bloodworth has watched as artists are underpaid, not paid at all, or asked to include the cost of materials in their already-stretched budgets.

That included most recently last summer, during a collaboration with CT Murals in the city’s Hill neighborhood, he said. While creating work for the organization’s 2021 “Racial Equity Mural Tour,” on which both he and Meikle did work, Bloodworth said that he faced discrepancies in both payment and project assistance as a Black artist.

In an email Thursday evening, CT Murals Founder Matt Conway maintained that “RiseUP's commitment to racial equity in public art is demonstrated daily through our diverse team of artists we support across the state of Connecticut.”

Last summer, the four co-founders began to talk about forming a collective that centered fair compensation of artists and projects by and for members of the community. In what Cultural Affairs Director Adriane Jefferson called “a matter of perfect timing," her department received the $100,000 from the state, and needed an entity to manage the project. Nu Spiral’s first formal commission was born.

“We [Nu Spiral] were created because we were harmed in different, various ways, and we are making sure that we’re intentional in not recreating that harm,” Ochumare-Harris said. “We have talked to folks from every neighborhood that we're going to be doing a project in. … so that it can be equitable, so that there's as many community voices in the process as possible.”

As they took on the funding, Nu Spiral members designed a project rollout meant to support new and emerging artists and pay people equitably for their time and labor. In addition to stipends for “lead” and “assistant” artists, each underpass mural has a separate materials budget. 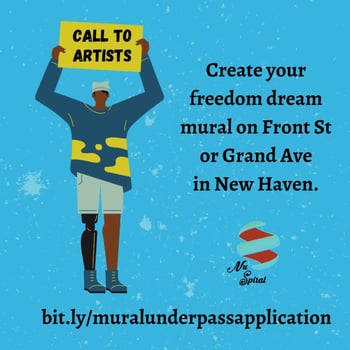 While lead artists must have formal mural experience, assistants do not have to. Bloodworth emphasized that “we're trying to meet the artists where they're at,” and that members of the collective are willing and able to help applicants get from a storyboard to a finished project.

“Please apply,” he said, speaking directly to artists still on the fence. “Don't let white supremacy and whiteness let you doubt yourself. Please don't put barriers in front of yourself.”

All four members of the collective also pay themselves for the time that goes into planning the work, which includes regular meetings with the City Plan Department and state Department of Transportation.

The collective launched the project formally last August with the theme: “What does liberation for Black, Brown and poor folx look like?” In addition to themselves, they have a peer review process that includes artists and activists Aaron Jafferis, Ashleigh Huckabey, Jahnice Cajigas, Dave John Cruz-Bustamante, and Amira Brown.

At first “we learned that people can be very literal, because we have never lived liberation,” Bloodworth said. The team added prompts including “When you imagine being freer than you’ve ever been, what sensations do you notice in your body?” and “Picture a world without police brutality … what do you see?” They uploaded photos of themselves intentionally resting, in a nod to the idea that rest can be a form of resistance.

They held outreach sessions on social media and talked about their own visions of liberation, from the taste of Bloodworth’s grandmother’s macaroni and cheese to “a group of Black folks twerking and dancing like, in the middle of the street or at the cookout,” Ochumare-Harris said. They brought Octavia Butler, bell hooks, Audre Lorde and Adrienne Marie Brown into the mix. And they watched as submissions started coming in.

Jefferson, who recently announced the city’s first-ever cultural equity plan, said she’s excited to see the three murals evolve. After years managing arts funding in both city and state government, she bristles when she hears the words “creative placemaking.” For her, it has become synonymous with the practice of allowing an artist or team of artists—often but not always white—to parachute into a given community, leave their mark, and then leave. She gravitated towards Nu Spiral because it was of New Haven.

“So often you have people going into a community, telling them what makes a place a place,” she said in a phone call Tuesday. “This is bringing the right voices to the table.”

The $100,000 from IKEA U.S., meanwhile, is only a slice of the overall $1 million in funding that New Haven is receiving from the “Pay It Forward” campaign. Calling it “​​an act of impressive corporate Scandinavian generosity,” Dach said that other recipients include citywide workforce development efforts and the New Haven Legal Assistance Association. The state is planning to release a full list of recipients after it has figured out how to distribute a remaining $80,000.

“We are appreciative of the ongoing support from the state of Connecticut including the unemployment funds paid to our co-workers who were furloughed in the early weeks of the pandemic,” said Quiñones. “People are the heart of our business, and the state unemployment benefits helped our co-workers during a difficult time. We now have a better understanding of the impact of COVID-19 on our business, and we’ve decided to ‘pay it forward’ in our local communities.”

A call for both the Grand and Front Street underpasses remains open through Feb. 5; artists can apply here. Follow the collective on Facebook or Instagram at @nuspiral.collective.