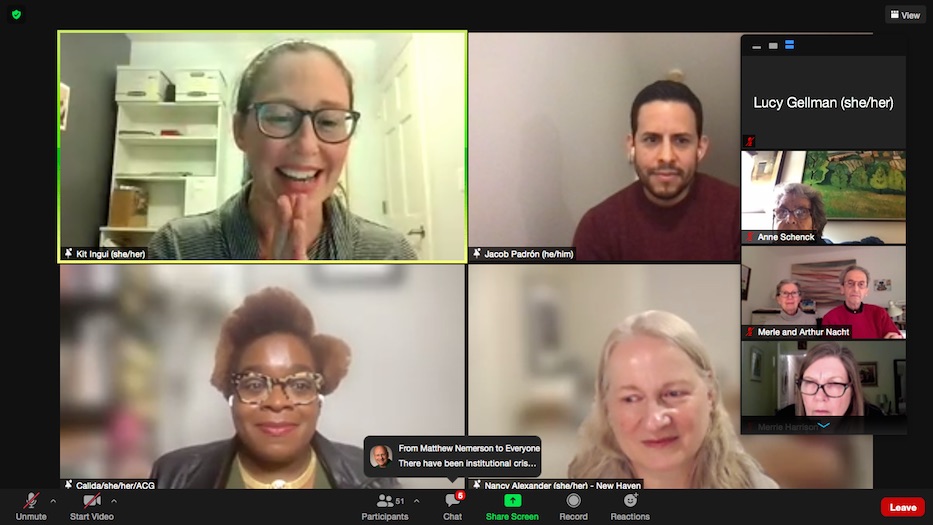 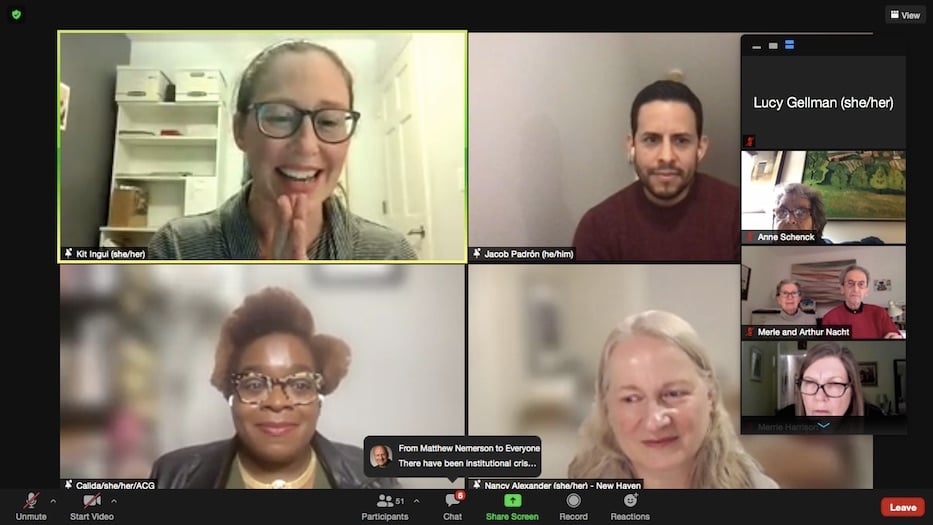 It took the chat box a moment to warm up. But once the questions started coming, they didn’t stop.

A steady stream of them—and a few answers—defined Long Wharf Theatre’s “Town Hall” meeting Thursday night, the second of four public events since the regional theater announced its move to itinerancy in late February. Two weeks after the first meeting, board members, Long Wharf staff, and artistic leadership returned for a more open discussion, much of which transpired in the chat.

The theater ends its lease at 222 Sargent Dr., its brick-and-mortar home of almost six decades, in June 2022.

In addition to an open chat, the theater also provided American Sign Language (ASL) interpretation and closed captioning. Like the first session, the theater kept attendees muted for the entirety of the evening—with the exception of one, who praised the theater effusively and looked to the move as a mechanism of survival. Spanish translation was unavailable.

Speakers included Board Chair Nancy Alexander, Artistic Director Jacob Padrón, Managing Director Kit Ingui, and Arts Consulting Group Vice President Calida Jones. Jones, who also serves as president of the Connecticut Arts Alliance, doubled as a facilitator for the evening. The next public input session is scheduled for April 2 from 2 to 3 p.m. at the Mitchell Branch of the New Haven Free Public Library. Register here. 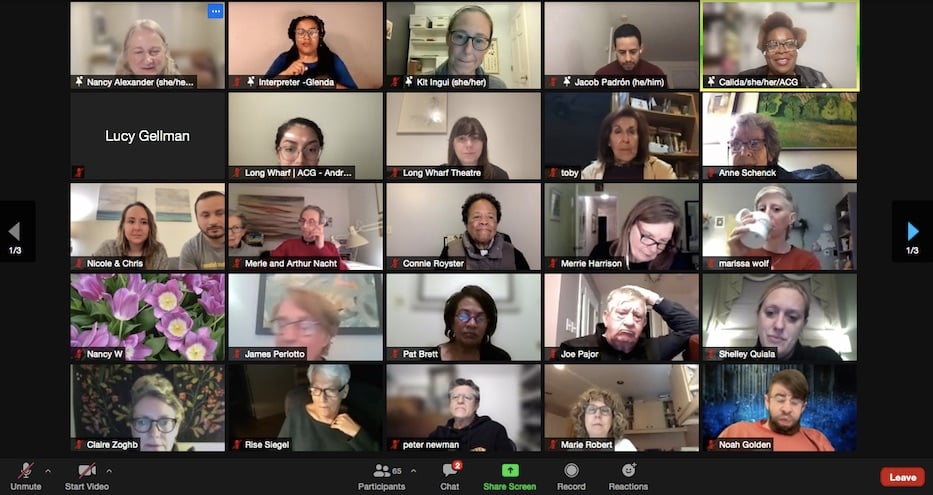 Among the 65 participants, their faces dime-sized across a neat grid of Zoom squares, were Long Wharf board members, artistic and institutional partners, longtime patrons, creative collaborators, and regional theater staff from across the country. They ranged from David Mendizábal, who directed On The Grounds of Belonging at the theater three years ago, to former city Economic Development Administrator Matthew Nemerson to theater fans from across the state.

“We are building on the history of legacy, of innovation, of so many things,” Padrón said. “So in many ways, tonight, in community, is about writing the next chapter together.”

For the first 25 minutes of the evening, the chat remained quiet as hosts recapped the material they covered in the first session, including a decades-long struggle with financial uncertainty (read more about that here) that the pandemic exacerbated. Between March 2020 and March 2022, Long Wharf shrunk its staff from 65 to 25, a number that is now closer to 30.

Ingui said that while the theater survived Covid-19 through a mix of state and federal funding, it could no longer fill a 400-person theater. Both she and Alexander added that leadership at the theater was increasingly aware of how inaccessible the space was to youth, select artists, and those walking or using public transportation. They were looking increasingly at a financial reality in which they had to take out a loan, or dip into the theater’s endowment.

“Our financial model is not working, and it has not been working for a long time,” Alexander said, adding that there was no single reason for leaving the space, but a constellation of them. “We are on very solid ground right now and this is a good moment for us to be taking off and starting to experiment.”

Why Not Consult The Community First?

No sooner had Jones opened the floor to questions than attendees wrote in with a mix of grief, frustration, enthusiasm and cautious optimism at Long Wharf’s decision to leave its longtime home at 222 Sargent Drive. Some responded directly to Padrón, who promised that the itinerant model would allow Long Wharf to be a “big tent,” in real time.

“The thing that I want to make clear though as we think about our future is we are going to continue what we are known for, and that is making great theater,” he said. A flurry of responses began to fill the chat one by one.

“That's the most important [thing] for us to hear: ‘Great Theatre,’” wrote James Perlotto, chief of student health and athletic medicine at Yale University Health Services.

“It's not too late for the community to save Long Wharf, if only Long Wharf will let us save them!” pushed back Andrew Giering, a public defender who grew up in West Haven and now lives in New Haven’s City Point neighborhood. “Please don't give up on New Haven.”

“I'm moved and excited by Long Wharf's commitment to New Haven - What I heard Jacob say is that this move is a path forward for the next, healthy, vibrant chapter,” wrote Marissa Wolf, who grew up in New Haven and is now the artistic director at Portland Center Stage.

Not everyone was so sure, it seemed. Giering pointed to the voices and faces that weren’t in the room—Long Wharf’s longtime neighbors in the city’s Hill South community. In five years, he wrote, he has never seen a representative of the theater at a Community Management Team (CMT) meeting for the neighborhood. In the past two years, the monthly meetings have continued on Zoom, with frequent visits from nearby institutions including the Wilson Branch of the New Haven Free Public Library, Yale New Haven Hospital, and Clifford Beers Clinic.

“If this is really about community, why wasn't the community consulted before the deal was done?” he asked in the chat. “Why didn't Long Wharf hold town halls before, not after, this decision was made?”

Alexander was the first to jump back in. She described making the news public as a matter of “tricky timing, because we could not reveal to the [Food] Terminal that we were leaving until we were sure we were leaving.” Both she and Ingui added that Long Wharf did hold a number of discussions and focus groups with artistic partners and city officials—and that they are planning to hold several public input sessions as they design new programming over the next year. Beyond the next two, they did not suggest when those might be.

“At least while I’ve been the new artistic director, I’ve made a point to make sure I wasn’t sitting behind my desk,” Padrón said. “We did talk to community [members]. To artists. To local leaders, to city officials. It wouldn’t have been a good look for the organization to have made the decision without those relationships.”

Hosts declined to name any of those partners in the public session. Those groups did not include several of Long Wharf’s own employees, who were notified the day before the New York Times broke the story. Ingui has since said that it is too early to tell whether the new model will lead to layoffs.

In the chat, other attendees expressed frustration that they’d been kept in the dark as Long Wharf struggled with its finances. Claire Zoghb, who worked as Long Wharf’s graphic designer from 2008 until June 2020, asked what would happen to staff (that question remained unanswered at the end of the night). New Havener Dawn Bliesener said that she understood that Long Wharf had made its decision, but wanted more clarity on a plan for sustainability.

Max Hunt, who worked at Long Wharf as company manager until last week, asked why the theater couldn’t have said it was considering leaving the terminal without endangering its lease. At times, it felt like attendees, flustered that their mics remained off, were gradually raising their voices through their fingertips. Sometimes as many as nine comments came into the chat in under two minutes.

“WHY are you just now revealing it is all financial??” wrote Joel Stedman, a producer and director based in Guilford. “I believe if the community knew months ago, they would have contributed.”

A Nationwide Challenge For Regional Theaters 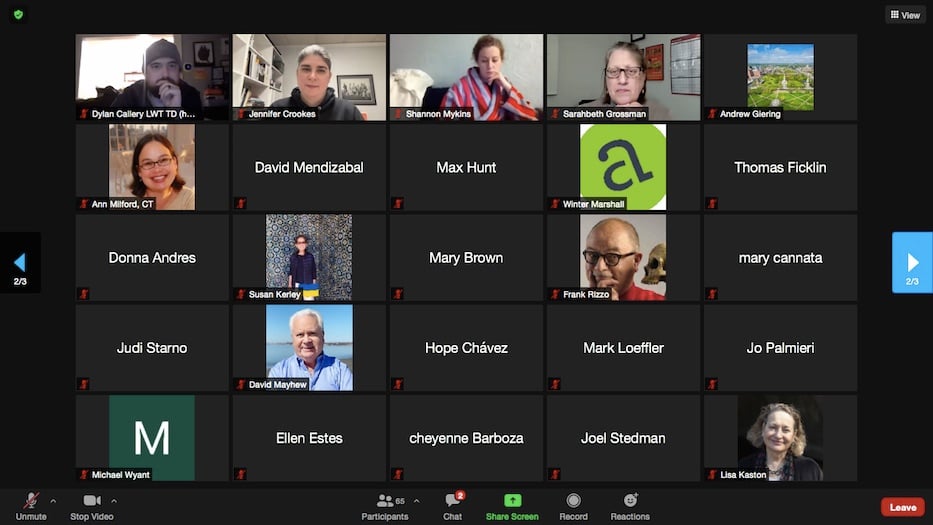 At times, it was as though a dark, heavy curtain parted in the chat, and a pale, bright ray of light came through. Looking to the Kansas City Rep, Wolf said that many regional theaters, including her partners in the League of Resident Theatres (LORT), are also experimenting with new partnership and performance models.  Doug Clayton, senior vice president of Arts Consulting Group, named Actors Theatre Louisville and the Repertory Theatre of Saint Louis as two spaces thinking about theater beyond their traditional homes.

“It's interesting to think that both the art/storytelling/theater the and context can change,” wrote Shelley Quiala, executive director of the International Festival of Arts & Ideas. “In many ways it is always changing. An audience changes the show with every live show. What happens when the context/space changes? This kind of thinking is happening all over the world in places that can't work with fixed locations.” 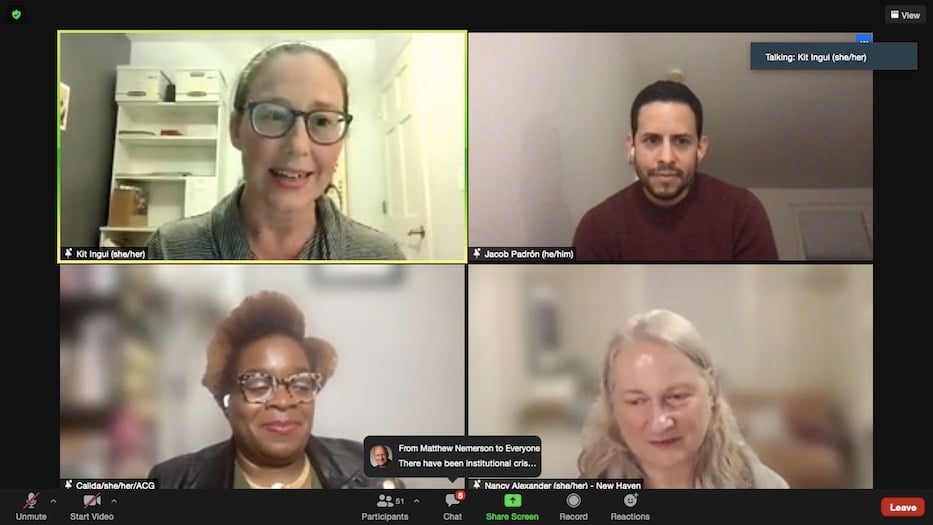 Others simply asked for more clarity, from potential new partnerships and performances to strategies around audience retention and growth. Nemerson, who served as the city’s economic development administrator from 2014 to 2018, wrote that Long Wharf’s move from the Food Terminal “has been an understood future” for years, since the theater considered the former New Haven Coliseum Site over a decade ago.

And yet, he continued, “for many of us baby boomers we are open to new things but we do need to have a language of meeting that is perhaps less vague and open ended.” He suggested that Long Wharf might balance out its interest in new, innovative and devised theater with classic and 20th-century plays, as a way to keep some of its longtime audiences.

“We can fix what you guys…I won’t say broke that would be unfair…but how can this be our problem to solve - be bold!” he wrote. “Tell us what you really think…which I have not heard yet.”

Padrón, who has cast a very wide net for what performances might look like—bars, jazz clubs, parking lots, public green spaces and state parks are all on the table, he said—addressed Nemerson specifically across the virtual distance. He noted his own love for Shakespeare and inclusion of classic works in his first planned season, which became an early casualty of Covid-19 in March 2020. Before that season was canceled, it included George C. Wolfe’s jazz musical Jelly’s Last Jam and Shana Cooper’s A Night’s Dream, an adaptation of William Shakespeare’s A Midsummer Night’s Dream.

“We have to be better architects because the stage is a place to hold all of our stories,” he said.

On April 2, Long Wharf will hold a third "Town Hall" (and its first in-person session) from 2 to 3 p.m. at the Mitchell Branch Library at 37 Harrison St. in Westville. Then on April 7, it will hold a fourth and final session from 7 to 8 p.m. at its 222 Sargent Dr. building. Register at the theater’s website.