School Libraries Get An LGBTQ+ Assist 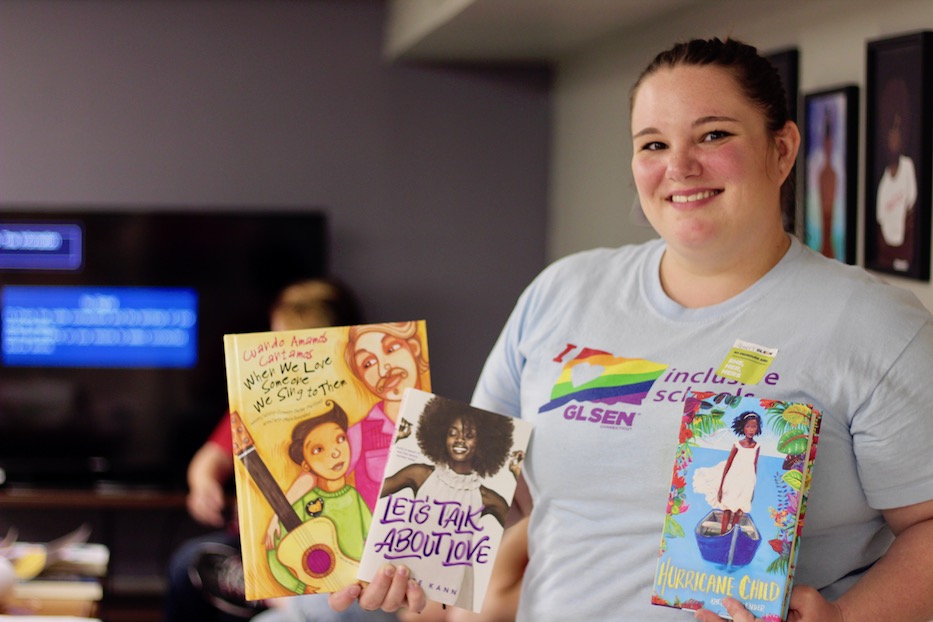 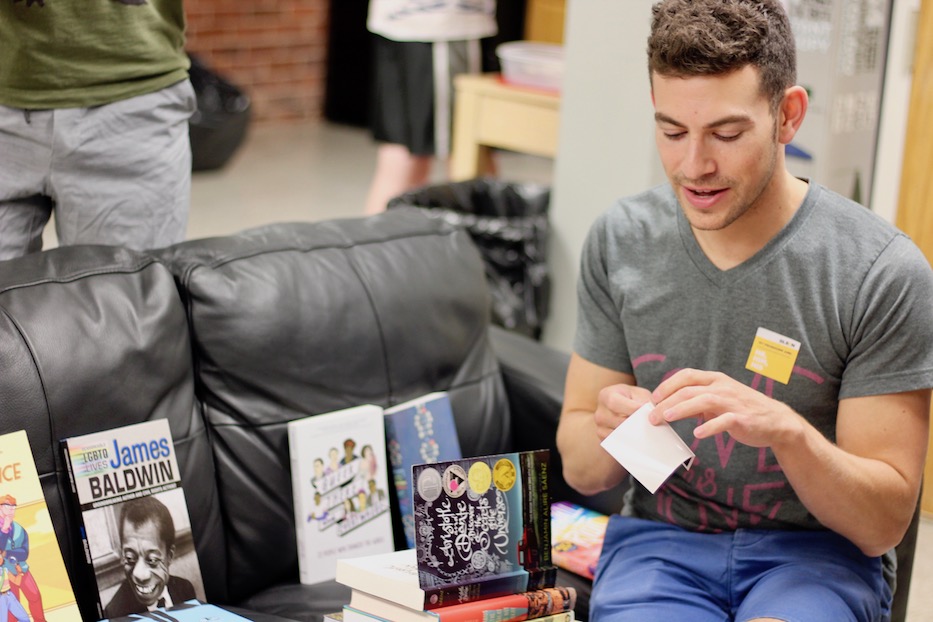 The boxes were packed one by one in neat cardboard rows. In one, James Baldwin traded advice with Beyond Magenta author Susan Kuklin about transphobia and American politics. In another, The Color Purple’s Celie sidled up to a history of the Stonewall Riots. In another, Julián and his abuela made their way to the beach, fluent in both Spanish and Mermaid as their toes dug into the sand.

This week, those 120 boxes will be finding new homes all over the state as part of the Rainbow Libraries Community Reads Project, an initiative of GLSEN Connecticut that puts grade-specific LGBTQ+ books in Connecticut public schools, libraries and LGBTQ+ community centers. Sunday, volunteers from GLSEN Connecticut gathered at the New Haven Pride Center to pack the boxes, which will add a total of 1,200 books to schools and libraries around the state. According to GLSEN member Michael Rady, who spearheaded the project, it is the first initiative of its kind in the country.

Ashley Holbrooks, who leads the state’s all-volunteer chapter of GLSEN, said the libraries are designed to fill a literary, educational and emotional void that many LGBTQ+ students may experience in their schools, where representation is still hard to find (read more about the books selected here). In addition, the rainbow libraries stand to educate their teachers, administrators, and peers at the same time.

It’s an experience that she’s lived firsthand. Growing up in rural New York, Holbrooks was the first student ever to come out at her high school, a small public school in the town of Sauquoit. When she did, teachers and administrators didn’t offer any kind of support. There was nothing to read in the school’s library that reflected her experience. She turned to YouTube for LGBTQ+ content, but the options were slim.

“Here are these books that students can read and take home and know that they’re not alone,” she said, surrounded by over 100 newly-packed boxes. “I’m really proud. It feels like a big deal.” 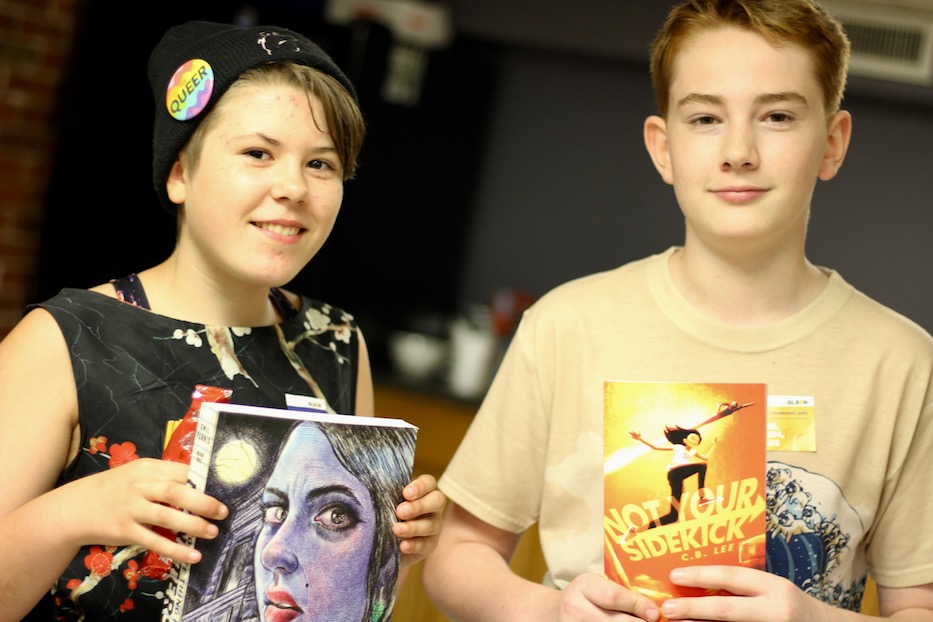 Her words resonated for for students Finn Crumlish and Alex Hoffman, volunteers who are both rising eighth graders at Edgewood School in the city’s Westville neighborhood. In the past year, the two have been advocating for a Gender and Sexuality Alliance at their school, which they are hoping to implement under a new principal this year. After hearing about Rainbow Libraries through their moms, they sprang into action to help pack on Sunday.

During their time at Edgewood, they’ve both heard classmates use anti-LGBTQIA slurs including "the f word" and "the d word," which sometimes turn into bullying when a teacher gets involved. Both said they feel like they've been shut out from most student cliques, because they are outspoken about LGBTQ+ rights and don't hesitate to let teachers know if one of their peers has hurled an insult at another.

But both have also found solace in literature—they praised Edgewood School librarian Kim Rogers—devouring books including Simon vs. the Homo Sapiens Agenda, Leah And The Offbeat, Carry On (“like Harry Potter, but gay,” Hoffman explained) and Gay Vampires among others.

“I feel like the main reason people use these words is because they don’t understand them,” said Crumlish, who had scored a copy of the LGBTQ superhero drama Not Your Sidekick through his volunteer efforts. “I feel like during this current presidency, it’s so important to fight back and speak out. And it’s important that what you’re doing and saying matters.”

While Edgewood isn’t on the current list of Rainbow Library recipients (the closest option is Elm City Montessori School), Hoffman said they hope to see it added later this year, as statewide participation in the program grows. In the meantime, they will be diving into Emil Ferris’ My Favorite Thing Is Monsters and doubling down on that run for student senate. With school beginning at the end of the month, they said that they feel ready to go back.

“I also really like gay literature,” said Hoffman. “But also, I really like being part of a community.” 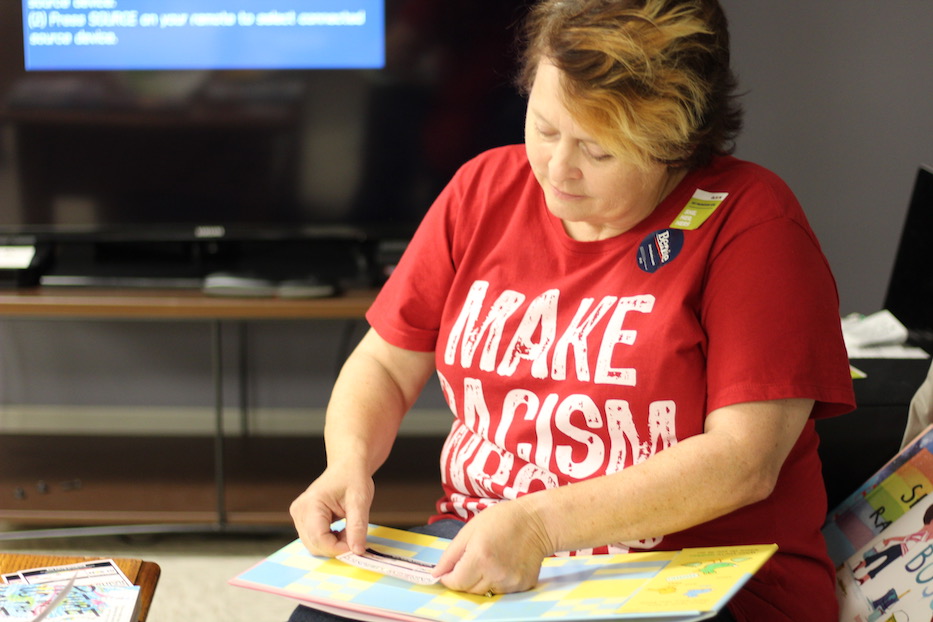 As the two looked over their new books, other volunteers continued to pack boxes, preparing to ship them out (“people are hyped!” laughed Jenn Butler). While this marks the first big push for rainbow libraries in the state, Holbrooks said she would like to expand the program in the next year, with a goal of increasing the project’s reach by at least 10 percent by next September. Rady added that he would like to see the project spread to other statewide and regional chapters of GLSEN, of which there are 45 nationally.

Currently, the project is supported by a mix of grants, corporate donations and institutional partnerships, which volunteers are still seeking as they grow the program. Each Rainbow Library set includes 10 books, which runs about $130. Patrick Dunn, executive director of the New Haven Pride Center, said he has been excited to be one of those partners since hearing about the idea at a meeting of the LGBTQ+ Youth Task Force.

“Books are so vital,” he said Monday afternoon at the center, after making sure every single box was packed and ready to go. “I never remember seeing an LGBTQ+ reference in a book when I was in school. But everybody, and especially every student, should have the right to see themselves represented in books and in the environment around them.”

He recalled discovering the show Dawson’s Creek when he was still in high school, and watching the entire series because it was the only exposure to a gay character he could find. When his mom asked what had sparked the interest, he told her that he had a crush on Katie Holmes. Now, he wants to make sure students have options when they want to see themselves reflected—without having to make something up.

“I think it’s a brilliant, brilliant idea,” he said. “It can literally save a kid’s life.”

Click below for an interactive map of Rainbow Libraries in the state.