A Summer Camp Where Stonewall Echoes 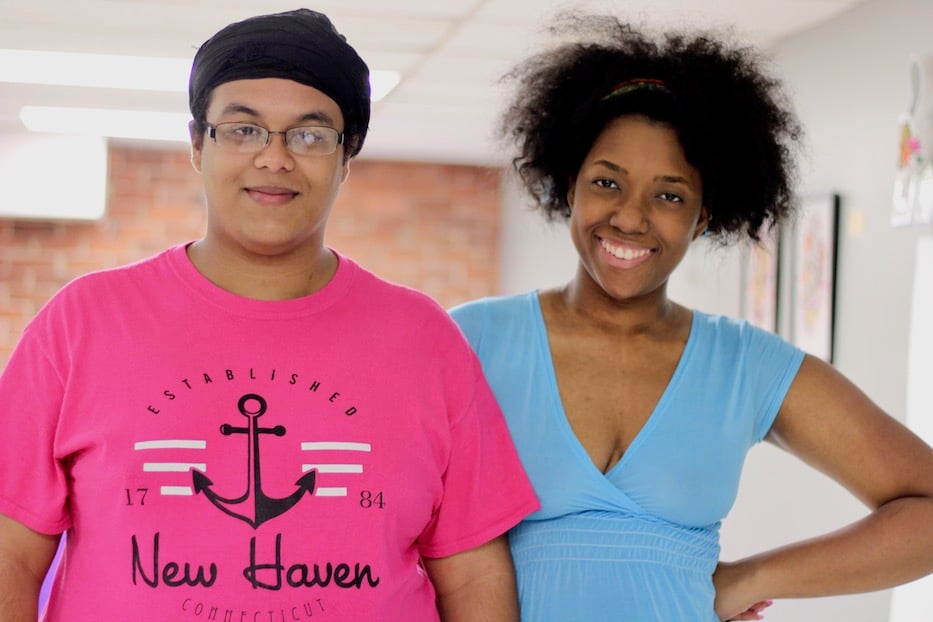 Mia Joseph was digging into queer history, past and present. In one hand, she held the glittering weight of her forebears, Marsha P. Johnson and Bayard Rustin meeting somewhere in her mind. In the other, she grasped a righteous rage: the Black trans women who have been murdered since the beginning of Pride Month, while largely white gay pride celebrations unfold as if nothing has happened.

“This is not working anymore,” she said, her voice rising even as something caught in her throat. “It never worked. And it’s extra not working now.”

Joseph is one of a dozen students at the second annual Black And Brown Queer Camp, unfolding this week between the New Haven Pride Center and Citywide Youth Coalition (CWYC) offices downtown. This year, the camp has shifted its focus to greater activism and organizing, with the approach that youth, and specifically queer youth of color, can lead significant social change.

The program is supported by CWYC and Planned Parenthood of Southern New England (PPSNE), for which facilitator Juancarlos Soto works as a community organizer. After an application process earlier this year, it accepted around a dozen students, all of whom are attending for free. Several are also student leaders in PPSNE’s Students Teaching About Responsible Sexuality (STARS) program.

In part, facilitator Jeremy Cajigas said, the pivot to organizing comes from a goal to make the program more sustainable, so that facilitators can step away and let alumni lead next year, and more alumni the following year, and so forth.

“Last year we focused a lot more on speaking about the issues that we face as LGBTQ people of color,” Cajigas said in an interview at the Pride Center Thursday afternoon. “This year, our focus has been more on how we are developing our young people to go out and actually fight against the systems at play.”

“We can talk and talk about the issues, but if we are not working to fight these issues, we’re getting nowhere,” they continued. “If we’re going to do this, we’re going to build leadership in our young people, so that when this camp is over, they’re going to go out into their community and systemically change a lot of the things that are oppressing them.”

This month, that shift is reflected in the camp’s curriculum, which now includes a two-day undoing racism training from the People’s Institute for Survival and Beyond and organizing how-to sessions and discussions from CT-CORE. In addition to talking through—and organizing around—how white supremacy shows up in their own lives, campers do exercises in freedom dreaming, or the practice of imagining a world in which they want to live, and a world in which they would feel both safer and more liberated. 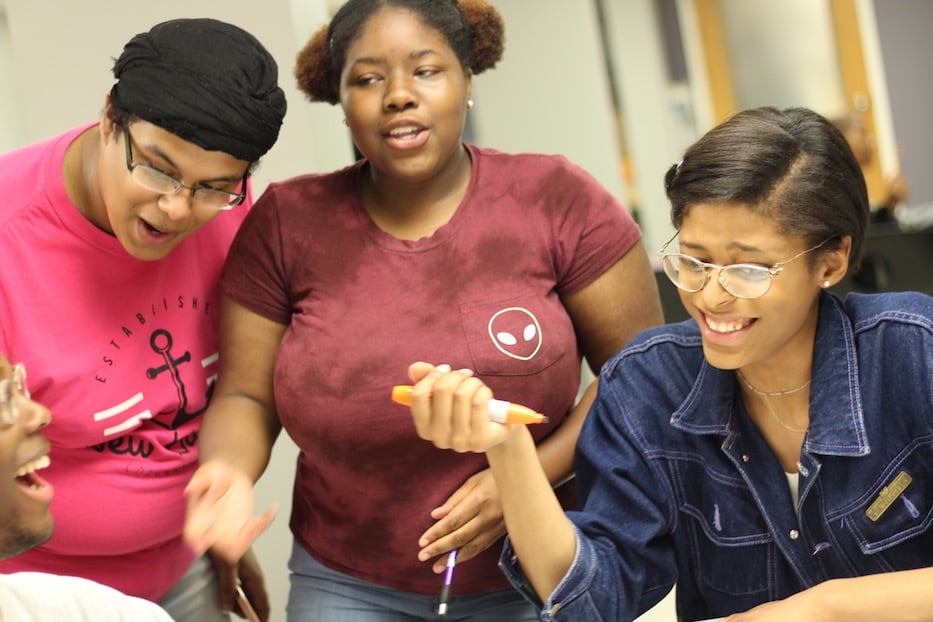 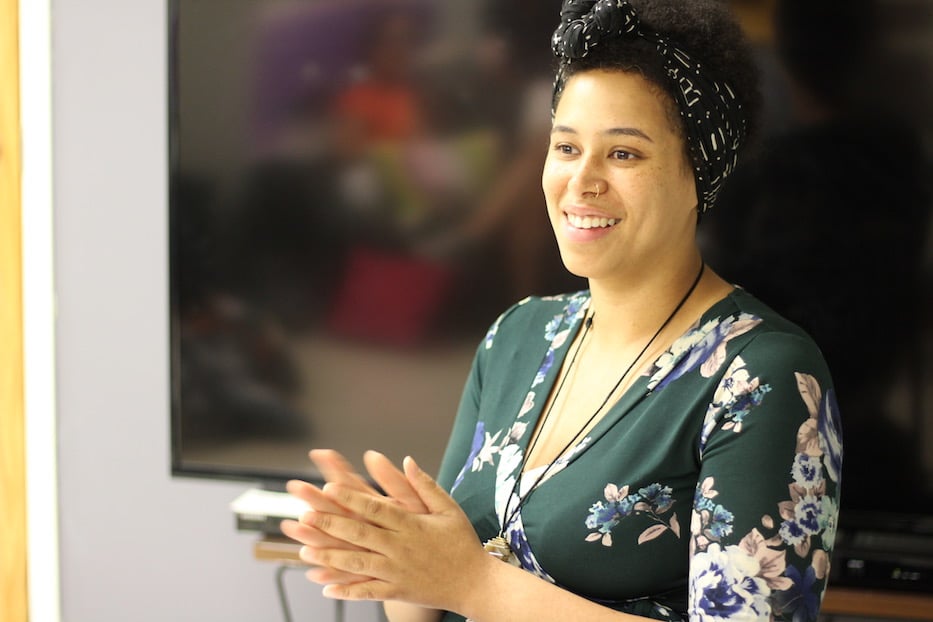 Thursday afternoon, several of them scattered around the Pride Center’s basement digs, envisioning that world with markers, pieces of blank paper, and conversations that bubbled up spontaneously. At a table on the far side of the room, artist Alex Mickens sketched out a perfect sphere, covering it with blue and green marker, grassy planets, and pulsing red heart shapes.

“This is kind of what I think about what I want the world to look like,” she said. “It’s bigger, and there’s just room for everybody.”

There are moments that are quintessentially summer camp, with an activist twist that is as funny and candid as it is galvanizing. At one point, Mickens took a break to weigh in on whether Cardi B was in the right or “problematic” for drugging and robbing men during her time as a sex worker. As she finished her piece, she listened to a debate on whether the movie Titanic gave Jack Dawson (Leonardo DiCaprio) the short shrift by not letting him onto a makeshift raft with his beloved Rose (Kate Winslet), who ultimately made it out from the wreck alive.

“There definitely was enough room,” chimed in Narlin Chimbo, who tried out the camp last year and was excited to return. “But white women love to take up space!”

Those side conversations often flow right into the core of the camp, which has balanced undoing racism work with remembering the Black and Brown activists who have laid the groundwork for that to happen. This year, that has included a particular emphasis on the Stonewall Riots as they celebrate their 50th anniversary, but also the radical foundation that allowed them to take place.

For much of the year, participant Cyril King said that he spends time being treated “as a different person” by family and peers because he identifies as queer. In his school, he knows what teachers oppose the school’s Gay-Straight Alliance, and what peers have been known to post über-conservative information on social media.

At the camp, he is finding a way to talk about it, and to mobilize. 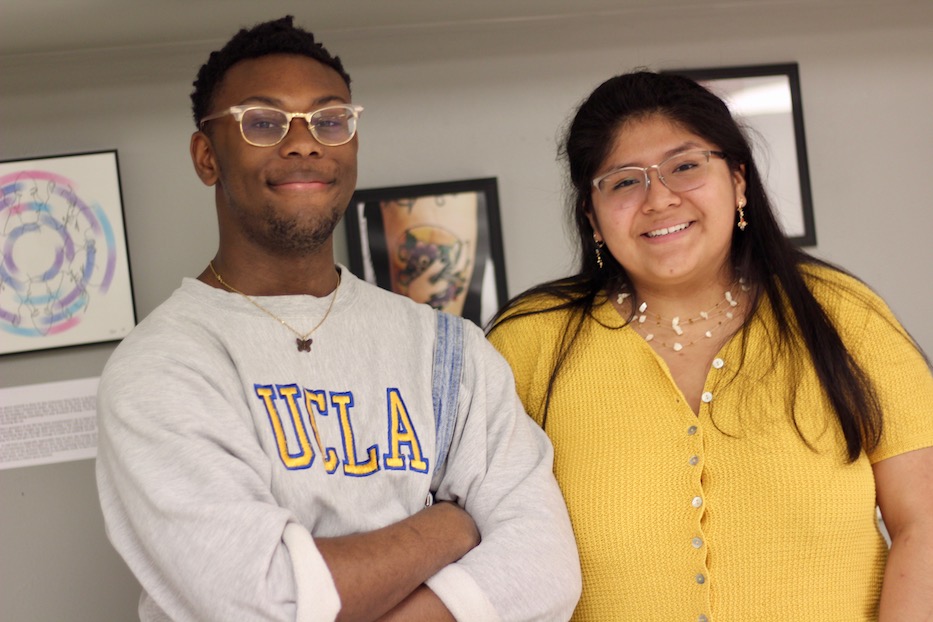 “I think that it’s very uplifting,” said King, who did not wish to disclose his school. “To see a lot of Black and Brown queer youth together in a sense of community, a sense of family. Because a lot of us, we don’t really have a place to call home. I think here, everyone sees me as a human being, and I feel appreciated and I feel loved.”

“It’s the highlight of my summer,” added Chimbo, a rising junior at John F. Kennedy High School in Waterbury. “I really love this energy in the room. Everyone’s really like—we have the same ideologies and we mostly agree on the same things, especially when it comes to politics. So it’s really easy to get along with everyone.”

Soto, who is leading the camp with Cajigas and Black Lives Matter New Haven Co-Founder Ala Ochumare, has also included a strong “artivism” component, with the final two days dedicated to painting and visual art, poetry and creative writing, and movement. For him, those arts are intimately intertwined with the organizing that participants prepare to do during the eight days that they are all together.

“It’s a lot of trial and error, and dreaming about what we want the world to look like,” he said. Of the movement aspect especially, he added that “one of the tools of white supremacy is really to separate us from our bodies.”

Like last year, he has also built in time for lessons in queer history, including Stonewall icons Marsha P. Johnson and Sylvia Rivera, house mother extraordinaire José Julio Sarria, civil rights champion Bayard Rustin, U.S. Rep. Barbara Jordan, sculptor Richmond Barthé, dancer Alvin Ailey and tens of others. Just as teacher and historian Ty Cooper did last June, Soto said he has tried to focus in on seminal and revolutionary figures who have been overlooked or erased at the hands of revisionist historians. 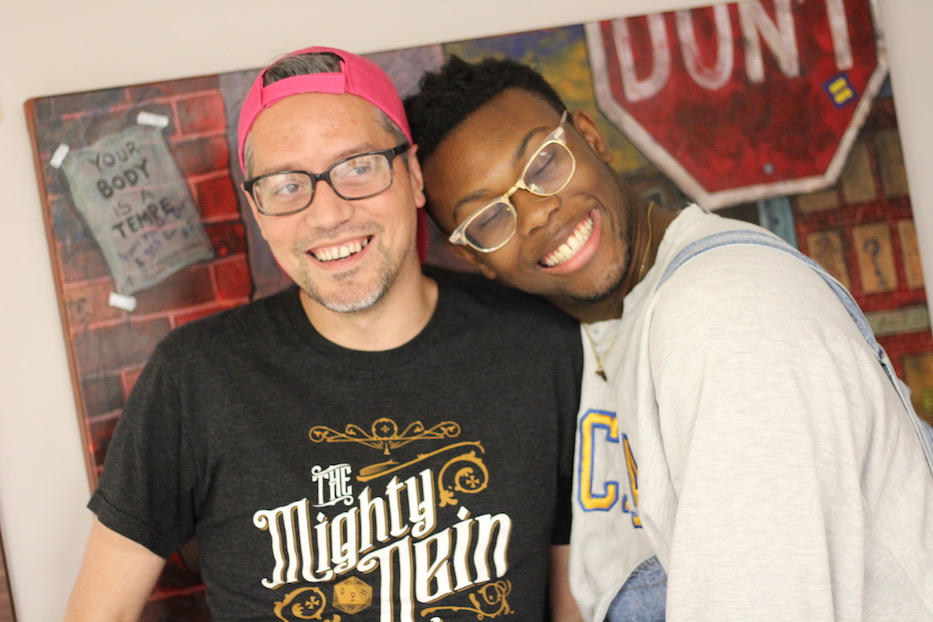 Thursday afternoon, campers scattered into small discussion groups, still wired from one such history lesson that morning. In one corner, King parsed out the difference between a house and a home, leaning on the histories of the Stonewall activists who have been largely erased from the record. Beside him, Chimbo reminded King that campers are members of “Gen Z,” which means they’re now old enough to have another teachable generation of youth under them.

When participants reconvened, Joseph began to speak, words spilling from her mouth almost faster than she could account for them. For her, she explained, a question from CT-CORE asking, “Who are your people?” had unleashed a flood of feelings within her, from needing to mobilize to feeling protective of fellow activists to wanting space to mourn the Black trans women who have been killed this year.

That well-worn anger and exhaustion—and the space to feel them fully—is an intended part of the program, said Cajigas. One of this year’s frequent topics has been the longtime coopting of Pride Month by both major corporations and white, cisgender gay people who are claiming the history of Stonewall as their own. During undoing racism training earlier this week, organizers coordinated with the People’s Institute to have entirely queer facilitators of color. The program has expanded, including a large influx of students from Waterbury.

Now, Joseph said, she plans to take her training to continue to organize—and to hold people accountable.