Pride Center Checks Its +Obias At The Door 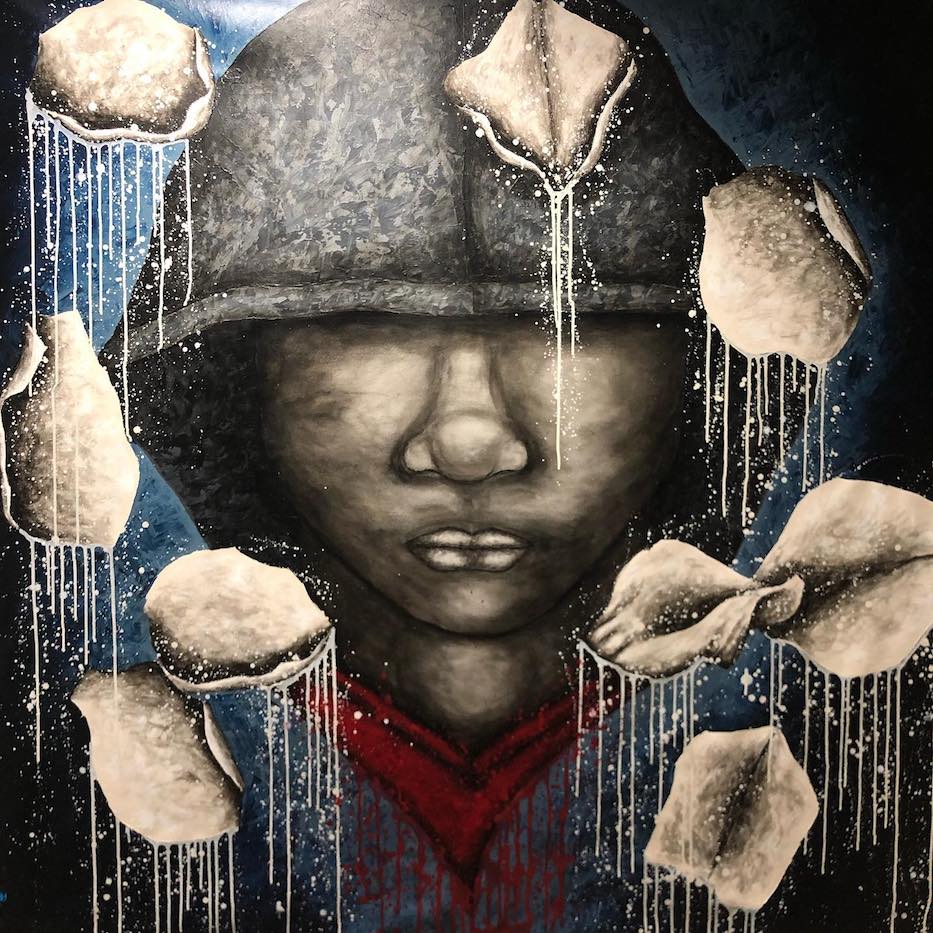 Maybe it's the suggestion of his eyes, just a shadow beneath the hood, that gets you. There’s a slender face, lips pursed. A hoodie covers his forehead and cheeks, red dripping and splattered in a V at the throat. It hits you all at once, a swift punch to the gut: this is the boy with an iced tea and skittles, whose life was snatched from him in an instant. He's just a kid, and he's gone.

Thick white shapes tumble in front of it all, dripping from their shaded edges. Are they petals? Stones, split at the middle? Bits of meteor, giving off stardust as they fall?

The idea behind +obias and +isms came together last year, as representatives of Nasty Women Connecticut, Black Lives Matter New Haven and the Pride Center discussed the points of intersection—and fracture or distance—among their respective groups. This year, they met again several times, building a group show that was big enough to hold all of their identities. They held an open call that ultimately attracted 12 artists.

“For me personally, it’s really a snapshot of the best parts of my intersections,” said Black Lives Matter New Haven Co-Founder Ala Ochumare. “My queer self, my Black self, my nasty woman self. These are parts of me that, in other situations, would be marginalized. Here, they’re celebrated. That’s what art does.”

It’s not the first time the groups have worked with each other. Earlier this year, Black Lives Matter New Haven was a collaborator on Nasty Women Connecticut’s most recent exhibition at the Yale Divinity School and #MeToo testimonials project. Ochumare came on as the Pride Center’s first LGBTQ+ Youth Program Officer this spring, and was a co-facilitator of Black & Brown Queer Camp at the Pride Center and Citywide Youth Coalition in June. 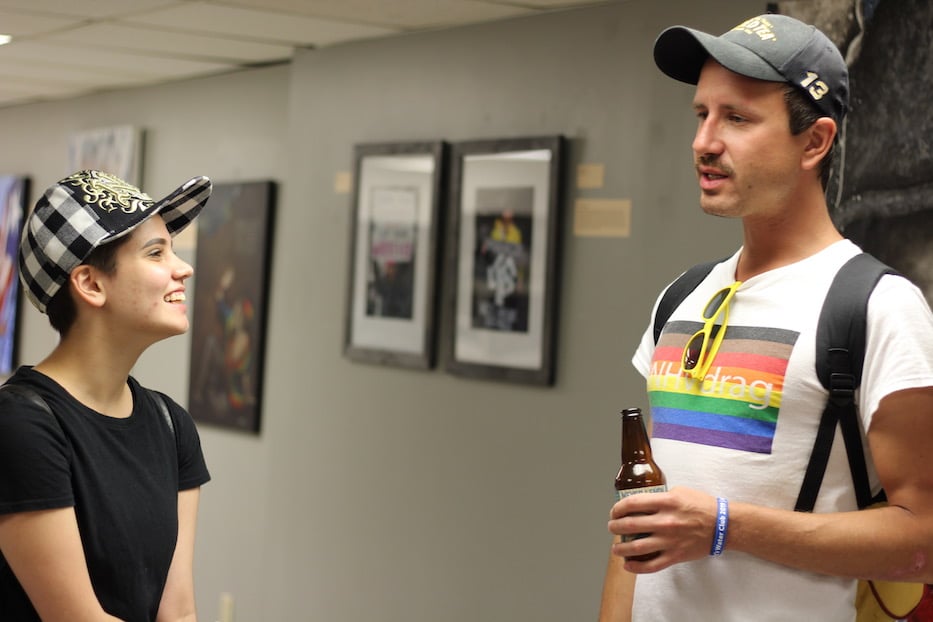 Now they have come together again, asking viewers to check their preconceptions at the door, get a little (or a lot) uncomfortable, and figure out the intersections of power, privilege, and marginalization at which they stand. Or, perhaps, the obias and isms that they themselves withstand—or inflict—on a daily basis.

It’s a revelatory look that takes both jubilant and heart-rending form. To the left of the entrance, Jaii Marc Renee's Our Fallen Future stares out at the viewer, the soft, hooded shape of Trayvon Martin catching its passers-by off guard. Something is different here, the viewer realizes—there is the hooded face that became synonymous with Martin following his murder, but the eyes are covered, denying his viewers that last look at his beautiful, young face. A thick, folded V of ruby red sits at his throat, nearly glowing.

It’s as if he could be the artist, or the viewer, or the viewer’s child, or brother, or cousin. As if we already know him intimately, because we probably do. It’s a piece that warrants long, careful study for the details that emerge one by one, through a curtain on falling petal-like shapes that drip white. One may find parts of themselves at war: the painting memorializes and act of senseless, bigoted violence with immaculate aesthetic form. 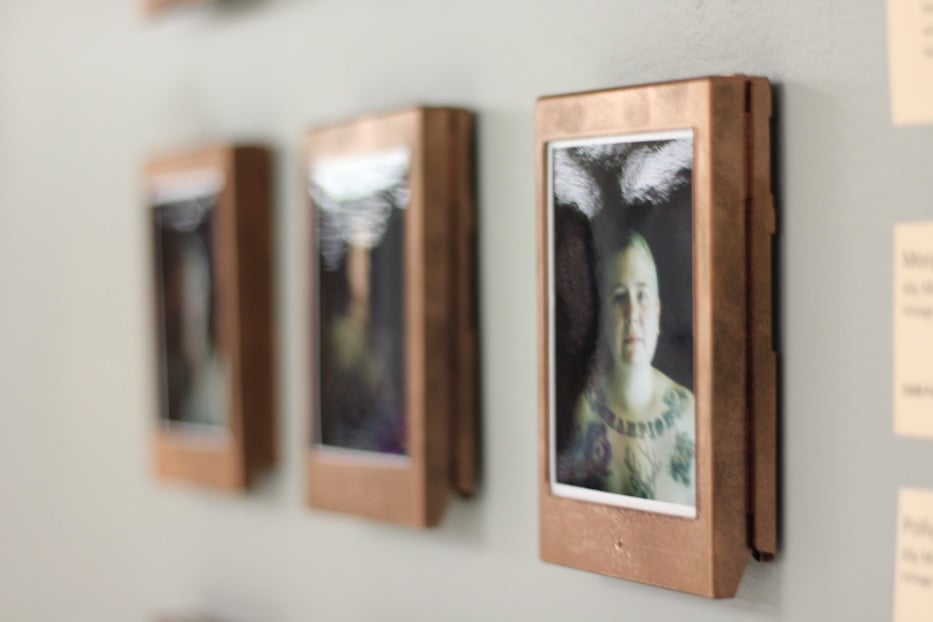 Across the gallery, three neat rows of three images each by Aly Maderson Quinlog take an entirely different approach, inviting viewers to get intimately close so they can study the contours of people pictured, and stare right into their eyes. They are all part of the artist's ongoing WE ARE HERE: a portrait project, a series of polaroids of people who identify as queer.

The polaroids are arresting: nine faces emerge from a completely black background, flickering just slightly on the light. The focus is soft, but always deliberately so, as if it requires a second, and a third, and a tenth look to get the full picture. Some of the figures almost break a grin; others seem wary of the camera, the light falling onto their cheeks and collar bones. One figure holds their full breasts, as if to shield them from the lens.

“I ask my subjects to look directly at the camera so that the viewer must look these beautiful people in the eye,” the artist writes. “Too often queer folks are ‘accepted’ only if we stay in the shadows and shame. That time has passed. We are here. We are queer.” 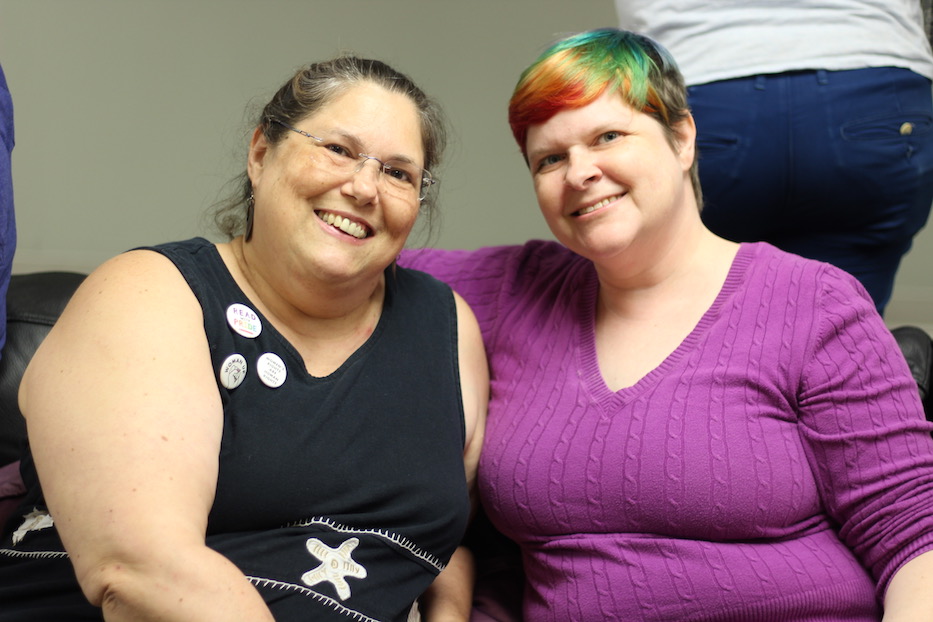 In a nod to photographer Robert Mapplethorpe, who used polaroids for his own self-portraits and whose own queerness was often erased in exhibitions during his lifetime, Maderson Quinlog has mounted the portraits in used film cases.

On the same wall, other artists take on their own approaches to intersectionality. In Don’t Shut Us Out, L. Meredith Phillips has blended quotations from feminist and female-identifying artists with their portraits, as if to remind the viewer that their messages cannot be forgotten by history (her wife, the photographer Arienne Davey, is also featured in the exhibition).

In the nearby mixed media piece Perceptionism, artist and architect Ileana Dumitriu has painted a gilded face on a split background, light and shadow separated by a vertical rainbow. The figure is not androgynous so much as totally fluid: Dried leaves dot their shoulders, chin, hair and ears.

“It can be half woman and half man, or maybe the other way around,” Dumitriu said. “Or the whole spectrum. It’s just how you perceive things.” 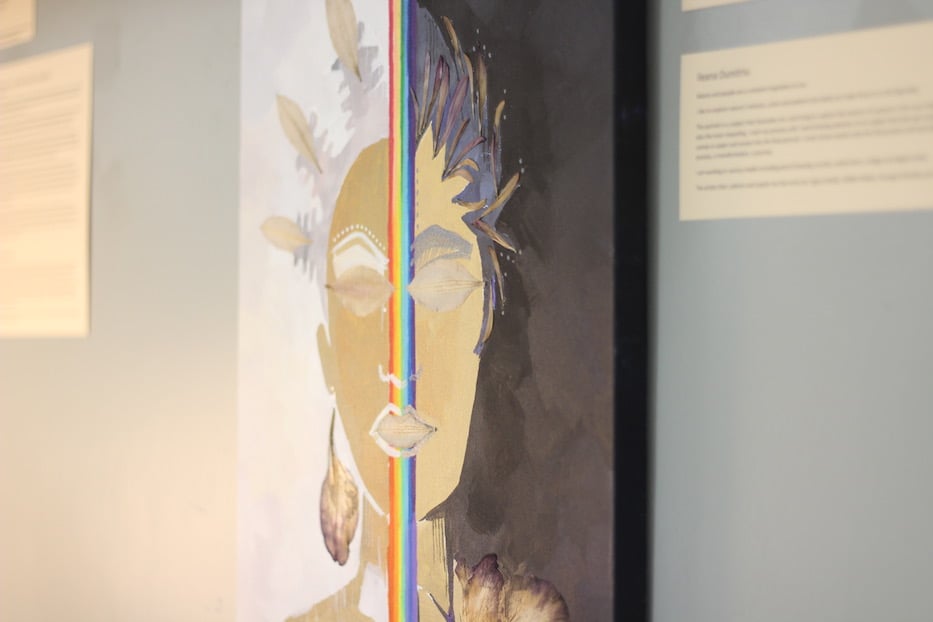 There are also familiar names in the exhibition, with work from Ricky Mestre and Tony Ferraiolo that are enough to make the viewer question everything they know, just in time for Connecticut Pride Month later this year. Elsewhere, artivist Juancarlos Soto’s fierce responses to immigration policy, the #MeToo movement and his own heritage wink out, so fiery they are nearly radiating heat.

“Someone was like, ‘I felt like she was staring daggers at me,’” he said of his piece #MeToo at the opening reception Monday. “And I was like, yes! That’s the point. She did her job!”

And indeed, the works are meant to do their dagger-staring, thought-provoking work on the viewer, said photographer and Nasty Women Connecticut Co-Founder Lucy McClure, who is one of the collaborators and also has two long exposure photographs in the show. When the three groups first met, she said, they had several difficult conversations—including how feminism had largely failed both the LGBTQIA community and people of color for decades. 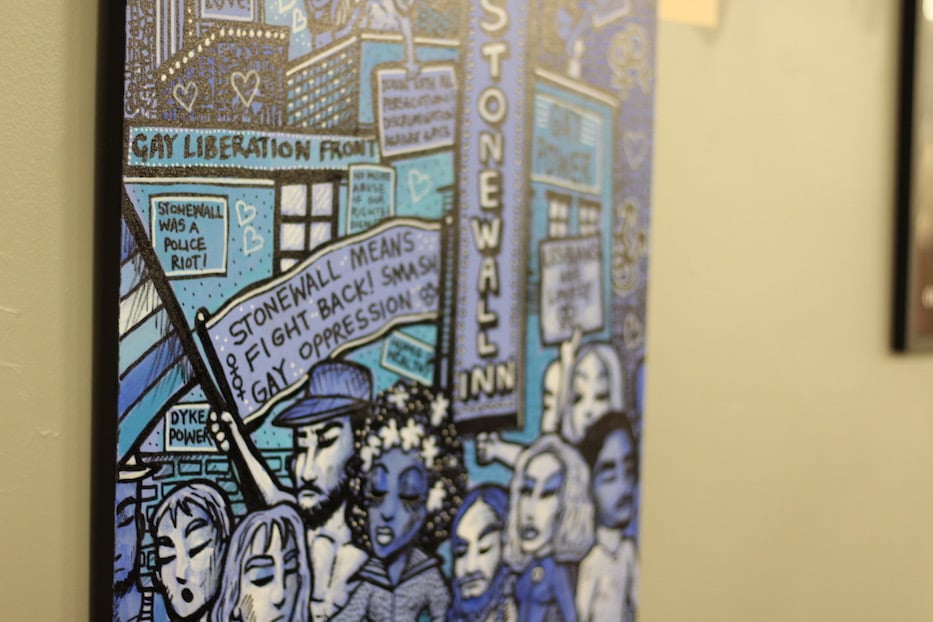 “I feel very lucky for this collaboration,” she said. “It has been moving. It has been educational. To partner with these grassroots groups, you have to jump through groups. You have to prove yourself … that you’re not just there for the token member, but that you’re in this. That you will stand by them.”

“It isn’t always easy,” she added. “But we are all fighting for a better community.”