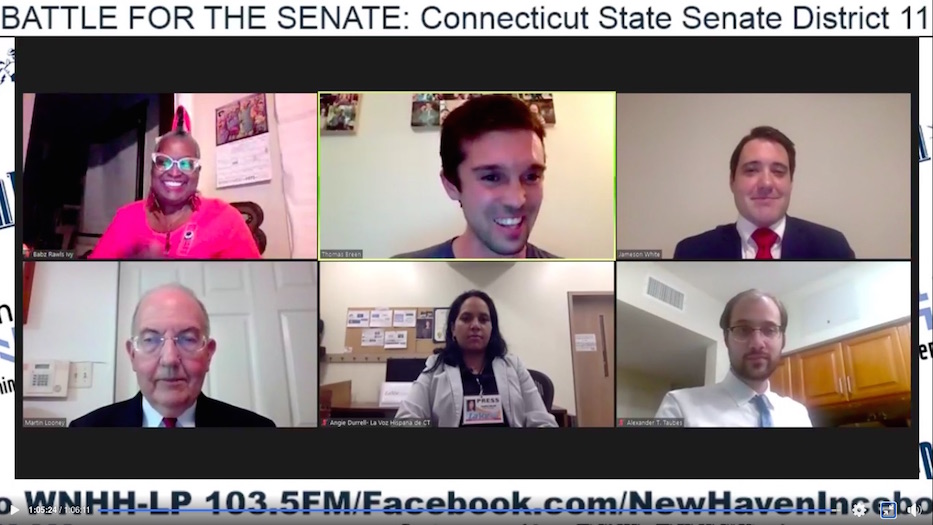 One writes poetry, but doesn’t think arts funding has any place in the state budget. One thinks Gov. Ned Lamont is shortchanging arts orgs on COVID-19 relief, and would increase funding ten fold. One would expand the arts budget, and is already working to sway the governor to do so.

Those answers came from Jameson White, Alex Taubes and State Sen. Martin Looney Wednesday night, as they faced off in one of the last debates before election day. All three are running for the 11th State Senate district, which covers sections of New Haven, Hamden and North Haven.

Looney currently holds the seat; he was first elected to the State Senate in 1993 (before that, he served six terms in the State House) and has run largely unopposed since that year. He has been President Pro Tempore of the State Senate since 2015. Taubes is a local civil rights attorney who petitioned to get on the ballot as an Independent earlier this year. White is a salesperson for Florida All Battery Systems, a Jacksonville-based limited liabilities corporation.

In an hour-long sparring match that covered transportation, education, taxes, police accountability and the COVID-19 pandemic, all three also made time to discuss how they would advocate for arts funding in Connecticut. The question, which came from Rawls-Ivy, arrived on the heels of Gov. Ned Lamont’s announcement earlier this week that the state will be distributing $9 million in federal CARES Act relief funding to arts organizations across the state.

“When the pandemic hit, the arts community was the first community that took the biggest hit,” she began. “We saw theaters and places shut down all over the country, particularly here in the Northeast. We all got an education on what it means to have a gigging community and what that looked like.”

“I think we all were sort of surprised at how much we need the arts in our everyday practical lives. And not only artists, but arts provide jobs. So talk to me, each one of you, about where you see the support of continued engagement of the arts community, so that we can ensure that we have a viable arts community once we come through this pandemic.”

Prior to COVID-19, the state’s arts and culture sector generated $9 billion, 57,000 jobs, and five percent of Connecticut’s economy. Currently, state arts funding is distributed in two main ways: line item appropriations from the Department of Economic and Community Development (DECD), and a series of grant programs from the Connecticut Office of the Arts.

The bulk of line item funding goes toward institutions that can make an argument for the direct economic impact of their work. Since the beginning of the pandemic, multiple organizations have started their own artist relief funds to compensate for the lack of both state and federal aid.

As of Oct. 19, Americans for the Arts reported that arts and cultural organizations nationwide are estimating $14 billion in financial losses, with an additional $15.1 billion gone in audience spending at local businesses, restaurants, bars, and retail locations. That translates to almost 900,000 jobs that have disappeared. The number may be much higher: the findings are based on 19,800 respondents to a survey.

White spoke first. He told Rawls-Ivy that he loves the arts deeply: he writes poetry in his free time. But he doesn’t believe that arts should receive any state funding. He held tight to that view Wednesday, in spite of the massive return on investment that the state receives from the sector each year.

Taubes came in on the defensive, noting that the arts are not only an economic boon to the state, but a key component of social and emotional wellbeing for young people and adults alike. He suggested that if he were in the state legislature, he would have pushed for $90 million in CARES Act relief funding, instead of one tenth of that amount. The $9 million comes out of a total $1.3 billion that the state received from the federal government earlier this year.

He advocated for more substantial funding to individual working artists, in a model that would move Connecticut closer to a state like California. Last week, San Francisco’s Economic Recovery Task Force announced a pilot program through which it will distribute $1,000 per month to 130 working artists for the first six months of 2021.

“I think we need to have a sustained commitment of funding, a pipeline of funding, to ensure that artists are able to live, basically, and eat, given the circumstances that we have,” he said. “We need to make arts more available to everyone through remote means that we have now through the pandemic. ”

He pointed to the importance of arts education, which can improve students’ overall academic performance and increase their cultural competency and capacity for empathy and understanding. Without state funding, he said, some of that will inevitably disappear.

“It’s a public good that won’t exist if we don’t fund it and support it,” he said. “To the extent that people say that we’re out of money, look no further than the two Yale art museums [the Yale University Art Gallery and Yale Center for British Art] that we annually give multi, multi, multi million dollar tax breaks to as nonprofit institutions. If we can afford to give the most wealthy art museums in the world millions of dollars in tax breaks, we can certainly afford to keep our local artists and their communities alive and thriving.”

Looney noted that he doesn’t need to think about how he would fund the arts: he’s already doing it. Since this summer, he has recommended that Lamont allocate CARES Act funding for arts and cultural institutions that are sorely in need. If reelected, he pledged that “we certainly intend to build on that during the next regular session.”

“The arts are absolutely critical in a culture as a way of building community, as a way of building connections, and a way of expressing the essence of the human spirit,” he said. “Even if the arts had no financial benefit at all, and they certainly do … even if that were not true, the value of art in and of itself as a humanizing element in the community, it stands on its own merits.”

He may defend the police and decry raising the minimum wage—both in line with White’s anti-immigrant platform—but even he believes in state funding of the arts.

Looney added that the issue is one particularly close to his heart: he sees New Haven as the cultural capital of the state. That’s a title it has kept even in the midst of a pandemic. He shouted out the city’s theaters, galleries, museums, and educational incubators such as Neighborhood Music School and the Educational Center for the Arts

The election is Nov. 3! Find out more about who and what is on the ballot here.