"The Chinese Lady" Brings Long Wharf Back To Life 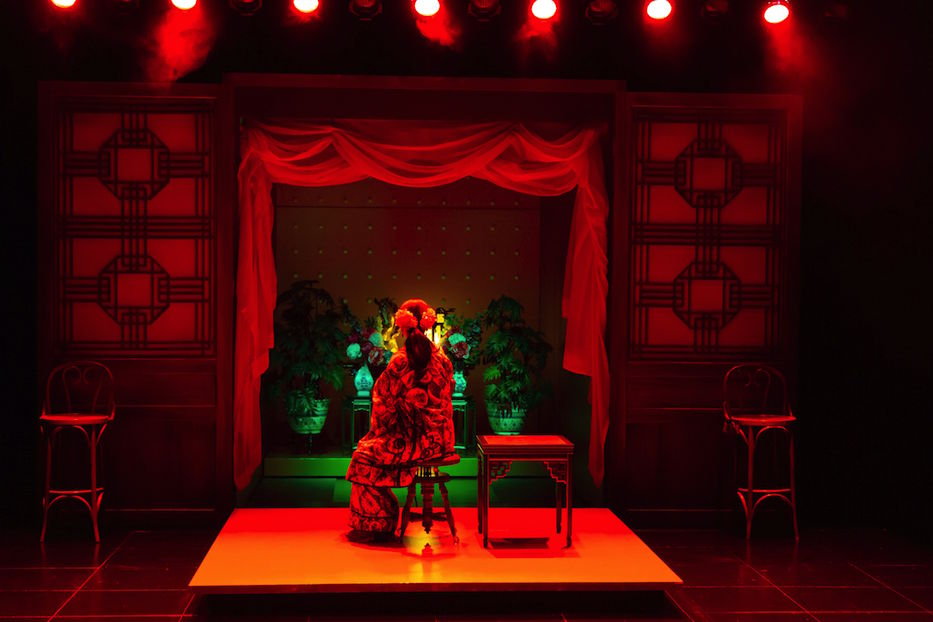 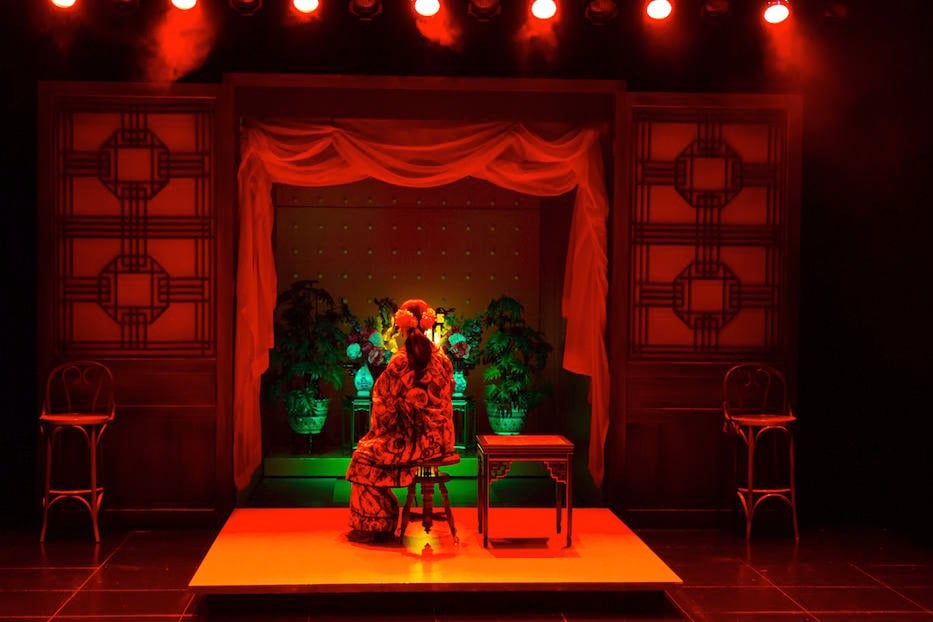 Afong Moy’s small, sharp-edged world is shifting on its axis. Sitting inside a room—which is in fact a room within a room—she recounts her first trip to a zoo in America. She admired the animals, she tells the audience. Their sweet eyes. Their soft coats. She pauses for a fraction of a beat. When she turns, her face is etched with a new kind of understanding.

“If I am in a cage, what sort of animal am I?” she asks. Before the audience can answer, she’s listing caged creatures, in a waterfall of words that hits right at chest level.

That gradual, painful kind of realization defines The Chinese Lady, running at Long Wharf Theatre through Oct. 31. Written by Lloyd Suh and directed by Ralph B. Peña, the work juggles candid storytelling, nineteenth-century Chinese and American history, and questions around agency, bodily autonomy, and consent for bodies that are nonwhite and non-male. It is ultimately a crash course in civics and a stunning rebuke of dominant narrative, told with both teeth and biting humor.

The work, a 2020 run of which was cancelled just days before opening last year, marks Long Wharf’s first performance back in its Sargent Drive building since March 2020. Tickets and more information are available here.

The play’s inspiration is the real-life story of Afong Moy (Shannon Tyo), a young woman from Guangzhou, China who in 1834 became the property of traders and cousins Francis and Nathaniel Carnes. At the time, she was only 14 years old, cut off from her parents and six siblings halfway across the world. She originally lived and was exhibited in the home of ship captain Benjamin Obear in New York, and later was taken on tour across the Northeast. 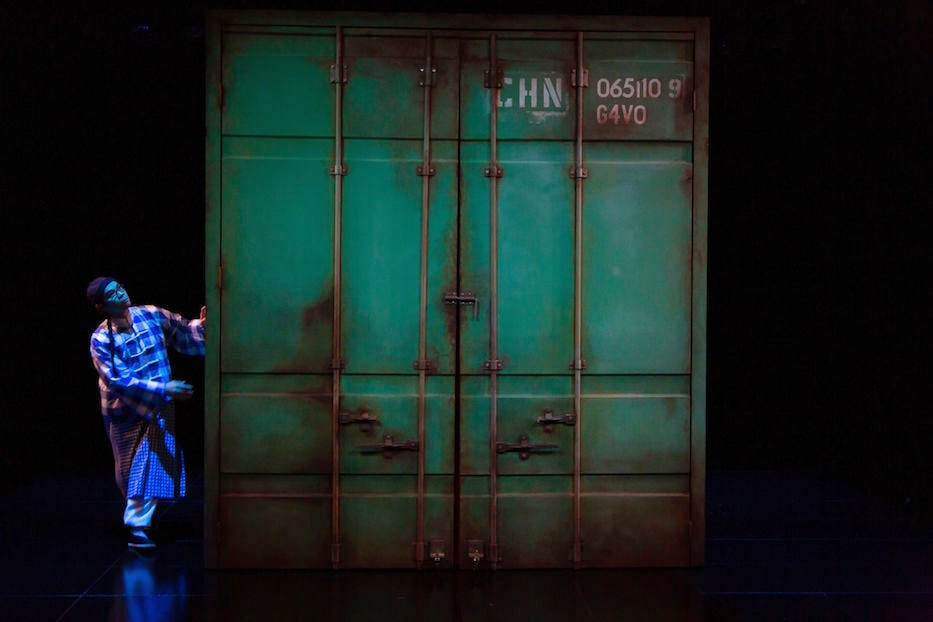 During the day, the Carnes cousins put her on display in a room that placed her body in the crosshairs of spectatorship, profit, fetish and (white, Eurocentric) nineteenth-century exhibition practice. While Suh makes it clear that this is a creative adaptation on Afong Moy’s life, several details—including a meeting with President Andrew Jackson, for whom she performed privately at the White House—are true to the historical record.

That 1834 display is where the work begins, in a shipping container that holds a room “unlike any room in China,” Afong says. For audiences, she pours and drinks tea, displays her use of chopsticks on rice, shrimp, and vegetables, and walks on her bound feet. She is rarely without her translator Atung (Jon Norman Schneider), who balances a keen and barbed understanding of white America with a quiet, protective impulse and creeping sense of exhaustion.

If the show’s exposition is an opening for white consumption of Asian trauma, Suh flips that idea on its head, giving agency, nuance, and rich internal monologue to a woman who was robbed of all of those during her lifetime. From behind thick, doll-like makeup that gradually comes off, Tyo deftly weaves together details from Afong’s own life and dark, often horrific turning points in American history, including the Transatlantic slave trade, Trail of Tears, extractive and often deadly use of Chinese labor on the Transcontinental Railroad and Chinese Exclusion Act of 1882.

The fourth wall is all the way down: she acknowledges and immediately engages with the audience, in a collapsing of time and place that becomes essential to the work. The audience, in turn, must reckon with the fact that they are extensions of those nineteenth-century museum goers, who have paid an increasingly steep price to lay their eyes on this woman’s body. They must look at themselves, in other words, in the process of looking at her.

It’s a heavy, weighted history that Tyo carries nimbly. She often delivers historical tidbits as Afong moves on her small, bound feet and a tunic decorated with blue-and-white dishes, reminding the audience that she is constantly performing (there is a sort of theatrical dab with chopsticks that is particularly memorable). But she is also smart and sharp and cuttingly funny, poking holes in the fabric of white American history through observation alone.

If Americans think foot binding is barbaric, she muses, what of corsets and the Transatlantic slave trade? Or perhaps, what would Chinese people think of a white woman kept in the same kind of touring display, sleeping on an elevated bed and eating potatoes with a fork? Or what does President Jackson think about the use of her display to foster cross-cultural dialogue? 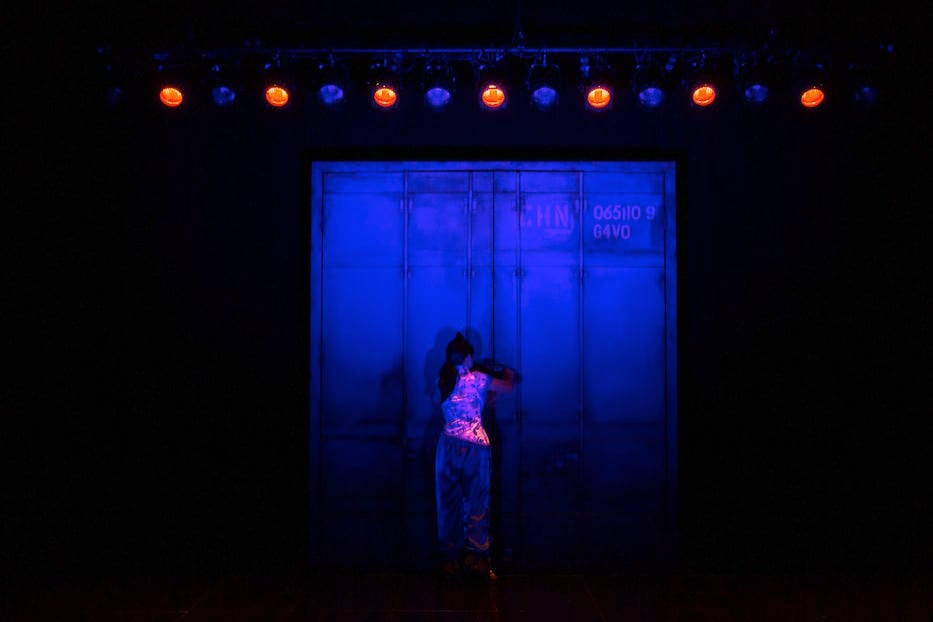 These are questions we know the answer to already, and watching Tyo ask them is squirm-worthy for all the right reasons. The sweet poetry in her performance—her short-lived understanding that “history is an accident”—grows more complex and more fiery the older she gets. It’s a delicate balance that Tyo has mastered: Afong is increasingly more interested in rage than in resignation, but she’s not allowed to express either of those as a nineteenth-century performer who is also held captive.

Instead, she acts out in small ways, her internal monologue seeping into her decorative nineteenth-century performance, until the boundary between them is porous, tectonic. These moments of slippage, when the audience realizes that the Afong they hear is very different from the Afong that America once understood on a very surface level, give the work a deep, sinister kind of underbelly. They point to the sheer absurdity of whiteness and entitlement, from the barbaric use of corsets and forks—"violent and easy,” Afong exclaims while comparing them to chopsticks—to the Snake River Massacre of 30 Chinese miners in the late 1880s.

Tyo has made the role her own, transforming from a bright-eyed 14-year-old to a 29-year-old to a 44-year-old as though she has lived all of those lives herself. As he jumps in as her translator, her foil, and occasionally her protector, Schneider becomes a masterful scene partner, laying bare the lie that is Manifest Destiny. There’s a tension and also a tenderness that builds between the two, whose worlds are most closely linked the longer they are severed from their homes and families.

Costume designer Linda Cho is especially balletic in this transformation, using full-face makeup, fabric flowers, various hats and headpieces, a quilted robe and a shimmering blue-and-white dress to mark the passage of time. Around her, fantastical, sometimes haunting and carnivalesque lighting from Jiyoung Chang keeps pace, with a particular flare for the spectral at the end of the show.

Set designer Junghyun Georgia Lee holds all of it. Midway through the play, Afong herself acknowledges that the room—this collapsible container within a container, which also holds the container of her body—is a third character in the show. By that moment, Lee has made the point with no words at all.

Together, the production works to illuminate the violence against and cultural erasure of Asian voices baked into American history, and into Western imperialism more broadly. It is as much a story for 1834 as it is for 2021, and an 18-month period that has seen a sharp rise in anti-Asian violence across the country. It is equally a story for New Haven, where projects like AAPI New Haven and Yale-China’s Brilliant Boba are now taking root.

As a playwright, Suh does not entirely trust the audience to make that jump, and sometimes makes it for them. That’s felt most keenly in the play’s closing 15 minutes, which sees a sudden and explicit compression of 200 years into the present. It’s jarring, reminding the audience that Afong Moy’s story is not so far away at all.

But when American history is an open wound, what reason does he have to do anything else?

The Chinese Lady runs at Long Wharf Theatre, 222 Sargent Dr., through Oct. 31. On Wednesday Oct. 20, the performance will be followed by a talkback with members of Yale-China, Seeds & Sprouts, Amity student organizers, aapiNHV collective, and Vermillion Theater 朱雀剧社. Shifu Shirley Chock of the Aiping Tai Chi Center will lead the audience in a healing exercise after the show. Tickets and more information are available here.