"This Honor Belongs To All Of Us:" Metro's Nataliya Braginsky Named History Teacher Of The Year 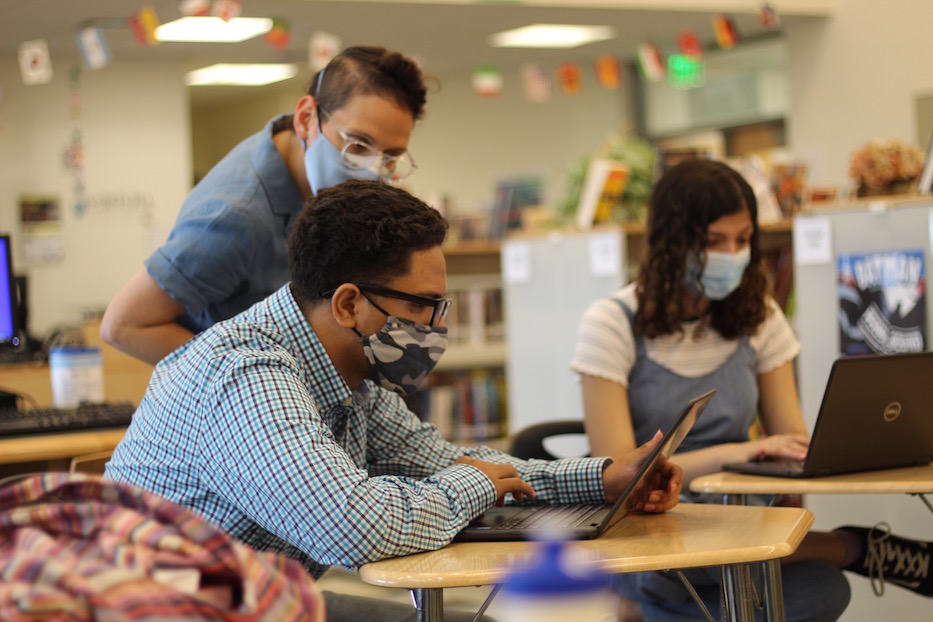 When Nataliya Braginsky walks through Jocelyn Square, she can feel the legacy of Pastor Simeon Jocelyn, who attempted to launch the first Historically Black College (HBCU) in New Haven with Rev. Peter Williams in 1831. If she finds herself on Sylvan Avenue, she knows she's not far from the Black Panthers' 1969 headquarters. Across town on River Street, she can stand in the same place where Frederick Douglass once addressed Connecticut's Black Regiment in 1864.

That knowledge has come from her students, budding historians and archivists who have become her co-teachers at Metropolitan Business Academy. As she steps onto a national stage this fall, she's bringing their work with her—and hoping it can be a template for anti-racist teaching across the country.

Wednesday night, Braginsky formally accepted the award for 2021 History Teacher of the Year from the Gilder Lehrman Institute of American History, which received a record 8,500 nominations for the honor. Braginsky is a history teacher at Metropolitan Business Academy, where she teaches social studies, contemporary law, journalism, and a course in Black and Latinx History. The last has gained statewide and now national attention since its birth in 2019.

A love-fest to history teachers across the country, Wednesday's virtual event also included praise for the 2021 finalists and recognition of Braginsky’s work from historian, filmmaker, literary critic and Harvard Professor Henry Louis Gates Jr. Last weekend, Braginsky received recognition for the award at People Get Ready Books, during the launch of Daniel Martinez HoSang's book A Wider Type of Freedom: How Struggles for Racial Justice Liberate Everyone.

"Without knowing and understanding our history and its profound impact, we are lost," said Braginsky in a short film before the presentation of the award."History is so powerful. We must teach the truth. The full story." 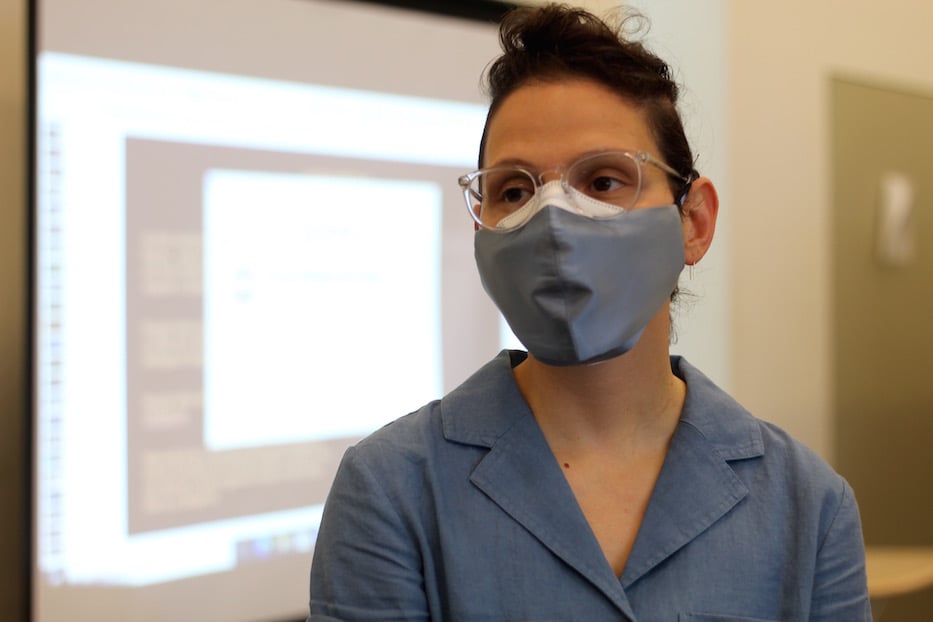 Braginsky at Metro in May 2021. Lucy Gellman File Photo.

Her work in New Haven has been highly collaborative, leaning into a student-led approach that makes her classroom more horizontal than hierarchical. In 2012, Braginsky began teaching workshops in culturally relevant pedagogy, an educational footprint she has grown as a member of the State Education Resource Center (SERC) and the Anti-Racist Teaching and Learning Collective (ARTLC).

Along the way, she has always been quick to point out the activists, student educators, and fellow anti-racist teachers blazing the trail, including members of CityWide Youth Coalition, Students for Educational Justice, and Hearing Youth Voices.

Three years ago this fall, she began teaching a course in Black and Latinx History that starts with pre-colonial history—rather than the enslavement and displacement of Black, Brown and Indigenous people—and time travels up through the present. In particular, her approach includes grafting that history onto New Haven with her students, who are contributors to a growing map of Black, Indigenous and Latinx landmarks in the city.

Since the mapping project began in 2019, they have included everything from the 1638 treaty between the Quinnipiac and English Settler-Colonizers to the 2019 passage of New Haven's Civilian Review Board. Recent additions feature Indigenous leadership in New Haven’s 2012 Occupy movement, the establishment of JUNTA for Progressive Action in Fair Haven, and a week of riots that shook Congress Avenue in 1967, after a white restaurant owner killed a Puerto Rican man outside his business.

Since 2019, students have not only grown that map, but also launched audio tours of Dixwell and the Hill, added historical events as they are happening in real time, and folded highly localized speculative fiction into their work. Their research has run parallel to curricular development at the state level, as Connecticut high schools prepare to offer an elective in Black and Latinx history by fall 2022. That legislation was made possible by years of student-led advocacy, including at the State Capitol in Hartford.

"It is because of these young people that I sit before you today," Braginsky said Wednesday, adding that “These students have been my collaborators and co-teachers for this course."

Many of those students have since graduated, and taken the power of history with them. In a video profile of Braginsky from HISTORY (formerly the History Channel), several of them weighed in on the class' role in shaping who they are and how they envision themselves in New Haven and in the world.

Dameon Dillard, a 2020 Metro grad who moved to New Haven when his family was displaced by Hurricane Katrina, praised her sheer belief in her students. Last year, he was one of a few students to bring the class’ first audio tours to completion. He is a 2020 graduate of the school.

"When she first seen me, she believed in me more than I believed in myself," he said. “You’re actually a good person. You actually have potential. You actually can do something. And she showed me how to do that … it feels great. Historian next to my name? I might put that on my resume.”

"It makes me feel heard, and seen," added Chelsea Singh, a 2021 Metro grad who studied Emma Jones' decades of advocacy for police accountability in New Haven. "She asks us what she wants to learn and plans the entire year around that." 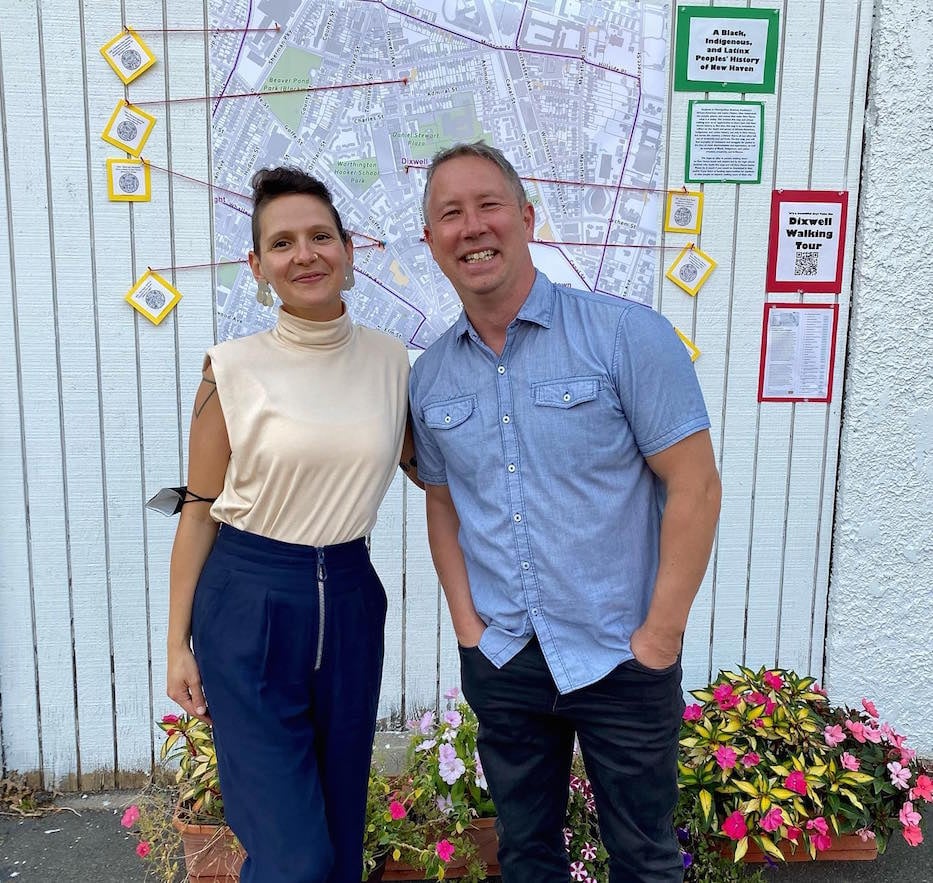 In addition to her work in the classroom, Braginsky also led the creation of Metro's Restorative Justice Working Group, which resulted in the school's first-ever Youth Justice Panel. The working group and panel focus on addressing, discussing and healing harm instead of involving law enforcement or school-sanctioned punishment. It is “one piece of a larger puzzle that works to dismantle the school-to-prison pipeline,” Braginsky writes on her website.

Wednesday night, Braginsky took the brief time she had for remarks to both thank her community—from students and educators to her partner and parents—and advocate for a world in which public schools are robustly funded, from fully-stocked bookshelves to widespread anti-racist teaching and learning. She pointed to America's sheer concentration of wealth, noting that no public school should be struggling to meet the basic needs of its staff, teachers and students. She urged her fellow educators, as well as her students, to advocate for that future together—because "when we fight, we win," she said.

"This honor belongs to all of us," she added. She closed on the words of Arundhati Roy: “Another world is not only possible, she is on her way. On a quiet day, I can hear her breathing.”

Watch the film from History and the The Gilder Lehrman Institute here.