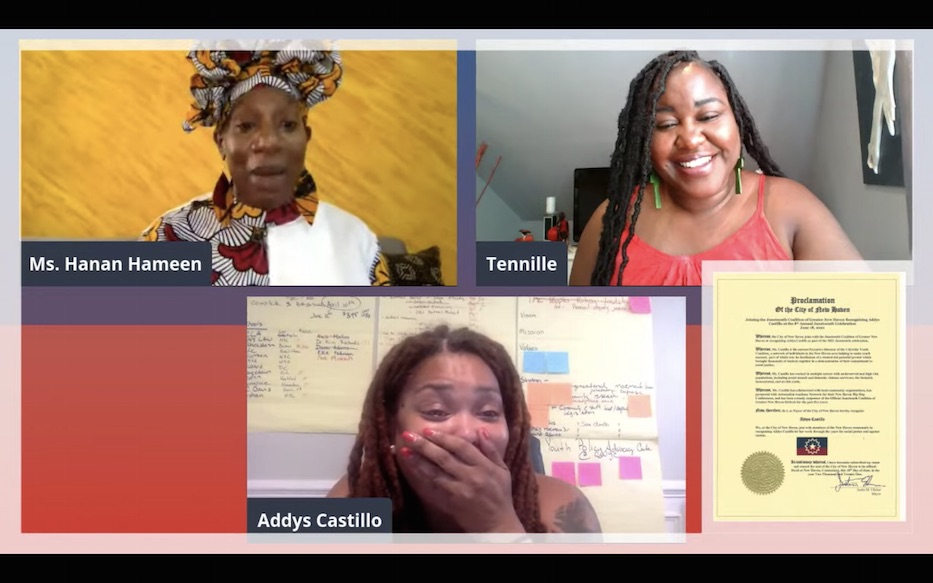 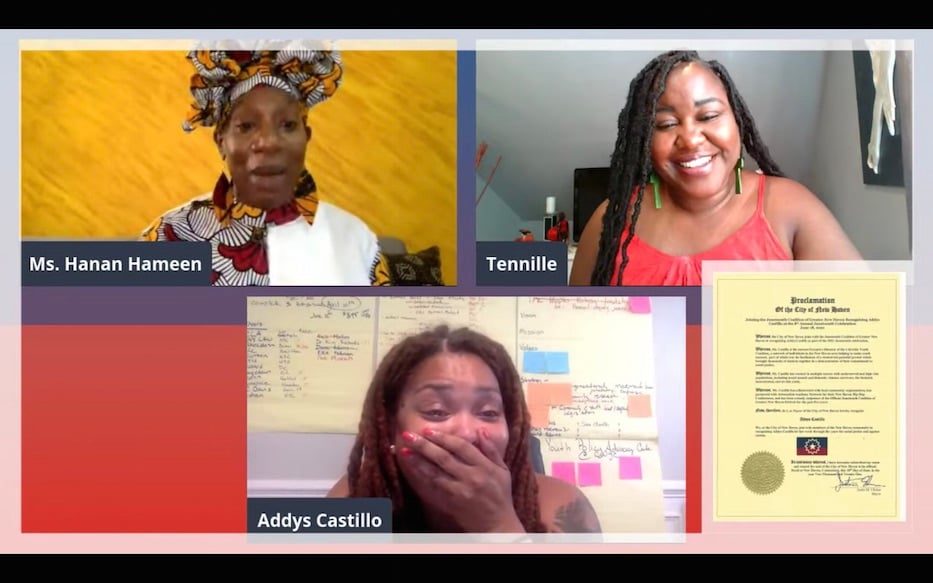 Addys Castillo’s eyes welled. Her hand rushed to cover her dropped jaw, and she laughed. She had not expected the Mantle Award, and she was in shock.

The president of Citywide Youth Coalition, Castillo was one of two Mantle Award winners at the eighth annual Juneteenth Ceremony hosted by the Juneteenth Coalition of Greater New Haven.

For the second year, the committee moved the event to a virtual stage due to Covid-19. The celebration normally takes place on the New Haven Green.  The two-day event featured an opening ceremony on Friday, followed by a day of Zoom classes on Saturday.

“We acknowledge those elders who have done this work decade after decade, for their entire lives,” said Kidz Kook Association Founder Tennille Murphy, who gave out the awards with Artsucation Academy Network Founder Hanan Hameen. “This is who they are. This is how they live.”

“Honoring elders is a way of life,” she added. “We make them seen, and we give them their flowers while they are here.” 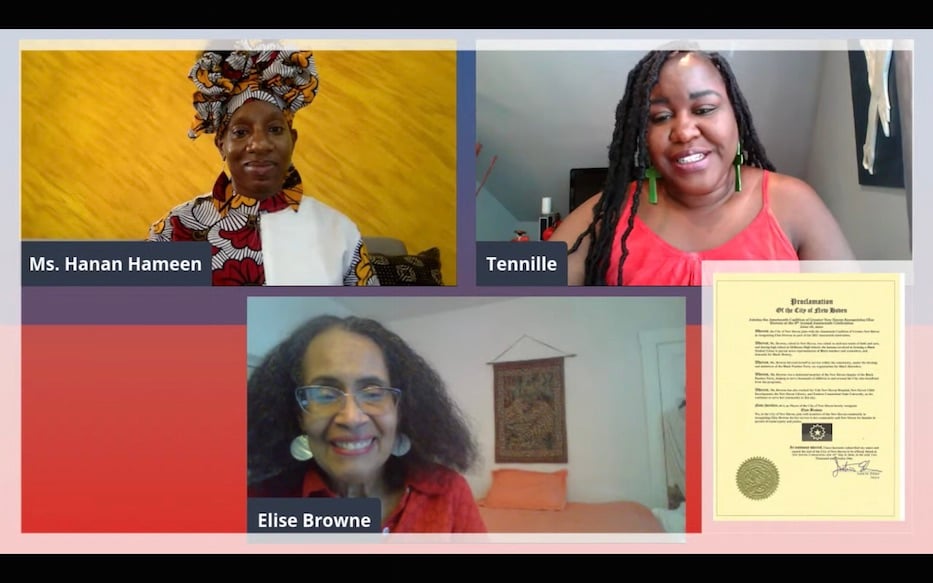 Brown, raised to embrace tenets of faith and care in New Haven, devoted herself to service from an early age. At James Hillhouse High School, Brown organized a Black student union to pursue greater representation of Black teachers, counselors, and Black history.

A dedicated member of the New Haven chapter of the Black Panther Party, Brown helped serve thousands of children in the city who benefited from the Panther’s programs. She also worked for Yale New Haven Hospital, New Haven Child Development Center, and the New Haven Free Public Library (NHFPL).

“She continues to serve her community to this day,” said Murphy, as she presented Brown with her e-proclamation.

Asked if she had any words to share, Brown told the audience that “We need to do things to promote our health, to make a better community, to eliminate racism where we can. Everybody can make a difference.”

The ceremony continued with the honoring of three more elders.

“As we talk about the Black Panthers, we are also acknowledging another Black Panther,” said Hameen. “George Edwards, who is also my cousin.”

While Edwards was unable to attend Friday’s virtual ceremony, Hameen read Edwards’ proclamation and described his life in service to the New Haven community. Born and raised in South Carolina, Edwards served in—then left—the military due to his appall at the use of nuclear weapons.

Edwards was an outreach worker for the Hill Parents Association, a community advocacy group in the city of New Haven that addressed issues like housing, welfare, and police brutality. Edwards was a creator of the Black Arts Theater, where he would act and perform poetry.

He helped to build the New Haven chapter of the Black Panther Party as “a vanguard of the Black liberation movement,” said Hameen. He was a dedicated member of the Party, known for raising money for the organization through the Black Arts Theater.

“Currently, he is a beloved fixture of the New Haven community,” said Hameen. “He’s a library and a force.”

Next, Murphy presented Breland with his e-proclamation. Breland was raised in Syracuse, New York, where he cultivated an affinity for working with young people.

Breland pursued a degree in special education from Southern Connecticut State University in New Haven. He gained celebrity throughout his college career as a basketball player, and he was hired as Youth Director at the YMCA out of college. He soon joined the political arena and worked alongside public figures like John Daniels, the first Black mayor of New Haven.

“I did what I had to do to make things happen for the kids,” he said. 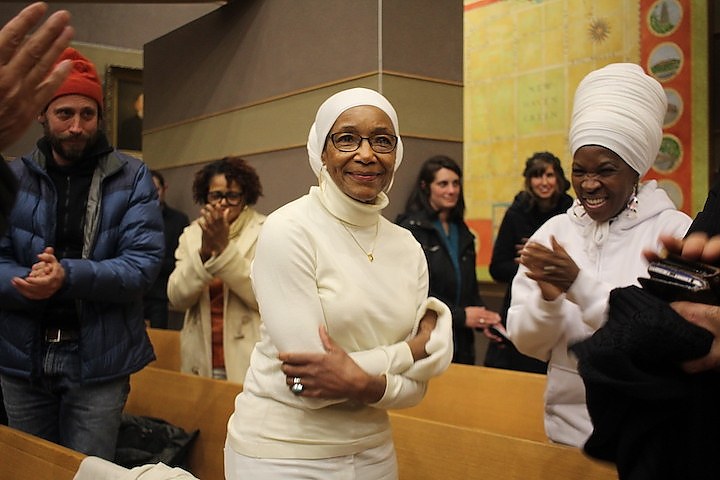 The Elder Honoring concluded with Emma Jones, a steadfast supporter of police accountability. Hundreds of New Haveners know Jones simply as Ms. Emma. Introducing the award, Castillo began to cry as she spoke of the woman she called “Mother Emma Jones.”

In 1997, Jones’ youngest son Malik E. Jones was murdered by East Haven police in an act of state-sanctioned violence. In the decades since, Jones has continued to fight for greater police accountability in New Haven and across the state, fighting both in the street and in City Hall.

In 2019, she was instrumental in the passage of New Haven’s Civilian Review Board, for which she spent 22 years fighting. She has continued to speak out against the triple occupation of New Haven by New Haven, Yale University, and Hamden Police. She now works as a clerk in New Haven Probate Court.

“Her loss and her work has inspired a hell of a movement,” Castillo said.

Castillo described Jones as an important community advocate who exemplifies the pursuit of justice. While she was unable to speak to Friday’s virtual audience, Jones was honored for “the tenacious work she has done in pursuit of justice and equality,” said Castillo.

In that time, Jones also inspired a generation of activists. Castillo, who grew up in New Haven, was a sophomore at Central Connecticut State University when Malik was murdered.

“Although I did not know Malik, all of the students, especially those from New Haven, felt that pain deeply,” she said. “We immediately activated and showed up in New Haven.” 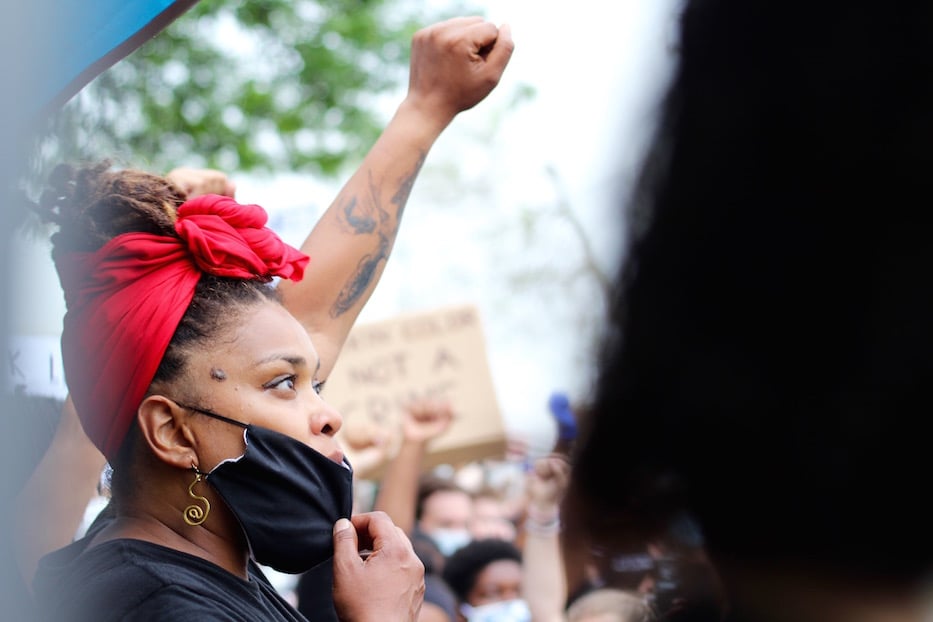 She has yet to deactivate. As the president of Citywide Youth Coalition and a facilitator for the People’s Institute for Survival and Beyond, she has helped organize and lead marches, rallies, teach-ins, and summer camps dedicated to queer and Black liberation.

Last year, Castillo supported Citywide members as they rallied against police brutality and school resource officers. One protest, held in front of the New Haven Police Department, drew 5,000 people. Another resulted in an hour-long dialogue with Mayor Justin Elicker.

He is President of Ice the Beef, an anti-gun violence organization that works with youth in the city of New Haven. He has worked for the New Haven Board of Education for over 20 years and created and run many youth programs. He recently established a new Ice the Beef chapter in the city of Waterbury.

“I’m trying to save my community, and save our children,” he said. “That’s all I care about.”