A Call To History, And Its Soundtrack

The guitar is light, loping, letting the listener curl up in it before they know what’s coming. Background vocals float. Thunder rolls in; there’s the sound of steel on the horizon. Just as it arrives, the lyrics hit. Paul Bryant Hudson’s voice is a bridge: the gap between listener and story vanishes. John Henry has arrived. So has Hudson.

“I was born with it,” he sings. His voice is the tunnel and the hammer at the same time. “In my hand. Like a hammer, like a hammer in my hand.”

So begins Hudson’s “John,” a retelling and self-described folk reclamation of the John Henry mythology that binds it to his own. The release of the song, which dropped on Juneteenth, is the culmination of five years of writing, rewriting, and performing in New Haven. Musicians Jeremiah Fuller, Pete Greco and Travis Hall also feature on the recording.

Hudson has built the song around the legend of John Henry, a steel driver ostensibly born with a hammer in his hand, whose strength and precision were challenged by a steam-powered drill as the industrial revolution took hold. In the tale, Henry races with the drill on behalf of his railroad crew, and wins. The crew is jubilant—Henry has saved their jobs.

But when he reaches the end of the line, his heart gives out. The hammer is still in his hand as he dies. As Hudson said of the song when he performed a version three years ago, “his sacrifice was their survival.”

There are hundreds of ways to read the legend, and music history, labor movements, and artistic adaptations have for over a century. Hudson’s is still fresh: he is less interested in covering old versions or teasing out whether John Henry was a real person (as both scholars and works like Steel Hammer have done in the past decade or so) and more in how it resonates in his own life.

With a voice that is sweet in one breath and a wailing powerhouse in another, he collapses worlds. There’s John Henry’s world, his family’s, and also one occupied by the poet and writer Langston Hughes, darling of the Harlem Renaissance. Hughes wove the story into his own work—in the 1940s John Henry appears in his poem “Love,” as well as a radio play with Paul Robeson titled “John Henry Hammers it Out.” When Hudson invokes his own grandfather, it feels like an overdue continuation.

“For me, he’s like a symbolic ancestor,” Hudson said Friday night, kicking off a panel discussion for the International Festival of Arts & Ideas. “I think about his own contributions in this story, but more importantly the dreams he had, and the way those dreams were, in a sense, deferred.”

It reminds the listener that history is cyclical and porous rather than linear. Artistic output is too. When Hudson’s all-encompassing vocals tell the story of a man who could break the earth itself (”Driving freedom below/The crust and the mantle/Til' it explodes”), they call on the listener to excavate their own understanding of time, myth, and lineage as well.

Friday, the song set the soundtrack to “Slavery and the American Story,” a discussion among journalist and The 1619 Project originator Nikole Hannah-Jones, reporter and Reveal News host Al Letson,  and The Narrative Project Founder Mercy Quaye. Just hours after introducing the song to the world, Hudson performed it live with musicians Eric Rey, Trey Moore and Pete Greco playing a socially-distanced, stripped-down version behind him. 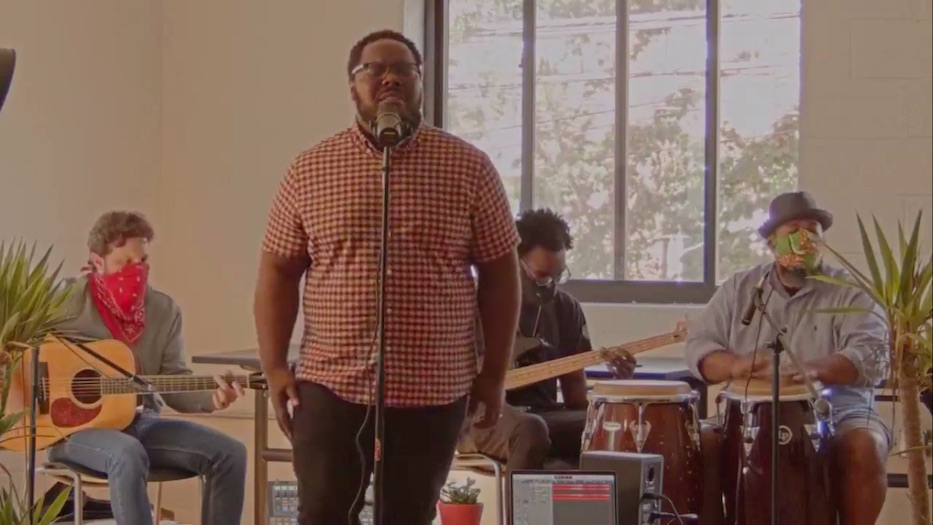 “It’s a folk reclamation piece, right?” Hudson said to the panel. “So the song sort of traces the story of John Henry as it relates to the African-American experience and story. It sort of pays homage to Black American ancestry and kind of recalls some of the contributions of our people.”

The work echoed through the 90-minute panel, as panelists called for a system in which white people move beyond protests and calls to defund the police (which is not, as Hannah-Jones pointed out, a revolutionary ask) and into the work of dismantling white supremacy in the economic, educational, and legislative systems that have knowingly upheld it.

Early in the discussion, Letson recalled walking around a neighborhood in the Bay Area, where he currently lives. The neighborhood is predominantly white; Letson is Black. As he walked, he noticed several new lawn signs that read “Black Lives Matter” and “White Silence Is Violence.”

He “appreciated the sentiment” of the signs, he said. He also knew that the neighborhood had a history of excluding Black people from its banks, housing markets, and zoning codes. He could feel the gulf widening between white people saying Black Lives Matter and actually understanding the full impact and meaning of those words. 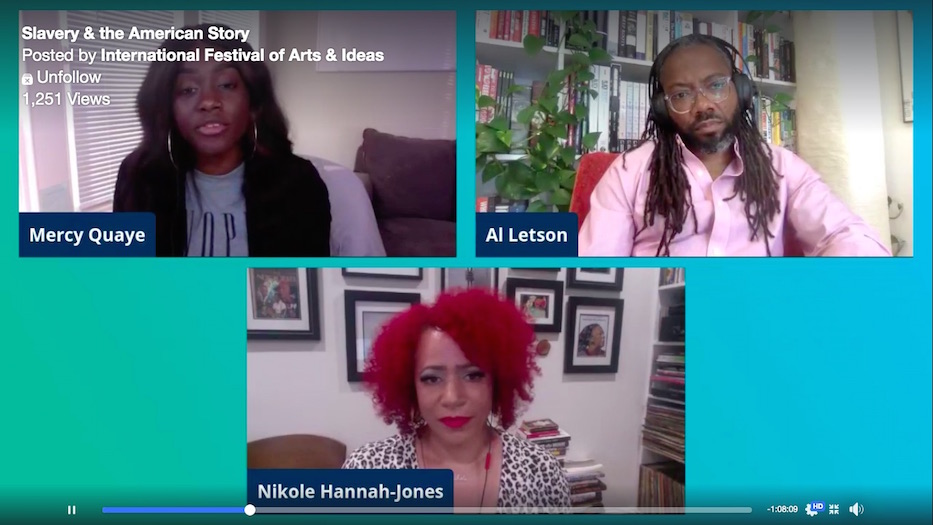 His words resonated in New Haven, where a youth-led Liberation Day march and teach-in traveled from downtown to East Rock Park just hours before the panel. At the front of the crowd, marchers danced to a fleet of drummers hammering out West African rhythms from the back of a flatbed truck. Organizers called for Black joy and Black liberation. They danced shoulder to shoulder down Orange Street, bodies spinning and swaying through a predominantly white neighborhood.

Closer to the halfway point and back of the line, clusters of largely white marchers seemed not to have gotten the memo. They chanted for police abolition and justice from law enforcement. They passed on the opportunity to heed the people’s mic and shout out Black love. On social media afterwards, several called it a “peaceful protest” rather than a march or teach-in, as if they did have the vocabulary for anything outside the systematic murder of Black people.

Panelists added that going forward, the success of the movement depends on how much white people are willing to understand what an anti-racist life means. Hannah-Jones recalled a Tweet from a few weeks ago, in which a white dad explained that he had anti-racist values, but was still sending his child to a predominately white, ostensibly “better” school because he wanted the best for his child. In other words, she said, he only had anti-racist values when they were comfortable to him.

She also pointed to the necessity of acknowledging and telling the full story of American history—including four centuries of deliberate and normalized economic oppression—and acting on that history in the present. That was the initial idea behind The 1619 Project, which unpacked an economy built by enslaved people to justify their oppression.

“We have the unique experience of being, along with Native people, the only people who didn’t choose to be part of America,” she said. “We didn’t immigrate here. We weren’t looking for a better life. We were forced to come here, and everything about our existence starts from that being forced.”

She also described a “faux helplessness” she’s seen among her white peers, who are willing to read a book or listen to a podcast, but won’t push for inclusionary zoning, move out of their white, historically redlined neighborhoods, or advocate for their schools to include history that goes beyond the enslavement of Black people and the Civil Rights era. Until they do, she said, the needle can only move so far.

Letson agreed. To white colleagues and friends who have reached out in the past weeks, he’s chosen not to respond. Instead, he said, he’s focused on the things that are making him happy—like the fact that more Black people embraced Juneteenth this year than in any other year he can remember. Or the fact that 1619 paved the way for other pieces around the same work. Listeners could almost hear Bryant Hudson’t lyrics pressing through the commentary.

“We are the remnants of something powerful and long lasting. And we will continue beyond the nonsense that happens to Black people in this country,” he said, recalling a recent episode of Stoop Talks on which LeVar Burton spoke. “That’s what I want to see more of, is us, embracing that.”

“John” is available for streaming and download on Apple Music, Spotify, Bandcamp, and Tidal. To read about more music coming out of the current moment, click here or on the Arts Paper's "music" tag.