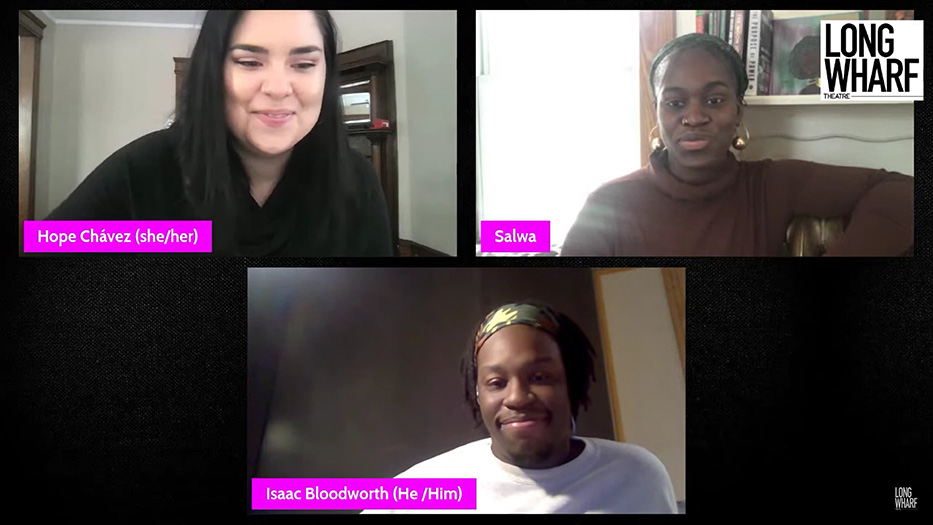 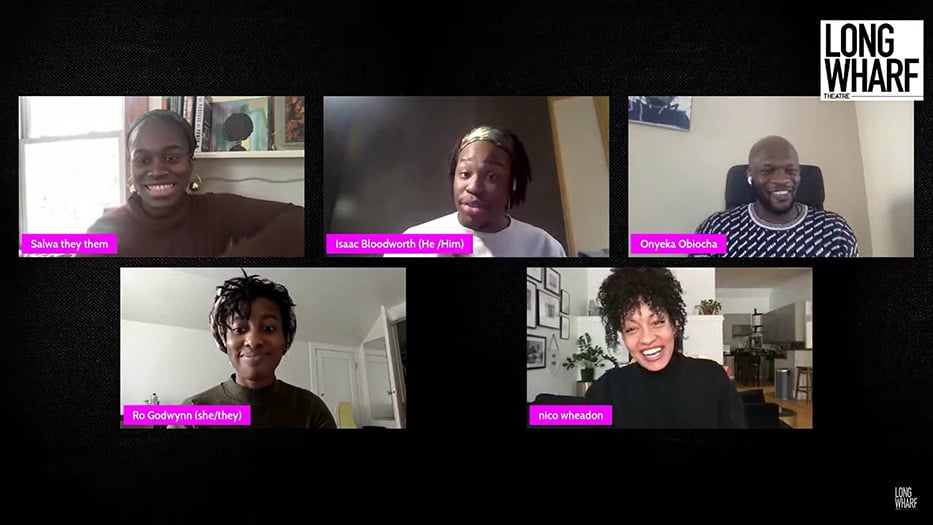 Ro Godwynn has this memory of performing for hours at a local bar, long before a pandemic forced it to close. They and a friend played two sets, back to back at 8 and 9 p.m. They waited hours to get paid. The total each received—at one in the morning—was  was $17.

Throughout the discussion, all of them focused on how young artists of color, especially Black artists, are underpaid and exploited by businesses and institutions. A link to the full discussion is available here. The next installment of The LAB is scheduled for March 12 at 1 p.m.

With a $350,00 award from The Andrew W. Mellon foundation, the project has monetary support for the next two years. Hope Chávez, artistic producer at Long Wharf, said the theater hopes to make it a permanent fixture.

Each month one or more artists are selected as artist(s)-in-residence and each artist is awarded a $1,000 stipend to work on a project of their choice. This month’s artists were Abdussabur and Bloodworth, who held a community discussion as their offering. Projects must fulfill at least one of three criteria: to create civic conversation, develop new plays, and amplify local artists. Chávez said that those may include readings and exhibitions in the future.

Discussions around art and production of art are inextricably linked to capitalism, said Abdussabur. Noting that a finite number of institutions control resource, they pointed to a “scarcity mindset,” which leads to limited allocation of resources. In turn, it hinders  an artist's ability to create freely.

“I am constantly looking for representation and starving for it,” they said. “When I get the opportunity to make something from my mind and have the resources and support to make that to fruition and that is exciting because I know somebody else is starving for it.”

In a separate interview, Chávez noted a tendency among nonprofit organizations to be risk averse.  Their goal is to always break even, she said. As a result, institutions do not encourage or reward riskier investments in artists.

“It’s inherently stepped in white supremacy and gatekeeping,” she said. “It is a model which prohibits certain types of arts and rewards others.”

Wheadon gave the example of later-stage artists in their 50s who have been creating the same type of work for most of their careers. Often, it’s because larger systems with funds—like museums, nonprofits, and art galleries— have rewarded that particular type of “safe” work.

The consequences of living under these capitalist systems often dictates who calls themselves an artist or even practices, said Godwynn. They’ve lived that firsthand: they are a musician and songwriter and also run a line of body products dedicated to self-care. They noted that many people are afraid to call themselves artists or creative because they believe they have to produce an end product that can be monetized.

“The role of an artist is the  stethoscope,” they said. “Let me project so we can all hear to  figure out what is going on from here.”

Many of the panelists commented on the difficulty of trying to make it as a full-time practicing artist in Connecticut, which has some of the most pronounced income inequality in the nation.  Early data collected by American for the Arts suggested that gig workers, freelancers, and individual artists—particularly artists of color—were more likely to lose work and bear heavy economic and medical burdens of Covid-19. As a result, many artists are often forced into predatory and exploitative relationships with funders. 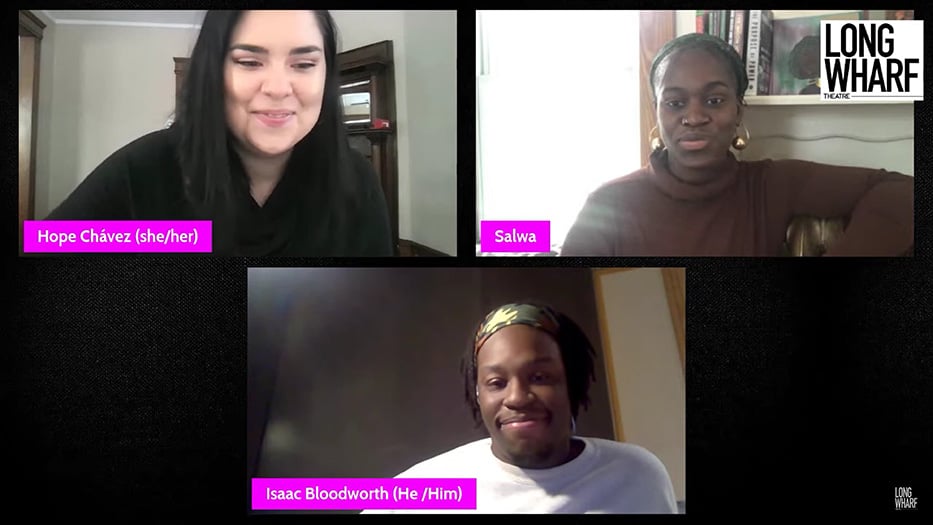 Hope Chávez artists director pictured with Abdussabur and Bloodworth, the artists-in-residence for the month of February.

This idea of art for the sake of making money wasn’t always present, said Obiocha. He gave the example of young Black children who create art without any notion of profitability until something or someone tries to profit from their work. He pointed to white creators on TikTok copying Black creators, only for their imitation to go viral as the original creators go without credit. Suddenly, white people are getting ads and brand deals that Black creatives are left out of.

The transactional and often exploitative nature of art leads to a relationship between artists and institutions that is absent of any personal relationship, said Bloodworth.

“They are looking at us as a means to end,” he said. “You’re not actually building that relationship [with us]. As artists we should make it harder for them.”

Making it “harder” for institutions means making them pay artists their worth, Bloodworth continued—especially when they are early in their careers. Other panelists spoke about refusing to work with venues that underpay or offer to pay in exposure. They also proposed sharing payment information among artists to demystify the process.

Abdussabur said they believe that The LAB @ LWT is a successful model for supporting emerging artists by compensating them for their work and for their intellectual labor. It  allows them to be more experimental with their work, without the fear of it not being profitable.

At the end of the day, these institutions are not faceless entities but made up of people, said Wheadon. As such, they have to be approached as people.

“I’m not going to sit out here with a wish that these institutions become something else,” she said. “How do we build trust to explore these things we both want to create?”

Along similar lines, Obiocha proposed that institutions are in need of a transfer of power, in which predominantly older, white leadership is transferred to younger, more diverse and BIPOC (Black, Indigenous, People of Color) leaders. Cultural organizations in the city remain disproportionately white despite  a pool of talented Black, Brown and Indigenous artists.

He proposed giving more direct support to Black- and BIPOC-led mutual aid organizations and sending money to individual Black artists via apps like Venmo or CashApp. He called both appropriate steps in reducing the influence of these organizations.

“You can center art but you have to give up the endowments and give that money to the people’s hands,” he said. “[The system] has been shown to not be successful.”