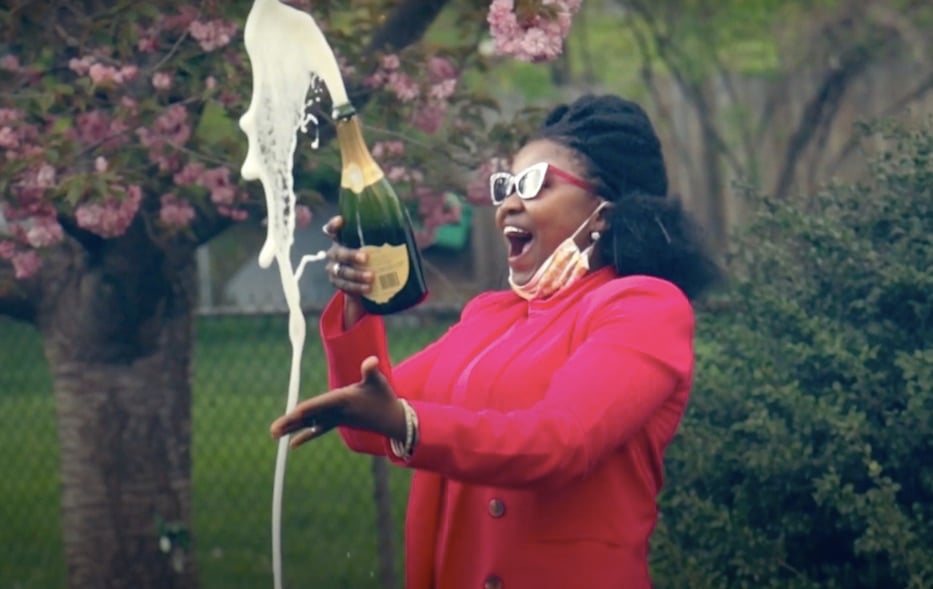 The duckies will still race across the water, but the cheer section has been asked to stay at home. Exhibitions are going up—just on computer screens across the neighborhood. Yarn bombing has been replaced with quarantine-era yard bombing. Thabisa is still planning on making an appearance, but not without her mask at arm’s reach.

Those are just some of the performances coming to Virtual Artwalk 2020 this year, as the event moves online for the first time in its 23-year history. The festivities begin Friday and run through Saturday evening, with hours of live and pre-taped programming that will stream on Facebook.

As in past years, it is organized by the Westville Village Renaissance Alliance (WVRA) and a small but mighty group of neighborhood volunteers. While the event is free, donations and rubber ducky and t-shirt sales will go toward the nascent Westville Small Business Fund.

“It's very exciting,” said WVRA Executive Director Elizabeth Donius. “When everything closed, the timing was such that we knew that we had to make a call, one way or another. At first, I was like, we're just gonna have to cancel it. But we took a beat, and we thought: let's just try and figure it out! We have such great talent here.”

In addition to Donius, there was already a team in place: artist and WVRA Communications Coordinator Noé Jimenez, filmmaker Travis Carbonella, Lotta Studio’s Luke and Mistina Hanscom, and artists from across the neighborhood, from Design Monsters’ George Corsillo and Susan McCaslin to musicians Eric Epstein, Thabisa and Rocky Lawrence. Donius pulled in Jes Mack, longtime member of A Broken Umbrella Theatre, just months after she’d moved back to New Haven.

When COVID-19 meant they could no longer meet in the real world, they started to brainstorm over Zoom. Late March is usually a logistical benchmark for Artwalk, when final supplies have to be ordered and final vendor details fall into place. But this year, that date fell two weeks into state orders to stay at home.

Initially, Donius said, Artwalk didn’t feel like something that had virtual programming in its DNA. Over two decades, the celebration has grown to include interactive dance and acrobatic lessons, bike-powered paint art, marching bands, a large outdoor craft fair and live music. But cancelling it seemed sad, and postponing it felt “like it’s all false starts and unceded future happiness,” Mack said.

“This is interacting with people,” she added. “It feels like, if we get five minutes of awesome, then we’ve won. If we can get our experience together and experience joy in the process, we’ve won.”

Once the group had decided to go virtual, a schedule began falling into place. Musicians offered to perform from their front porches and yards. Artists noted that they could give virtual studio tours. Some already had weekend events, like Chrissy Gardner’s house-bound Friday night Piano Lounge and DJ Dooley-O’s weekend dance parties.

“Every time we talk to people about Artwalk, there’s no loss of ideas about how magical we want this to be,” Mack said. “At first, we were like: how do we have three hours of content? And now, it’s like, how do we winnow down 12 hours of it?”

On Friday night, the celebration begins with Gardner’s at-home piano lounge, beamed out each week over Facebook live. Across the following 24 hours, the Artwalk team has planned virtual dance parties, salsa and bachata lessons, studio tours, and sketch comedy.

Musician Thabisa Rich, who will be performing and then leading the first-ever Art Car Caravan Making Mayhem Event on Saturday morning, called it a testament to the vibrancy of the neighborhood. She has pre-taped a performance from her front lawn, in which her kids and husband Charlie make a cameo. 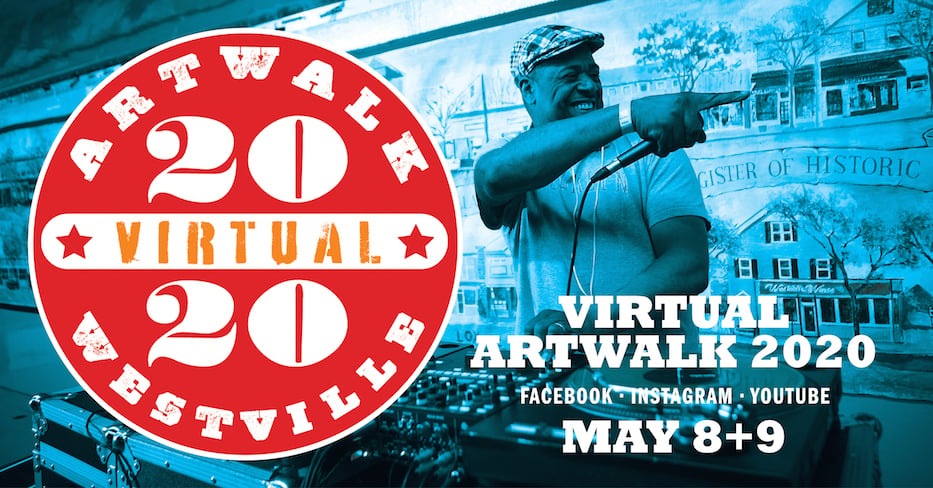 In the place of a large, multi-block craft sale that usually runs outdoors, WVRA is encouraging online attendees to buy from local vendors and order food from local restaurants. There are also online sales, including the first-ever Facebook sale from Vintanthro Modern & Vintage and a 12-hour “Six Square Jam” exhibition, in which viewers can buy a six-by-six inch work of art without knowing who the artist is.

In the process, Artwalk 2020 has become a symbol of neighborhood resiliency. None of this year’s performers and organizers have gone untouched by the novel coronavirus: they are all working artists and small business owners. Between team members, there are stories of lost jobs, filing for unemployment, students struggling with distance learning and school closures, not-yet-received stimulus checks and neighbors relying on neighbors.

Mack and her family, for instance, had just moved back to New Haven from the West Coast when COVID-19 closures hit. Her husband works as an adjunct professor of theater at Southern Connecticut State University. She assumed she would find work after they moved, but has been unable to in the midst of pandemic-prompted hiring freezes and layoffs. Meanwhile, he’s not able to file for unemployment—even though there’s no indication of what may happen after his contract ends in June.

She described her family as one that has “fallen through all the cracks” of promised federal support—a story that has become increasingly common—and praised mutual aid and food recovery and distribution efforts that have sprung up around the city. She recalled a recent meal pickup from the New Haven Public Schools, in which the kindness of a food service worker meant that her family got an extra bag of milk. She’s been moved by the support and small acts of kindness that she’s seen from neighbors.

In the face of such uncertainty, she said, Artwalk has become a very bright spot.

“I don’t think that it’s rooted in escapism,” she said. “I think it’s about finding joy in this very dark and unknown space. Probably in 10 minutes, I’ll be crying in my kitchen. But there is still gratitude to be found. For our togetherness, and for our ability to get through one more day.”

That economic uncertainty has rippled through the community, from shuttered businesses to artists who have kids and careers that are now on hold. Gardner, who now holds The Moose Piano Lounge each Friday, recalled watching as dozens of gigs—and thousands of dollars—were wiped out overnight.

That’s also been true for blues musician Rocky Lawrence, who has been using the time to work from home on a new record and a film that he hopes to get produced. Currently, Lawrence said, all of his work has been cancelled. He’s living off savings and royalty payments that he receives each quarter, for a song he wrote for the Allman Brothers. He is still spending carefully, but considers himself “fortunate,” because he knows he’ll be financially stable for a few months.

On Saturday, he’ll be one of the pre-filmed voices that attendees hear—and see, in a striking red suit—from across all corners of the internet. When Donius first contacted him, Lawrence went into his front yard and measured out 12-foot spacing arrangements for a sidewalk-only audience. But Donius said there were too many liabilities there. As Carbonella filmed his playing on his porch last weekend, people stood to listen and dance in their yards—at a distance.

“It's better than nothing,” he said. “It [the filming] was a pleasant day, and we were lucky to be blessed with good weather. I hope that we can be together next year in person.”

Lawrence added that he feels lucky for another reason: in March of last year, he was flying through Italy for a series of performances that started in Milan. The country, which is the first place he performed internationally, has become a sort of second home for him. He guesses that the same pilgrimage this year would have left him “stuck, sick, or dead.”

The Westville Small Business Fund will go towards helping artists like him, as well as hard-hit businesses and community members who are struggling to make ends meet. For Mack, it’s exactly the kind of work the neighborhood should be doing, as federal relief stalls and some arts organizations fold. She advocated for a world in which small, civically-minded nonprofits provide artist and small business support—because no one else may.

“We are all part of this fabric,” she said. “Like the WPA, art is not going to be made without someone paying for rent and people’s food. So that people have a platform to stand on and create this art.”

“I feel like the existential weight for the future of the arts is really heavy,” she added, likening it to going to the airport after living through September 11. “We’re letting people know that it’s okay to be happy. If we aren’t feeling the full expanse of our emotions, we aren’t going to get through this.”

To find out more about Virtual Artwalk, click here.