Co-Op Actor Lands Role On Board Of Ed 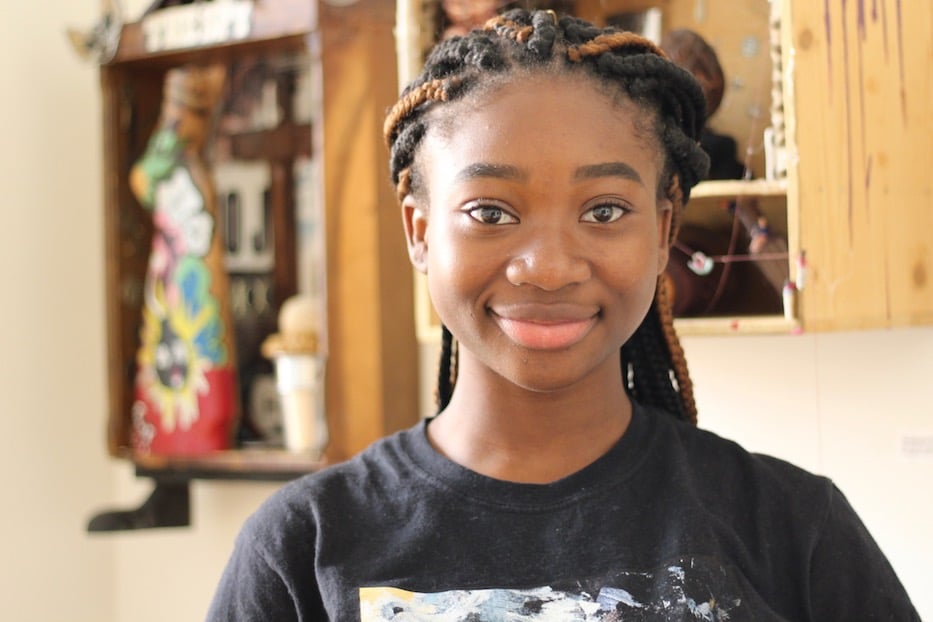 Lihame Arouna grew up problem solving through playbills and music scores, set changes, and careful choreography. Now, she’s stepping onto one of the city’s main stages to see how she can shift the script on public education.

A 15-year-old sophomore at Cooperative Arts & Humanities High School (Co-Op), Arouna is the newest student representative on New Haven’s Board of Education, a non-voting position to which she was elected earlier this month. She will be replacing Hillhouse High School senior Makayla Dawkins, who graduates in June.

“Students know the issues the best because we’re dealing with the issues every day,” Arouna said in an interview Friday morning at Co-Op. “I definitely think it would be beneficial to everyone to have students vote on the Board of Ed. It would put more power in the position that we have to speak for students. But, given the circumstances, I’m still going to advocate for students as best as I can.”

What led her there, she said, was an upbringing rooted in both arts and community organizing. Raised by West African immigrants, Arouna grew up in the city’s Hill neighborhood as the second youngest of four girls. Both of her parents are originally from Togo, and moved to New Haven after several years in New York. Her dad works in packing and shipping for warehouses and her mom owns an African hair braiding business in nearby West Haven.

From a very early age, Arouna was immersed in the arts. At home, there was never not music playing, her mom singing along to the tracks that filled the house and assuring Arouna “that I was going to be a star.”

When she started elementary school at John C. Daniels, Arouna jumped into every school play she could, starting as a munchkin in The Wizard of Oz, then Pepper in Annie, then various roles in Beauty and the Beast, The Lion King and The Little Mermaid. She also joined Music Haven, then a tiny organization operating out of John C. Daniels and Wexler Grant elementary schools.

“Theater, for me, has always been about expressing a greater message to society,” she said. “One musical that I really, really love is Hamilton—because it gets the message across in an entertaining way, with good music and good acting. That’s always been my main thing. To just get a greater message across to the audience. And that goes hand-in-hand with politics as well.”

Arouna was also starting to flex a political muscle. While she was still in middle school, she joined the student senate, interested in learning more about the educational ecosystem that surrounded her. She watched the organizing work that her older sister Cowiya was doing with Citywide Youth Coalition, attending several of the group’s “Dinner & Dialogue” events before joining herself.

“Lihame really took to the work,” recalled Citywide Youth Coalition Executive Director Addys Castillo. “She really got the analysis and she would come to our programming.”

When she entered Co-Op in 2017, Arouna’s life on stage kept intersecting with a growing interest in politics and social justice. In theater, she jumped into Heathers and then In The Heights, falling deeply in love with Lin Manuel-Miranda’s lyrical swerve and commitment to telling community stories—right from those communities.

In her theater classes this year year, she co-directed 12 Angry Jurors, which follows an all-white, all-male jury as it decides the fate of a young Black man convicted of murder. The intersection that she saw between theater and social commentary pushed her to learn more about the medium, she said, which she hopes to keep expanding during her junior and senior years.

“She is a humble leader,” said Christi Sargent, one of Arouna’s theater teachers and the principal architect of a class called “Social Justice Theater” at Co-Op. “Like, you don’t realize she’s coming and then there she is. She has brilliant ideas and she voices them. We’re very proud of her.”

“She impresses me,” she added. “She’s an impressive human. I would gladly accept her as my boss.”

Off stage, Arouna became more involved with Citywide Youth Coalition, studying immigration justice during its 2018 summer program with Connecticut Students for a Dream. She did work with Students for Educational Justice, one of the partner organizations Citywide works with, to advocate for student power and better representation in Connecticut’s curricula. Several months ago, she made the decision to drop violin at Music Haven—for now—because she didn’t want to be “not doing the best I could” as politics pulled her away from practice.

Somewhere along the way she also met Coral Ortiz, a now-graduate of James Hillhouse High School who was one of the first students to serve on the Board of Education and then went on to Yale University. Watching Ortiz call out the adults in the room, question city officials, and ask for better resources and greater civility inspired her. So did the call to intersectional justice that she was seeing all around her.

“Something that’s very popular in the organizing world is having where you come from as a big part of the reason that you’re doing what you’re doing,” she said. “I think that because my parents are from Africa and I live in the Hill, and I see mostly Black and brown children that are my age definitely has to do with why I’m doing what I’m doing.”

“For me, it’s just knowing what’s really going on with students’ education,” she said. “And being able to bring the students’ voice to it. I really think with technology, if we use social media more to connect the Board of Ed to the students, we could do that.”

In particular, she said she believes schools aren’t equipping students with the tools they need to succeed. Even before she ran for the position, she was hearing transit horror stories from friends and classmates—about buses that drove past students who were waiting at their stop, and then had to find another way to get to school. She heard from classmates who were concerned about programs and teachers being cut, a fear that became true this month as 53 teacher positions were reassigned earlier this week.

She said she’s also invested in opening a conversation—or many—about better Black and Latinx representation in school faculty. During her freshman year, she dedicated her first argumentative essay to studying in-classroom representation, pulling apart the data on the number of white teachers in New Haven’s largely nonwhite classrooms. The more she found, the deeper she dug.

“That definitely is an issue,” she said. “I think students of color respond better to teachers of color. Representation is something that is … it’s important. It’ll help students learn better.”

When she finished and presented the essay, the data didn't just stick with her. It also convinced at least one of her teachers to rethink the curriculum they were using.

"Lihame is an extraordinary student," wrote Valerie Vollono, an English teacher who taught Arouna freshman year, and initially assigned that essay. "She excelled at written work and her thoughtful analysis went far beyond what you would expect from a freshman. The best example of this is her persuasive speech, which argued for more diverse representation in the school curriculum."

"After listening to her present this speech to her English class, I made a decision to alter the books I teach in my Honors English 1 class," she continued. "I feel that my curriculum this year better reflected the identities of the students in my classroom and I owe that to Lihame."

This summer, Arouna will be juggling a Yale summer program and organizing with Citywide Youth Coalition. Reached by phone Friday, Castillo said she is excited to watch Arouna’s growth as she takes the skills she is already employing through organizing, and brings them to the educational table.

“Lihame has a very evolved understanding of what it is for young people to have power, and it’s not just about representation of young people at the table,” she said. “She’s not interested in speaking about the work, she’s about doing the work. She’s been amazing. And I’m so looking forward to her stepping into her own power.”