The Disks on the New Haven Green, where they were briefly before heading to City Hall. Lucy Gellman Photos.

A fleet of circular disks stretched across the New Haven Green, glowing in the sunlight. Words peeked out from each in white pen: hopes for the future, drawings of dancers sailing through the air, multiple tributes to the Black Lives Matter movement. On one that read “I Want,” someone had written the word landback in all capital letters. On another labelled “I Dream,” the words “self-care” and “of peace” materialized above a perfect rainbow with clouds at its base.

Ye Qin Zhu, who has been watching the disks fill up for months, stepped back and took a look.

After months of planning, citywide installation and public participation, ten “Diary Disks” are headed to City Hall, marking the end of the first phase of a citywide Covid-19 memorial project. As they fill the building’s atrium and annex, the team behind them is planning its next steps for a longer-term memorial and working to get the community involved. They hope to ultimately create an art park, likely in a remediated brownfield site, with space for healing and personal reflection.

“It’s really exciting to read all that’s written there, and it’s really exciting how much engagement we got,” said Zhu, who graduated from the Yale School of Art last year. “Across the spectrum, so many different people and so many different age groups interacted with these Diary Disks … we tried our best to capture as much of the city as possible and hear their voices.” 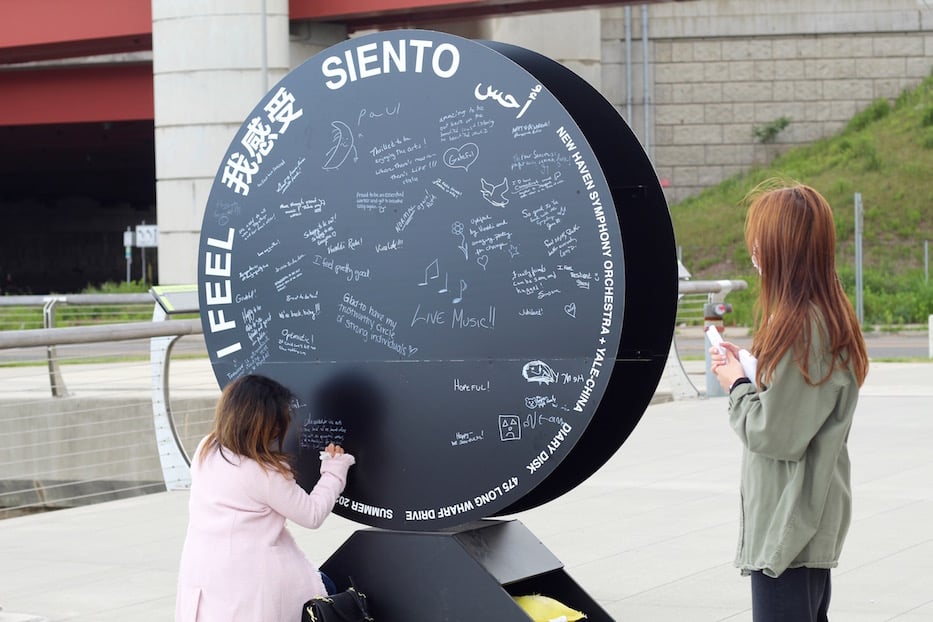 Participants at the Canal Dock Boathouse in May.

The Disks were born last year as part of Design Brigade, a collaboration between Atelier Cho Thompson, the Center for Collaborative Arts and Media at Yale, and partners including the City of New Haven, NXTHVN, the New Haven Free Public Library, Yale-China Association, Yale School of Medicine, the New Haven Symphony Orchestra, CitySeed and Pilgrim Congregational Church among others.

The brigade comprises current and former undergraduate and graduate design students from Yale, who worked closely with the city and partners organizations to bring the disks into  neighborhoods. Last year, the group began thinking about a memorial to victims and survivors of Covid-19, which has claimed over 621,000 lives in the United States since February 2020. Architect Ming Thompson gave them a word of advice that has since become the project’s core: “A designer’s first job is to listen.”

In the summer of last year, they started talking to New Haveners about what they would like to see in a potential Covid-19 memorial. They set up large wooden boards with blank post-it notes at a Juneteenth rally and teach-in in East Rock Park, watching as hundreds of ideas poured in over the course of a few hours. Some New Haveners suggested an art park, with work by local artists. Others wanted to see a response that was more immediate, that wouldn’t take years of planning and fundraising. Others still shared their grief. Zhu on the Green, looking over the Diary Disks before they hit City Hall.

Zhu said he was particularly moved by conversations with Hanifa Washington, co-founder of One Village Healing, who encouraged him to think about giving people space to grieve and to express themselves as part of the healing process. She urged him to consider the role that absence can play in making space for and coming out of collective and individual mourning.

“When people are hurting and there’s different ways of healing, sometimes having emptiness, or having nothingness to direct someone is actually a generous way to engage and heal,” he said, paraphrasing Washington’s own advice to him. “That was really profound for me to think about, because when we think about a memorial it’s always an additive.”

The idea for the disks—huge, standing black-and-white circles with prompts written around the edges—evolved from that. After Juneteenth, team members worked through a number of designs that distilled the post-it-note-on-board concept. The large, standing circles became two-sided blank canvases, easy to write on with white paint pens. The shape is also inspired by the gaping black portals that are synonymous with time travel.

Starting in mid-May, design brigadiers distributed disks around the city, from the Bradley Street Bike Co-Op in East Rock to library branches in Fair Haven, Westville, the Hill and downtown. They hit farmers markets and symphony performances and collected thoughts from healthcare professionals. Zhu said it was particularly important that there were disks in hard-hit communities, where Black and Latinx New Haveners have been affected at a rate far higher than their white peers.

At each location, New Haveners had the chance to write their dreams, desires, and hopes for the future as the city recovers from the pandemic and also mourns its sheer human and economic toll. Responses are as diverse and polyphonic as the city itself: people have written in several different languages, added drawings of masks, clouds, interlocking arms and peace signs, and left words in trembling cursive and swooping bubble letters.

Zhu said that participants ranged from toddlers to senior citizens. At NXTHVN, an arts incubator in the city’s Dixwell neighborhood, high school apprentices got creative with the messages “Who’s NXT?” and “We NXT” on opposite sides of the disk. A jellyfish swims by on a disk from the Bradley Street Bike Co-Op. Nearby, someone has written “Of a just/safe/loved/New Haven” in response to the prompt “I Dream.”

Winter Willoughby, a Design Brigade member who graduated with a degree in psychology from Yale last year, said that she believes the disks are a gesture of collective healing. Planning an art park takes time—years, often—and fundraising. But Willoughby heard overwhelmingly that people needed a space to express themselves immediately. The disks, completed on a shoestring budget, filled a more urgent need.

"People have been experiencing the pandemic alone, but also collectively," she said. "We've been missing physical experiences, in particular, missing that feeling of belonging to our communities. And that is actually a human necessity—that feeling of belonging to something greater, to a group of people. When people share that mental space with each other, wellbeing is actually amplified." Thompson with the first disk at the Bradley Street Bike Co-Op in May. It was placed there as neighbors worked on an underpass mural.

As the disks settle into City Hall—eight will live in the atrium, alongside huge portraits of youth that went up in 2019, and two will live in the annex at 200 Orange St.—members of the Design Brigade are moving slowly into a second, longer phase of the project. Zhu said the first priority is building a memorial committee composed of neighborhood leaders, artists, organizers, and city residents who are excited about the idea. The team ultimately hopes to remediate a brownfield site and transform it into a living art park.

Director of Cultural Affairs Adriane Jefferson said she is excited for the project to continue moving forward with more community input. In the last year, she chaired a committee dedicated to "community wellbeing" with New Haveners who saw their communities hit particularly hard by the pandemic. She listened as people asked for a redistribution of resources and better Covid-19 testing in their communities. She also heard over and over again about the desire for a memorial.

She said that she sees the Diary Disks and longer-term Design Brigade project as an extension of pandemic-era pivots at the city level, including Together New Haven, Civic Space and the city’s evolving Cultural Equity Plan.

To find out more about the Diary Disks, click here. To listen to a recent episode about the disks on WNHH's "Arts Respond," click on the audio above.