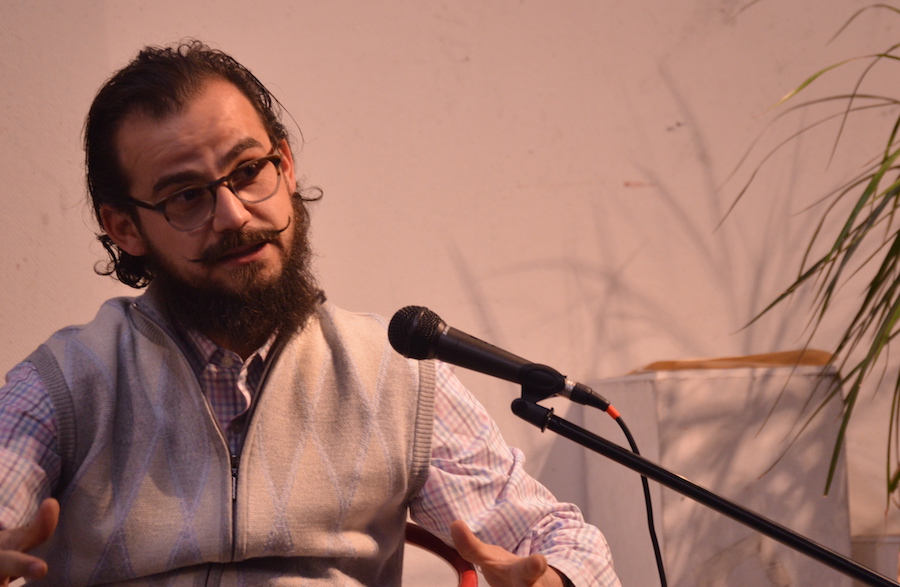 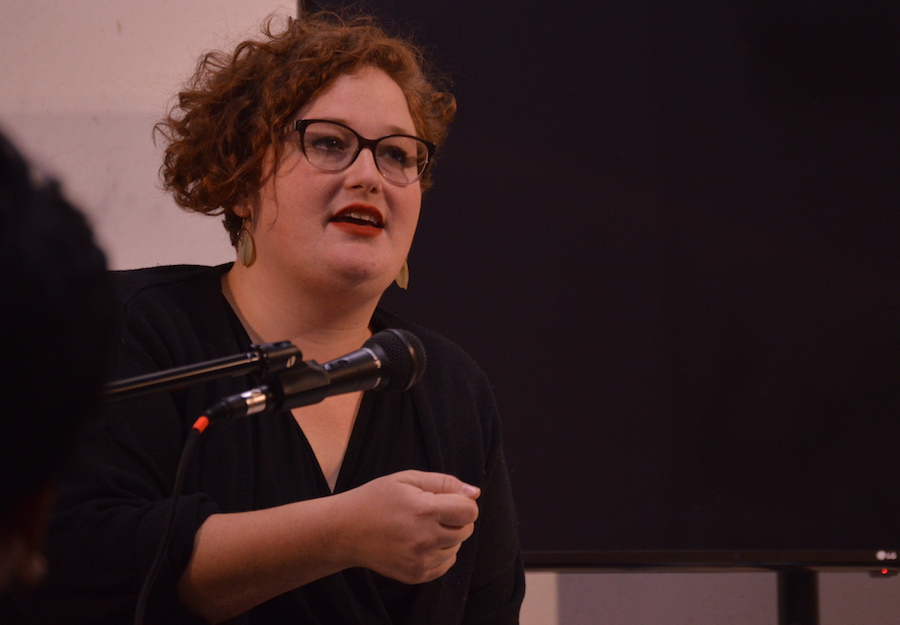 Artwork that tells refugee stories can educate non-refugees about the humanity of those displaced by war and suffering. But it can also remind refugees—and their young children— of history in their native countries before their lives fell apart.

That message came from artists Elizabeth Nearing and Mohamed Hafez earlier this week, as the two spoke on “Immigrant Artists in A Sanctuary City” at “Framing New Haven,” an annual talk and fundraiser for Creative Arts Workshop (CAW) on Audubon Street. About 50 attended the event, which included remarks from Mayor Toni Harp.

While the artists agreed that it’s storytelling that can best engage and educate, they came at it from two different angles. Nearing is a director, producer, and community facilitator at Long Wharf Theatre, as well as a theater maker in the community and co-chair of the Elm City Innovation Collaborative’s new $152,000 “Could Be” Fund. She has collaborated with organizations such as the New Haven Free Public Library (NHFPL) and Integrated Refugee and Immigrant Services (IRIS). 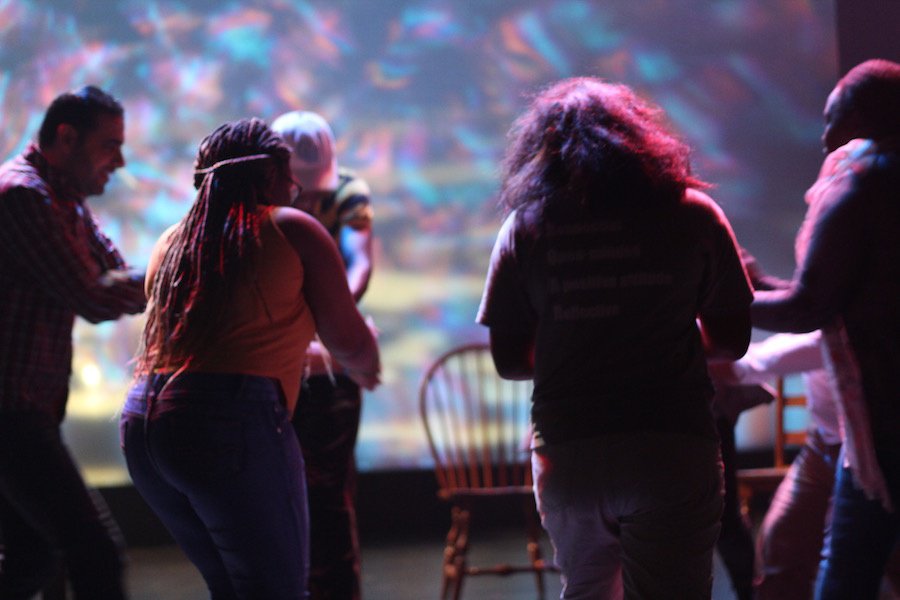 Earlier this year, she worked with a group of refugees from IRIS to produce The American Unicorn at Long Wharf, diving deep into the layered and complicated histories of some of New Haven’s newest residents. Speaking first, she said that she finds theater to be first and foremost an art of collaboration. She mentioned two post-it notes she keeps by her desk, stuck to the bottom of her computer at all times. One reads “with, not for.” The other reminds her that “change happens at the speed of trust.”

She told the audience that when she was producing The American Unicorn, the work’s strongest moments came from discussion that became part of the play. She recalled a high school student, Ruben Kwigwasa, who spoke about his time in a refugee camp in West Africa as a time of found objects — making go-carts out of empty crates and soccer balls out of plastic bags. Despite being aware of the violence and war around him, Ruben still recalled safety and play in the same space as the scary parts of his camp.

Hafez, a Syrian artist and architect who creates miniature, doll-sized models of destroyed homes and streetscapes, takes a more immersive approach that’s private and intimate until his work is suddenly public. While his pieces first started as a personal project rooted in his own nostalgia, they quickly became a tool for political statement when his brother-in-law, also an architect, became a refugee living in Sweden after fleeing the Syrian Civil War. Since beginning his work, he has shown pieces at UNICEF’s New York offices and the Brooklyn Museum among other venues.

Hafez himself immigrated to the United States 15 years ago to attend college in Iowa. Despite the fact that he migrated by choice, he said that there’s often an assumption that he is a Syrian refugee.

“Visas are very easy to get with my Syrian passport,” he said drily, laughing as he read a list of border security triggers from his screen— childhood in Saudi Arabia, named Mohamed, Muslim, bearded, Syrian.

Under the George W. Bush administration, Hafez and other Middle-Easterners faced intense barriers to traveling in and out of the United States after Sept. 11, 2001. Despite having proof of employment and a mortgage in the United States, Hafez was labeled an “intending immigrant” when attempting to visit his friends in Europe or attend his sister’s wedding in Syria. His miniatures of Middle Eastern cities were first a way to cope with what he felt was a sort of exile from his homeland. 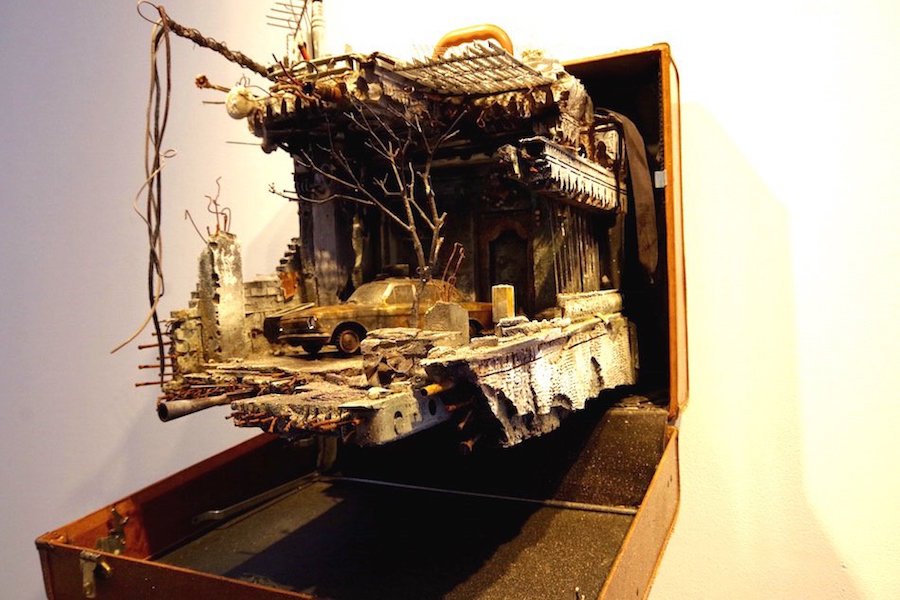 But he also said that he sees art telling refugee stories as a teaching tool for refugee kids to remember their homelands. Like Nearing’s experience with The American Unicorn’s cast, part of those stories is remembering the sweet that comes with the bitter.

“It’s important for these kids to learn their roots,” Hafez said.

Asked about their dream venues, Hafez recalled a moment almost exactly a year ago, when the Secretary General of the United Nations happened upon his exhibition at UNICEF, across the street from the UN assembly.

“How else would my subject get her story here?” he recalled thinking.

Nearing said she wants to be able to create something with people from different “levels” and walks of life. An attendee at the event noted that viewers of Nearing and Hafez’s work might already be inclined to show up—that the work may draw those who already believe immigration is just and humane. Nearing agreed that it was important to consider how refugee art can present an echo chamber—and then break through that.

Framing New Haven, for instance, was a ticketed event, with attendees shelling out $50 per person. The event was supported by board members and former members of Creative Arts Workshop, yet Nearing wanted to recognize that even the attendance at this talk was not the most diverse. Of those present in the room, few were people of color, including Hafez, Mayor Toni Harp and this reporter.

“Think about who’s in this room and who’s not,” she said.