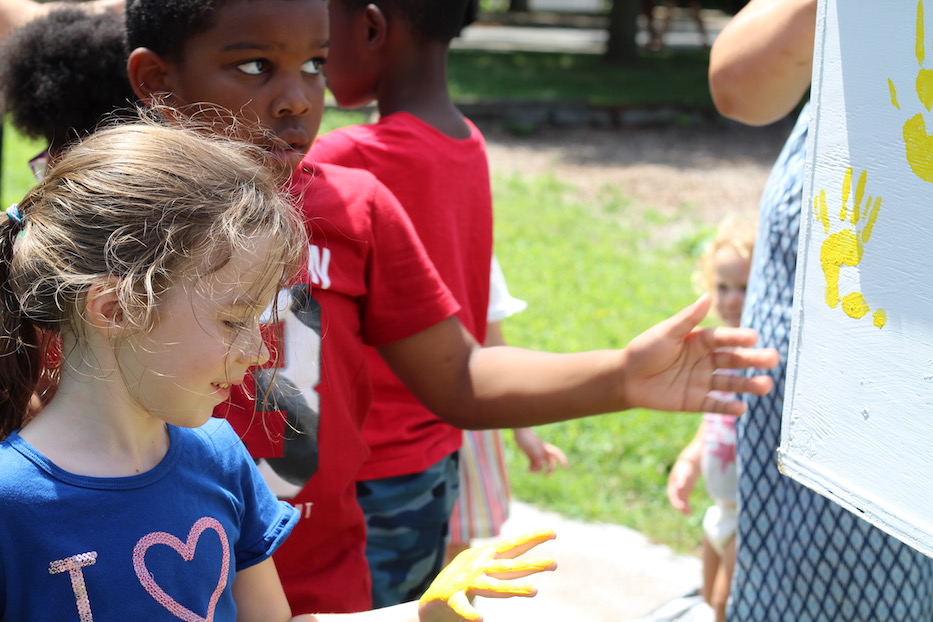 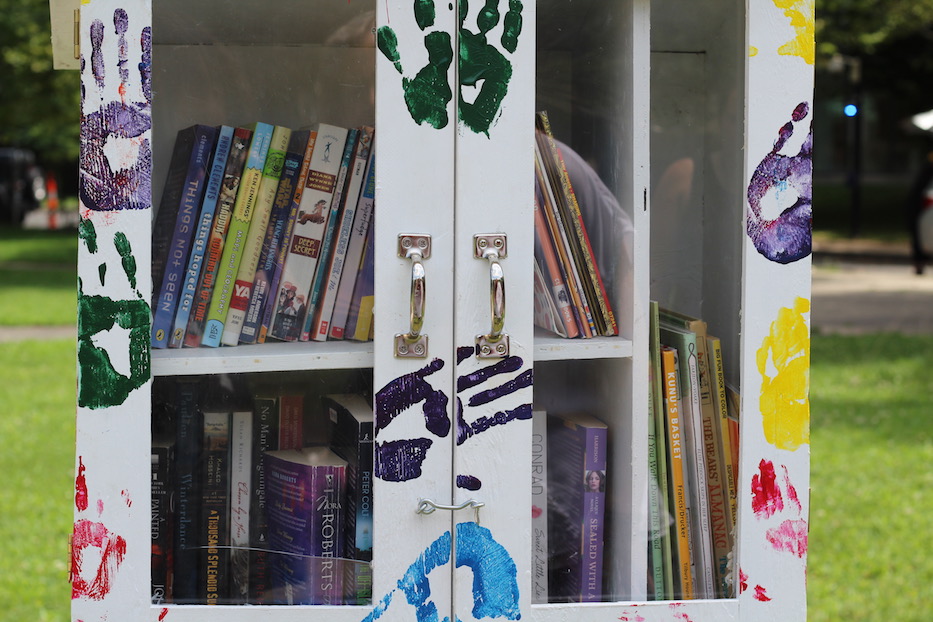 A little library has started blooming in Scantlebury Park. On its sides, small, still-fresh handprints bloom in yellow, orange, blue, red, and green. A few big ones in purple have edged their way onto the front. Letters that run along one edge read Today A Reader, Tomorrow A Leader. Streams of water glisten and spring up from the splash pad nearby. And as it grows, some New Haven’s youngest residents are helping it come to flower.

The library marks the latest iteration of Help Your Shelves, an ongoing collaboration among New Haven Reads (NHR), MakeHaven, and the New Haven Land Trust that has taken root in six of New Haven’s neighborhood parks and gardens over the last several months. After a year of planning and community build day in early May, Help Your Shelves’ libraries have been installed in Scantlebury Park, Cedar Hill Park, the Truman Street Greenspace, and on Clinton Street in Fair Haven.

Two more await placement on Chapel Street downtown and the Field of Greens community garden, which is located on Arthur Street in the city’s Hill neighborhood. In each instance, the Help Your Shelves team is working with local artists and community members to decorate the libraries, to transform them from simple white structures into wild blooms of color.

“I’m excited,” said Kate Cebik, operations manager at MakeHaven and a partner on the project. “It’s very cool that it has come to fruition in this way.”

Wednesday afternoon, organizers got a hand decorating their latest library in Scantlebury Park, as young New Haveners gravitated towards a table covered with colorful paint and foam brushes. With help from NHR instructors, students held out their hands for even paint coverage, then pressed them into the white sides of the box. Some came from NHR's weekly kindergarten program, which runs mornings across the street. Others were simply in the park and wanted to be part of the art making process. 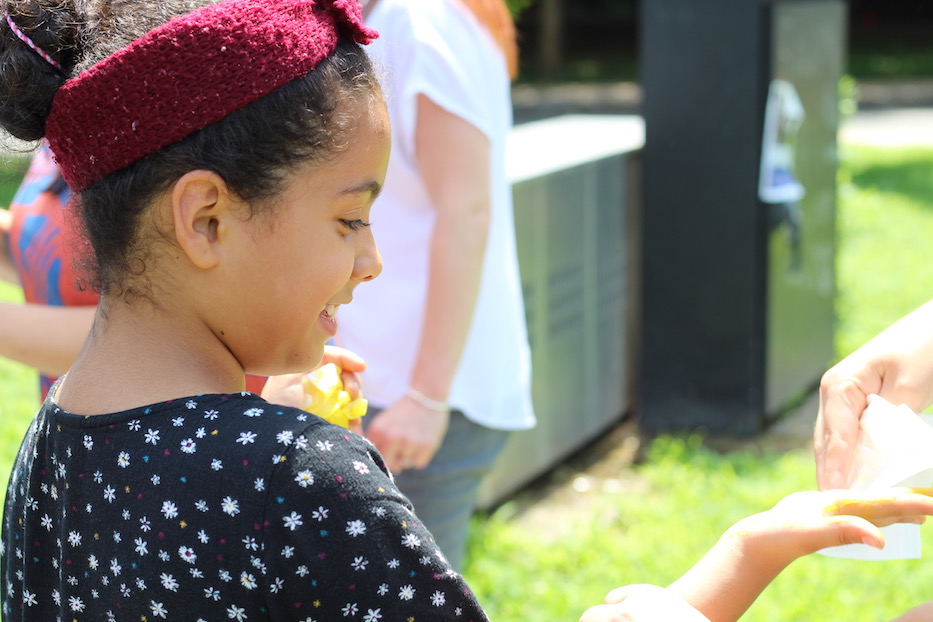 For pint-sized painters like Hajer Elkot (pictured above), a student in NHR’s summer kindergarten program, the activity was a chance to flex her creative skills. A budding reader, she said that she wants to be an artist when she gets older and loves anything that brings her in touch with paint.

“I liked this because I do a lot of art at my class in school, and this is like that,” she said before running to play in the nearby splash pad.

So did Tamara Brantley, a six-year-old who chose green paint in honor of her older brother. As a student at New Haven Reads, she said she wanted to get paint on her hands because it seemed fun. As she applied one green handprint to the back of the shelf, followed by a second on the side, she broke into a wide smile.

Nearby, five-year-old Janaye Armstrong squealed with delight as she realized that the colors she had chosen—blue paint for one hand and red on the other—mixed to make purple. A young reader and aspiring veterinarian, she is learning about primary colors in school and said she was excited to see what happened when they mixed firsthand. 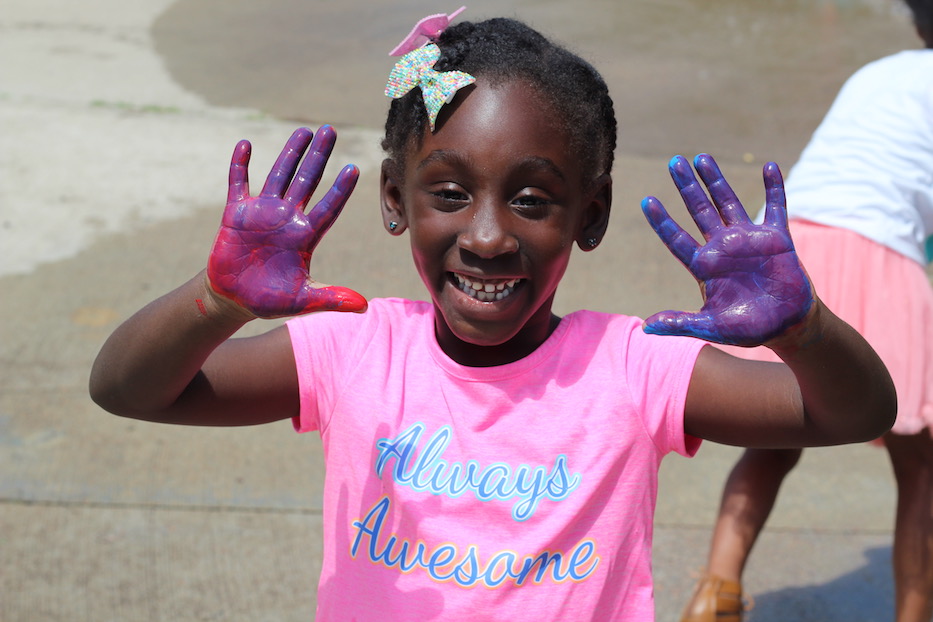 As students dispersed to run through the nearby splash pad, NHR Director Kirsten Levinsohn began to fill the shelves with books, debating where to put titles that included Tony Johnston’s Any Small Goodness, several well-loved picture books and a crash course on manatees. She said that the aim is to have books for readers of all skill levels, from very young kids to the teens and adults that may accompany them to the park.

“I’m really glad there are adult books!” laughed Cebik as she inspected the first installment. “When you’re not in the habit of reading, it’s too easy to go home and turn to Netflix instead.”

The bright handprints aren’t the only draw of the library: it has also gotten special touches from Ruby Gonzalez Hernandez, an artist who grew up in New Haven and has chosen to stay for the community. As she drew out two inscriptions on Wednesday—Today A Reader Tomorrow A Leader on one side and Once You Learn You Will Be Forever Free on the other—she recalled her own reading journey, which started at the Fair Haven Branch library when she was just a year or two old.

As a kid, Hernandez spent a lot of time at the library, where her family went to pick up books in English and Spanish at least once a week. Raised in the neighborhood, she said it became a refuge in the city, where she could read all about people who had different lives, came from different countries, spoke different languages.

“I feel so happy that organizations like New Haven Reads are taking this initiative to give the community free books,” she said. “I see reading teaching kids about empathy, and definitely emotional intelligence.”

She added that she doesn’t see the project as a small gesture. In 2017, she was one of several New Haven students in Artspace’s annual Summer Apprenticeship Program, taught that year by artist and NXTHVN Founder Titus Kaphar. As apprentices worked toward a summer exhibition called Arresting Patterns, they visited a correctional facility in the state.

Hernandez recalled Kaphar telling the group that a prison’s original size was determined by the percentage of a town's population that read below a fourth grade level. As she processed the statement—a data point that has since been discussed as complicated and more complex—"I remember being dumbfounded.” Since, she said she’s dedicated her work to giving back to the community with projects that encourage literacy of all kinds. In addition to her work with MakeHaven, she taught in last year’s Summer Apprenticeship Program and is a co-owner of Lunch Money Print.

“This is a decision to impact the community in a positive way,” she said. “That never goes away.”

New Haven Reads is also looking for tutors. To find out more about tutoring, visit their website.