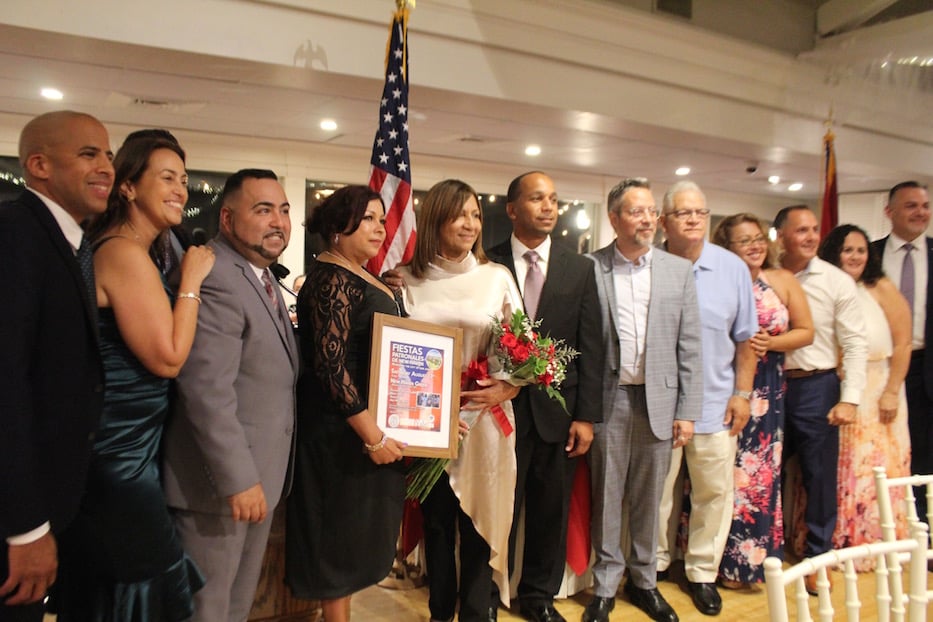 A champion of immigrant rights who turned her lived experience into a platform for organizing and outreach. A tireless salsera whose decades-long practice has criss-crossed the city and made her “an honorary Boricua.” A Hill neighborhood institution where Latino seniors can age with dignity in an affordable housing crisis. And a military veteran with a message that nada es impossible—if you are willing to be presente.

Those were just a few of the honorees and speakers at Amarante’s Sea Cliff Thursday night, as Puerto Ricans United (PRU) returned to its first in-person gala since 2019. Dedicated to “la Mujer Puertorriqueña”—the Puerto Rican woman—the event recognized community leaders, cultural champions, and organizations that work around the clock to support and amplify Puerto Rican voices in and around New Haven.

It took place against a national backdrop of extreme rollbacks on reproductive rights that disproportionately penalize Black and Brown women and in the third year of a pandemic that has killed Latinos at a rate far higher than their white peers. 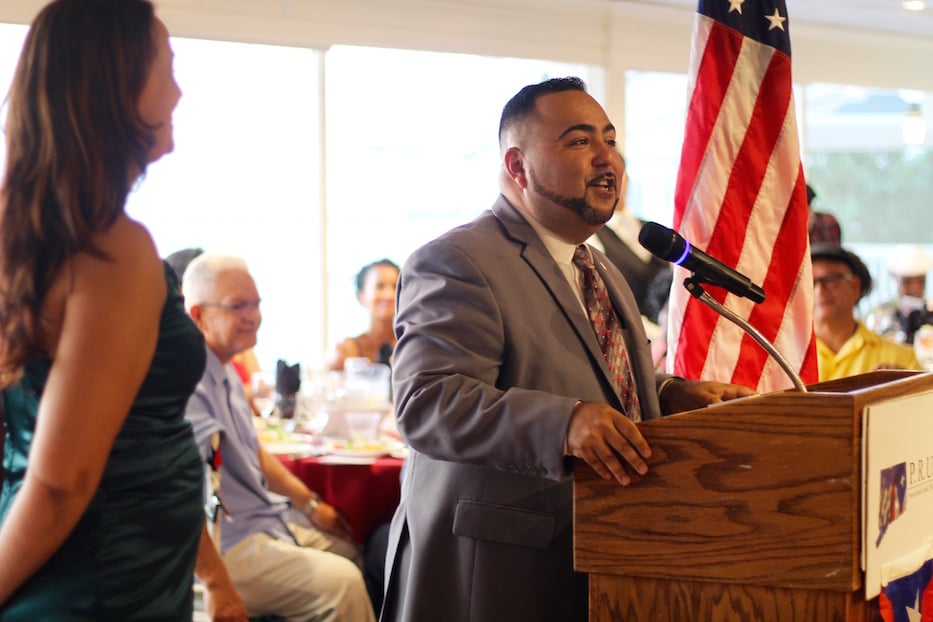 PRU President Joe Rodriguez: "We’re recognizing the pioneers that were before us, the champions among us." Lucy Gellman Photo.

"We’re recognizing the pioneers that were before us, the champions among us. We stand on the shoulders of others, and so many of those individuals are women.”

Formed in 2015, PRU is a New Haven-based organization dedicated to celebrating Puerto Rican arts and culture year round. In addition to its annual festival, it holds a Parranda Navideña or Christmas Parranda each December, hosts toy drives and a Three Kings Day celebration, teaches students about Puerto Rican culture, and commemorates the abolition of slavery in Puerto Rico. This year, the festival is planned for August 13 on the New Haven Green. 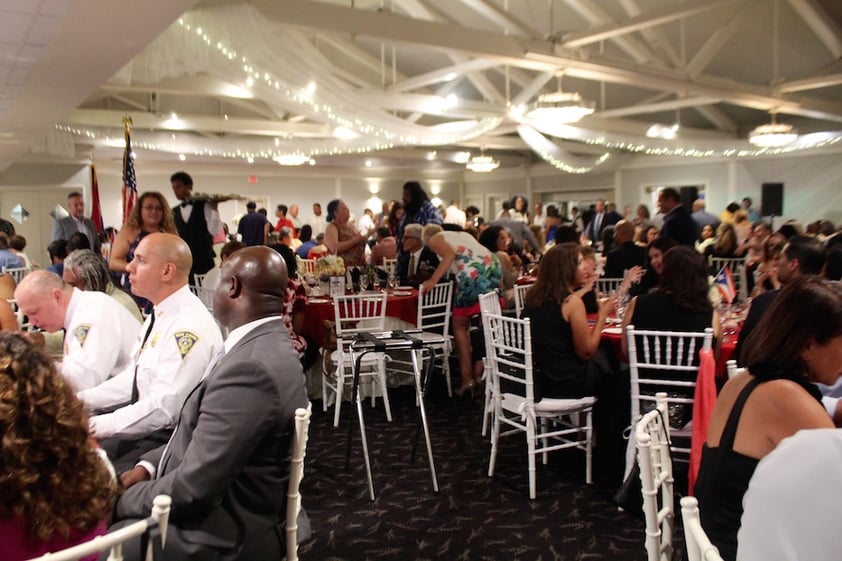 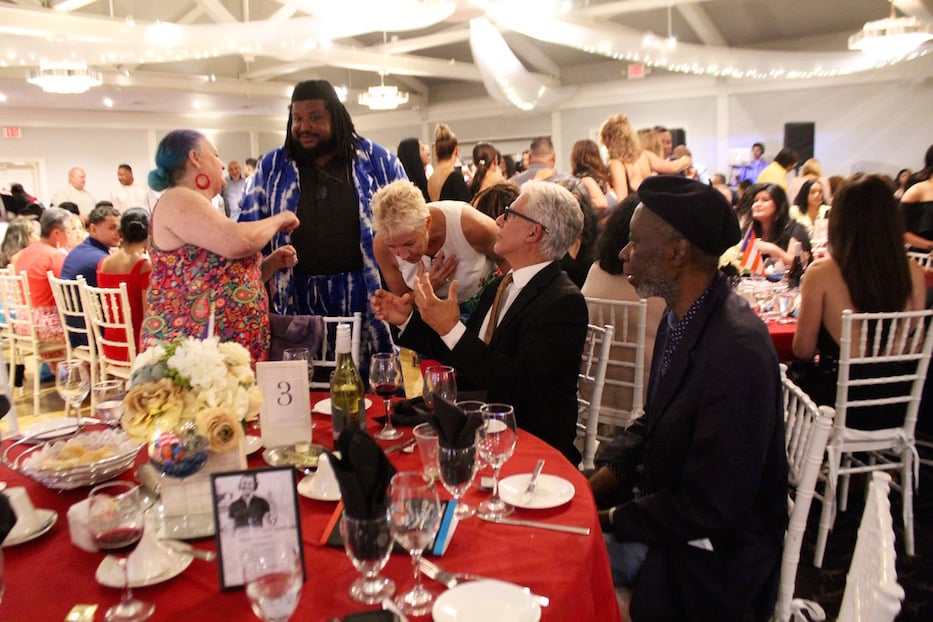 Thursday night, the spotlight remained on women in the audience, from awardees to the moms, daughters, grandmothers and sisters they had brought with them. Honorees included Cheila Serrano, director of social services at Junta for Progressive Action, salsera, brewer and coffee roaster Alisa Bowens-Mercado, the Hill-based nonprofit ​​Casa Otoñal, and PRU supporter Ricardo Caliz. A special award went to Feny Taylor, who has supported PRU and the greater New Haven community for decades.

The recognition began early in the evening, as attendees mingled beneath twinkling lights and a tent set up on the deck outside. Inside the ballroom, seating for 300 people waited quietly for the shuffling feet, long and shimmering dresses, and cacophonous conversations that were soon to come.

Small Puerto Rican flags peeked out from the center of every flower arrangement in the room, turning it into an undulating sea of red and blue. On each table, PRU had placed a photograph and bio of a notable Puerto Rican woman, from ​​María de las Mercedes Barbudo to Lolita Lebrón to Ruth Fernández Cortada and Sila Maria Calderon.

At each seat, a booklet designed by New Haven artivist Juancarlos Soto—himself a proud member of PRU’s board, with his own story of finding home in New Haven—featured three women beneath a Puerto Rican flag. Rodriguez called it a nod to the Taíno, Black and Afro-Caribbean, and European women who all exist within Puerto Rican culture. 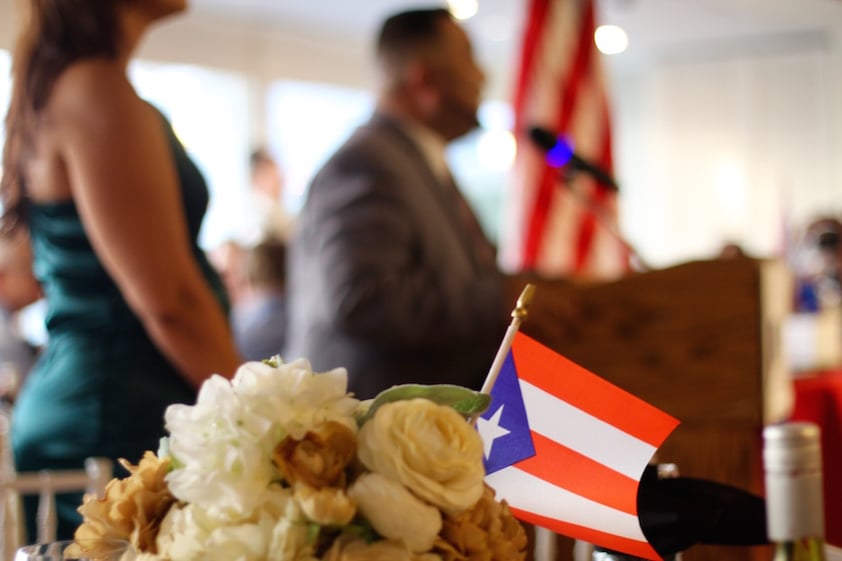 Outside, Serrano wove through the crowd in a seafoam-colored gown, blushing every so often as attendees offered their congratulations. The second of ten children to parents from Naranjito, Puerto Rico, Serrano grew up in Fair Haven and the Hill, in what she called “a very full house” where everyone got along. The neighborhoods were rough then, she said—but they were also tightly woven, and full of people who looked out for one another.

Even as a child, she understood that she wanted to one day be one of those caring neighbors.

In school, she knew that she could count on beloved educator Dr. Abie Benitez. Outside of the classroom, she looked to then-Alder Evelyn Rodriguez, who took her on her first trip to New York City. Down the block, Norma Franceschi of R&M Corner Market, still a Castle Street mainstay, always kept an eye out for her and her siblings. 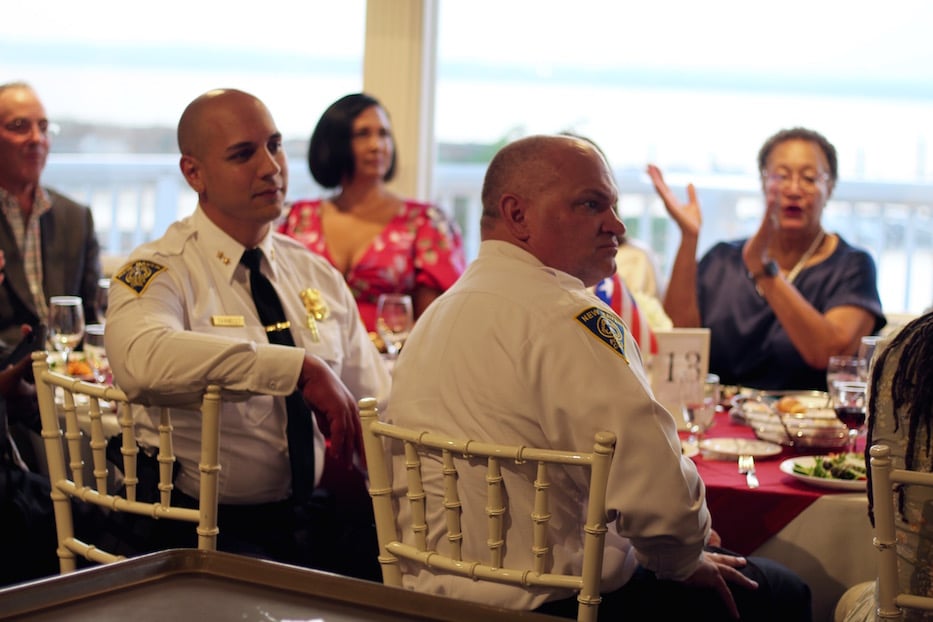 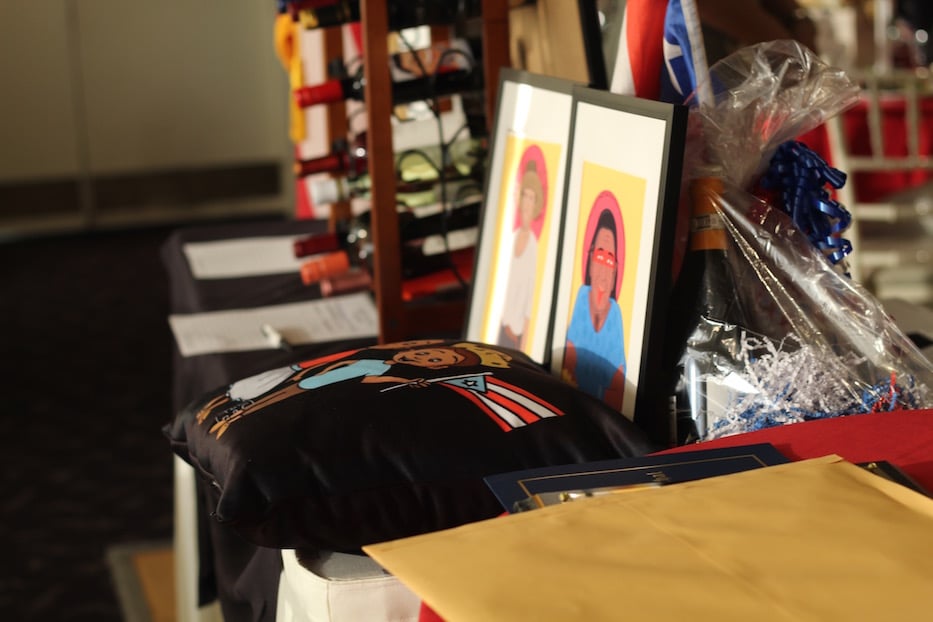 Top: Rodriguez shouted out NHPD Chief Karl Jacobson, who has been in the role for less than a month. Bottom: Soto's art featured prominently in the silent auction. Lucy Gellman Photos.

When she graduated from Wilbur Cross High School over two decades ago, she chose to give back to the community in the way people had given back to her. It led her to Junta, where she stayed as she built a family with her husband and two daughters, now both students at Metropolitan Business Academy. At Junta, that now-instantly-recognizable white-paneled house at 169 Grand Ave., she fell in love with the work, and with the people she was serving.

She thanked current Executive Director Bruni Pizarro for steering the organization through Covid-19, and praised former Executive Directors Kica Matos and Sandra Treviño as particularly influential in her own professional journey.

“I’m so proud to be part of that community today, and I’m just gonna die working for the community and the people,” she said. “Junta … opened doors where I could be myself, that I could treat the people how I want to, with respect.”

Soto, who worked alongside Serrano at Junta until 2016, thanked her for giving him a platform for advocacy work—and a role model who he could (and still does) consistently look up to. Pizarro recalled meeting Serrano in 2017, when she was still a graduate fellow at Junta.

At the time Serrano was working to help families displaced by Hurricane Maria resettle in New Haven, and always found time to lead with kindness and compassion, Pizarro said. She was, literally, the calm in the storm. That was still true when Pizarro became interim executive director in early 2020, and found herself jumping from earthquakes in January 2020 to Junta’s pandemic response in mid March. Serrano was there, a steady presence, the whole time.

“It was challenging, those first couple months at Junta, but I was confident with her as our director of social services, that with her leadership, that we were gonna make it through,” Pizarro said. “These last two years, I have seen Cheila go through all the challenges of this era, we’ve gone through this together.”

She turned to Serrano as she spoke. “I’ve been humbled by your brilliance, your dedication, your humility. And what always remains consistent and unwavering is your commitment to serve the community.”

“I Have A Lot More Dancing To Do” 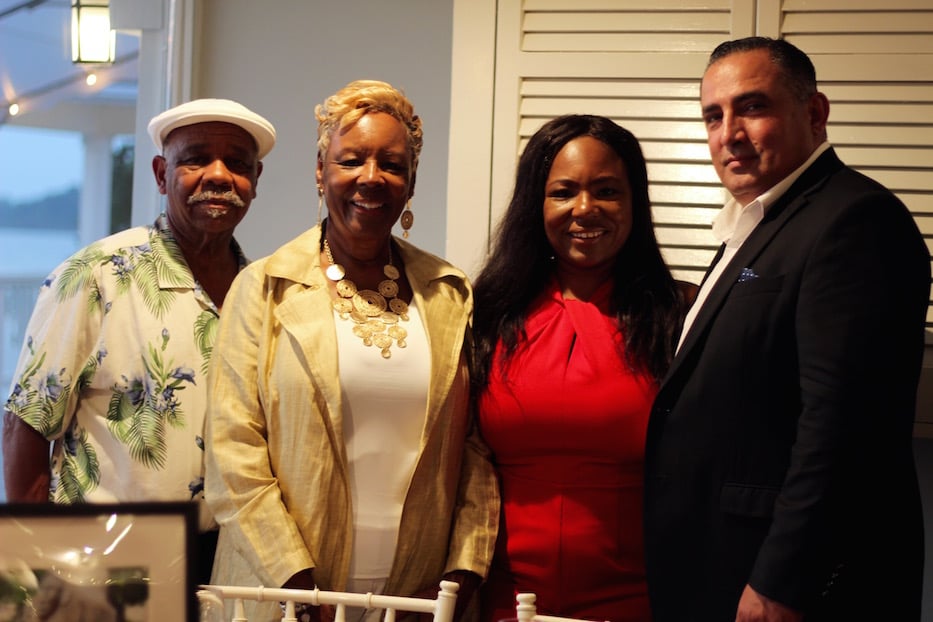 As a woman who has helped build community through her work, Serrano was in good company. Bowens-Mercado, who has run Alisa’s House of Salsa for 22 years and Rhythm Brewing for four, received a standing ovation, cheers, whoops, and applause for her contribution to arts and culture in the city. Born and raised nearby in Bethany, Bowens-Mercado has been dancing ever since she was three years old, and begged her parents for lessons at Gloria Jean’s Studio of Dance in West Haven.

The studio “became my second home,” she recalled. During her youth and teenage years, she competed across the tri-state area. Her dance life felt vibrant and full; she didn’t know that salsa was missing until suddenly she did. It wasn’t until she was on a business trip in her twenties and walked into the El San Juan Hotel that she felt the seductive pull of the art form.

“I was like, whatever these people are doing, I want to be doing it,” she said with a laugh before the awards ceremony. When she returned to Connecticut, she signed up for salsa lessons, and then got good enough to teach it herself. She formally founded the studio in 2000. In two decades, she has occupied multiple studios and also made the New Haven Green, Peabody Museum, several town centers, and most recently Central Avenue into her dance floor.

That came to a screeching halt in March 2020—the same year that the studio was set to celebrate its 20th anniversary. Like many artists forced to close their doors, she lost almost $10,000 in under a week. When the cancellations kept coming, Bowens-Mercado pivoted, and then pivoted again. She found that the support of a community got her through. 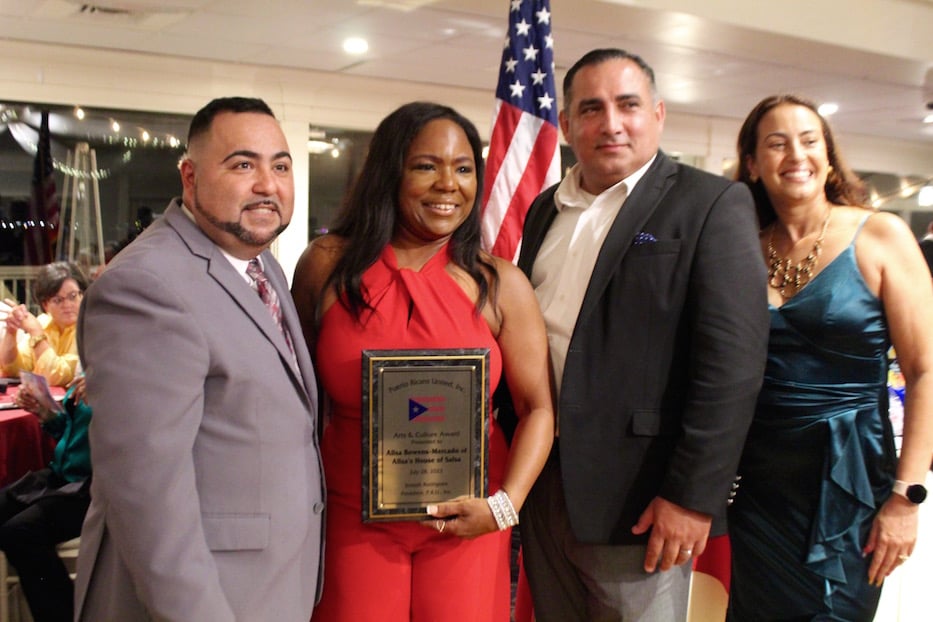 Her beer business, including new nationwide collaborations, boomed. She learned to teach outdoors, and cautiously reopened her doors with CDC guidelines and limited attendance in place. She started work on a new coffee roasting venture dubbed Rhythm Roasting that now serves Hartford Healthcare and Cornell Scott Health Center. And she kept dancing. She will be that 95-year-old on the dance floor one day, she joked Thursday.

“I have a lot more dancing to do,” she said, tearing up as she spoke. “When I see your faces from different parts of my life, you guys have been so supportive. If you can come and see me and let it go for a little while and find peace and comfort through salsa … that's why I do what I do.”

“A lot of you have walked in as students and walked out as friends,” she added.

Many of her biggest fans—including her parents, Millicent and William, and 13-year studio veteran Frank Hall—were in the room Thursday. PRU Board Member Magaly Cajigas remembered those early days of Bowens-Mercado’s business, which ran out of the same 858 State St. building that now houses Michelina's Apizza and Ristorante.

Before her daughter was born, Cajigas and her husband, Eddie, took salsa lessons as a way to get past his two left feet. The two loved it so much that they continued lessons until Cajigas was six months pregnant. Even as she became a new mom, Cjajigas never forgot about the magic of those lessons. When Bowens-Mercado urged them to keep an eye on her trajectory, they did.

“She said, ‘You guys just need to follow me,’” Cajigas remembered. “She’s 100 percent Boricua in our eyes.”

“She has been dancing her way through the whole city,” added State Rep. Juan Candelaria, who also praised Casa Otoñal for its service to the elderly Latino community. Founded in 1976 in New Haven’s Hill neighborhood, the nonprofit provides affordable apartment housing for seniors 62 years and older. The building, where PRU holds a Three Kings Day celebration each January. 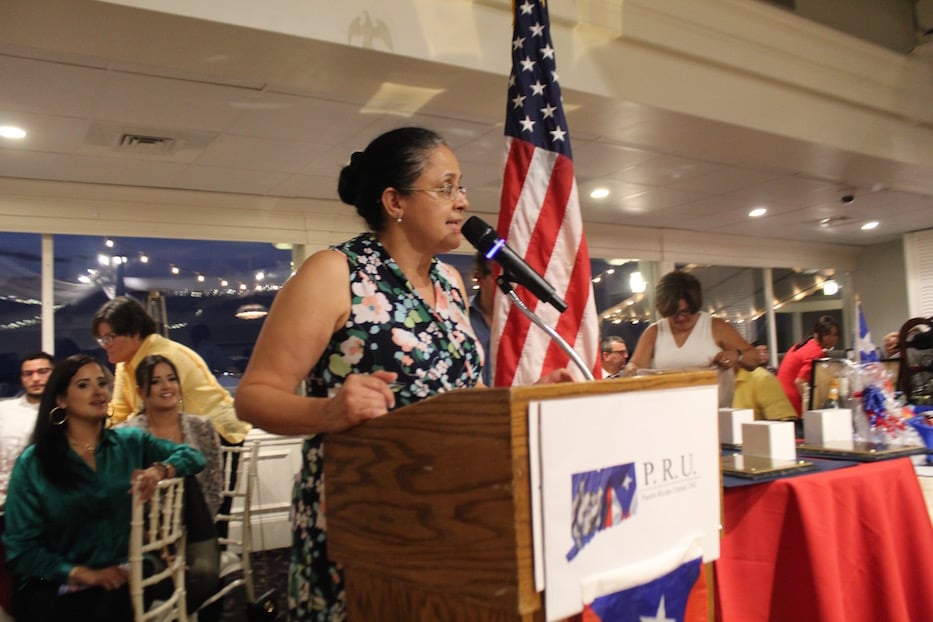 That pride carried through the night’s keynote, delivered by Operation Iraqi Freedom (OIF) Veteran and longtime Connecticut Army National Guard member Col. Lesbia Nieves. Born in Puerto Rico, Nieves moved with her family to Springfield, Mass. when she was just five, and quickly became her parents’ translator because of how quickly she picked up English.

After graduating from high school, her parents didn’t have the resources to help her with college. She realized that the army could be her path to higher education.

“Nada es impossible, nada,” she said to applause. After high school, she pursued that army goal and also fell in love, becoming a wife and then mother to three children. She achieved her goals, she said, by staying focused—and urged attendees to do the same. She said she is led by “core values,” including care, courage, community, and loyalty. 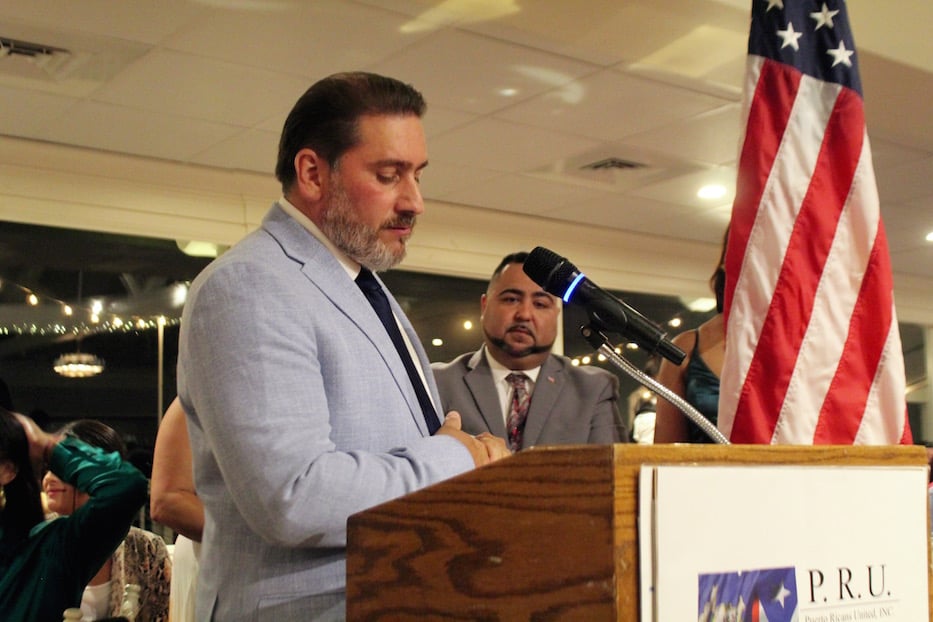 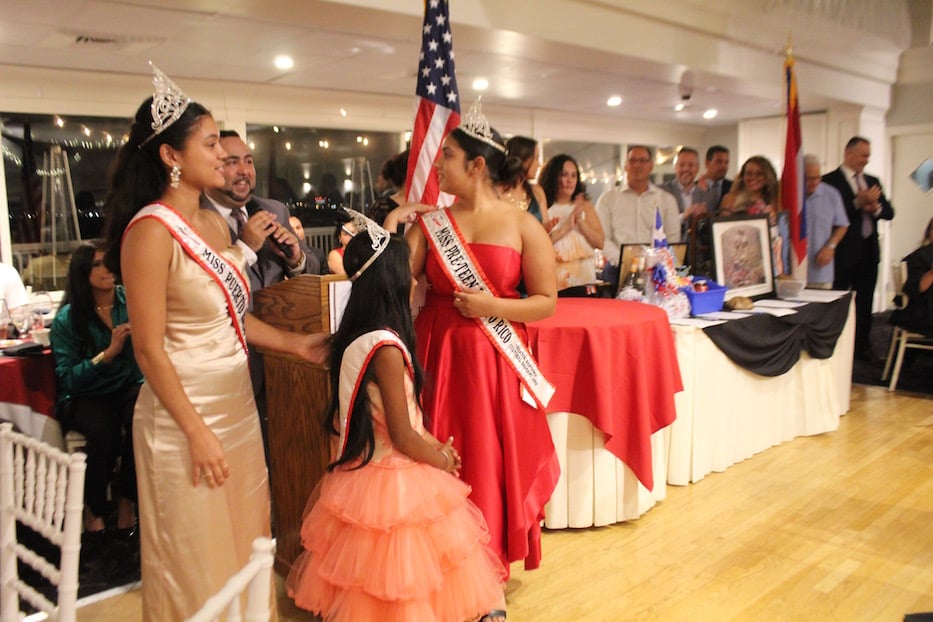 It has often been hard, she said. She remembered arguing with her mother over gender roles when her children were small, and her husband handled some of the diaper changes. When she was in combat and feared that her life was on the line, “I used to tell myself, ‘I want to be a grandma,’” she said, switching off between English and Spanish as she spoke over frequent applause. She encouraged attendees to find faith in their work and their families.

After hours of applause, Amarante’s staff cleared the floor for dancing, and the party wound late into the night. The tradition continues in August, as the group’s annual, day-long Festival Puertorriqueño returns to the New Haven Green. Last year, PRU held a scaled-down festival in Criscuolo Park, in hopes of stemming the spread of Covid-19.

Rodriguez said that planning has taken place in close consultation with both the New Haven Health Department and the Centers for Disease Control and Prevention (CDC) guidelines.