Lots Of Fish Takes The Sound School Under The Sea 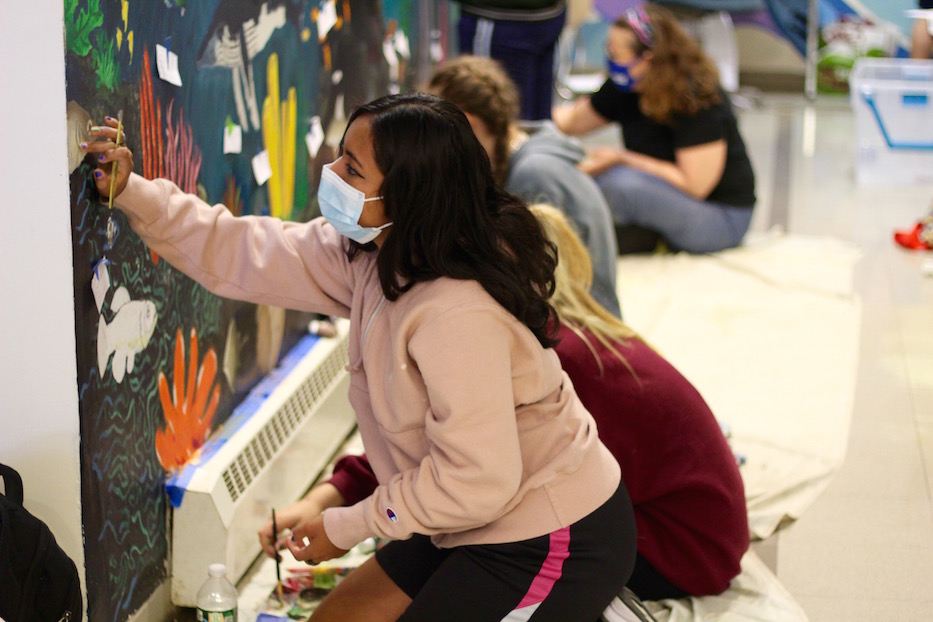 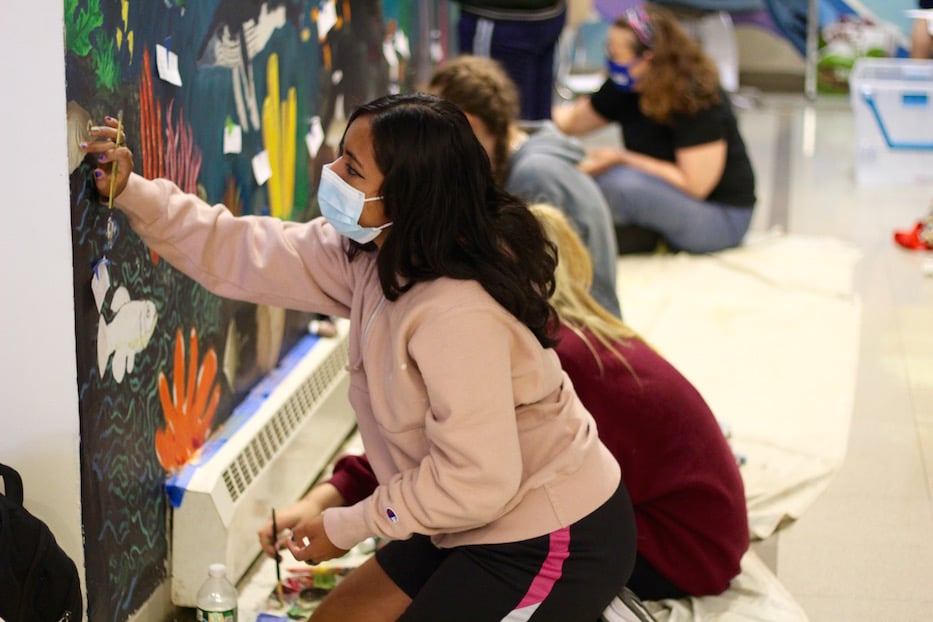 Kristina Sandoval and Madison Hushion compared notes on a gray-green hake, studying its thin gills, huge beady eyes and open mouth as it materialized on the wall. Hushion dipped her brush into a quarter-sized dot of white paint, rounding out the soft-bodied skate she’d been working on. Further down the wall, an orange seahorse floated happily beside a longfin mako shark, a silver-finned porgy and a scup.

The tableau has become a normal one at the Sound School, where Lots of Fish has set up camp with a mix of volunteers and students in the city’s Youth @ Work program. Inside the school’s Thomas Building, students are working with the eco-arts nonprofit to clean up and expand murals and bulletin boards before the academic year begins.

All of the works will live with texts and interactive QR codes on a student-built website. A total of 25 youth are expected to work on the project, which is supported by New Haven’s $6.3 million “summer reset” focused on using federal Covid-19 relief for youth programming. 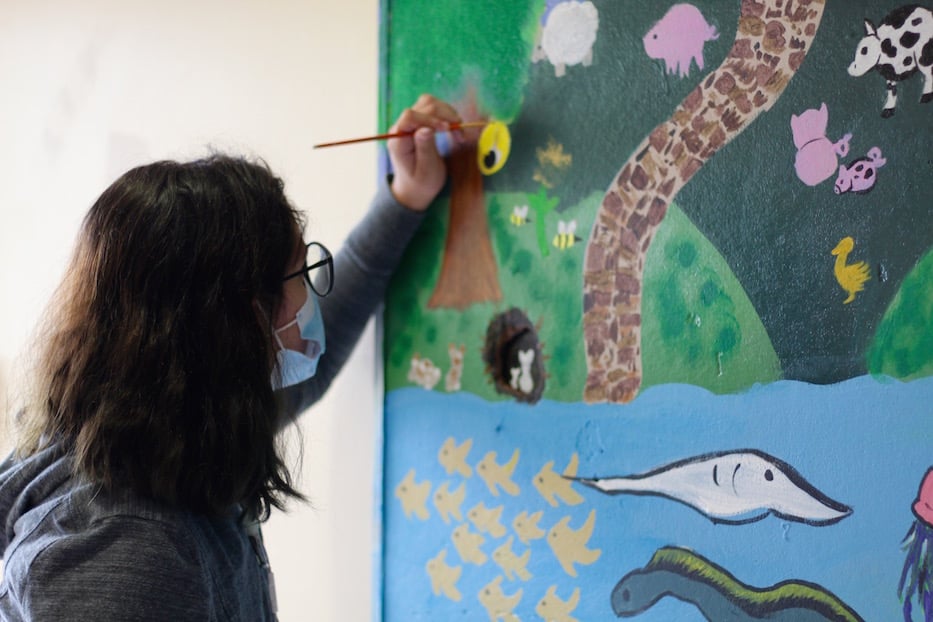 “We get this chance to give back to the school that some of us have been going to for four years now,” said Keila Arce, who will be a senior at the Sound School this fall. “Students are going to come back and see that this work is here.”

Thursday morning, students bounced around the building’s lobby, picking up brushes as walls and bulletin boards filled with rose and peach-colored coral, thick green moss, rolling hills and at least two dozen species of fish. At one end of a long wall, Sandoval and Hushion crouched as they filled in their designs. They are both rising sophomores in the agriculture track at the Sound School.

For Hushion, the mural represents a chance to teach fellow students and their families about the importance of watershed protection and preservation, and the realities of climate change in New Haven and across the globe. She and Sandoval first bonded in middle school over their shared love for the environment. Now, they spend time together cleaning up litter on the beach by the school. Hushion said that she is often stunned to hear people deny or minimize climate change as the American West burns and parts of Europe and China flood.

“It is very important to talk about it,” Hushion said. “It all comes back around to us, and so I think the stupidest thing you can do is ignore it.” 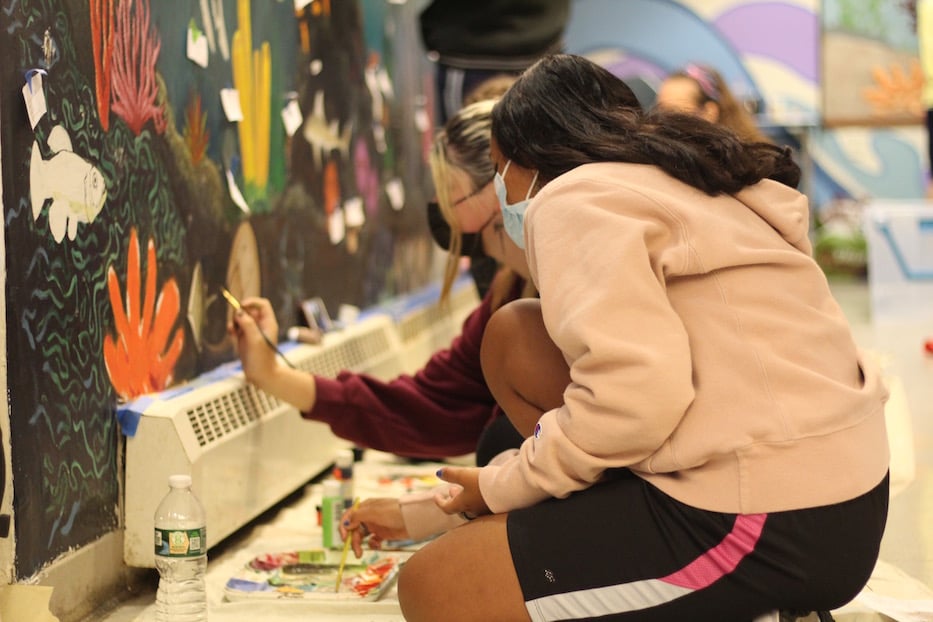 In the past months, the two have found dozens of nip bottles, plastic bags, at least one empty milk carton, and hundreds of medical masks floating in the water and washed up on the shore. As she worked on the painting of a hake, Sandoval said that she’s noticed how “filthy and dirty” the waterfront—and the water itself—gets as the temperatures warm up and pollution levels rise.

When Hushion saw the opportunity with Lots of Fish, she asked Sandoval to come along. Both see it as a chance to help New Haveners increase their environmental literacy.

“I do a lot of like, explaining” when people ask her about climate change, Hushion said. “You want a person to understand.”

Around them, fish seemed to multiply by the minute. On a table at the center of the room, pamphlets with glossy accordion folds showed off fish that might appear in the Long Island Sound, from the American Shad to the oily Atlantic Menhaden that local fishers often use as bait, and fellow fish use as food. 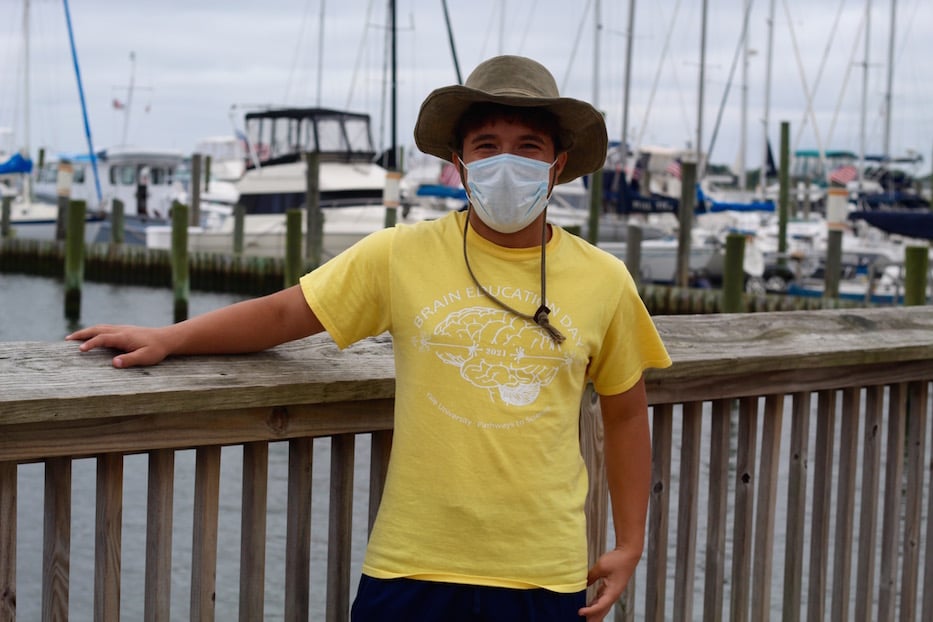 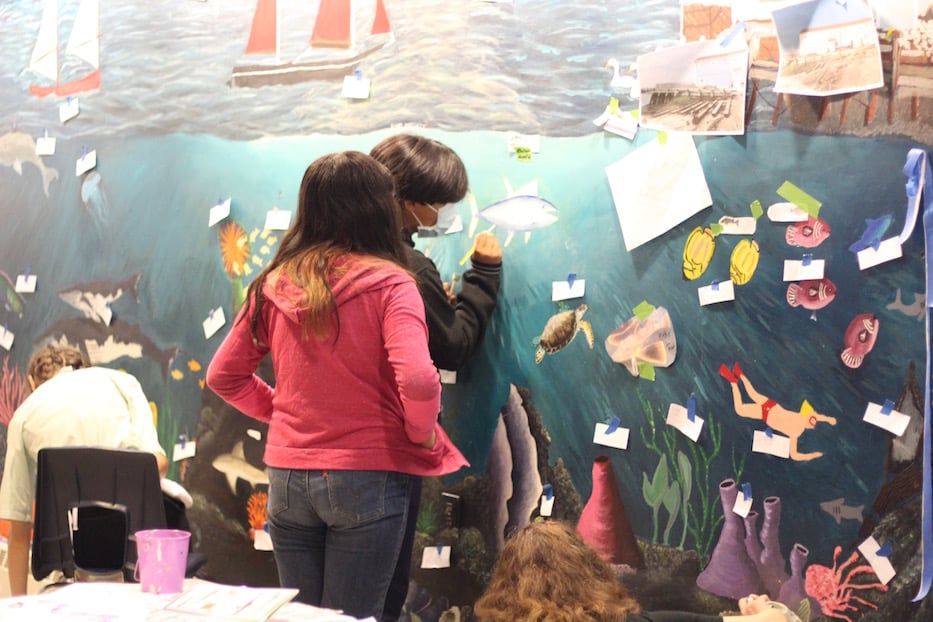 Top: George Marrero. Bottom: Siblings Natalie and Chelsea Calle. Natalie said that they enjoy the mural because of their love for animals, which extends to two fishtanks at home.

George Marrero, a rising sophomore at the school, stepped outside to look at the water under a low-hanging gray sky. He pointed out bluefish and menhaden jumping among the docked sailboats. He has spotted hundreds swimming in the Sound near the school. Nearby, there are also hundreds that have washed up on the shores of the Mill and Quinnipiac Rivers, worrying both him and many of his teachers.

Back inside, he touched up a furry white patch of ​​Northern Star Coral and studied a smudge of green taking over a bulletin board. As they paint, all students are expected to claim, label and “register” fish and underwater flora for the website. Jy’Mar McMillan, a rising junior at Achievement First Amistad High School, is cataloguing each for an interactive part of the website. In addition to text, Moran said that some images will include video as well.

By 10 a.m. the Thomas Building was a flurry of activity. Across a paint-splattered bolt of canvas, 8-year-old Genesis Marrero Rosario worked on a painting of fish that will soon hang in Street’s Boathouse Smokeouse, the Front Street eatery outside of which students spent a summer painting two years ago. Across the room, her mom Maria Teresa Rosario worked on translating the website into Spanish. 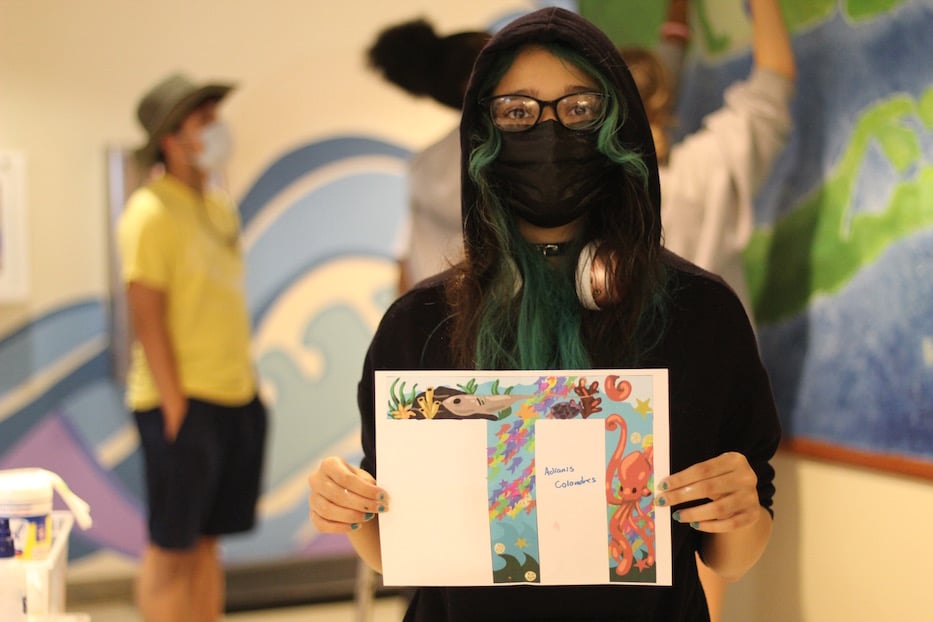 In an alcove nearby, rising Sound School seniors Adianis Colondres and Keila Arce studied a bulletin board, planning out their next move with paintbrushes in hand. Rolling, animal-dotted green hills rose on both sides, a trail cutting through the tall grass. In the water below, a school of small yellow fish passed an eel and kept going. The two artists chose to feature a mix of crabs, lobster, clams, mussels and oysters that clean the water as they grow. Two fisherman in floppy hats and overalls navigated slowly on the S.S. Bessie, named for a friendly milk cow.

Arce, who finished her junior year remotely, said it was exciting to be back in the building after almost two years away. In that time, she has seen her teachers and classmates only through a screen. Through her artwork this month, she has started to imagine what it will be like to return to the aquaculture lab and the open water, where students go boating with their teachers.

“Ever since I was young, I’ve been aware that our ecosystem is dying,” she said. “We need to preserve it, show them [fellow students] where we get our clean water, our food. It’s a teaching tool for younger kids, showing that we need to take care of it.” 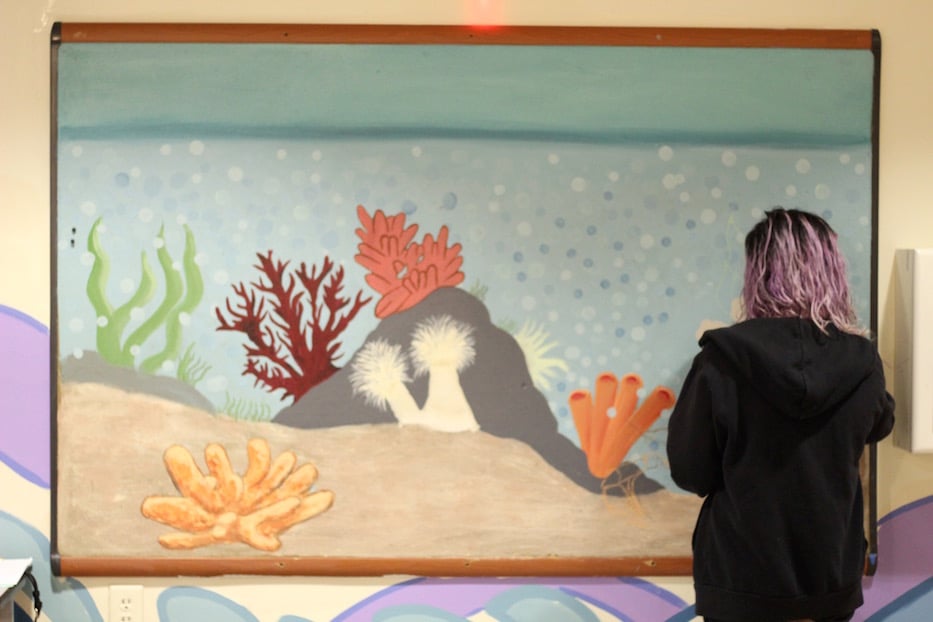 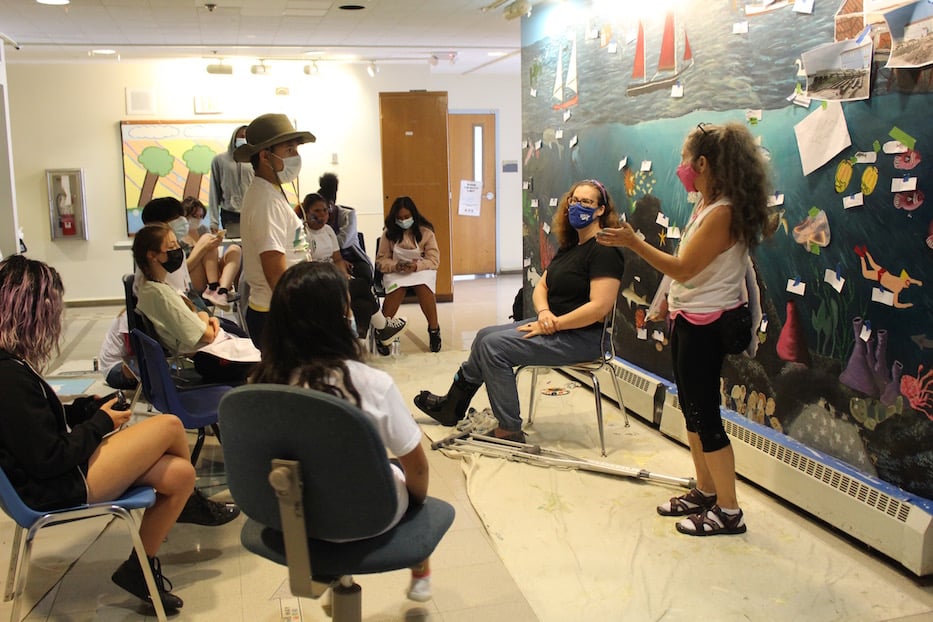 Top: Natalie Leonffu, a student at CalArts who is home for the summer, works on a coral-centered bulletin board. Bottom: Jensen talks to students.

Moran has also turned the summer program into a rotating door for environmental educators, grown up science geeks, and artist-activists. Kattie Leonffu, an artist-turned-science teacher at Clinton Avenue School, is working on a pollinator mural in Fair Haven that she hopes students can help with next week. Educators from Save The Sound have come for outdoor tours and talks.

On site, students are collaborating with Gather New Haven’s Schooner Summer Camp to beautify a swing set structure that has lost some of its materials during the pandemic. While the mural brightens the school inside, a design from Colondres will breathe life back into the set. Thursday, she proudly held up a rendering covered in bright images of marine creatures swimming through clean, clear blue water. A school of multicolored fish sailed past branched yellow Montipora coral.

Thursday, Fair Havener Jennifer Jensen pulled up a seat as students gathered around her. A professor of philosophy at Housatonic Community College, Jensen said she is interested in how environmental justice dovetails with ethics. She asked the young artists if they had ever heard the term. No hands went up. 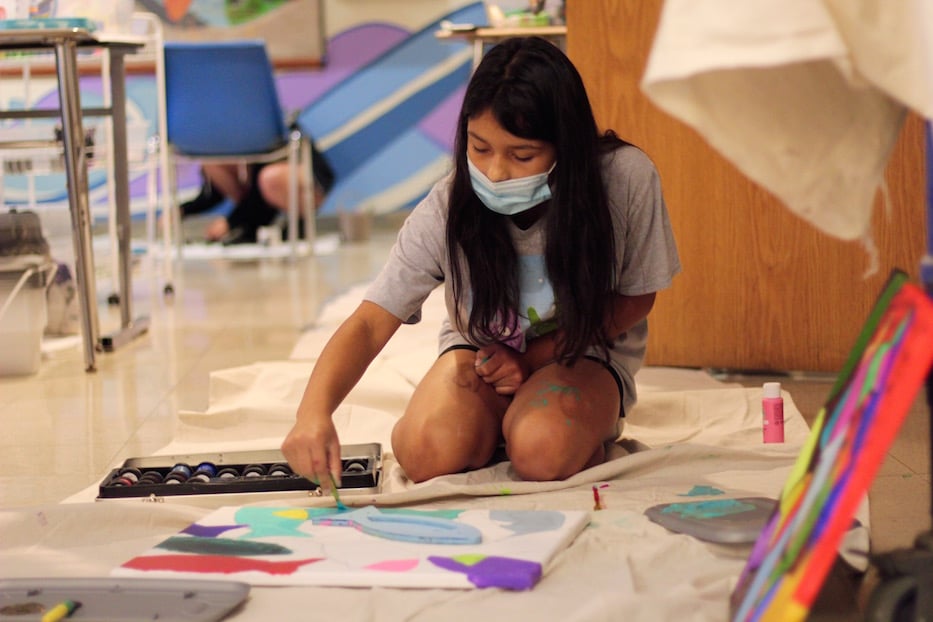 “Environmental justice is so important because it has to do with people,” she said. Behind her, the prehistoric-looking stargazer that she had painted looked out with huge, round eyes. An orange and pink sunrise exploded over the mural.

She explained that with the rise of industry over a century ago, hundreds of oil refineries, garbage dumps, factories and coal-burning plants landed disproportionately in Black and Latinx neighborhoods. More often than not, she said, “it’s a perfect example of systemic racism”—white legislators don’t want something in their part of the city or region, and no one shows up to advocate for other city residents.

“What we’re left with is that we’ve got to clean up this mess,” she said. “It’s fighting for everybody to have the same clean air, the same clean water.”

She asked students what they might add to a canvas on environmental justice—which they’ll be painting for the school’s foyer this and next week. At first, the group was quiet. Then Sofia Lamberty piped up. A rising sophomore at the Sound School, Lamberty lives in the Hill and has seen some of New Haven’s environmental racism firsthand. After her time at the Sound School, she hopes to study law in college. 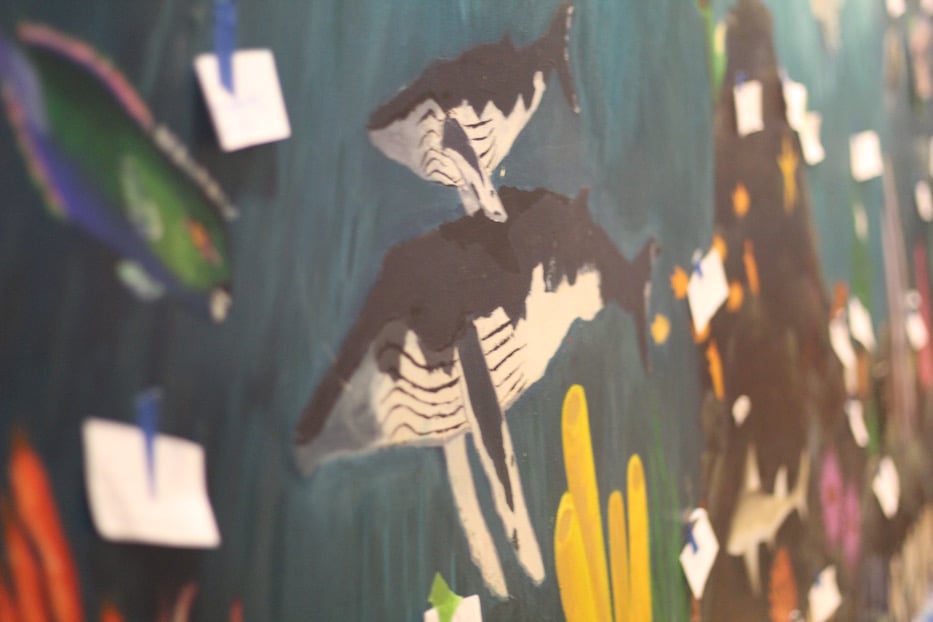 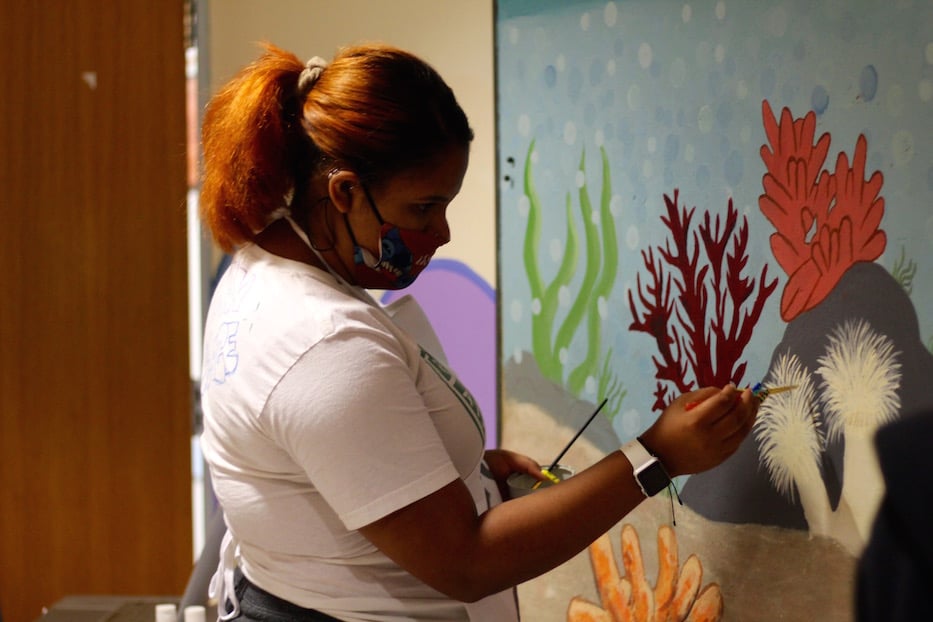 Top: A detail of the mural. Bottom: Sofia Lamberty, a rising sophomore at the Sound School who lives in the Hill.

“Marches!” she said, later adding grocery stores, greenhouses and community gardens to the list. “They do that a lot downtown.”

“Podcasts?” ventured Natalie Calle, who had come with their younger sister Chelsea.

“You could do a program at school for kids,” Lamberty jumped back in.

Sound School Principal Marc Potocsky, who started his tenure in the midst of the pandemic, said he is thrilled to have the artwork filling the school as another academic year begins. Born and raised in New Haven, Potocsky now propagates coral in the basement of his North Branford home. He pointed to the importance of student work in a town where much of the public art comes from artists who don’t live in the community.

“Working at the Sound School is a dream of mine,” he said. “Everybody’s been saying, ‘This year must have been so hard.’ But it doesn't really feel like work when you're that passionate about it.”