Lots Of Fish Swims Into Newhallville 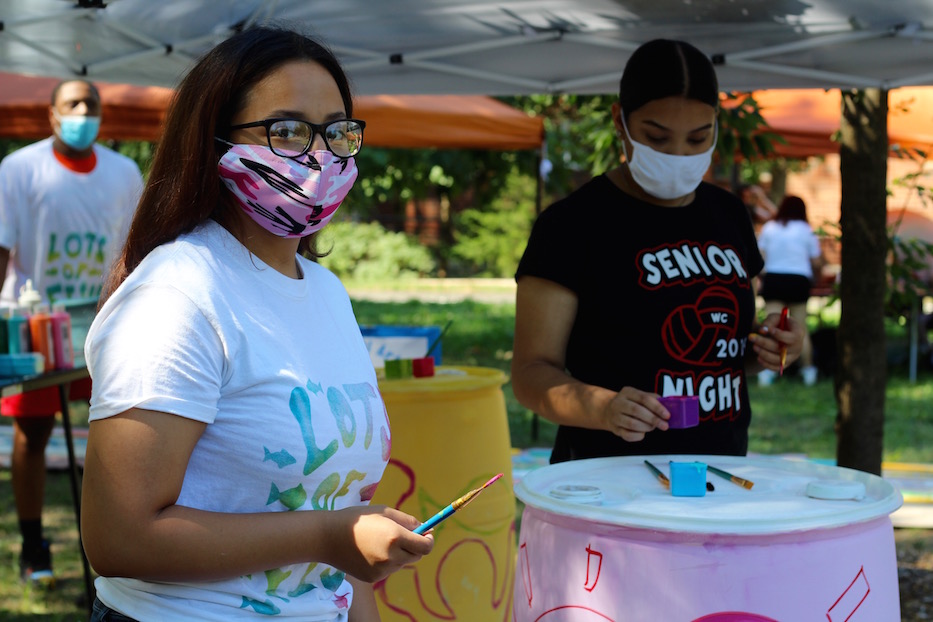 The angular, thick-edged orange figures were the most visible from the road. Beside them, a series of hearts looked out from a matching pink barrel. A school of smiling purple fish swam up a banner nearby. Feet away, a table was covered with boxes of colored pencils and black-and-white printouts with marine shapes.

The scene is a normal one for Lots Of Fish, as the eco-arts nonprofit employs teens through the city’s Youth@Work program for the second summer in a row. Over four weeks, six students are working with the organization to paint storm drain murals, decorate rain barrels, and design crosswalk art in West River, Newhallville, Fair Haven and Quinnipiac Meadows.

Tuesday marked a special "Herring"-themed tribute to the artist Keith Haring, who became known for his pop-art graffiti before his death in 1990. Students-turned-employees painted in Haring's signature style to match an information kiosk that sits at Hazel Street and Shelton Avenue.

“It makes such a difference, just being able to come out and do something for summer,” said Assata Johnson, a rising junior at Hill Regional Career High School who is part of the program. “It’s really important to me that we do this work, and care for our environment. We have this one earth.” 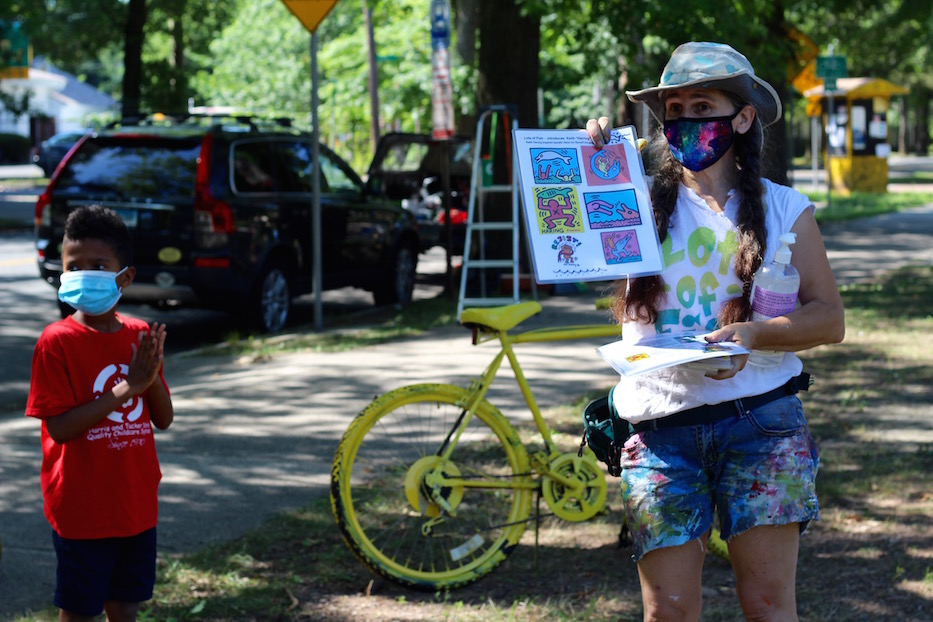 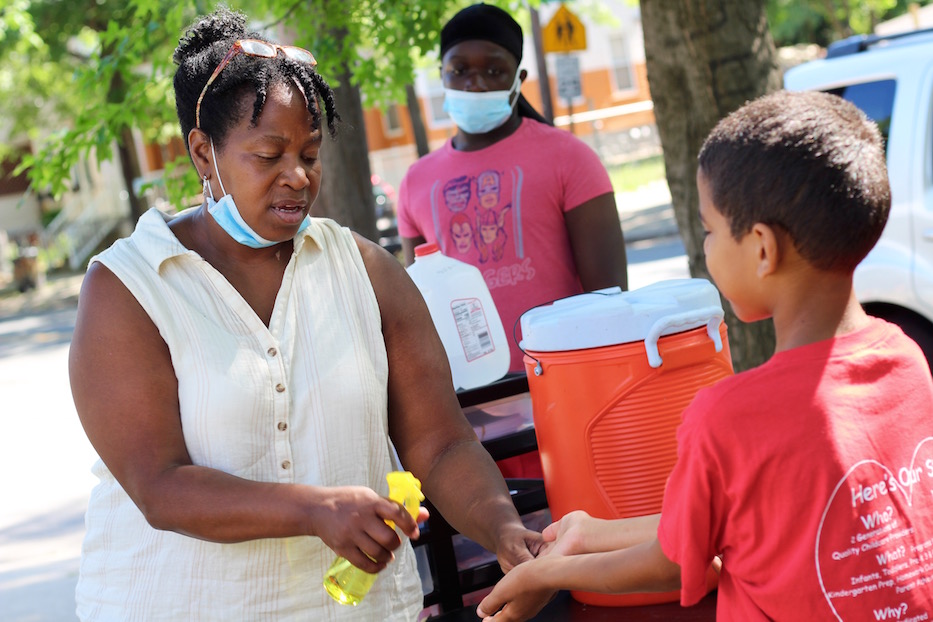 After starting the month in Edgewood/West River, students migrated to the Newhallville Learning Corridor and nearby “Bike The Vote” mural on the Farmington Canal Heritage Trail, where a guerrilla artist has added graffiti of Warner Bros.' characters Road Runner and Speedy Gonzales. Because of COVID-19, all work is outdoors and incorporates mask wearing and social distancing. The program is supported by Sustainable CT, New Haven Bioregional Group, the Fair Haven and Quinnipiac East Community Management Teams, the Greater New Haven Coalition for People and various city departments.

This year, projects are geared towards storm drain art, rainwater collection, and environmental education across the city. Artist JoAnn Moran, who runs the program, is focused on the same goal she’s always had: less litter, more knowledge, and thousands of healthy fish in the Long Island Sound and surrounding waterways. It’s why “only rain in the drain” and “what goes in the ground goes in the Sound” are two of her favorite mantras.

Tuesday, students began the day early, laying down tarps and setting up tents as the heat index passed 85 degrees and kept going. Several filled neat containers of paint, arranged clean brushes, and set out rain barrels as they waited for partners from the Community Placemaking and Engagement Network (CPEN) and Harris & Tucker School. They flipped open the group’s Twitter, Instagram and TikTok, doing a quick inventory of videos that had already been uploaded and social media duties for the day.

Around them, the grassy section of trail once known as the Mudhole sprang to life. Where a lonely turtle sculpture usually sits alone, blue tents rose up with rain barrels, two long banners, and an evolving design for a storm drain. Moran buzzed from station to station, checking tarps like a mother hen. 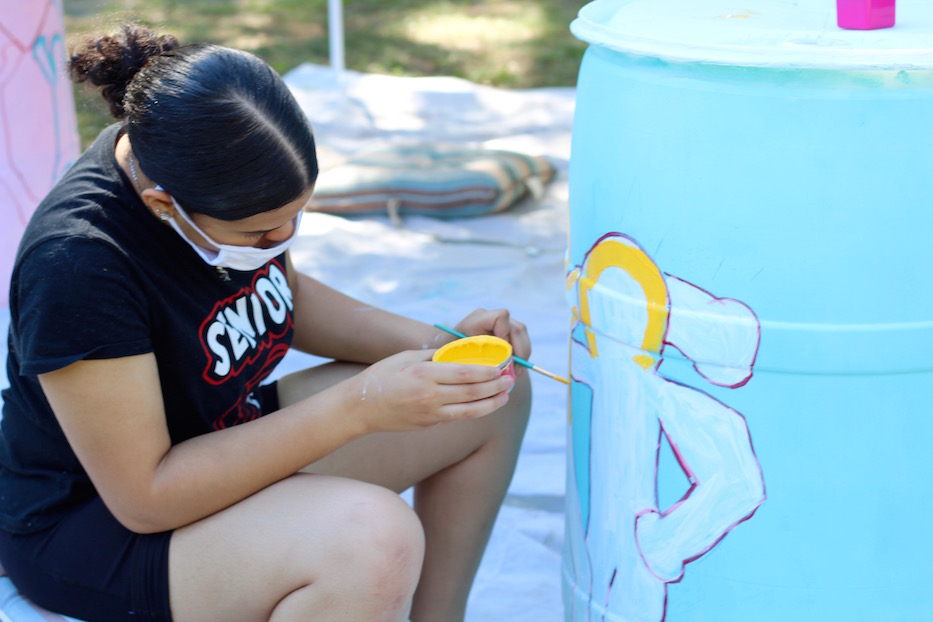 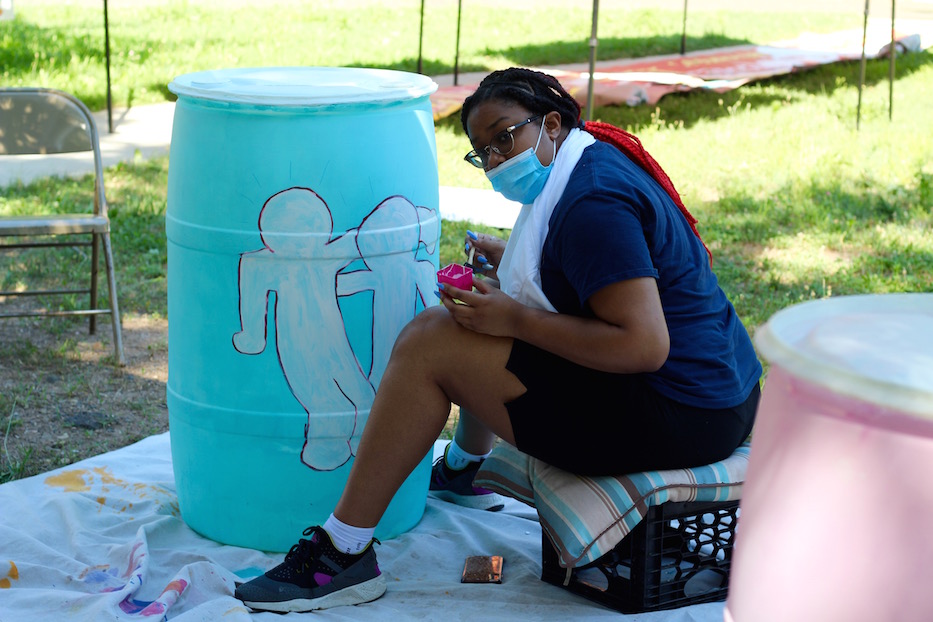 Trinity Ford, a rising sophomore at Cooperative Arts & Humanities High School, praised the program for getting her out of the house after a semester of COVID-19 quarantine and distance learning. Before schools closed in March, she spent time painting after-school with classmates at Co-Op. She said she’s grateful to be able to do it again, with a group of new friends.

“Really, it just keeps me motivated,” she said. “I find the act of painting soothing. The best part is meeting new people.”

Fellow employee Yahayra Llacxaguanga agreed. A rising junior at the Sound School, Llacxaguanga entered high school thinking about the preservation of marine life. As a freshman, her goal was to work with marine mammals. Now, she is interested in becoming a social worker. She said that the past months have been trying for her—and that Lots Of Fish gives her a place to escape, while being kind to the planet.

“I like the fact that we can bring awareness to this through art,” she said as she painted a nearby barrel pink. When they are done, the barrels will collect stormwater runoff through their connection to a building’s gutter system. In New Haven, they are supplied for free through the Water Pollution Control Authority (WPCA).

As they worked, young students from Harris & Tucker filed in, a sudden symphony of tied and re-tied masks and hands rubbed vigorously with pumps of clear hand sanitizer. A volunteer from Lots Of Fish did temperature checks, whipping out a thermometer and waving it from forehead to forehead. Under one tent, a group of students wrote out their names, then started sketching out marine mammals and storm drain art.

“I like drawing because you get to be creative, and you can draw anything you like,” said 7-year-old Layla Colon, a rising second grader at Amistad Academy. She picked out a sharpened blue pencil; soon a storm had materialized on her page, with clear blue water and purple and orange fish swimming inside.

“I think we should let the fish stay strong and healthy, so we have to keep the oceans clean,” she continued as she colored in a purple fish. “If you throw a plastic bag in the ocean, or in the drain, it hurts the fish.” 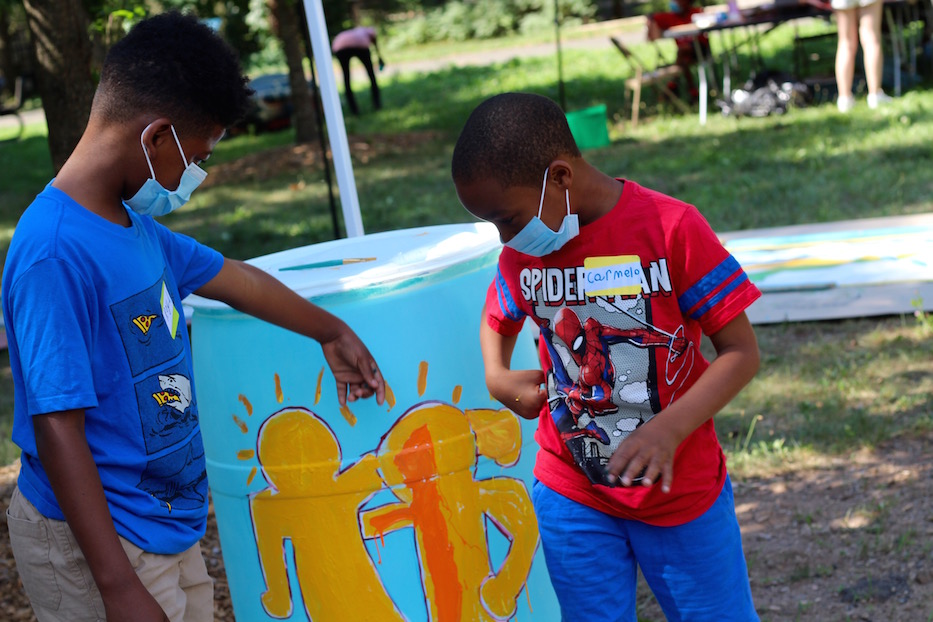 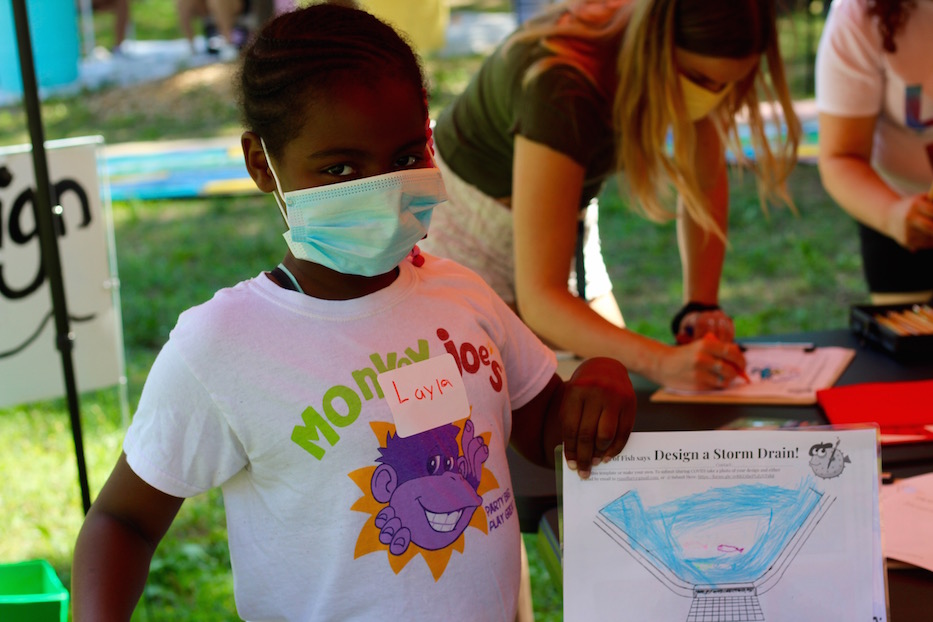 Part of the program is meant to educate through art: youth learn about storm drains as they paint, and then pass that knowledge on to their peers. As New Haven faces increased flooding and high winds, litter gets swept into storm drains, sometimes carried miles by rainwater. Any detritus that makes it into storm drains washes right into the Long Island Sound, where it has the potential to kill fish and poison the water.

New Haven also has a combined sewer system—meaning that raw sewage may join litter, cigarette butt toxins, and microplastics in the state’s waterways when the sewer system is beyond capacity. That happened earlier this month, when two million gallons of sewage spilled into the Mill River after a corroded pipe collapsed.

At a rain barrel station, students Ray J. Byfield and Carmelo Myers puzzled over two blocky orange figures spreading out their arms. Carmelo, who is eight, said he was most excited about the colors, a sort of deep nectarine. Ray, who is 10, politely disagreed: he loved thinking about the barrel’s impact on the environment.

Maliyah Brown, a 9-year-old Edgewood School student, said she was drawn to the project because she paints everyday at home. She gravitated toward a pink rain barrel that matched her pink shortalls and pink shirt, starting in on a punchy heart shape.

As they worked, Johnson flipped on a playlist that started with Megan Thee Stallion’s “Savage” then flowed into Doja Cat and Nicki Minaj. Jordan Wabahati, a rising junior at Wilbur Cross High School, grooved along as he rearranged containers of paint. The beat started in his shoulders and worked its way down his arms. Throughout the program, Wabahati has been choreographing and posting the group’s TikTok routines.

“It’s really fun,” he said of the program. “You get to learn about the environment, and make new friends. The best part is the people.” 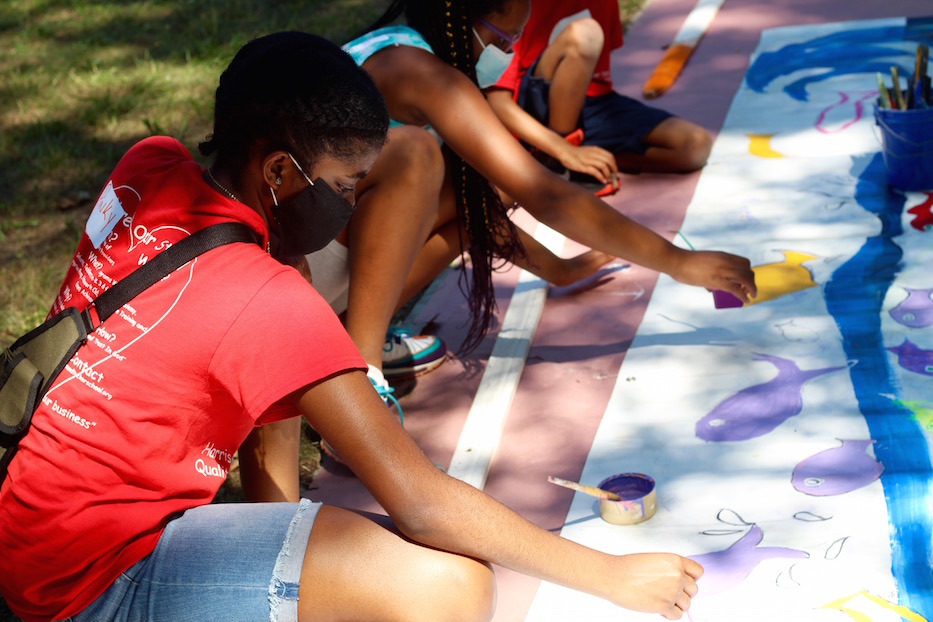 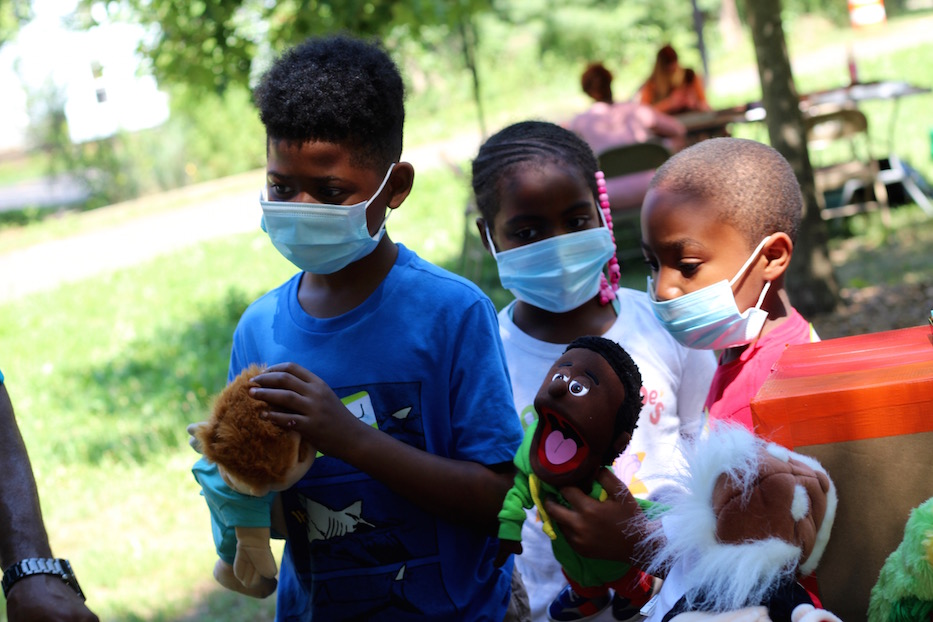 On the perimeter of the action, Joseph Inigo set up a keyboard and collection of puppets, all members of the New Haven-based Music Note Club. The group is meant to teach students about writing, presentation, ecology and the environment. No sooner had he finished the display than students, suddenly on their lunch break, reached over and started playing with the toys.

Doreen Abubakar, who leads CPEN, said inviting the group felt natural. Their gentle presence is part of a rotating door of events on the corridor, from Thursday afternoon trail cleanup to Saturday morning pancake breakfasts and diabetes-focused walking groups.

“I was excited that they had this project,” she said.

Beyond her, students had started a puppet show. Peals of laughter filled the corridor. The theme from Titanic started playing from the keyboard. It felt like summer, masks and all.