Need A Booster? Try The Library. 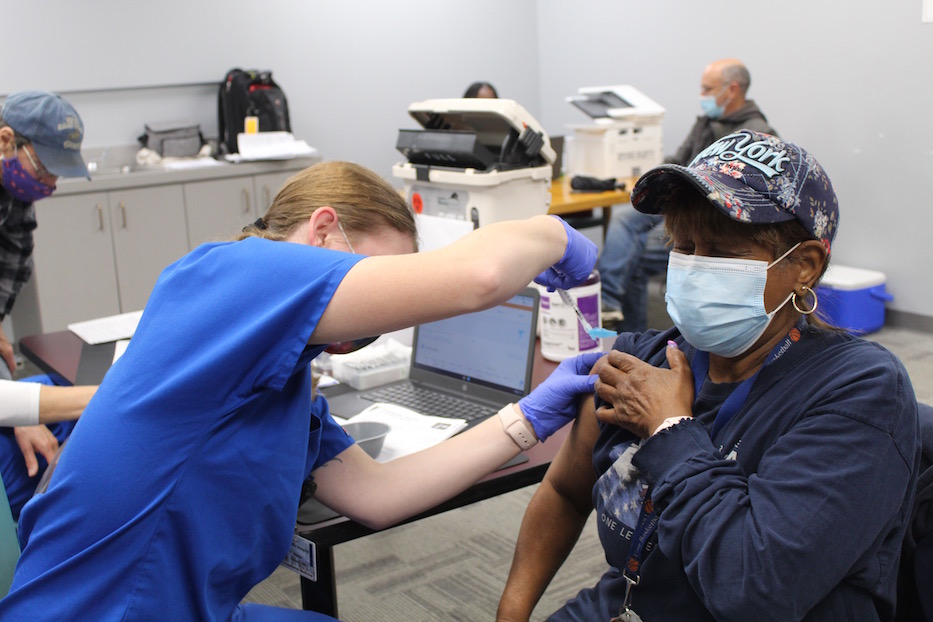 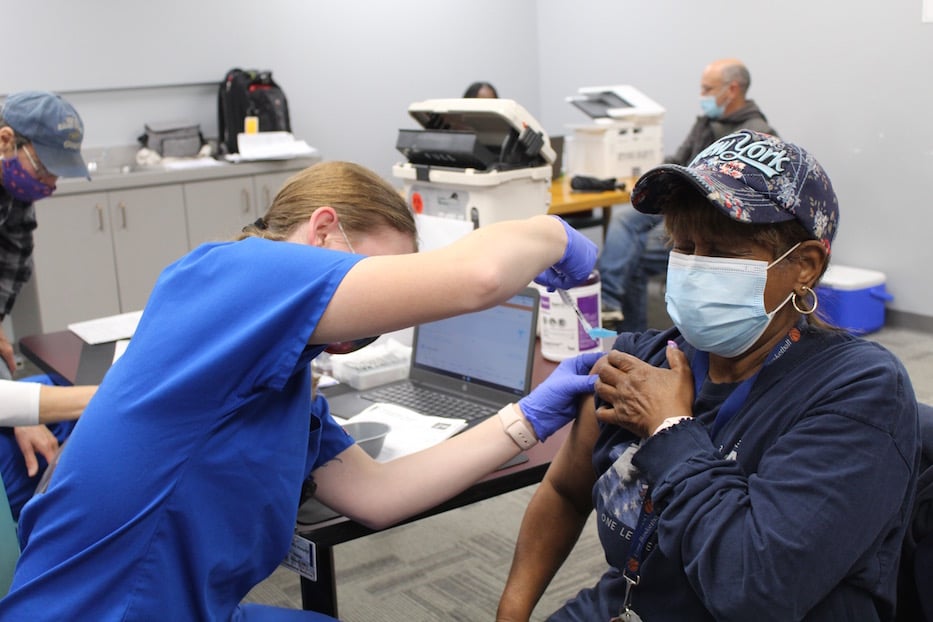 Carmen Shortt usually comes to the downtown library to pick up books. Friday morning, she closed her eyes, rolled up one sleeve, and picked up a Moderna booster shot instead.

With the stacks as her backdrop, Shortt joined a handful of New Haveners at a new Covid-19 vaccination and booster clinic in the basement of the New Haven Free Public Library (NHFPL), where after-school programming has been replaced with syringes, medical masks, neatly printed vaccine cards and nurses in vests and blue scrubs. It is run by Griffin Health, which for months operated out of tents on the New Haven Green.

Friday, over a dozen people braved the rain to attend the clinic, which replaces Griffin's outdoor spot. It is not the first time the library has become a hub for vaccines: the Hill-based Wilson Branch partnered with the Cornell Scott Hill Health Center for months earlier this year, helping to vaccinate thousands of New Haveners.

“I like the library because I feel comfortable here,” said Shortt, who moved to New Haven earlier this year to be closer to her sister, longtime library champion and former NHFPL Foundation Board President Elsie Chapman. “Everything they do is for the community.”

Representatives from Griffin Health will be in the space Monday through Saturday from 10 a.m. to 4 p.m. through the end of the year (for holidays and closures, check the NHFPL’s calendar). Anna, a Griffin Health nurse who asked that only her first name be used, said that it made sense to move inside as the weather grows colder and wetter. As if on cue, the sky opened up outside, drenching passers-by on Elm Street and the Green. 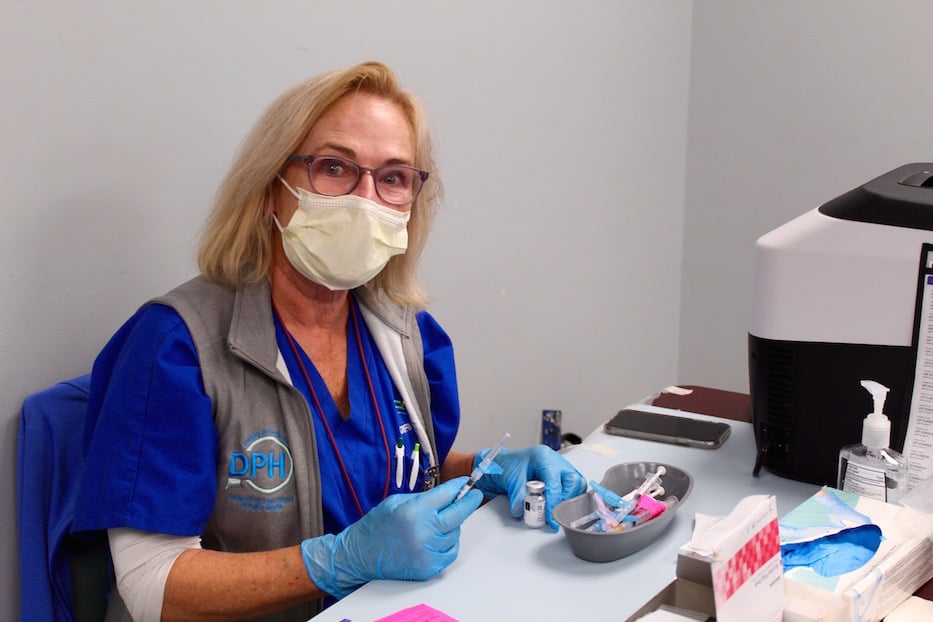 Around her, the clinic buzzed with activity. At one side of the room, Site Supervisor Suzanne Standish assembled neat, bean-shaped dishes of syringes, alcohol swabs, and band-aids, calling out “did he want Pfizer?” or “what is she getting?” every few minutes. As a line formed outside the library’s Think Tank, a fellow Griffin Health nurse passed out color-coded clipboards and pens. By the door, people traded vaccination stories as they waited excitedly to get jabbed.

Shortt said she was relieved to receive her booster shot after getting her initial Moderna vaccines in February and March of this year. In the spring, she moved from New York to be closer to Chapman and to her daughter, the sculptor Yvonnne Shortt, who has a residency in New Haven. Even after boosters were cleared by the Centers for Disease Control and Prevention, she had trouble booking an appointment.

Friday, she and Chapman decided to get their shots together. When asked if she was excited, Shortt's eyes glimmered behind her glasses and crinkled at the edges.

“Absolutely! Absolutely!” she said. “Are you kidding? I was like, why has it taken me so long to get this?”

She added that the location was an added perk: she sees the NHFPL as a hub for community members, where librarians and other staff members look out for the health and wellbeing of the people who walk through the door. When Shortt arrived in New Haven, Chapman took her to get a library card. She now likes to sit and read in the space, which she described as much more than a large home for books. There are trusted messengers work among the bookshelves and steady click of desktop mice and keyboards in the downstairs computer lab. 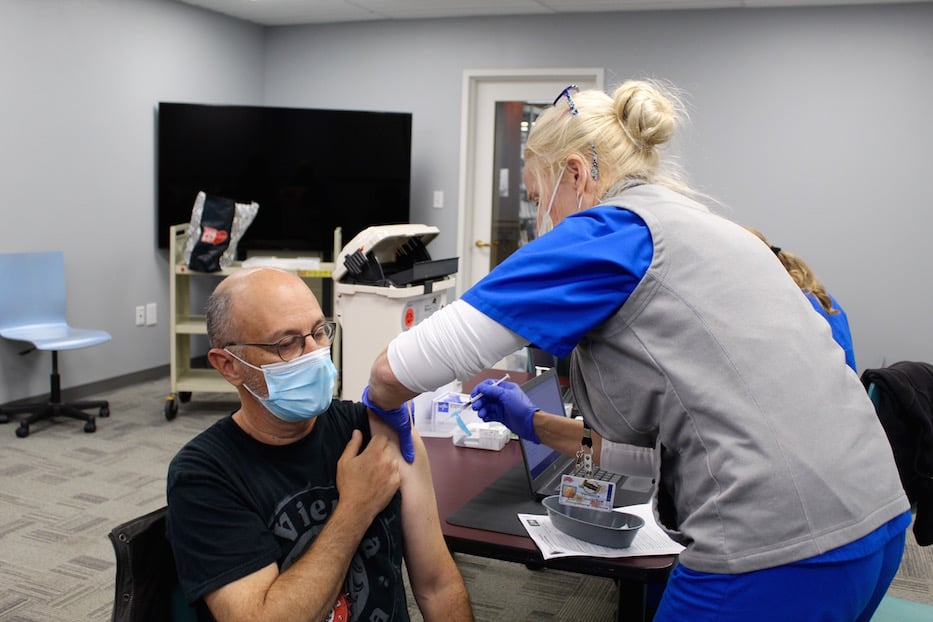 As Shortt found a seat for her 15-minute wait, videographer Jay Miles slid into a vaccination station beside Veronica, a second Griffin Health nurse who asked that only her first name be used. After receiving the two-dose Moderna shot in March and April, Miles noticed that more clients were requiring full vaccination as they rolled back into filmmaking. He was grateful to be among the freshly jabbed, he said.

As a teacher and a professional artist, he’s often in tight, cramped spaces with actors and fellow tech people, masked up and shoulder-to-shoulder for hours at a time. Before teaching a two-week intensive at Mitchell College in New London next month, “I don’t want to be anything but max vaxxed,” he said.

Like Shortt, he was also tickled by the location. Born in the town of Muskegon, Mich. and raised in Washington D.C., Miles grew up around libraries. When he was a young kid, Muskegon’s public library captured his imagination with its sweeping nineteenth-century stonework, vaulted ceiling and spiral staircases. His mom, who passed away last year, bought its enchantment to life. He’s never forgotten what it felt like to step into that building.

“It’s this magical place when you’re four years old,” he said. As he got older, he found that libraries never stopped being magical. After moving to New Haven in the 1990s—musical brothers Steve and Johnny Rodgers receive the credit for that decision—the library became one of his favorite haunts. He had a “big surge of library life” when he released a book in 2011, and relied heavily on the library’s curbside pick up program last year, as New Haven emerged cautiously from quarantine. The downtown and Fair Haven Branch Library have helped get him through the pandemic, he said.

Anna hustled past him as he lowered his mask for just a second to take a sip of water. "Did your arm fall off yet?" she joked, smiling behind her mask. Miles laughed.

Griffin Health's vaccine and booster clinic operates Monday through Saturday, 10 a.m. to 4 p.m. out of the Think Tank on the lower level of the Ives Main Library. It will be there through the end of the year. Visit the NHFPL's website for more information.