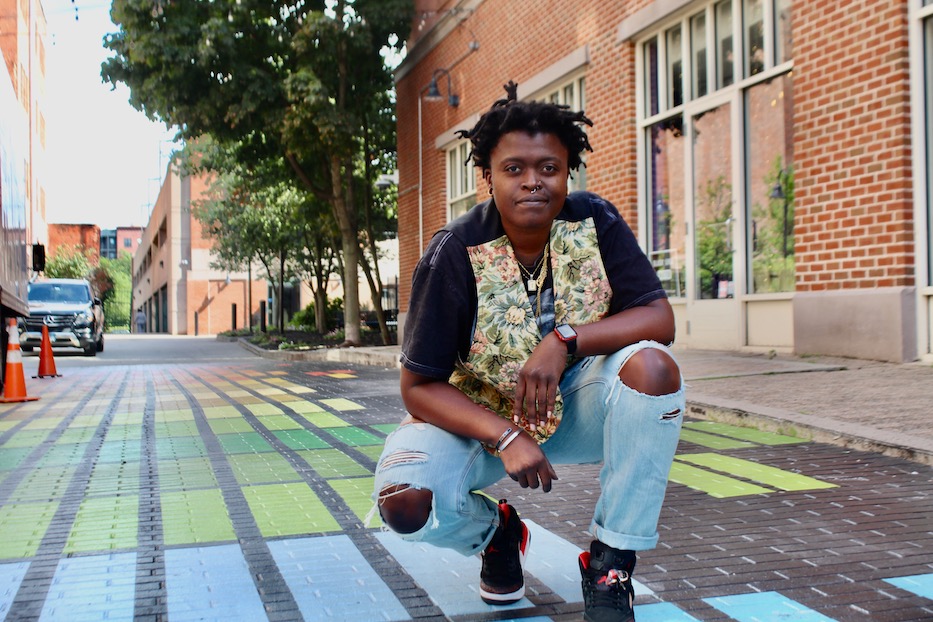 The artist in the Ninth Square on a recent Wednesday. Lucy Gellman Photos.

From the sidewalk, the bright, flat blocks of color are enough to stop a walker in their tracks, inviting them in to take a closer look. They stretch back across the alleyway, neatly arranged in rows as if viewed through a prism. If a person stays for a while, they can walk and weave among them, the shapes caught somewhere between hopscotch, stenciling and glitch art.

Welcome to EQ or Equalization, a new mural from artist Candyce “Marsh” John that sits beside the juncture of Orange and Center Streets in a wide brick alleyway that runs between two apartment buildings. Painted in the punishing heat of July and August, the work is both an homage to the 1990s and a bright call to come together, despite the differences that viewers may have.

This year, it comes during a period of explosive growth for Marsh, a multimedia artist and tattoo virtuoso who worked with longtime collaborator Jesse Wolf to complete the piece. It is supported by Straight Up Art, an initiative of the Town Green Special Services District that brought public art to the Ninth Square and downtown since its birth in 2020. The name is a reference to audio mixing, and the process by which a frequency can be smoothed out to work alongside other sounds.

“I wanted something nostalgic that was also something that would bring us all together,” she said on a recent Wednesday afternoon, looking over the sea of colorful, even rectangles on sun-drenched black brick. “All of us could be a different color, and if we work together, blend together and respect each other, look at the beauty we could create.”

Like much of her art, EQ reaches most immediately back into her childhood. The artist, who turns 35 this month, grew up in the 1980s and 1990s in New Haven, surrounded by a rapidly transforming technological landscape. In her first decade of life, computers jumped from Windows 1.0 and the first dot-com domains to Windows 95 and the first-ever Google searches. She became a teenager at the same time the dot-com bubble was bursting.

Her young life, like the lives of so many millennials, was inextricably tied with the rise of machines and widespread use of the internet in the mainstream. As a kid, Marsh was fascinated by early screensavers (remember these?) and gaming systems. “We had all of them,” she said with a smile—and playing was often how she connected with her stepfather at home.

By the time she was a young adult, she was downloading music, navigating a noisy dial-up connection, and burning CDs. As she got older, she held onto that delight, always aware of the graphic imprint it left on her mind and her craft.

Years later, that translates to the mural. There’s something very Pac-Man and Tetris-like about the design, as if a viewer might hop from one block of color to another, and in so doing advance to another level. Instead of an old-school, nostalgia-drenched soundtrack of bleeps and bloops, there’s the intermittent rumble of cars and sound of footfalls. On one side of the mural, Elm City Games’ first floor retail space means that there’s a steady stream of people in the area at any given time.

It also marks a new chapter for her work. In her apartment just over the Hamden town line, portraits of Black and Brown icons and personal heroes sidle up next to her “Marshun Minis,” tiny, delicate and often faceless renderings with crowns hovering over their heads. Almost always, her canvases have a figurative, free-flowing style that is instantly recognizable as hers.

EQ, by comparison, is restrained—although no less joyful in its use of color across a formerly peach-toned and drab brick walkway. Using tape to create stencil shapes, she and Wolf worked methodically in the thickest heat of the summer, putting down multiple coats of color as the brick absorbed the paint almost as quickly. That the rectangles seem to dance in place is deliberate, meant to reflect “that bounce of life,” she said.

“It feels good,” she said. “It’s cool to be doing something for my city.”

The work is also part of a year in which Marsh has been able to grow her footprint as a public artist. In 2020, she worked with Wolf and artist Carlos Perez to paint a Black Lives Matter mural on Temple Street, and soon found that “that was the kickstarter” for her career. In the months and then years that followed, she started landing commissions after years as a multimedia artist. Or in her words, “my name is being mentioned in the right rooms.”

In the last eight months, she has completed murals for the Connecticut Department of Children and Families, NuSpiral Collective, RiseUP Group and Hamden Youth Services Bureau. The second, located on upper Whalley Avenue, shows a young Black boy looking through a magnifying glass as people play on the field around him. Beside him, sound erupts from a stereo system. A fruit tree stretches its thick, healthy trunk towards the sky.

During her time working on the piece with Wolf, a woman came by, studied the design and wept.

“I kind of thought about what it would look like for the average Black kid to feel free,” Marsh said, adding that she wants to keep the same vision going with EQ and future pieces across the city. “I always say, I do it for the people. I want the city to feel bright”

In a phone interview last week, Town Green Special Projects Coordinator Tara Von Schmidt said she is thrilled to have a Marsh original in the Ninth Square, tucked just two blocks down from Chapel Street and a short walk from the New Haven Green. She added that the decision was not hers alone: a panel of artists and Ninth Square merchants chose the design from several entries earlier this year.

Working downtown, she often admires the Black Lives Matter mural that stretches across Temple Street, and has gotten to know the artist’s work during her time in New Haven. She noted how different the mural is from FUNQEST’s large scale, cacophonous mural Welcome To New Haven at 278 Orange St., which is also supported by Straight Up Art.

“We wanted excellence, local talent, a diversity of voices and Marsh just excelled in all of those categories,” she said. “As a born and raised New Havener, we felt that it was a really important voice to uplift.”