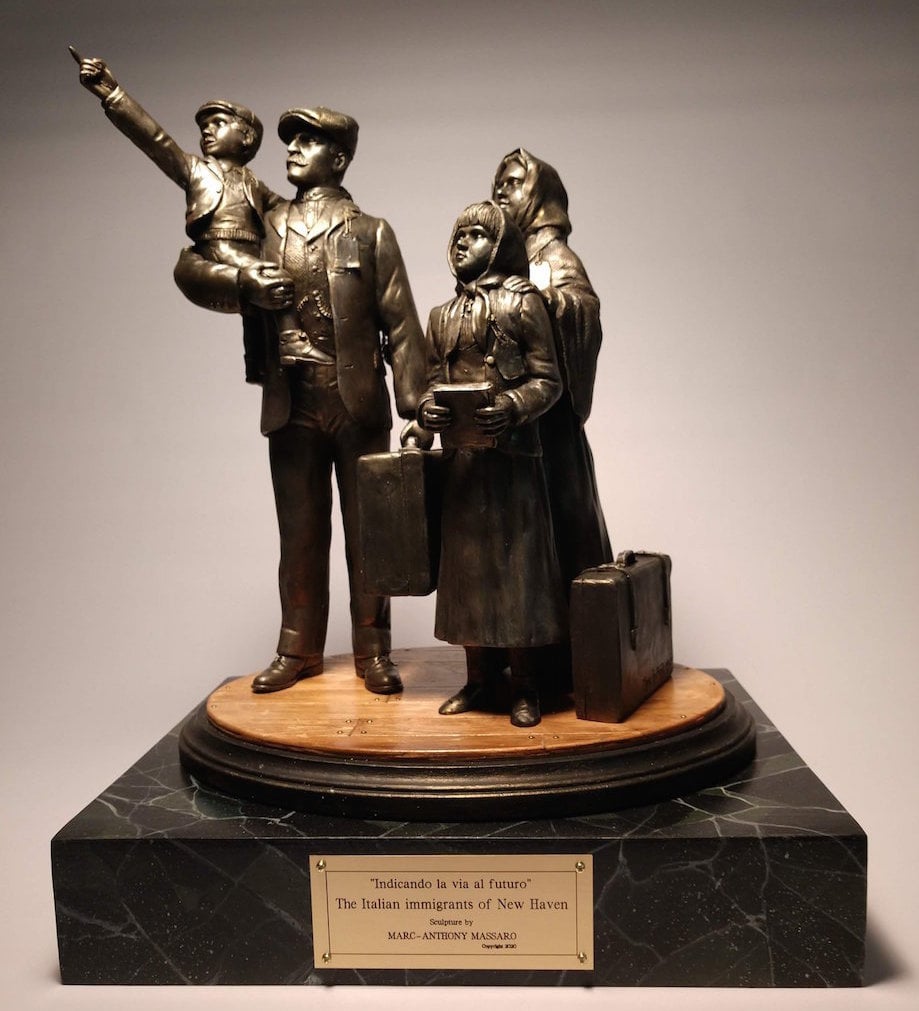 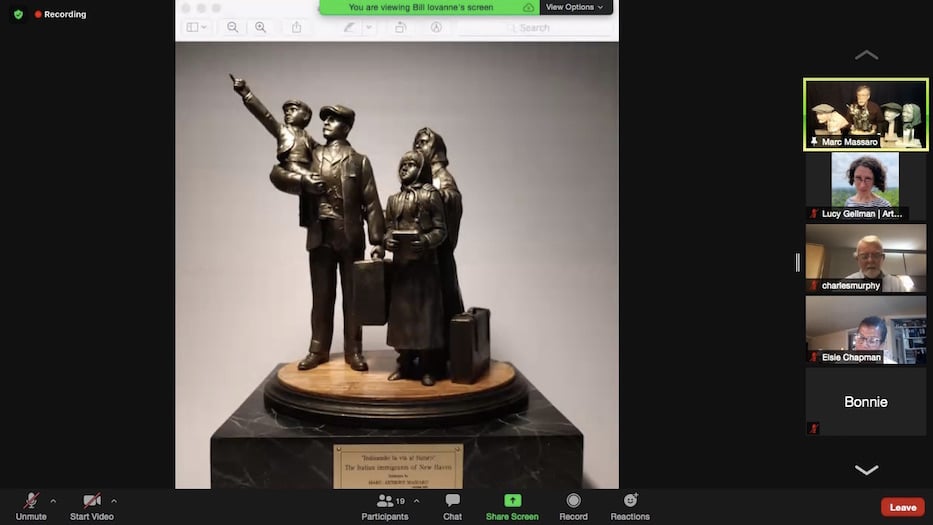 Massaro first presented Indicando la via al futuro (Pointing the Way to the Future) in the July 15 meeting. Screenshot from Zoom.

First there were hundreds of proposals. Then there were six. Now, a single design has won out to tell the story of Italian immigration to New Haven.

Wednesday night, members of the Wooster Square Monument Committee voted overwhelmingly to support Marc-Anthony Massaro’s Indicando la via al futuro (Pointing the Way to the Future) to replace the statue of Christopher Columbus that came down last June. Massaro’s sculpture features an Italian immigrant family of four as they arrive in the United States. The artist grew up in Wooster Square and now runs a studio in Branford.

A few dozen attended the meeting on Zoom. The vote follows a July 15 meeting in which six finalists pitched designs for the site, which sits at the Chapel Street entrance to Wooster Square and must integrate the historic stone pedestal on which Columbus stood. The committee’s subgroup has since narrowed that selection down to three.

Read more about the committee's process here, here, here and here and get their official language around the work here. 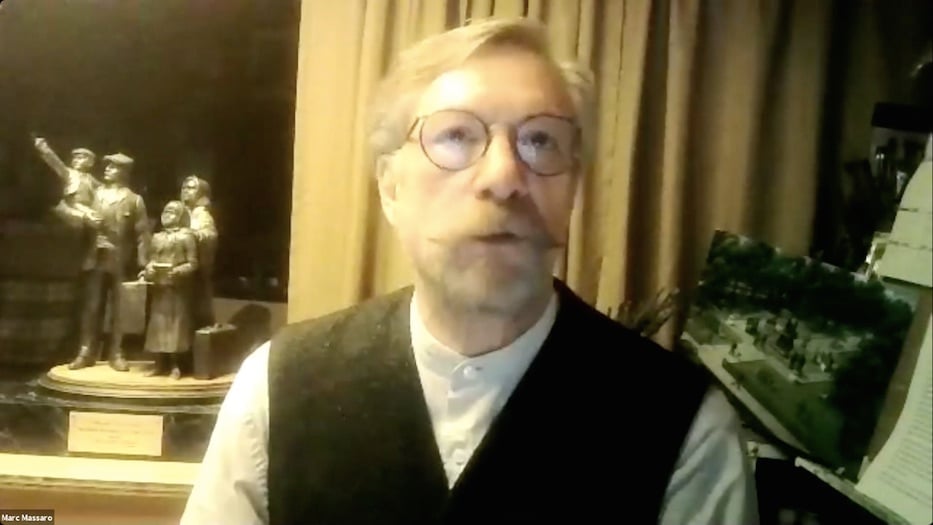 While the committee comprises 27 members, city employees cannot vote; two voting members did not show up. Rich Ramadei, who proposed returning and polychroming the Columbus statue on July 15, recused himself from the committee.

“We are just beginning this process,” said Monument Committee Co-Chair Bill Iovanne, Jr., who has remained a steady presence in cacophonic and sometimes divisive meetings. “It is gonna take a little time before the monument is replaced. There is still work that the committee needs to do.”

Massaro’s sculpture, of which he has already cast a miniature in bronze, will depict a family of four arriving in the U.S. from Italy. Titled Indicando la via al futuro, the sculpture shows a father and mother with two young children, all of them looking towards something in the distance. From his father’s arms, the young boy extends one arm and points toward the horizon line. His sister holds a heavy book, which Massaro sees as a symbol of her education in the U.S. 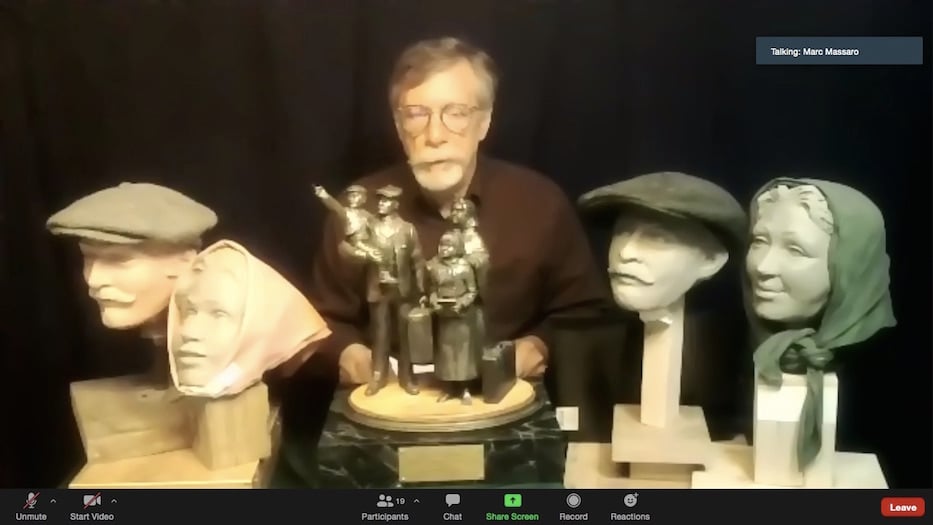 His composition, including the figures’ detailed outfits, is meant to conjure the late nineteenth century. Those years saw a massive spike in Italian immigration to the U.S., according to data from the U.S. Census Bureau. In New Haven, the year 1892 also marked the arrival of the Columbus statue to Wooster Square.

That year, President Benjamin Harrison also announced the first Columbus Day in a desperate effort to win Irish, Italian and Polish votes as he faced off with Grover Cleveland. Harrison lost, but Columbus day stayed as Italians worked their way into the next century, and into whiteness.

“We are looking at the immigrant experience from a century ago, and how this progresses through time to the future,” Massaro said Wednesday. “Tying in with the tight unity that Italian families have regarding their faith, their family values, and all their traditions.”

In an earlier meeting of the committee, Massaro estimated that the project may take up to 18 months to sculpt the work in life size and bring it to a foundry. He plans to use live models in nineteenth-century period dress for the figures, and retain small details including a wedding ring on the mother’s finger, small Catholic cross hanging on the daughter’s neck, and hats based on those his Italian father and grandfather once wore.

He is still working on the design for four double-sided narrative panels, which are meant to tell the story of Italian immigration to and in New Haven. Per the committee's guidelines, those will chronicle the voyage from Italy and arrival to the U.S., choice to settle, work, and worship in Wooster Square, growth of family and community in the neighborhood, and legacies of immigration that exist in an increasingly diverse Wooster Square today. 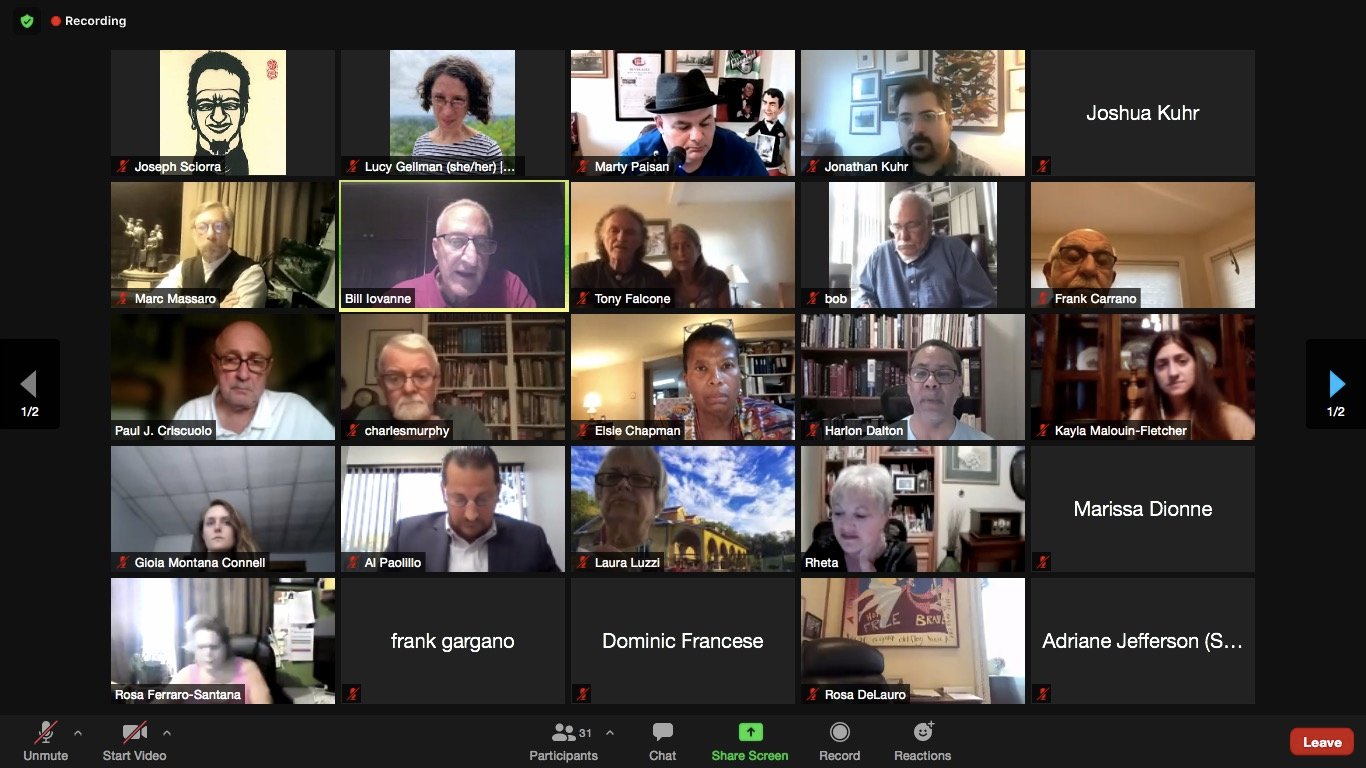 “This public work of art will tell, in its composition, a story of the dreams, persistent, aspirations, hardships and family values established by those in New Haven of Italian ancestry,” Iovanne said. “It will tell the story of hard work, determination, sacrifice, discrimination, family, and faith.”

Over 13 months of meetings, multiple committee members have expressed interest in a sculpture that reflects multiple immigrant experiences, from New Haven’s nineteenth-century waves of Irish, Polish and Italian immigrants to a more recent influx of individuals and families from South and Central America.

As committee member Elsie Chapman pointed out last week, Massaro’s sculpture is fairly specific to a white, heterosexual, cisgendered and Eastern European experience (read more about that here). Neither the design nor the project acknowledge Black or Indigenous Americans, who do not share a history of willing and consensual migration to or within this country. 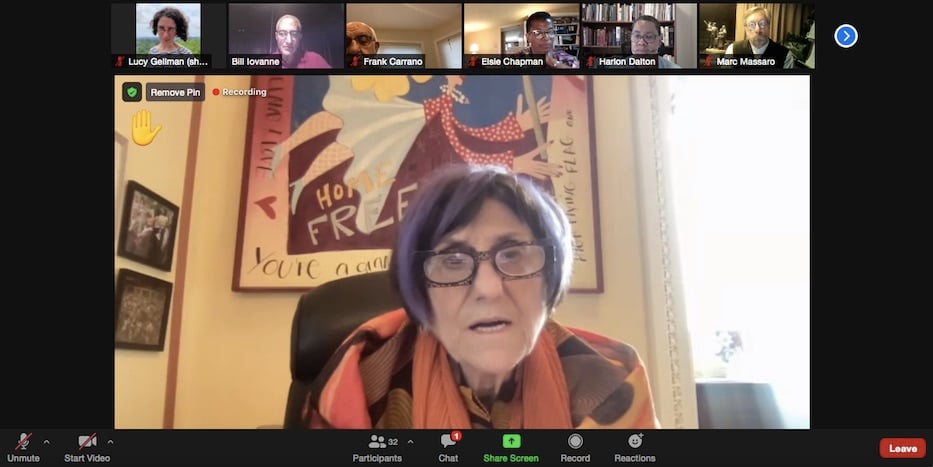 It was, however, a favorite among voting committee members. Bouncing between votes on the monument and and votes on the floor of the U.S. House of Representatives, U.S. Rep. Rosa DeLauro praised the committee’s celebration of and dedication to the immigrant story. She ultimately voted for Massaro’s work as her first choice.

Born and raised in Wooster Square, she still recalls her father’s quest to get Italian taught in the city’s public schools. Her mother Luisa, who passed away in 2017 at the age of 103, spent much of her career working with immigrants and families who were new to New Haven.

“I can’t tell you how much it means to me,” she said, choking up from her D.C. office. “It’s where I come from. And you know, all of us know where we come from and you never, ever can lose sight of where you come from.”

Wednesday, a handful of public attendees also joined to watch the vote. Joseph Sciorra, a scholar and folklorist at the City University of New York, thanked the committee for its effort to collect concepts from the community. In his work, Sciorra has spent years writing on monuments as they are reconsidered, taken down, and in some cases forcibly toppled across the country.

Marty “The Paisan”—he declined to give his full name—urged the committee to integrate pizza into its final design. The radio host was born and raised in East Haven and now lives in Chicago. A Frank Sinatra bobblehead and collection of old New Haven photographs, some printed with the tricolor of the Italian flag, sat on the wall behind him as he spoke.

He told the committee that “the community wants that statue back,” although few, if any, New Haveners have asked publicly for its replacement since the removal. Sinatra’s oversized plastic chin and fedora remained frozen behind him.

Iovanne listened quietly, then explained that the process has sought to engage the greater New Haven community since its inception late last June. Before the end of the meeting, he outlined the committee’s next steps, which will include approval from the Historic District Commission, Cultural Affairs Commission, New Haven Department of Parks & Trees, and finally the city’s full Board of Alders.

Funded entirely by grants and private dollars, it will ultimately be gifted to the City of New Haven—just as its predecessor was 129 years ago.

“We have learned, we have grown, and we are at a point in this process right now where we have an opportunity to tell our story, make a statement, and bring a community together,” he said. “And that is our goal.”