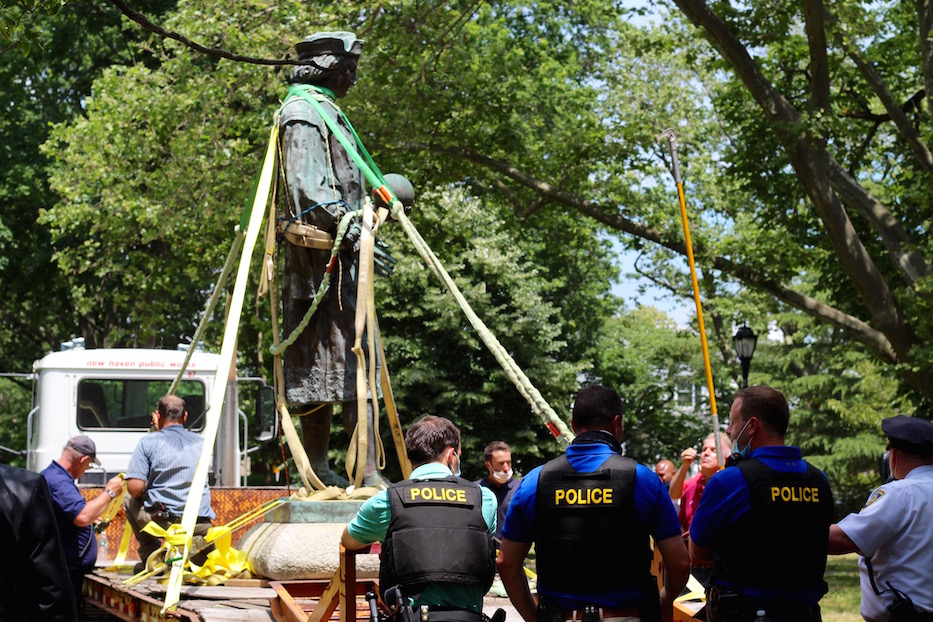 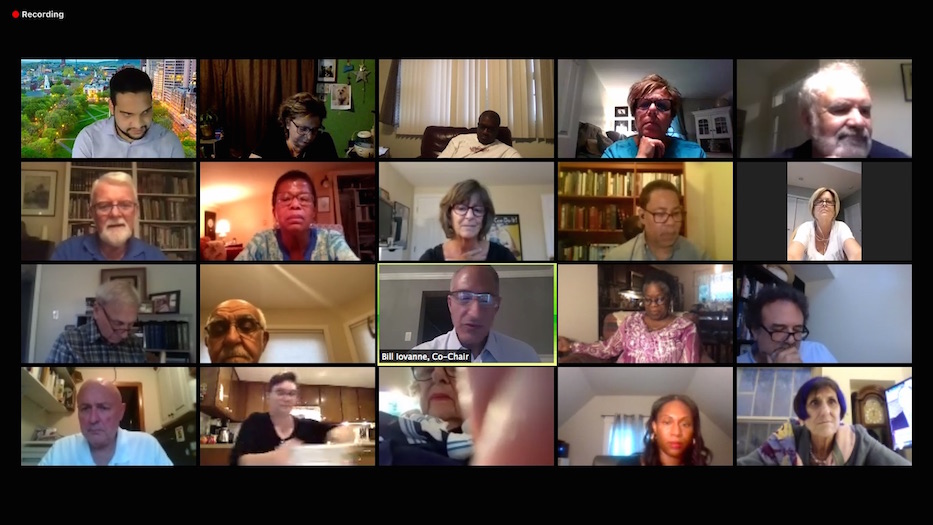 It could look like a garden, with an old stone pedestal in the center. Or criss-crossing pathways that bind past and present as they weave through a corner of the park. Or an homage to immigrant labor, rendered in striking detail. No one knows for sure—because the community has yet to weigh in.

That was the upshot of the Wooster Square Monument Committee meeting Thursday night, as members convened over Zoom to talk about the future of a Christopher Columbus-less Wooster Square. Committee members, appointed by Mayor Justin Elicker in June, have been tasked with deciding who—or what—will replace Columbus. Now they are opening calls for community input.

The statue was removed from Wooster Square Park on June 24. The committee has announced in its guiding principles that the project will be funded entirely by individual donations, rather than public dollars.

Thursday, committee members discussed plans to take suggestions from the community through Oct. 12. Most of the 24 members live, work, or worship in Wooster Square; they also include elected officials and members of the city’s Cultural Affairs Commission and Department of Arts, Culture & Tourism. As they chattered from one-inch boxes, their heads were magnified against home offices, nondescript walls, and bright backdrops.

“We have a rare and exciting opportunity,” said committee co-chair Laura Luzzi. “This process is our opportunity to transcend the moment and to find a way to celebrate and respect each others’ process. We want to hear from everyone who has an opinion and recommendation on this issue. All voices will be respected.”

The committee’s job is to source proposals from the community, vote on a design, work with an artist, and see the project to completion. Thursday, committee Chair Bill Iovanne urged members to keep an open mind about what the monument could be, and what multiple histories it might honor. 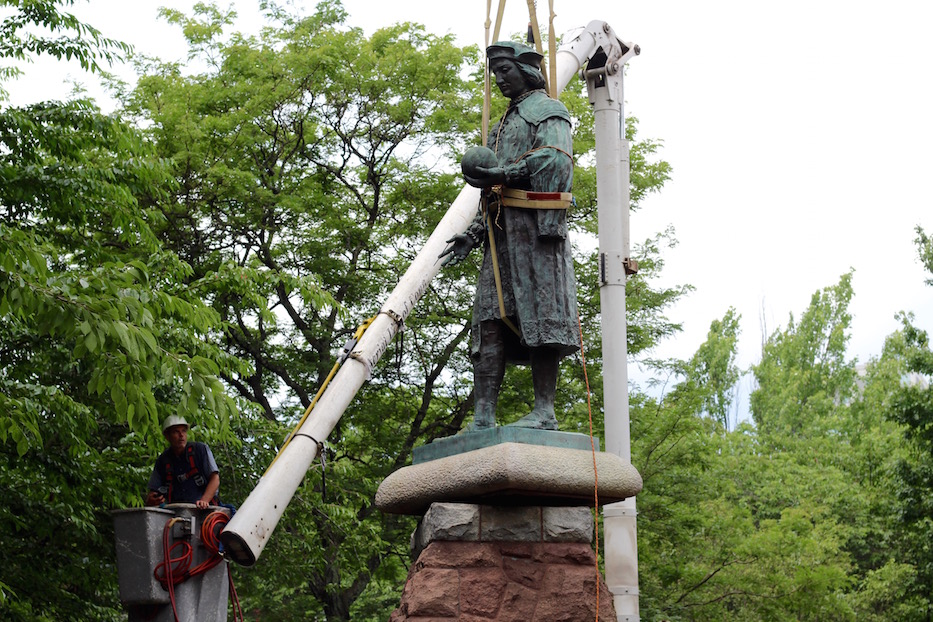 Despite the committee’s name, he added that the term “monument” is a catch-all: the committee is open to just about any work of public art, including a garden, permanent installation, or nonrepresentational piece. For historic preservation purposes, the original pedestal must remain in place. While the statue was originally cast in Massachusetts over a century ago, the pedestal was built by local stonemasons (or as committee member Cindy Rosarbo described them from one corner of the screen, “our ancestors.”)

“In my mind, it could be a connection between the old and the new,” said Frank Carrano, a committee member who helped mobilize and coordinate efforts to bring the statue down earlier this year.

For Iovanne, the story of Italian-American immigration and heritage encompasses overlapping histories of organized labor, industry, small business, neighborhood development, and a shared struggle against xenophobia and stereotype. While dancing around the words “Columbus Day” and any mention of the removal itself, he said that he is ready to hear from the community, and appeared almost crestfallen when no one used the “raise hand” feature of the meeting’s seminar-style format.

Luzzi added that she finds inspiration in the fact that “immigration has been the key to our strength and our success,” a factoid that she does not consider unique to Italian Americans. She pointed to the history of not just scrappy industrial laborers, but also artists, writers, political leaders, and chefs that changed the country's culinary landscape.

It comes at a time when there is momentum among members to move beyond the Columbus mythology for a more holistic look at Italian-American history. Long before the thick smell of wood-fired ovens rolled over Wooster Street, Wooster Square held a mix of Irish residents, free and formerly enslaved Black people, and enough European Jews to justify a synagogue that no longer exists.

In a subcommittee meeting Wednesday, committee member and historian Neil Thomas Proto presented on the history of Italians in the neighborhood, including the fact that they were not always welcome. In the first half of the nineteenth century, a section of the neighborhood was built by William Lanson, the Black engineer also responsible for Long Wharf and sections of the Farmington Canal. Another went by Slineyville, after John Sliney. In 1850, only 3,679 Italians immigrated to the United States, according to data from the U.S. Census Bureau. 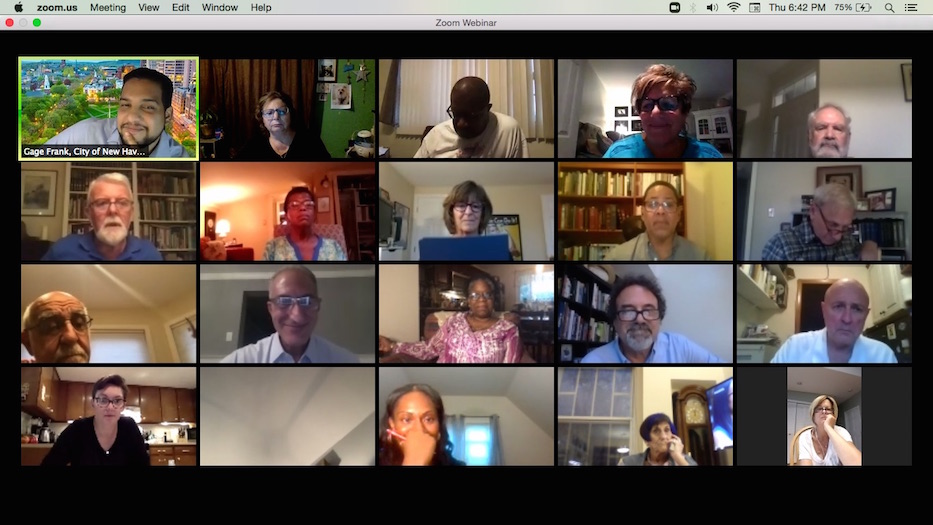 A wave of Italians arrived in the 1870s, drawn in part by the promise of industry that no longer exists in the city or across the U.S. As several pro-Columbus protesters pointed out in June, they too were subject to stereotype and name-calling, including racialized epithets that sought to separate them from white English and Irish immigrants who had come before them. By 1880, 44,230 of the country’s incoming 6,679,943 immigrants were Italian, according to data from the U.S. Census Bureau. By the following decade, that number had more than doubled.

When the statue was erected in 1892—the 400-year anniversary of Columbus’ maiden voyage—Italians were on their way to becoming white. The year before, a group of 11 Italian men was lynched in New Orleans, an act of carnage for which the city made a public apology only last year. By comparison, Southern States have yet to publicly apologize for slavery, and New Haven has yet to apologize for the cotton gin. Both cost thousands of enslaved Black people their lives.

The holiday wasn’t a gesture of his boundless magnanimity. Harrison was up for reelection against Grover Cleveland, and wanted to mend the beyond-splintered relationship between America and the Italian immigrants it had grudgingly accepted and then subjugated.

It didn’t work for Harrison— Cleveland went on to crush him that November—but it did a lot to move a celebratory Italian-American narrative forward. Harrison died eight years later, just after the beginning of the twentieth century. Columbus day lived on for over a century. By 1920, Italian immigrants outnumbered Irish entrants to the United States for the first time, at 1,610,113 to 1,037,234. In 1930, that number was 1,790,429 to 744,810.

In Wooster Square, the statue became a stand-in for that history, even as once-proud residents moved out of the city to the whiter, wealthier suburbs that surrounded it. The sculpture was recast in bronze in 1955; a memorial plaque was added in 1992. It survived urban renewal, during which several Wooster Square residents lost their homes as Interstate 91 sliced through the neighborhood.

Thursday, committee members did not weigh in on public calls for the monument to reflect Black and Indigenous narratives, as a nod to Americans that do share a history of the neighborhood, but do not share a history of willing immigration.

Connecticut sits on land that was once stewarded by the Mohegan, Mashantucket Pequot, Eastern Pequot, Schaghticoke, Golden Hill Paugusset, Niantic, Quinnipiac, and other Algonquin peoples. The state also participated in slavery through 1848. The last recorded sale of enslaved Black people in New Haven took place in 1825 on the New Haven Green, according to records in the New Haven Museum.

The Rev. Harlon Dalton, a committee member and priest at The Episcopal Church of St. Paul & St. James, praised fellow committee members for ideas he had listened to Wednesday night, during the same subcommittee meeting at which Proto spoke. He noted that preliminary thoughts for the monument are expansive and include a wide lens on public art, including nonrepresentational projects.

“It was really quite amazing and quite powerful,” Dalton said. “It’s just important that we all know what we bring to the table.”

In the next weeks, the committee plans to send out a press release to media and community partners, seeking proposals through Oct. 12. After that date, the subcommittee will vote on a project, work with an artist, and determine the cost of the monument.

Ideas and suggestions for the new monument may be submitted to the subcommittee by email to woostersquaremc@gmail.com by midnight October 12, 2020.