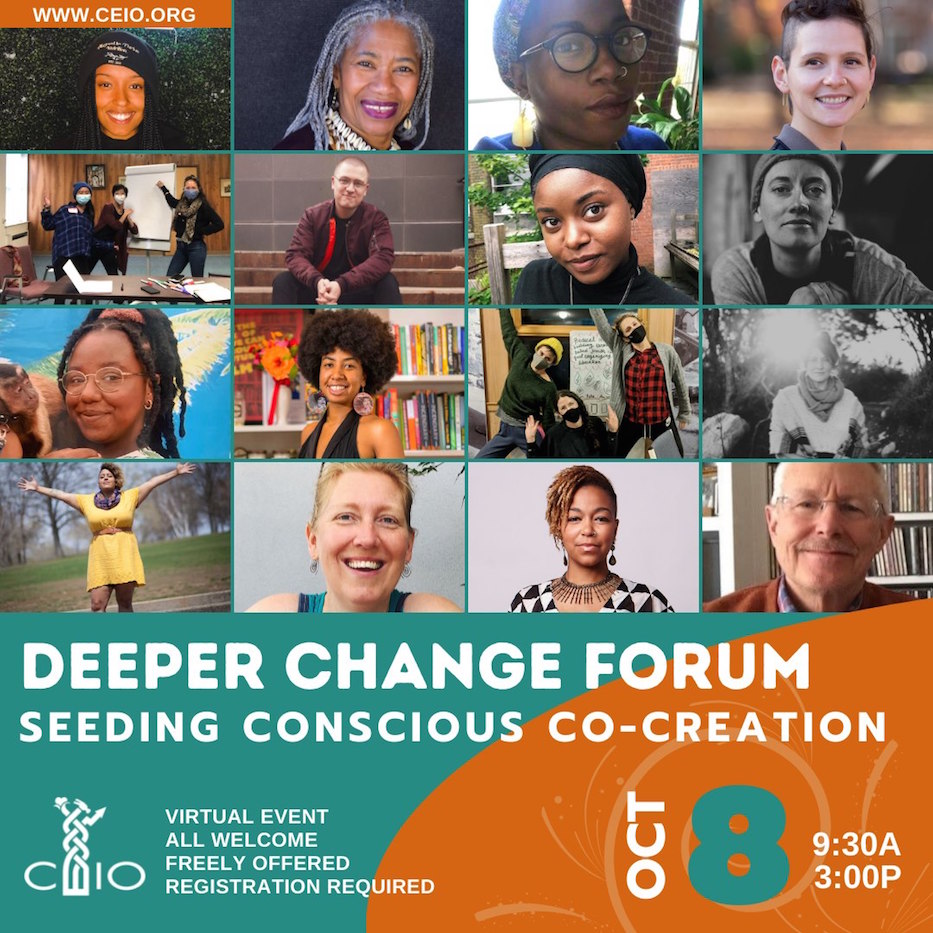 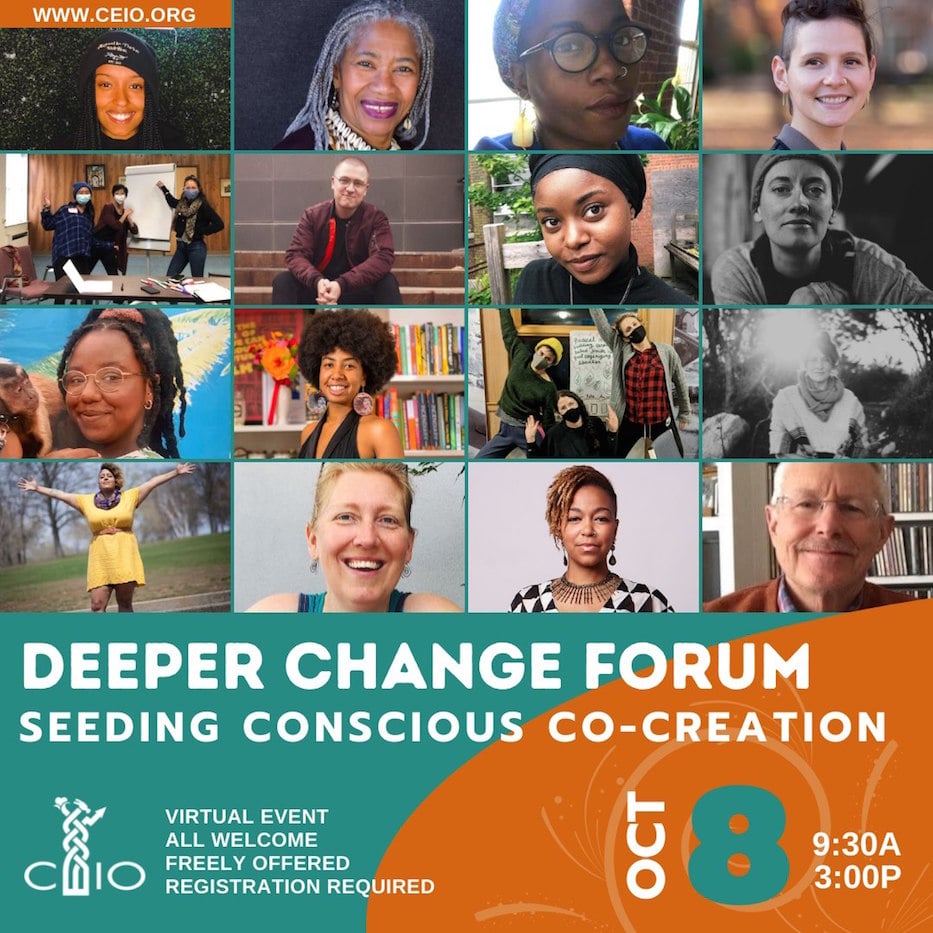 An artists’ haven and healing space for queer people of color. A collective of white educators, teaching each other to bend towards abolition. A group that believes in a New Haven without police or prisons. A joy-based havurah for “Jews at the margins,” still figuring out what exactly that means to them. A digital Palaver Tree.

Those are just a few of the projects in this year's inaugural Seeding Consciousness Co-Creation, a new, year-long initiative from Co-Creating Effective and Inclusive Organizations (CEIO) that supports groups and individuals tackling systemic racism, de facto segregation, religious ritual, and the carceral state in their work. It is helmed by artist-activist, writer and Fireside Project co-founder Hanifa Washington with assistance from "support guides" David Carter, Lisa Graustein, Thema Haida, and Kristianna Smith.

In all, CEIO has dedicated $100,000 to the new initiative, which Washington said it hopes to replicate in the future. Projects, of which there are nine in total, support anti-racist educators, prison abolitionists, multimedia artists, a collective of non-Zionist Jews, arts leaders and administrators of color, and mental health professionals who are looking for a new way to practice. Some are led by just one person; others involve small groups of people.

On Friday, they will present their work at a virtual deeper change forum on Zoom. Read more about each of them here and register here.

“We’re working to create these communities of practice,” Washington said in a recent interview over Google Meet. “It’s the intention of holding the circle, helping to increase conscious co-creation. Folks were tasked with thinking about how to … dismantle various systems of oppression and offer that up to the community. And in that work, what undoing and reflection would they need to do themselves?”

The inaugural cohort comprises 16 people across nine projects. For a year, participants—Washington calls them “vision holders”—have worked with one support guide per project to track their progress, implement programming, identify potential collaborators, and spend time shaping their work.

The nine projects took on wildly, wonderfully different forms, Washington said. Seeds and Sprouts New Haven, a group of mental health providers working to make care both police-free and more widely accessible, looked inward at its organizing practices. It has since gathered in New Haven—at a town hall and protest in June, outdoor barbecue on Juneteenth, and series of online “Consciousness Raising” workshops in the spring and summer. It plans to expand the work to liberation circles going forward.

In creating Kurudi Watu (“Return of the People”), Elm City Lit Fest’s IfeMichelle Gardin and Shamain McAllister joined forces with artist and arts administrator and Briana Williams to create an affinity and learning space specifically for arts leaders of color. Their hope, they wrote, is “a New Haven cultural ecosystem in which BIPOC artists and arts leaders are thriving working in their own communities and beyond.”

Educators Nataliya Braginsky and ​​Sarah Tracy-Wanck formed Aspiring Abolitionists: White Educators Contending with Conscious Use of Power, a program that feels right on time (or long overdue) as students and staff continue to report micro- and macro-aggressions from their white teachers and administrators, and the state hurdles toward its fall 2022 implementation of Black and Latinx Studies in high schools across Connecticut.

Civic Impact Lab founder Johnny Shively, who has since left New Haven for graduate school, spearheaded a similar project in his abolitionist “imagining sessions” with members of CityWide Youth Coalition.

“To think about the launching of this program in the midst of the pandemic and how powerful it has been … what an antidote,” Washington said. “The choice was really conscious on our end."

That’s true of projects like STR8OUTTEDEN, a monthly meeting space for Black women led by New Havener ​​and environmental organizer Jhoni Ada. While Ada first imagined the project as centered in New Haven, she discovered a community of “artists and creatives” that became international with the pandemic. Participants currently use Google Meet, which also allows Ada to create a digital archive. After joining Seeding Consciousness in October 2020, she launched her first liberation circle in July of this year. It is intended to run for a full year, with future iterations in the works.

“When I began conceptualizing STR8OUTTEDEN, I knew that it was going to be a liberation circle,” Ada said in a phone call Monday afternoon. “I am Nigerian-American, and one of the things that I have not been able to let go is the idea of intentional and beautiful and deeply rooted community.”

She looked to the West African concept of the Palaver Tree, a traditional gathering place for community members to come, talk, resolve conflict, and make collective decisions. With that kind of space in mind—even if it was digital—she built a program with eight artists who could gather each month, and dig into topics that have included shame, grief, and anxiety.

All of them are engaged in “impact projects” of their own, she said, and all have received funding that was redistributed from the initial CEIO grant. Source texts for the program include The Homecoming Podcast, a project of Dr. Thema Bryant, and Julia Cameron’s The Artist’s Way.

“My people, we do have a patriarchy, but we have a strong matriarchy as well,” Ada said. “One thing that I realized about America was that this conversation doesn’t exist. And for Black women, which is my heartbeat, this doesn’t exist.”

“If you think of it like a circle, community is in the middle,” she continued. “Around it is action, accountability, authenticity. And basically the soul work that we do is around topics like grieving, identity, anxiety, shame. These are really, really big conversations. The intention is to be a seed, or to be like clay, and to realize that this is not our final form but we gotta get dirty first.”

With the exception of a masked, three-day in-person retreat last October, groups have met and structured programming largely online. That’s not been a problem, Washington said—there’s an urgency to the work that feels palpable, particularly as the pandemic passes the 18-month mark. In particular, she pointed to the importance—and relative rarity—of giving artists and project leaders the capital and the space to dream. On Friday, she hopes that members of the public can get a glimpse into the effort that has gone into making those dreams real.

“Literally, everything around us started in the imagination,” Washington said. “Nothing just like, shows up. There’s a process where it didn’t exist, and it was in the realm of imagination, and someone thought of it and make it happen. There’s such majesty and magic in being allowed to have the space to dream. Having the space to think of possibility—that is where change is. It is where possibility lives."

CEIO's Deeper Change Forum with these nine projects is scheduled for Oct. 8 from 9:30 a.m. to 3 p.m. Register here.