PRIDE Kicks Off On A High, Bright Note 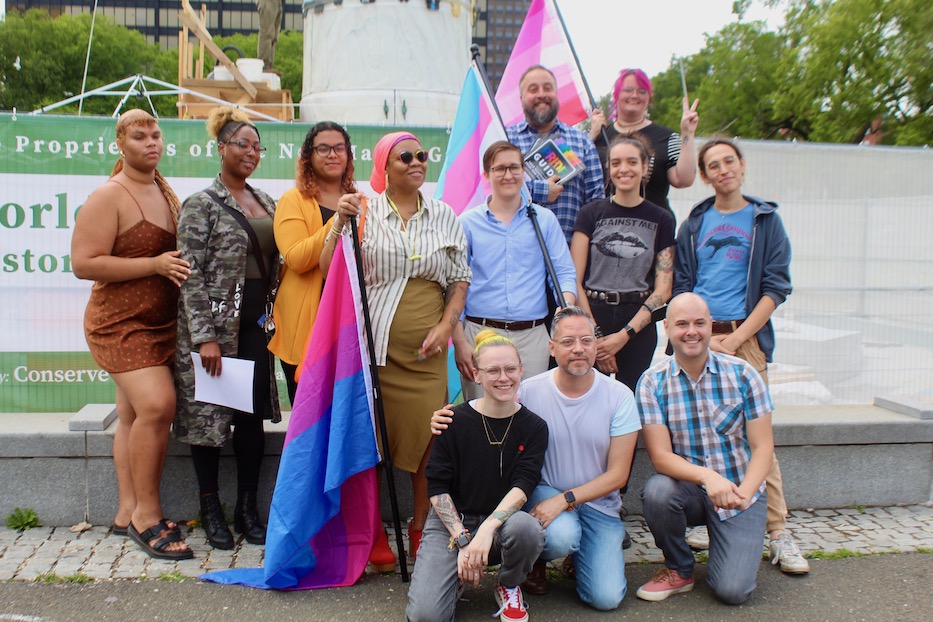 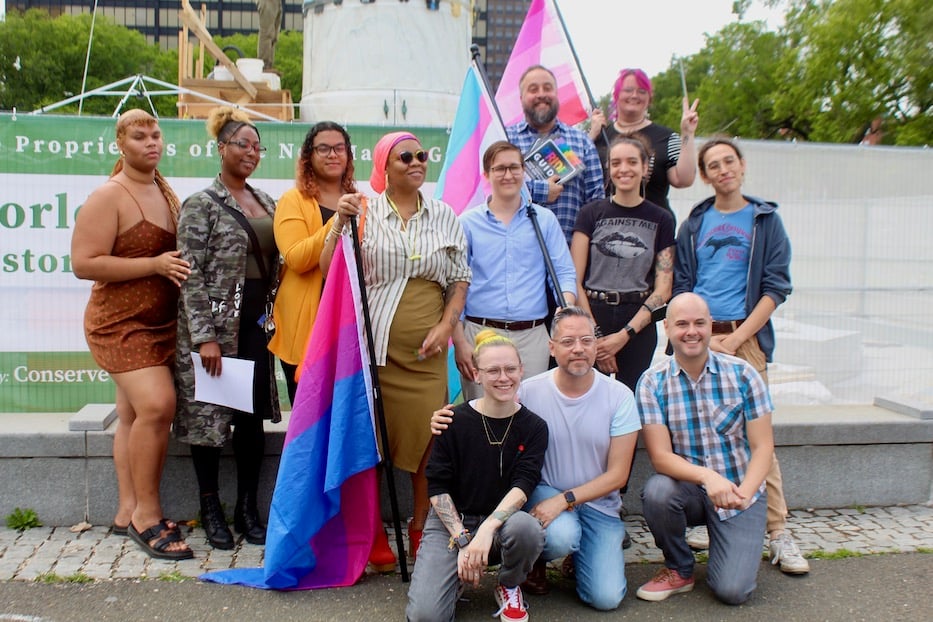 Gilbert Baker's rainbow flag made its way slowly up the Green's flagpole, its stripes flapping against a smear of blue sky. At the mic, Rashawn Lee leaned in, his voice cutting through a thick humidity that had settled over the crowd. We are a family! Like a giant tree! Branching out toward the sky! he belted. As the words sailed over the grass, ears seemed to perk up across the space, hanging onto each word.

As they watched the flag rise from below, attendees and New Haven Pride Center staff saw both the beginning of a celebration, and a moment that might save someone's life.

That belief in queer visibility defined PRIDE New Haven's now-annual flag raising, held Monday afternoon on the New Haven Green. As roughly two dozen gathered for the event, it doubled as a kickoff to the week-long celebration, which features 25 events over eight days.

They include keynote conversations, justice-focused panels, culinary tutorials and tastings, multiple drag and burlesque performances, a concert at the State House, and day long celebration on the New Haven Green. The festivities run through Sunday Sept. 18; read more about them here and get a full schedule here. 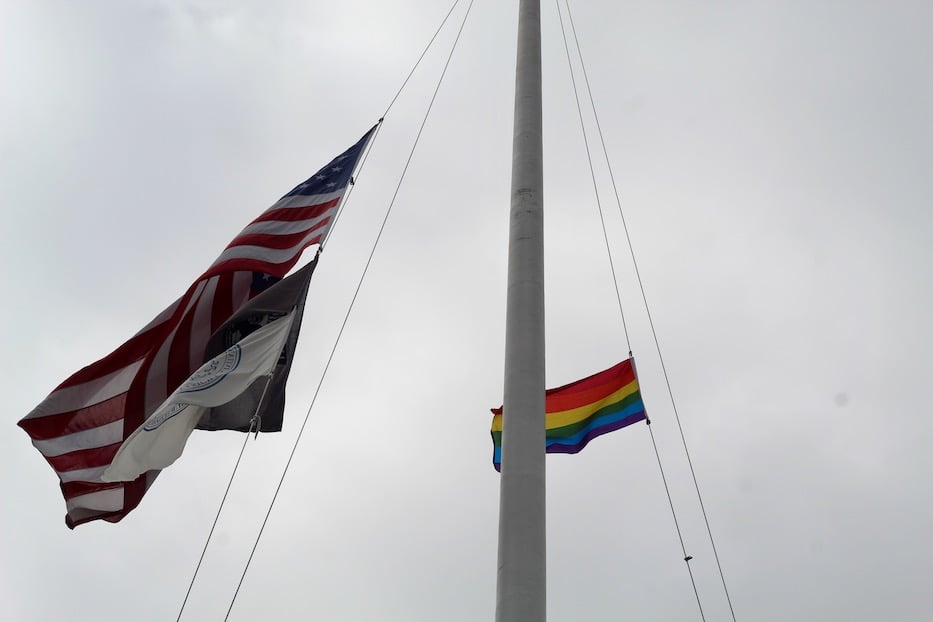 Throughout, both speakers and NHPC staff have woven in reminders that PRIDE started as a riot, from panels on Black queer feminism, disability, fatphobia, and rainbow capitalism to performances of drag artists at the margins of their own form. For the first time ever this year, a "fringe fest" will be running parallel to PRIDE, with participants including Strange Ways, 80 Proof Kitchen & Bar, Artspace New Haven and the New Haven Free Public Library.

"Raising a flag for any kind of community event, particularly a minority community, is really important because it is a visible sign to the world that the City of New Haven stands with LGBTQ people, both here and across our country and around our world," NHPC Executive Director Patrick Dunn said Monday. "PRIDE has been an event that has existed in our city to bring us together, to celebrate, to honor, and to uplift."

This year is particularly meaningful, Dunn added: it marks the first time in over 15 years that PRIDEfest is back in the heart of New Haven, where it will unfold on the lower Green for seven hours on Saturday afternoon. In 1998, PRIDEFest started as a rally on the Green, with support from Gotham Citi owner Robb Bartolomeo, the NHPC (then called the New Haven Gay and Lesbian Community Center) and the administration of then-mayor John DeStefano. Since 2004, it has traveled from Center Street and the city's Ninth Square neighborhood to the North Haven Fairgrounds.

To have it where it began almost almost 25 years ago—as the Pride Center itself moves beyond the quarter century mark—marks a kind of full circle moment. 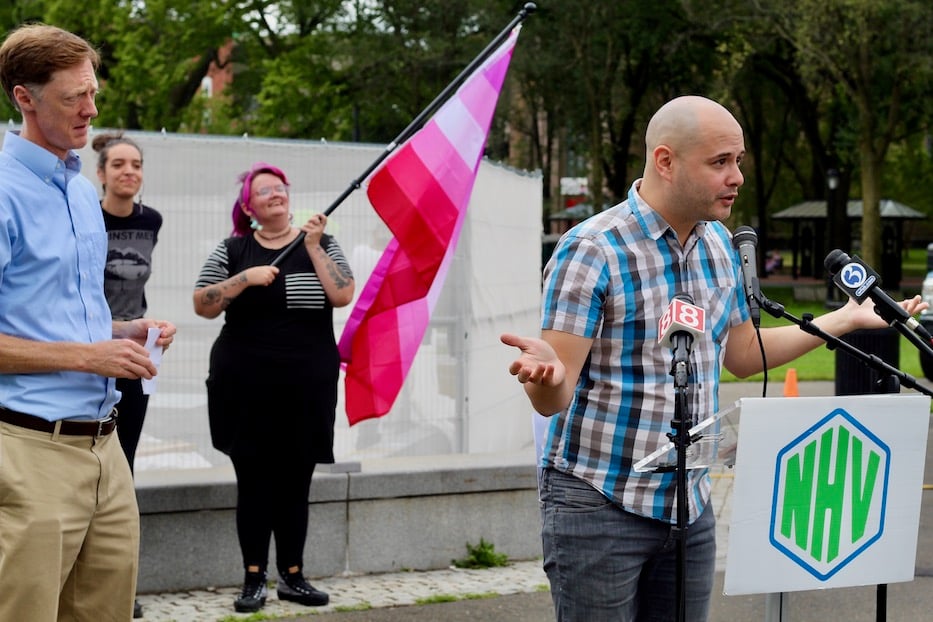 Top: Lesley Heffel McGuirk, who is planning to register voters at PRIDEFest on Saturday. Bottom: "PRIDE has been an event that has existed in our city to bring us together, to celebrate, to honor, and to uplift," Dunn said.

Both Dunn and Mayor Justin Elicker noted that it also marks one of needed and timely resistance, as LGBTQ+ rights come increasingly under attack. Even as the flag rose brightly into the sky, it was hard not to think about the number of bills proposed in this country this year—nearly 200 and counting—seeking to roll back LGBTQ+ rights. As in 2021, the bulk of them are aimed at trans youth, particularly those seeking gender affirming care.

Last year, a study from The Trevor Project found that trans and nonbinary youth with access to gender affirming hormone therapy were less likely to be depressed or to consider or attempt suicide. A second 2021 study, completed by a research team at Harvard Medical School, showed that gender-affirming surgery also boosted mental health and lowered the rates of depression and suicidality.

"PRIDE is about talking about what we are proud of, but it is also about reasserting that we have much more work to do, and we need to fight against every action working to undermine those values," Elicker said. "Let's be real, that we live in a world where the fight is on right now, and we should continue to fight. We should not be complacent."

For him, he continued, that means pushing for stronger LGBTQ+ rights, protections and representation at both the national and state level. With representatives from Rosa DeLauro's office listening, he advocated for enshrining a national, constitutional right to gay marriage ("Okay!" said Director of Youth Services Ala Ochumare as a few snaps went up from the crowd) before a conservative U.S. Supreme Court can roll it back. He lambasted gubernatorial candidate Bob Stefanowski for "making statements that were designed to enflame the culture wars" last week, when he introduced an openly anti-trans "Parental Bill of Rights."

"We need to fight against that and reject that kind of rhetoric because everyone needs to be supported, and in particular people that have historically been undermined, like our trans young people," he added. "New Haven we stand to welcome everyone, and we will continue to do so."

Lee—introduced first as his drag alter ego, Robin Fierce, and fresh off hosting Hartford Pride last weekend—captured that spirit as he took the mic. Performing Dreamgirls' "We Are A Family," he let the words drift over the crowd, wrapping them in a reminder of how powerful community can be. As he sang—It's more than you! It is mo-ooore than me! Whatever dreams we have, they're for the family—he took his time with the words, breathing into them a meaning that felt written for the week ahead.

"It's to allow people to be who they are, to celebrate themselves, and to recognize that there are queer people like you," he said of PRIDE in an interview after the event.

For him, that's personal. Born in Brooklyn, Lee grew up in New York and then Connecticut, ultimately making Hartford his home base. When he came out at 20, "I was able to feel more myself," he said. Robin, who has become one of the most popular queens in Connecticut and along the East Coast, was born shortly thereafter.

Lee estimated that he's worked closely with the New Haven Pride Center for the last four years, since Dunn became executive director in 2017.

"We're all out here and able to be our queer selves," Lee said. "Living and laughing and loving."

In a conversation after the event, Dunn stressed the importance of PRIDE as both a celebration and a reminder that queer people live at the intersection of every marginalized identity. Both in and beyond New Haven, he's aware that there are people who identify as LGBTQ+ but are not yet out for any constellation of reasons. In part, he said, PRIDE is for them.

"They can see for themselves that we're out here," he said. "That can save someone's life."