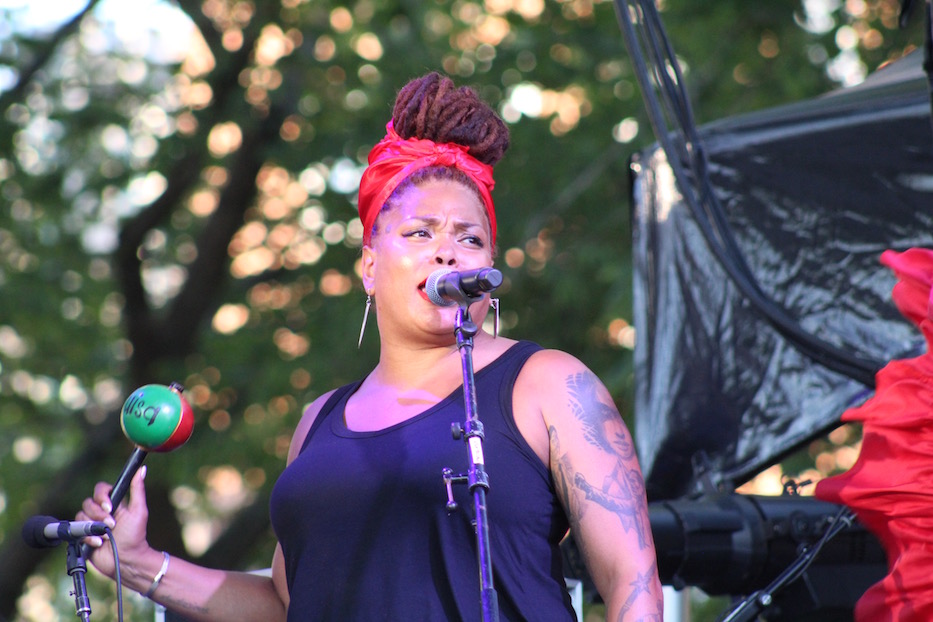 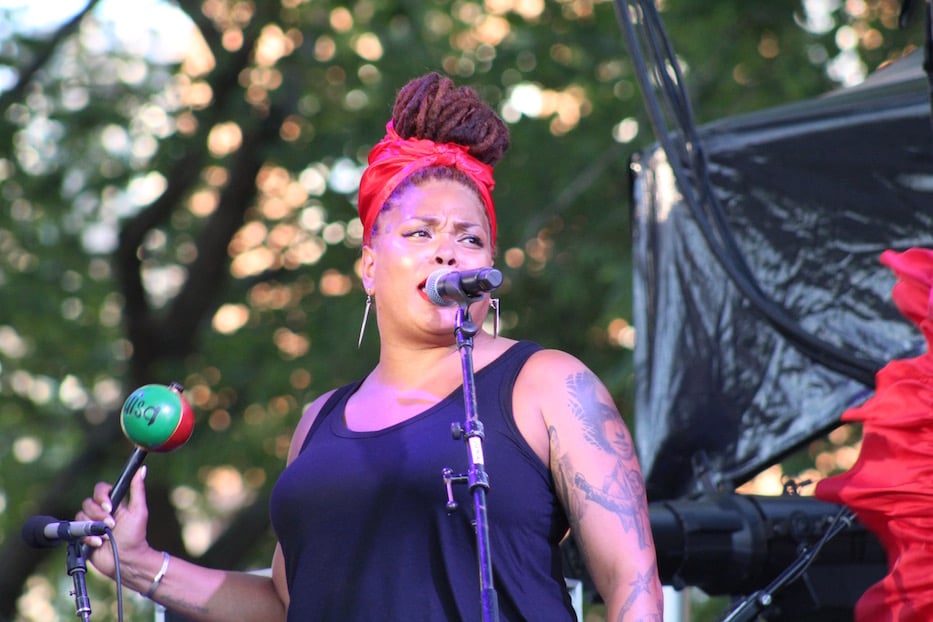 Addys Castillo, who runs Citywide Youth Coalition and has fused her art and her activism in organizing across the city. Lucy Gellman Photos.

The cry became an incantation as Addys Castillo sang, her eyes scanning the audience for faces that she recognized. Loma! she sang, splitting the word into two clean syllables between her lips. Mujer Guerrera, se fue pal monte. In the crowd, she found labor activist Dolores Huerta dancing to the drum. Lo-ma! ​​Dolores Huerta! She called out, reverence in the corners of her voice. She spotted organizer Jahnice Cajigas seated on a blanket, and for a moment sang straight to her. Loma! Jahnice!

From the front of the stage, her voice carried across the Green and out onto Church Street.

On a recent Saturday night, Castillo and members of the bomba collective Proyecto Cimarrón lifted the New Haven Green in song, dance, and spirit as they opened for Las Cafeteras at the International Festival of Arts & Ideas. For almost an hour, the group sent up a centuries-old and still trenchant rallying cry, preaching resistance through their art. By the end of their set, they reminded the audience that it was possible to choose joy and liberation, even in the darkest of moments. 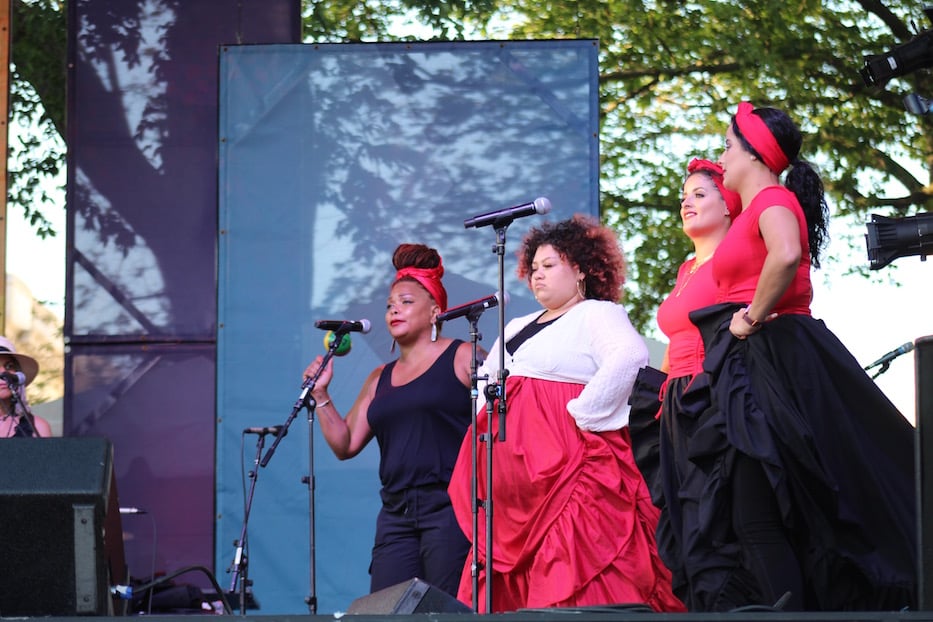 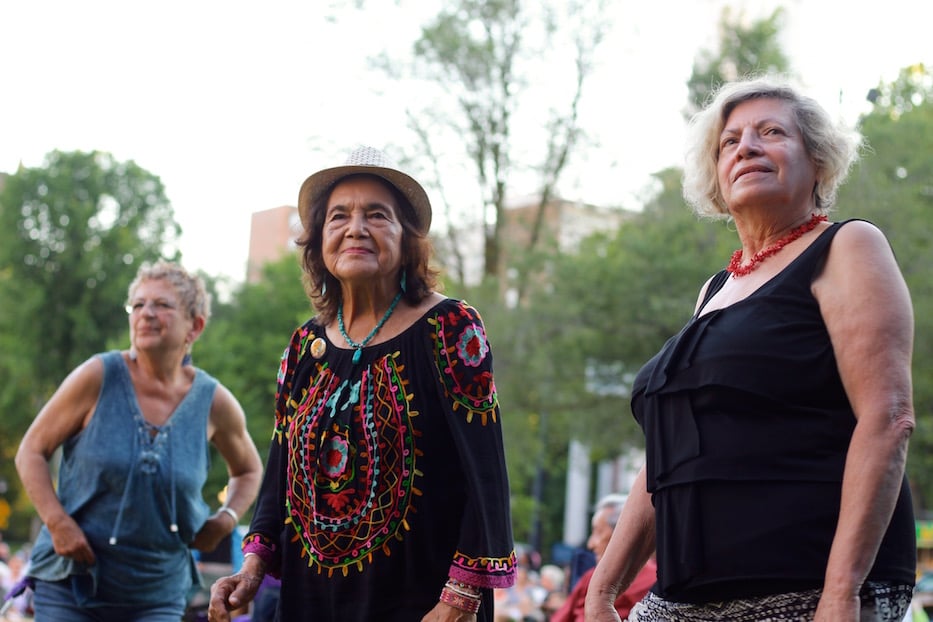 Proyecto Cimarrón includes musicians and artist-activists Carlos Cruz, Asher Delerme, sisters Kica and Monica “Cuqui” Matos, and sisters Naomy and Natasha Velez. During Saturday’s performance, New Havener Efrancheli "Frenchie" Ducos-Rivera and Waterbury-based drummer David Calderón also joined. For over an hour, the collective got New Haven on its feet, dancers of all ages transforming to the steady, resonant echo of the drums.

“This song is dedicated to all liberated women, cause they’re trying to lock us back up in the closet y’all,” said Castillo as she introduced Norka Hernández Nadal's “Loma” to hundreds of people who had gathered on the Green. “They’re trying to put us way back into the 50s.”

A cacophonous, unrestrained bellow rose from the audience, and it took a moment to realize that dozens, then hundreds, of voices were booing that historical backtracking with her. If they rose loudly enough, it seemed for a moment, they would reach the U.S. Supreme Court, where justices had days earlier reaffirmed the right to carry guns, and then struck down Roe v. Wade. 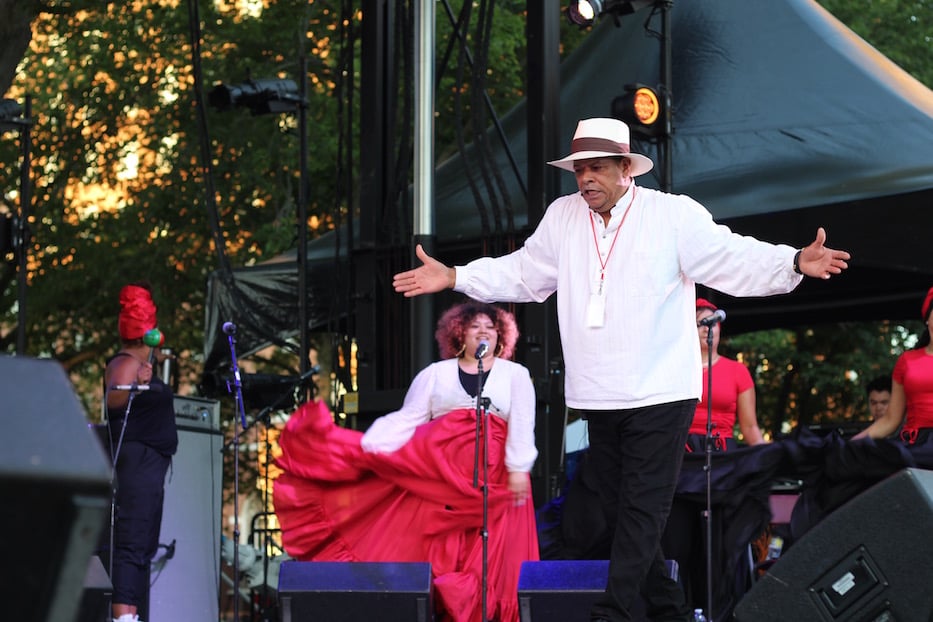 Carlos Cruz, who has been heralded as the “Prince of the Black Verse” by the Puerto Rican Institute of Culture. Lucy Gellman Photos.

For the group, founded last year as a space for healing, it was an opening. As the sound floated out over the New Haven Green, their drums, footfalls, and rising voices connected them to a history of resistance. Born in Puerto Rico, bomba is a communicative form of dance and drumming that spread during the Afro-Caribbean slave trade. It rattled and thrummed to life in Loíza, once a bustling center of the slave trade, and spread out to Puerto Rico and across the vast Afro-Caribbean diaspora.

In its propulsive back-and-forth between drummer and dancer is the road map to freedom.

Around the musicians, the city was a landscape of grief. In the week before the group took the main stage, Richard “Randy” Cox had been severely injured then forcibly dragged into a cell while in police custody in New Haven. Mass shootings—one after the other after the other—were rattling the country. Less than 24 hours before Castillo began to sing, pregnant people, and people with the ability to become pregnant, lost the right to their own bodily autonomy in at least nine states.

Proyecto Cimarrón wasn’t having it. With each drumbeat, each footfall, each call of Lo-ma! Lo-ma! Castillo reminded listeners that to injustice, there is always the option of fighting back. From the state courthouse across Elm Street, sunlight fell over the same steps that Black Panthers Bobby Seale and Ericka Huggins once ascended. Across Church Street, a few smudges still remained on the pavement from a protest from reproductive rights the day before. Across the Green, Ben Haith’s Juneteenth flag flapped in the wind, after a decades-long effort to get it flying over New Haven. 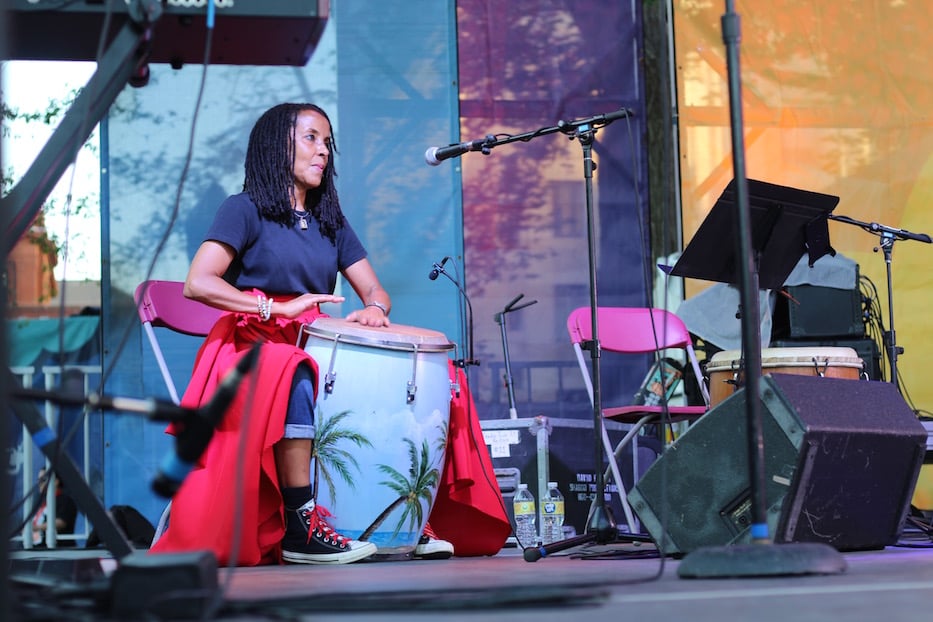 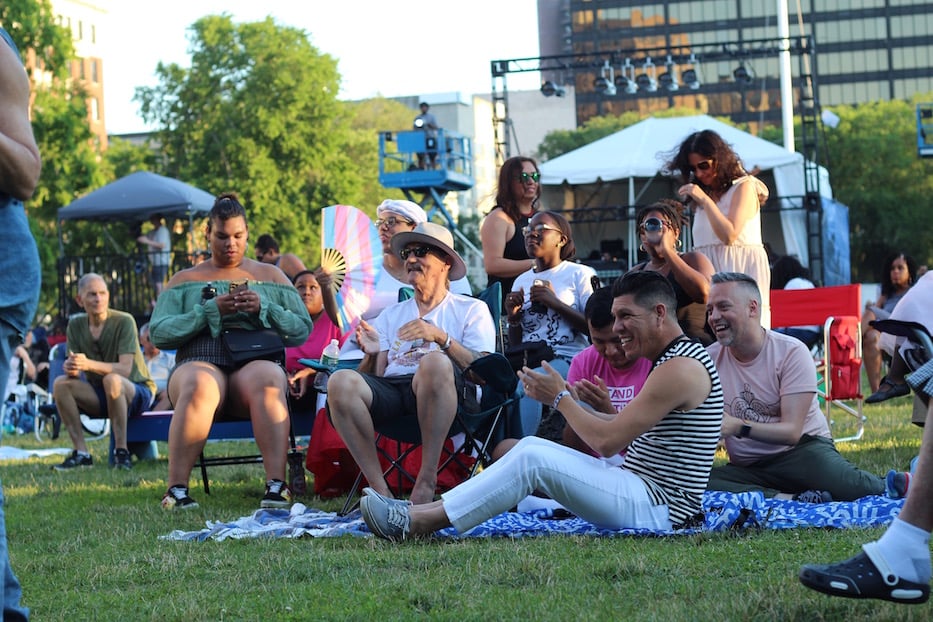 And with every moment, Castillo and Matos channeled the summer of 2020, when they brought their barriles, their feet and their sweeping, carnation-red bomba skirts to Black Lives Matter protests and teach-ins that spanned the city from downtown to 1 Union Ave. to East Rock. The sense of a through line reached back centuries: Proyecto Cimarrón has never been shy about its African roots and the power it has as an enduring Black art form.

Onstage, that thread ran through the remainder of the performance, from original spoken word poetry that had Cruz on the lip of the stage, his arms flung wide, to a contemporary ode to Puerto Rican shero Lolita Lebrón by the members of Plena Combativa.

It was there when Ducos-Rivera, long a member of Citywide Youth Coalition, carried the group in song and Castillo took the stage, a maraca still in one hand as she bowed to Delerme and began to work her way across its expanse. She let the music sink into her body, moving with the drums as they, in turn, moved with her. 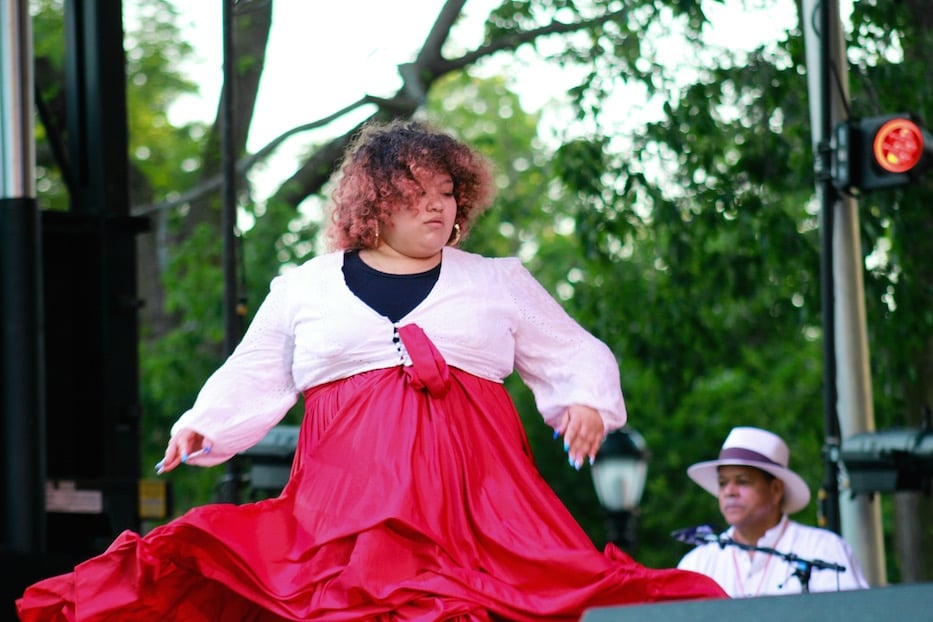 “Thank you for coming out to jam with us tonight,” Castillo said minutes later. Onstage, she welcomed Las Cafeteras frontman Héctor Flores, Official Juneteenth Coalition of Greater New Haven Co-Founder Hanan Hameen, and Festival Executive Director Shelley Quiala. As the drums rose for a final number, the three fell into line, dancing to the beat as the sun began to sink above them. At stage right, Ducos-Rivera and the sisters Velez lifted their skirts and stepped to the same rhythm.

In the audience, families stood, some still dancing with their children as others spread out across blankets and settled in for Las Cafeteras. Familiar faces filled the crowd, from teachers Natalie Jimenez-Lara and José Lara to members of the Semilla Collective to Nelson Pinos, who heard the last Las Cafeteras concert in New Haven from inside First & Summerfield United Methodist Church, where he was taking sanctuary. As dusk fell and the drums rang out a final time, it seemed for a moment, all of them were moving toward some version of freedom.