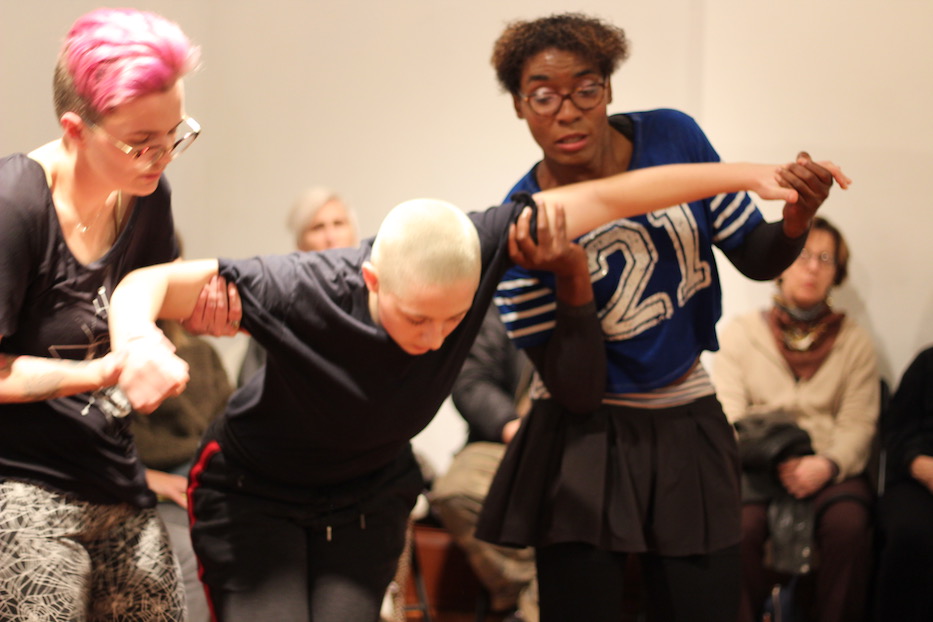 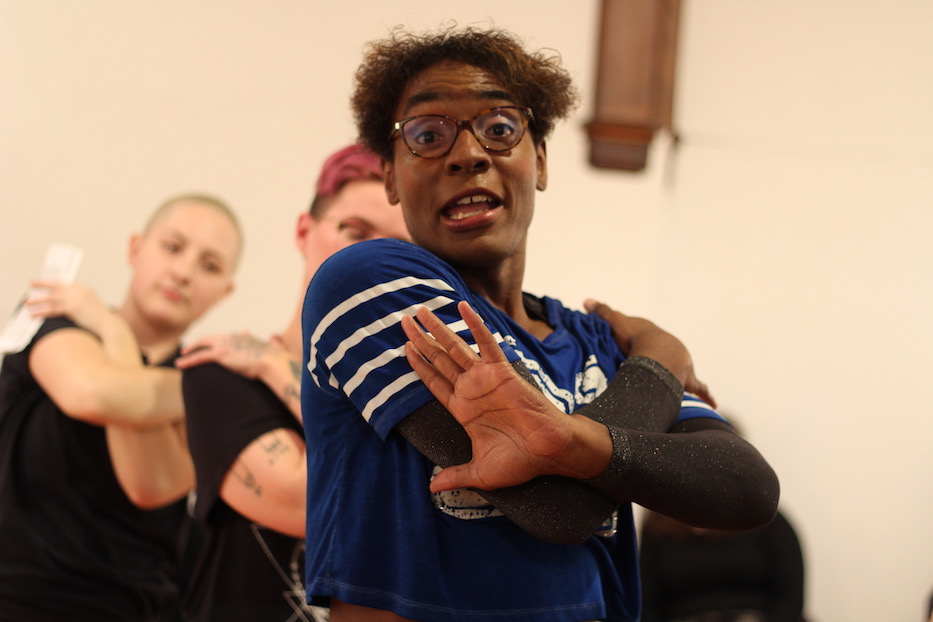 Three bodies circled each other, hands nearly overlapping. Feet pressed into the floor; toes gripped the floorboards and then lifted off on heels and tiptoes. A synthesizer pulsed in the background. One body stepped forward, shoulders and forehead already glistening with sweat. A cropped sports jersey swayed at her torso. There was a single beat.

“I feel most alive when everything I’ve been collides with everything I am,” she announced. Her voice was strong, like it could raise the beams of the house if it needed to.

Tuesday, three bodies came alive at the Ely Center of Contemporary Art in a moving performance of Trans Body II, the second part of a commissioned work from the New Haven Pride Center and Elm City Dance Collective (ECDC) in partnership with three dancers who identify as transgender. Participants included activist-journalist and Trans Lifeline operator Karleigh Chardonnay Merlot, artist Finn Lockwood and a third dancer who asked not to be identified by name in the article.

The work is part of Transgender Awareness Week programming in New Haven, which includes an annual Transgender Day of Rememberance vigil on the New Haven Green, trans resource swap at the New Haven Pride Center, and open mic night with Life In My Days. 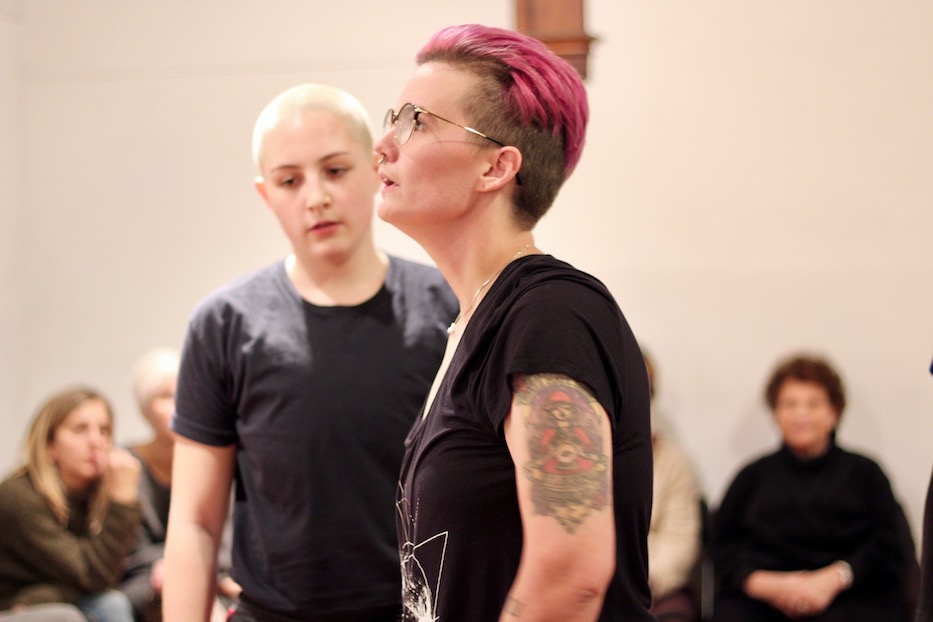 “We believe in the power of dance as a platform for personal discovery,” said ECDC Director Kellie Ann Lynch before the performance, adding that it was very much a collaborative effort. “The premise was about storytelling through dance and identity. And everybody can relate to that, no matter how you identify.”

“Arts and culture has the power to change hearts, minds and souls,” added New Haven Pride Center Director Patrick Dunn. “It is a way to tell our stories to people who may not otherwise be willing to hear those stories.”

Planning for the original Trans Body and Trans Body II began late last year, when Dunn called Lynch with a self-described “wackadoodle” idea and she agreed to see it through. In early 2019, Lynch opened a call for Trans Body participants downtown, expecting close to 15 people to show up. Instead, only Merlot came. She was all in: in March, she performed the first installment of Trans Body at the United Church on the Green’s parish house for International Transgender Day of Visibility (TDOV).

When the time came for a second installment, Merlot wasn’t alone. Lockwood heard about the collaboration through the Pride Center and signed on in the midst of starting hormone replacement therapy. Another dancer joined because they had seen Merlot dancing in March, and been moved to tears. When they began rehearsals, Lynch and ECDC Co-Founder Lindsey Bauer walked dancers through a series of narrative prompts, almost all of which were accompanied by movement.

In the resulting, 25-minute work, those narratives have come together in sound, breath, and flowing repetitive movement, with room for rough edges (Lynch called it very much a work in progress) and lots of kinetic poetry. As music rolled in over a speaker Tuesday—synth and tin, as if the sound was undulating—Lockwood took the lead, giving steady commands as three bodies began to sway and dip together, then spread out in constant motion.

Arms spread to their full length and swished through the air around them. Knees bent. One by one, dancers faced forward and then turned toward the audience that had been at their backs. They slowed their movement and then lurched back into the present time zone. They lowered themselves to the floor and stood back up, arms windmilling past each other without ever full-on colliding.

Around them attendees leaned in to the performance, watching every churning arm, every popped hip, every lifted foot. From those first movements, dancers spoke their bodies into being, letting viewers in on the backstories of their skin and their comfort level with it. At times, they lapsed right into poetry, calling out the moments that made them feel most alive.

I feel most alive when my inside matches my outside

Breath coasted over the music, binding itself to the soundtrack. Where there was rich and on-point humor—”how to talk to a queer person” is a segment that every American should watch (a little is included in the video below)—there was also deep emotion, dancers literally carrying each other at one point. As Merlot stumbled and fell, extending her arms, the other dancers were there to absorb the weight of her body. They switched out, repeating the exercise.

But if Trans Body II, like its predecessor, is a form of resistance, it is also quite beautiful. It brings to light very real, often overlooked narratives of trans bodies in New Haven, in Connecticut and in the U.S., where the murder of trans people and particularly trans women of color has been called an epidemic. As of this month, Transgender Europe reported 331 murders of trans people worldwide, including 30 in the United States.

Tuesday, dancers carried all of it: emotional trauma and exhaustion; one’s birth family versus one’s chosen family, the power of not being the only trans body in the room.

In a talkback after Tuesday’s performance, all three performers said the work has been transformative for them—as it was for many in the audience. Packing the space to standing-room only, several attendees spent part of the performance in tears. Speaking from the corner, longtime local trans advocate Tia Lynn Waters (more affectionately known by her stage name Bubblicious, or Bubbles for short) said that she could not have imagined a similar collaboration during her youth, when she was around the age that Lockwood is now. She urged ECDC to bring the performance into area schools, as a form of education through the arts.

“There are so many outlets that are happening now that I couldn’t even fathom then,” she said. “This was beautiful.”

Lockwood, who uses the pronouns they/them, recalled starting rehearsals with such high anxiety that they weren’t sure they would finish the project. Nine hours and three rehearsals later, they are thinking of it as a transformative experience.

“It was awesome,” they said. “I started hormone replacement therapy a couple months ago, but I’ve been very disconnected with my body. This kind of motivated me to take ownership of my body.”

“It’s very intense,” Merlot chimed in, noting the moment that dancers link arms and carry each other. “But that’s what we do. Somebody takes your arm and says, ‘I got you. I have you.’ That’s what queer families do.”

“Those acts of community hold you up,” she continued, her voice catching. “Think about what we’re going to commemorate tomorrow. We have to squad up. Now more than ever, we need art to do some truth-telling. And for me, being in this is also a form of resistance.”

If you or someone you know is looking for trans support, crisis management, or community, Trans Lifeline is accessible 24/7. The Trevor Project offers 24/7 confidential support for LGBTQ+ youth in crisis. Other resources include The Trans Women of Color Collective, The Sylvia Rivera Law Project (SRLP), and The National Center for Transgender Equality.