“Welcome To The New World,” Stay A While 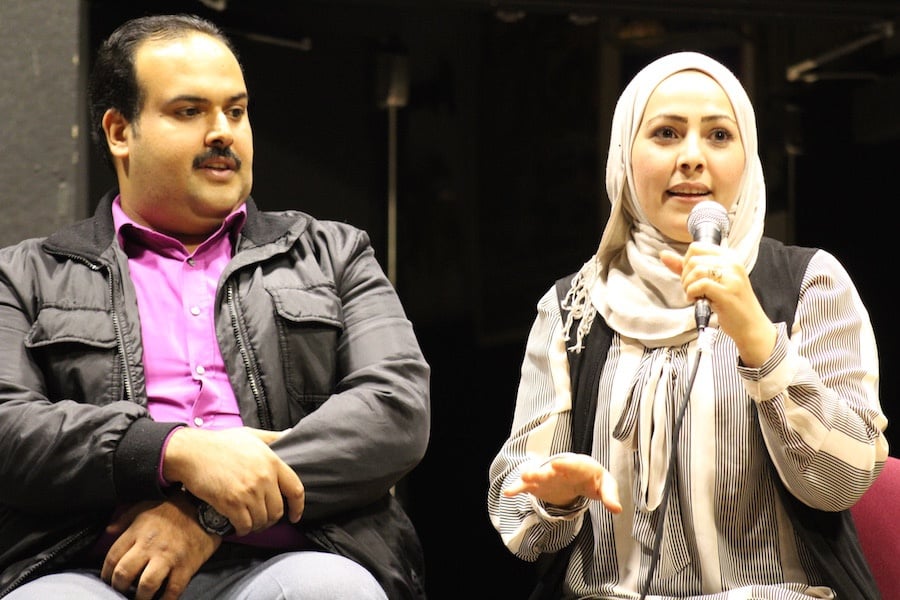 Refugee resettlement isn’t just about resettlement. It’s also about education. But not only for those coming to the United States for the first time— for those already in it too.

That was the message Integrated Refugee and Immigrant Services (IRIS) Director Chris George and writer-illustrator team Jake Halpern and Michael Sloan delivered Tuesday night, to a packed theater at The Foote School in East Rock. Over 100 attended the event, a discussion of Halpern and Sloan’s New York Times series Welcome To The New World, which ran over 20 installments and won a 2018 Pulitzer Prize.

The discussion was sponsored by Foote’s parent-led group MOSAIC (Multicultural, Open-Minded, Supportive, Accepting, Inclusive Community), which hosts two events per year. Previous topics have included mass incarceration, Civil Rights, the Armenian genocide, the India-Pakistan partition, and America’s internment of its own Japanese citizens, as told by a survivor of one of those internment camps.

“We always try to bring a message of inclusion to to help people understand topics that they have not been exposed to,” said MOSAIC organizer and Foote School parent Kiran Zaman before the event.

As they took the stage Tuesday, Halpern, Sloan, and George first spoke about pitching and reporting out the graphic narrative, which follows two Syrian brothers and their wives and families as they arrive in the United States on election night 2016, and find themselves navigating a changed America. In the comic, their names have been changed, a measure Halpern and Sloan took to protect their identities. In real life, two of them are New Haveners Issa and Aminah, who now runs a robust catering business and has worked with CitySeed’s Sanctuary Kitchen Program. 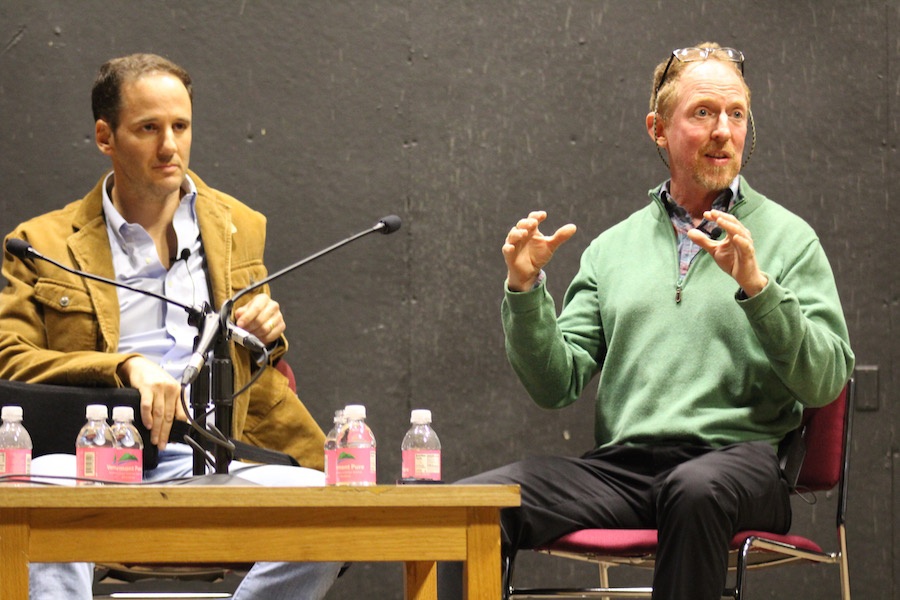 Welcome To The New World began months before the 2016 presidential election, at a time when polls were still predicting Hillary Clinton would win the country handily, and IRIS was in the thick of resettling over 530 refugees, half of the state’s 1000 for that year. Well before the families’ arrival, George had agreed to let Halpern and Sloan meet them as they touched down in New Haven, the last stop after a long flight and bumpy CT Limo ride from JFK Airport. They were there with the condition that they keep their distance, and seek informed consent before telling any form of their story or continuing with the project.

As polls closed across the country, Halpern and Sloan drove out to meet the families at New Haven’s drop-off point, close to the betting hub Sports Haven on the city’s Long Wharf (“New Haven in its finest,” Halpern quipped at the panel). With an Iraqi translator named Maher, they dipped inside the arena, coming back out to watch the families from afar as they arrived. Halpern recalled saying hello to Issa and Aminah. Sloan was moved by their young children as they bounded from the car to take in an entirely new city. Then the two got in their cars and drove home.

It was early enough in the evening that Halpern—with a good chunk of the country—still thought Hillary Clinton would take the election. As Halpern headed home, he began checking his cell phone, thrown off by what what he saw. A map of the country was starting to turn red, first slowly, then not so slowly. He got home, stayed up for a little while longer, and recalled thinking “ooh, this could happen.”

When he woke up to recheck the New York Times at 2:30 a.m. the next morning, it had. The headline announced “Trump Triumphs” in big, bold letters.

The next morning, he started listening to the audio from Maher's first interviews with the families. He thought about what he and Sloan had been able to observe the night before. He send off an email to Bruce Headlam, his editor at the New York Times. 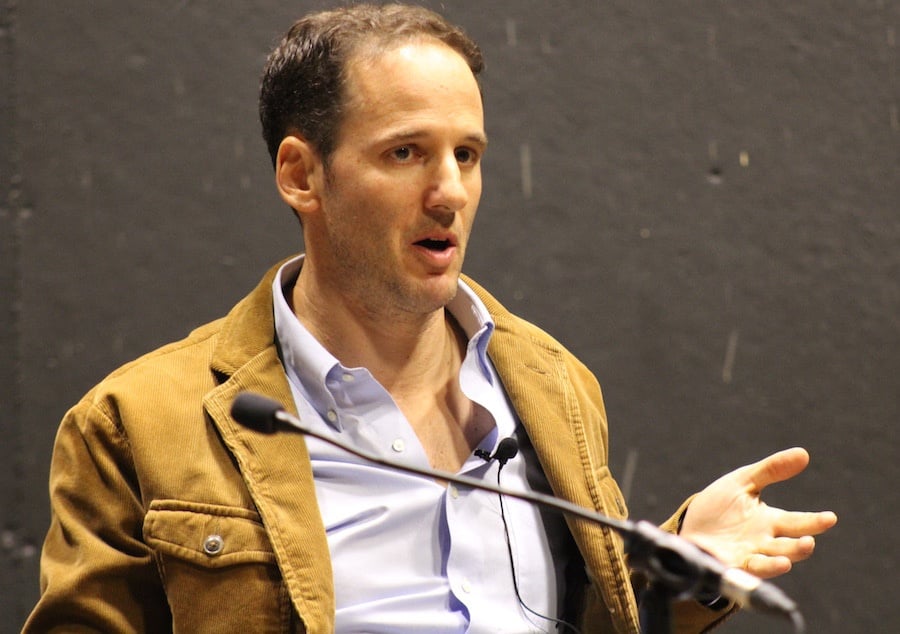 “This is a completely different story,” he wrote to Headlam. “This is a story about a family who landed in one country and woke up in another.”

“I was electrified with the possibility that this story was an important story to tell,” he recalled. “And honestly, somewhat selfishly, it was something positive that I felt I could do on an otherwise dark day.”

What followed, he and Sloan said, was that completely different story. Working with the artist and architect Mohamad Hafez, Halpern began interviewing the families, often moved by their honesty about what they had faced and what they had left behind in Syria. He recalled several meetings at which they would sit down to talk—in the beginning, Issa and Aminah offered him the only chair they had in their home—and within minutes would be discussing the intimate and gut-wrenching stories of civil war. He had been worried they wouldn't trust him. Instead, they placed their stories in his hands.

"You know, we came here—many feelings we have," Issa said during a question-and-answer session Tuesday night. "Something scared, something thinking of the future ... but we trust you."

By January 2017, Sloan said the two had a system for the series—and “more confidence that this project was really going to fly.” After each interview session, Halpern wrote a script that Sloan would illustrate, the two working through details as the sketches turned to final products. Then they would circle back to the families, to confirm that they were getting it right. Once the Times began running the series—it dropped online Jan. 26 of last year, just a day before Trump’s first travel ban—they worked on tight deadlines, submitting weekly and then monthly comics.

He pulled up a PowerPoint that showed sketches from start to finished product. In one, the character “Ammar” has returned home late from work, his wife too petrified to sleep after not hearing from him for hours. Earlier in the year, the family had received a death threat in the northern part of the state, forcing them to flee their town and resettle again (it is chronicled in the series' tenth installment). Now Ammar wasn't answering his phone when his wife called to check in.

In the initial sketch, the eight-panel comic ends with the two slumbering away, Ammar closest to the viewer, his work key next to the alarm clock on the bedside table. That didn’t adequately convey the family’s sense of fear, Halpern suggested. In the finished version, the wife looks out at the viewer, her eyes wide open. The clock reads 2:14 a.m.

In another, Sloan walked the audience through multiple sketches of a family inside a taxi, as they left their home in Homs, Syria. Halpern wanted to convey the importance of a single item—their house key, a physical sign they might return—across the panels. In the final image, the husband hands it to his wife, the key gleaming as it passes between their hands.

Part of what makes the series successful, George said, is its role in educating fellow Americans about the refugee crisis and extensive vetting process that refugees and asylum seekers must go through. In 2016, IRIS had had its biggest year on record, welcoming refugees who included a family that Vice President Mike Pence, then the governor of Indiana, had turned away. Now, that number has slowed precipitously, federal aid disappearing with it. 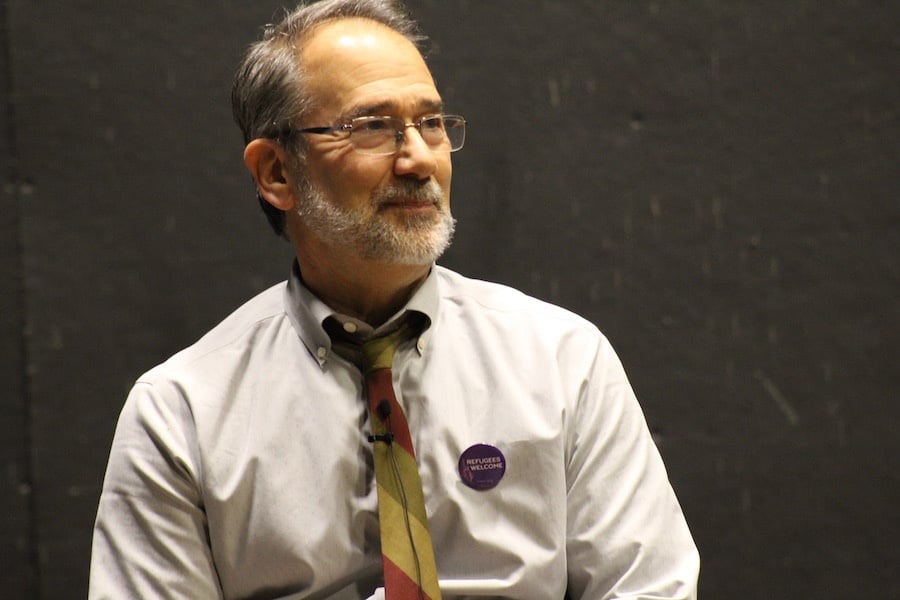 “And if we don’t, there’ll be no support or refugees.” he continued. “We shouldn’t be resettling refugees in the shadows, under a radar screen. We should be doing it with as much publicity and involvement and public education as possible.”

Taking a moment to remember the 11 victims of last week’s shooting at a Synagogue in Pittsburgh, Penn, George also called aiding and resettling refugees “the oldest, most noble, most humanitarian tradition this country has.”

Now, Welcome To The New World is growing its footprint. In the time since the series began, Aminah has started a successful catering business and learned extensive English from one-on-one tutoring sessions and YouTube. Halpern and Sloan are planning to turn Welcome To The New World into a book, with the two years of stories they have collected that didn’t make it into the New York Times.

Halpern recalled one of those as the evening wound down. Early on in the series, he had accompanied Issa and his brother to a mosque on Boston Post Road, where it is embedded in a strip mall. As the two brothers went to pray, Halpern hung back, suddenly able to see his own family members praying centuries ago at a synagogue in Europe, few material possessions among them.

“And it was just this rare moment of transcendence where you realize, like, we have so much more connectivity than we realize,” he said. “Their family could be my family.”

He told the audience one more anecdote, about a family member who voted for and supports Trump for pro-Israel reasons, and has not been pleased with Welcome To The New World. Halpern thought of him when the shooting in Pittsburgh took place last week. He pulled out Martin Niemöller’s “First They Came For The Socialists”—a quotation by a man who supported the Third Reich, until he realized the extent of its paranoia and grab for state power. The words echoed through the room.

“I feel such antipathy towards this relative, who had such a cowardly and short-sighted view,” he said. “That must not be us.”