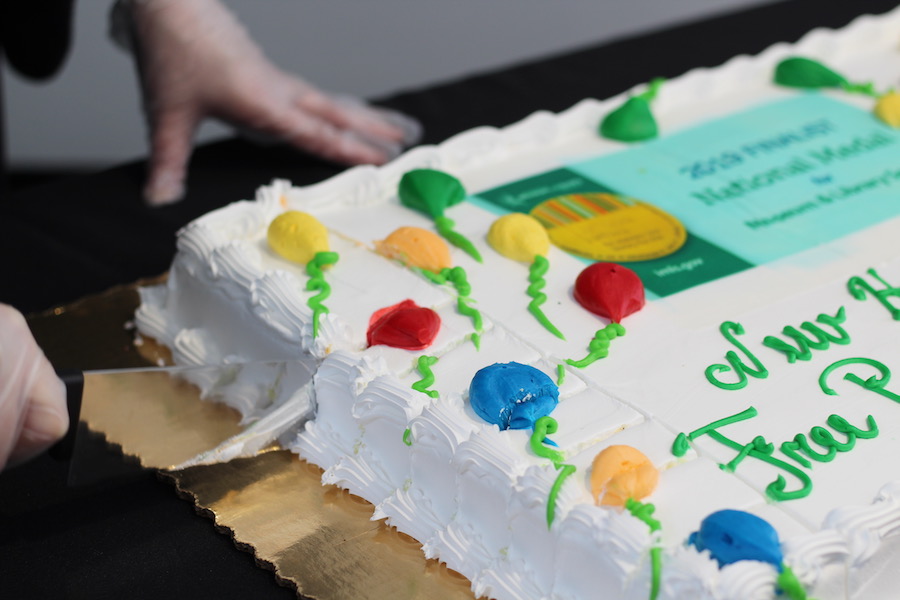 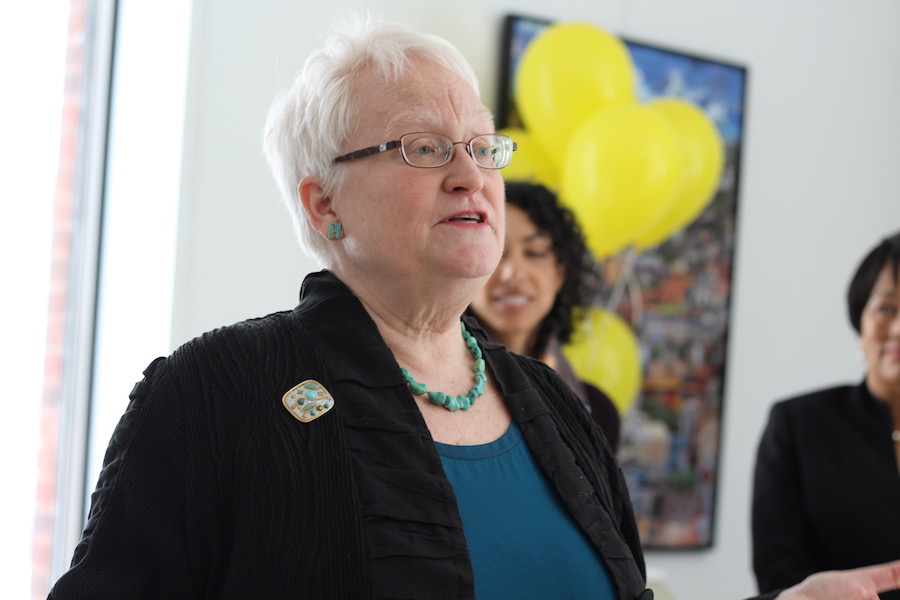 The New Haven Free Public Library hasn’t scored the nation’s highest library honor yet. But it’s officially in the running, and that’s reason enough to celebrate.

Tuesday afternoon, over 20 NHFPL patrons, staff, and board members gathered in the library’s G Cafe outpost to celebrate the organization’s place among 30 finalists for the Institute of Museum and Library Services’ (IMLS) National Medal for Museum and Library Service, awarded each year to “institutions that make significant and exceptional contributions to their communities.” Festivities included a library-wide “social media day” across all five branches, with chances to share out personal library experiences, watch NHFPL testimonials, and eat sheet cake.

The winners—five museums and five libraries—will be announced in early May. Read about all of the finalists here. Because President Donald Trump has placed the IMLS on the chopping block for the third year in a row, library staff also took Tuesday as a reminder to advocate for the agency, which distributes several grants to libraries and museums throughout the year.

In a short series of remarks at the Ives Branch, City Librarian Martha Brogan credited U.S. Sen. Chris Murphy with encouraging the library “to dare to apply,” in the form of a nomination last year. In the application, she and staff first wrote about the history of the library—a building established in 1886 by city charter, to fill the needs of New Haveners who belonged to neither Yale University nor the Young Men’s Institute Library. Brogan praised the library’s five branches, noting that each (starting with downtown’s 1911 building) is now over a century old.

“We really recognize that they are the key locations for many neighborhoods out in the community,” she said. “And in a way, we’re all part of the same tree, depending on what community you live in.”

She added that the application emphasized the library’s tens of community partnerships, highlighting its “READy for the Grade” program with NewAlliance Foundation, ongoing collaboration with Long Wharf Theatre, now in its seventh year, and new Ives Squared makerspace and innovation commons.

“It’s not one year, it’s a whole history and legacy that continues to evolve and make itself present today,” she said. 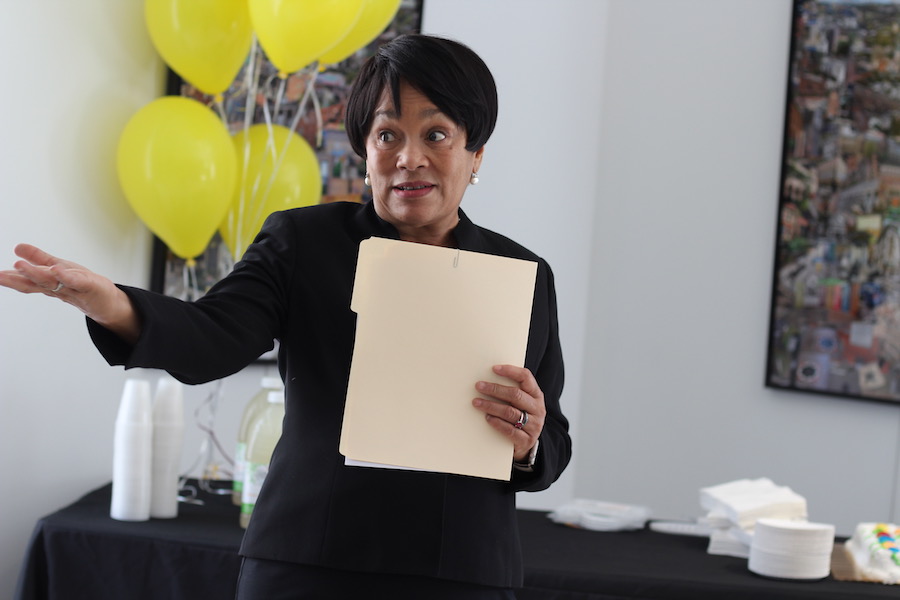 Speaking in between Brogan and a much-anticipated cake break, Mayor Toni Harp thanked Brogan for her tenure as New Haven’s first woman city librarian, praising her “energy and passion” and capacity for advocacy. She recalled a day many years ago, when she was still working at the Cornell Scott Hill Health Center. Because the center started work at 8:30 a.m., she assumed the library did too.

So she was shocked, on a day that had her running to the local branch, to see a long line forming outside as people waited for the 9 a.m. opening. It was then she realized that the library played a much bigger role than she’d initially understood. She suggested that it has since opened its doors even further, adapting to the digital age with not just more computers and free computer classes, but also a tinker lab that includes a 3D printer.

“We should definitely win the medal and if we don’t I’m gonna be mad,” she said to a smattering of laughs. “I’ve always believed that in a democracy, the collective will of an informed electorate could and would steer a just and moral society. As a function of that belief I have always supported libraries, because that’s where people always have ready access to important information. It’s where people become the informed electorate.” 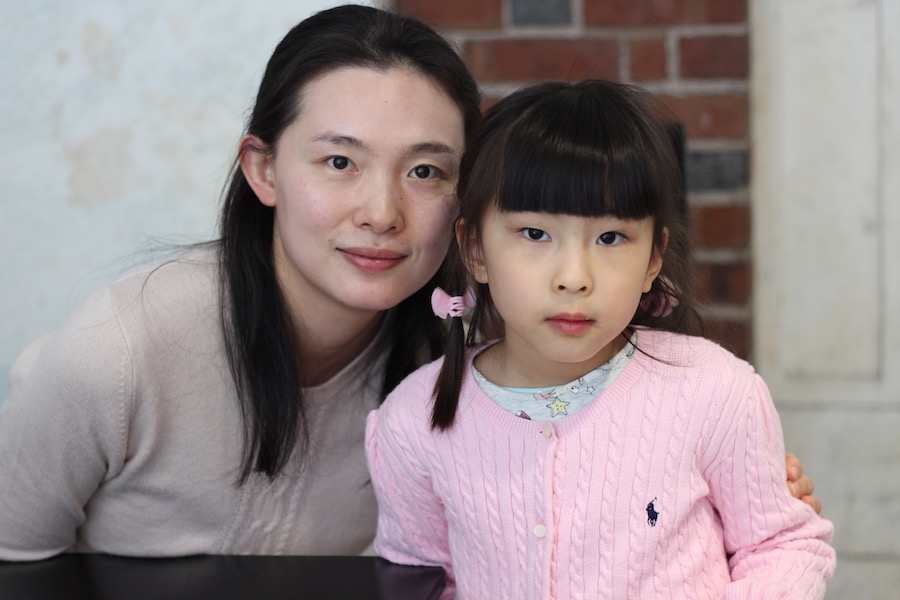 Her words echoed as Board Chair Shana Schneider took a brief survey of the room, asking attendees to raise their hands if they’d ever used the library, and clapping once every hand was way up in the air. But it was those who gathered unexpectedly, some sitting at tables near the back of the cafe and others jogging to the front for cake, that spoke about the library’s role in their own lives.

They included Zhe Fu, who moved to New Haven from China when her husband landed a 10-month fellowship at Yale, and she was left to figure out childcare. When they arrived, she said she was lonely, unsure where to go with their young daughter during the day. Then she found the children’s section at the NHFPL’s main branch. Now, she said that she and her daughter Jasmine—that’s an English name she’s adopted after the Disney princess—spend between three and four hours there each day.

There was long time patron Charles Sanders, a self-proclaimed "library person" who has been coming almost every day for 12 years to access the computers downstairs, where he researches law, psychology, and psychiatry. 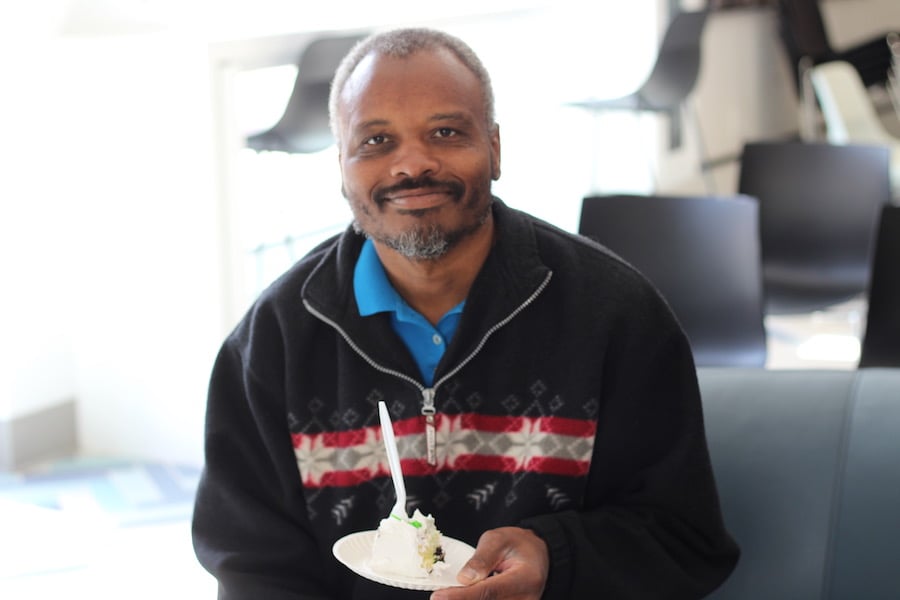 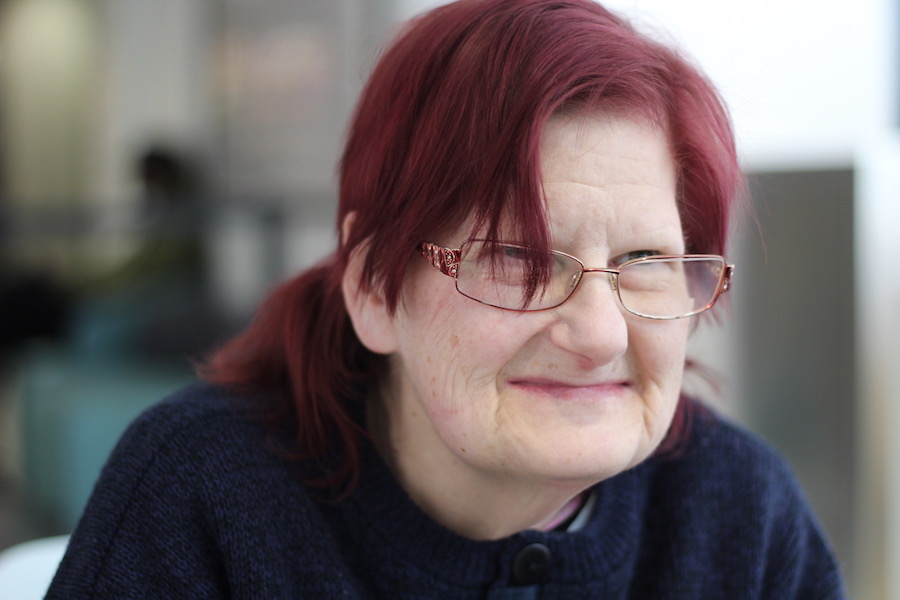 Or Jacqueline Skaarba, who moved to New Haven last month as she struggled with homelessness, and heard that the library might be a good place to get out of the cold during the last months of winter, and the oppressive heat still to come in the summer. After spending her nights at a shelter on Grand Avenue, she said she comes to the library “just about every day” to spend the day reading. She especially likes books on Christianity, which she said she used to read with her son every day, and now reads in his honor because they are separated for the first time in 32 years.

“I love coming in here and seeing all the different types of families and children,” she said. “I’ve been all over the place, and I can boldly say there is a different way people treat you in New Haven. It’s amazing.”

To watch more testimonials from the library's "social media day," click on the videos below.