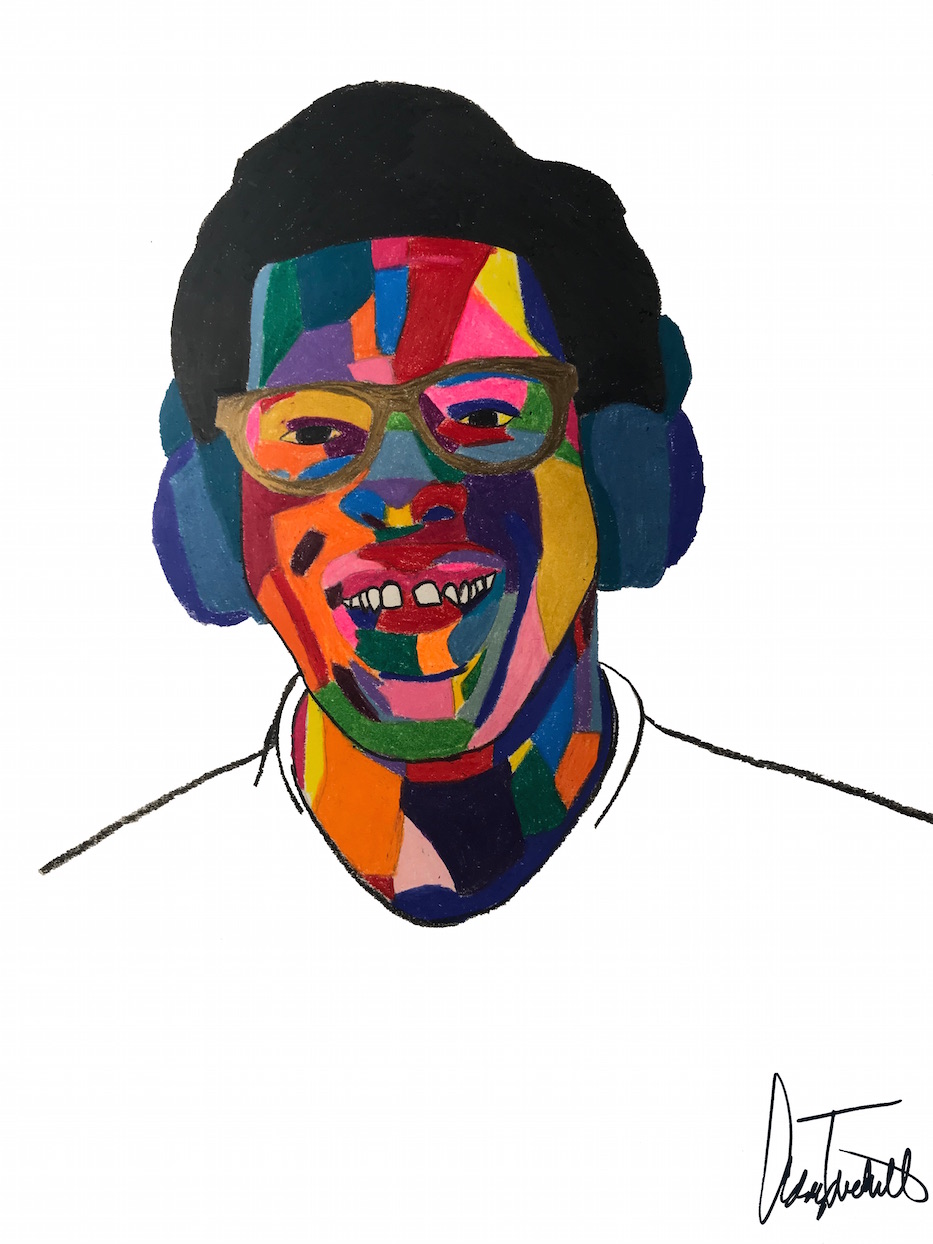 The cartoon begs a viewer to come closer. A man lifts his hands to his chest, frozen momentarily in time. Beside him, a young woman cocks her head, and raises her hands to her shoulders. They’re deep into the history of Juneteenth. He’s just gotten to the fact that chattel slavery didn’t officially end until 1865—two and a half years after Abraham Lincoln issued the Emancipation Proclamation—when she cuts in.

“But why did anyone care?” she asks.

“Because real freedom means that all of us are free!” he answers.

The man pictured is Justin Farmer, a member of Hamden’s Legislative Council who is running to represent Hamden, Ansonia, Beacon Falls, Bethany, Naugatuck, Derby, and Woodbridge in the Connecticut State Senate (“instead of gerrymandered, I say diverse,” he joked about the district). In his grassroots bid for state office, he has received an unexpected creative assist: young artists who are lending their skills to his political fight.

Farmer faces Democrat Jorge Cabrera in the Aug. 11 Democratic primary. The seat is currently occupied by State Sen. George Logan, a Republican who grew up in New Haven and now lives in Ansonia. 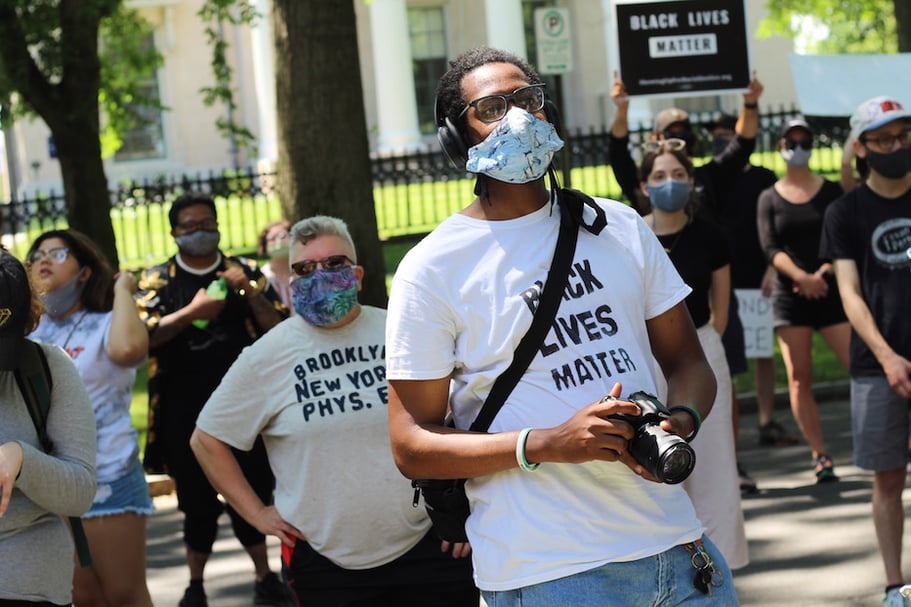 “I think it's another way for people to engage and be part of the political process,” Farmer said in a recent phone call. “We're trying to show an outside perspective. What's more grassroots than having community members submit their art? If you hear me speak at a rally, at a protest, at an event … I want to know how you see our campaign. These images have been amazing and inspiring to me.”

The idea came from Farmer and 18-year-old Mariam Khan, a first-time voter who is working as Farmer’s deputy campaign manager and chief communications specialist. Earlier this year, Khan put out a call on Instagram for artists to share work related to the campaign. As the leader of Connecticut PERIOD, which has been distributing free menstrual products to people during COVID-19, she’s gotten used to using social media to get the word out.

But this was new territory, made more complicated by the limits of COVID-19 in an election year. Farmer’s campaign office is a Slack channel, rather than a storefront or even his home. The campaign has been running weekly phone banking on Zoom. His Instagram account, which has a couple thousand followers, is sometimes the fastest way to get in touch with him.

It’s a strategy that makes sense: his pitch is often tailored to young voters. At 25, Farmer is the oldest person working on his campaign. 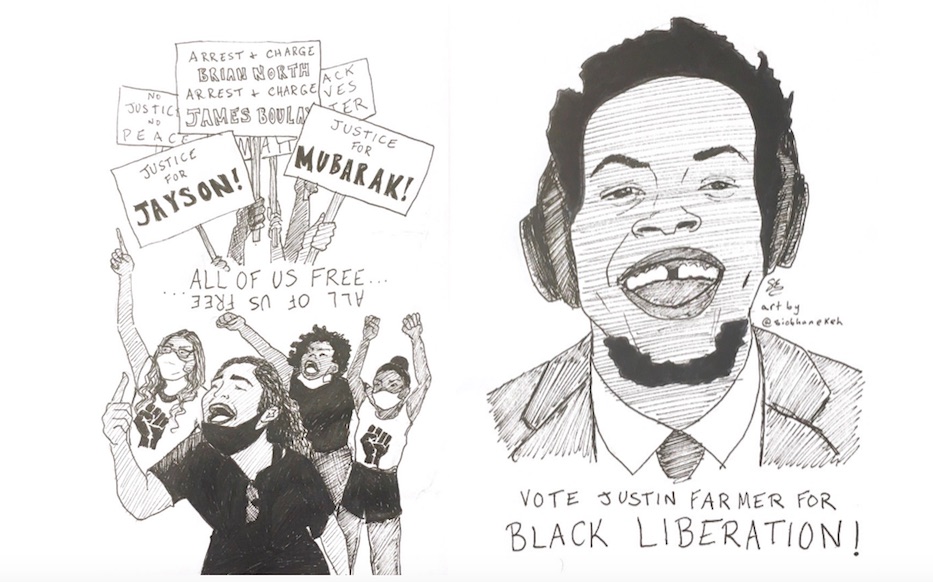 Then submissions started rolling in. Almost all of them came from young, queer artists of color, first-time voters who had seen Farmer’s policy platform and gotten excited reading his stances on LGBTQ+ issues, reproductive rights, mass incarceration, public transit and the Green New Deal. Others had heard him speak at rallies—for the environment, for Black Lives Matter, for an end to police brutality—and started imagining designs while they were still in the streets.

Like his campaign logo—a blue-and-white profile of Farmer, set against two seafoam green bars—almost all of the art features Farmer’s signature look: a striped tie, wide, angular glasses and noise-canceling headphones to help him cope with Tourette Syndrome.

“This is really a community campaign,” Khan said. “We could get people to make official graphics, but when you have a community of so many young, local artists—artists of color, LGBTQ artists, artists who were doing this work already—giving them this platform for their work and showing that this is a campaign by people for people is incredibly important.”

One of those artists was Siobhan Ekeh, a rising senior at Jonathan Law High School and the Educational Center for the Arts who saw Farmer speak at a number of rallies and marches, and has since become a budding political organizer herself. In June, she designed a five-part cartoon around prison abolition, Black history, and Black and queer liberation that dropped on Juneteenth.

While the images are meant to pull from Farmer’s platform, the designs are completely her own. She said she lives by Toni Cade Bambara’s advice that “the role of the artist is to make the revolution irresistible.” It's her motto for most work projects too.

“The infrastructure is already there,” she said in a recent Zoom call. “The ideas are already there. What art does is it grabs people, and makes them think about it in a different way. Or it makes people interested in things they otherwise wouldn’t be interested in. It’s kind of a sneaky medium for taking in information.”

“That’s the role of artists,” she added. “To change the way people think.” 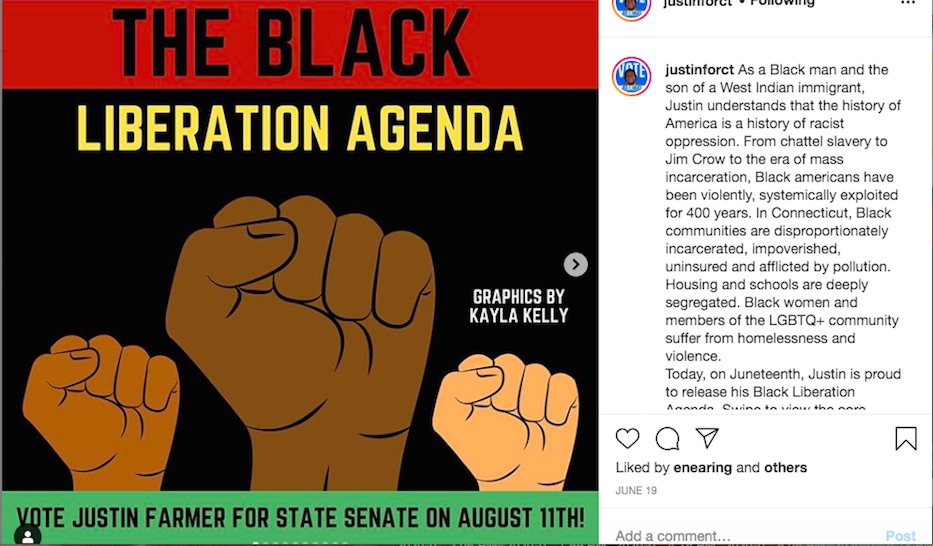 Last month, Windsor-based graphic designer Kayla Kelly also jumped onboard, just as Farmer was putting together his platform for Black liberation. A rising sophomore at American University, Kelly had already been designing “Politics 101” graphics for her own Instagram followers as a teaching tool.

In a series of weeks, she has designed infographics for both Black and LGBTQ+ liberation for Farmer's team. In the first set of images, three fists punch the air, steady and resilient. In a series of panels that follow, graphics accompany text that outlines defunding the police, advocating for Black queer people and Black women, ending residential segregation, closing the opportunity gap, and recognizing health disparities that include environmental racism.

In the second, which went live on the last day of Pride Month, Kelly has come back with a brighter, punchier palette. Among rainbow-colored bands, smiling families with their kids, transgender athletes and blue-and-pink pride flags the size of post-it notes are calls to end disproportionate LGBTQ+ youth homelessness, stop legal and verbal attacks on trans athletes, and improving access to affordable, stigma-free healthcare. 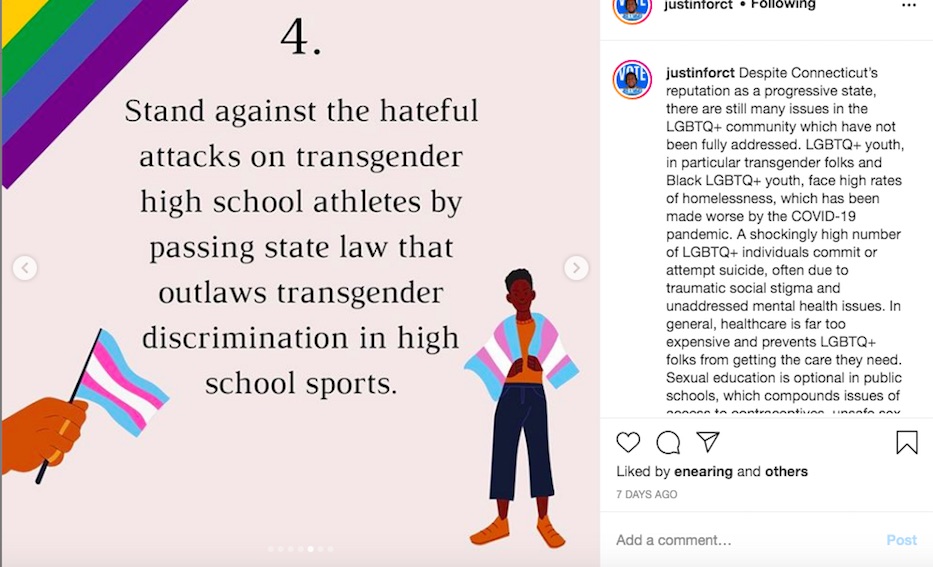 “I feel like nowadays, academic language can be very limiting for those who want to expand on their language about politics,” she said in a Zoom call. “Politics can seem like a very daunting subject to get into. With these infographics that I create, these graphics, it’s more digestible for folks to absorb. I guess that’s my strategy.”

She is also drawn to Farmer on a personal level: she is a Black woman with a speech impediment, and has been moved watching him speak so openly about Tourette Syndrome—and about liberation for all communities. While she is outside of his district, she does plan on voting in the August primary, which comes just days after her 18th birthday.

“He wants to actually be involved with marginalized communities, and that speaks volumes to me,” she said. “With these politicians nowadays, it feels so performative. But with Justin, he actually is a member of those communities. It feels like an old friend trying to run for state senator. That’s beautiful to me. I don’t feel that he’s trying to do it for votes or clout. It feels very genuine to me.”

Farmer is also getting an assist from artist Addy Twohill, a rising senior at Hamden High School and aspiring lawyer who met him last year, when he spoke to her government class. After hearing him speak, Twohill found out more about Farmer, including his hours of advocacy for students and parents as the town cut millions of dollars to the Hamden Public Schools.

“What stood out to me is he isn’t trying to please people,” she said. “He’s not gonna do this middle of the road stuff to get voters. He stands for what he stands for, and he stands for it proudly.”

In an image that she submitted in June (pictured at left), close to the end of Pride Month, Farmer appears in a white shirt, shoulders squared against a white background. Everything from the neck up is rendered in bright, kaleidoscopic color. The headphones are two tones of brilliant blue. Farmer opens his mouth: it seems like a laugh slips out.

“To me, the most important thing about any piece of art is how it can make people feel,” she said. “And then you can hit them with the articles, and the quotes, and the policies and the platforms.”

Going forward, Khan said she and Farmer are still interested in hearing from new artists. With four weeks to go before the primary, the campaign is focusing on talking to and registering voters, and getting absentee ballots to those who cannot be at the polls, for reasons that range from work to the COVID-19 pandemic.

“It really gives me hope that there’s a future in art, and art in politics,” she said. “A lot of the work we’re doing is so, so heavy. We’re talking about prison gerrymandering. We’re talking about the Black Lives Matter movement. There’s so much trauma and pain attached to that. And I think that art is one of those forms where it’s just about the emotion, instead of arguing with someone. That artwork is there for you to put out without any question.”