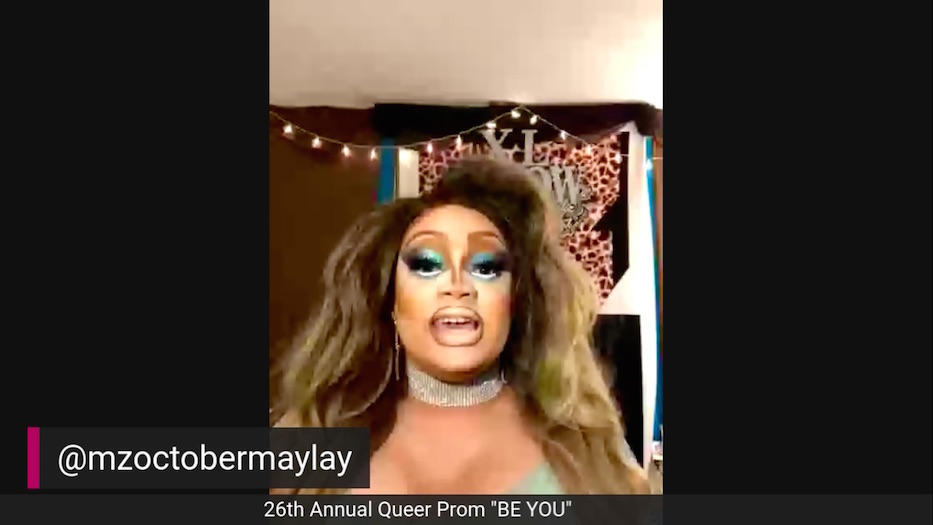 It was somewhere between 7:30 and 7:45 p.m. when Nicki Minaj blasted through the speakers. Outside, the sun had started to sink into the wide Connecticut sky. Indoors, Minaj hit the hook—Starships were meant to fly/Hands up and touch the sky!—and kept going.

On cue, pink streaks appeared outside before sunset. It became impossible not to dance—even if listeners were doing it alone from their couches, desks, and living rooms.

Thrumming bass, multiple drag performances, and at least three different digital platforms underscored Connecticut’s 26th annual Queer Prom, presented virtually for the first time ever due to COVID-19. The event, titled “Be You!” featured several Connecticut queens and was dedicated to the class of 2020. It came during several statewide online Pride events and the New Haven Pride Center’s week of action.

It was organized by the Hartford Gay and Lesbian Health Collective, PFLAG Waterbury, New Haven Pride Center, True Colors, OutCT, Ridgefield Pride, CT Pride Center, Q.U.E.S.T., Stonewall Speakers of CT, and Triangle Community Center and emceed by Hartford-based queen Xiomarie LaBeija. Over the course of three hours, she pivoted from Facebook Live to YouTube to Twitch, while chatting with performers from across the state and the Imperial Sovereign Court of All Connecticut. 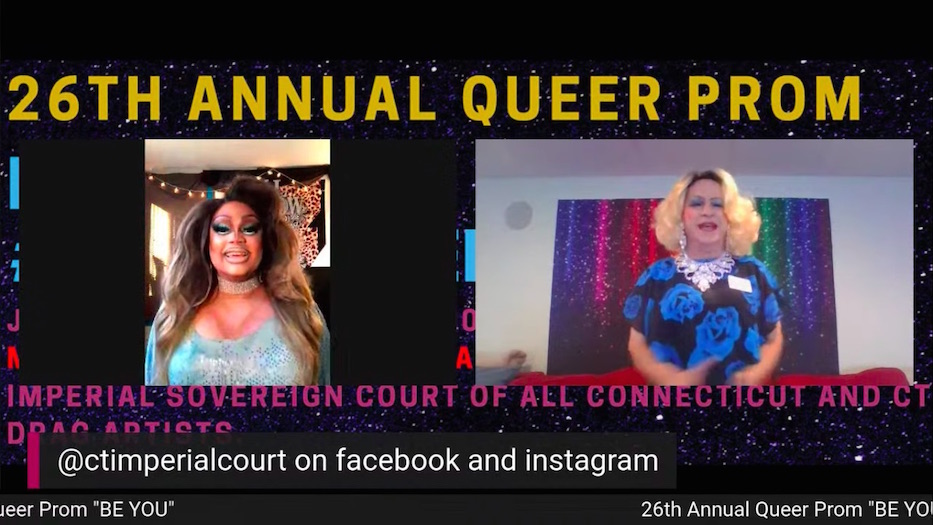 “We are here to celebrate,” she said at the beginning of the night. “So everyone, please say love! Make sure you say love. Let me hear it out louder. Everyone say love. We are here, honey, to show love to one another, to our community, to come together.”

In Hartford, Queer Prom was founded in the mid-1990s by the Hartford Gay & Lesbian Health Collective. Had it not been for COVID-19, a physical celebration would have continued there this year. For the past two years, New Haven’s own Pride Prom has taken place at the United Church on the Green’s Temple Street Parish House (read more about that here and here). The events are designed as proms for teens who might not feel comfortable at their own, heteronormative school proms, or in their own homes.

This year, statewide collaborators started thinking about how to hold onto the spirit of the night when dancing, singing, sharing food and gathering for packed drag performances were no longer tenable due to the pandemic. The plan: put a DJ and several Connecticut drag performers into a three-hour digital set, and pray for it not to get shut down because of music rights.

There have been similar celebrations across the state this month, from a virtual PRIDE launch in New Haven to West Hartford’s virtual PrideFest last weekend.

Patrick Dunn, executive director at the New Haven Pride Center, noted that LGBTQ+ youth may be in greater need of affinity spaces this year: many are uniquely isolated during COVID-19, and in home situations where they are not out or feel unsafe or at-risk.

Often for the first time in their lives, they have been without their teachers, their physical classrooms, and their friends for months. According to The Trevor Project, COVID-19 has had serious effects on the mental health of LGBTQ+ youth, some of whom are already at higher risk of depression, anxiety and suicide. 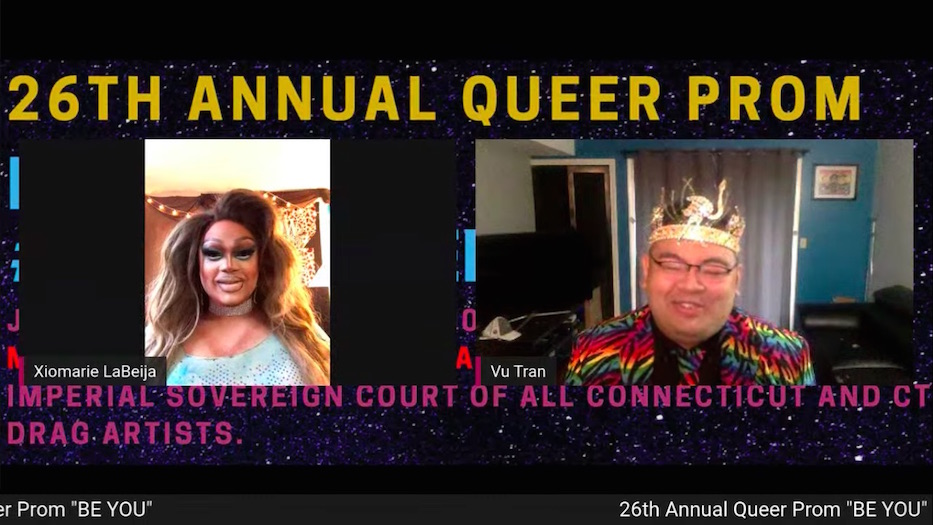 “The thing that has really come to the surface during COVID has really been that for a lot of LGBTQ youth, and despite bullying, school is a safe space for them,” Dunn said. “Sometimes safer than home. So creating a safe space for youth when one of their spaces is not safe is a vital lifeline—even if it’s only a few hours. Even if they’re just sitting there with their headphones in.”

Over three hours, LaBeija carried the celebration, as kings and queens appeared on screen and, almost as quickly, Facebook and YouTube caught on and took away the content. Early in the evening, she greeted an invisible audience, not a hair out of place. A sequined blue top stretched across her chest and shimmered beneath a thick, glinting rhinestone collar.

As she spoke, she focused on the year’s theme—being oneself. In her own work, including the relatively nascent XL Show, she has been vocal about the importance of non-white queens performing in the state.

“Representation matters, and that is the real tea in our community,” she said. “We have to make sure we are being as genuine and as us in the community in these times.” 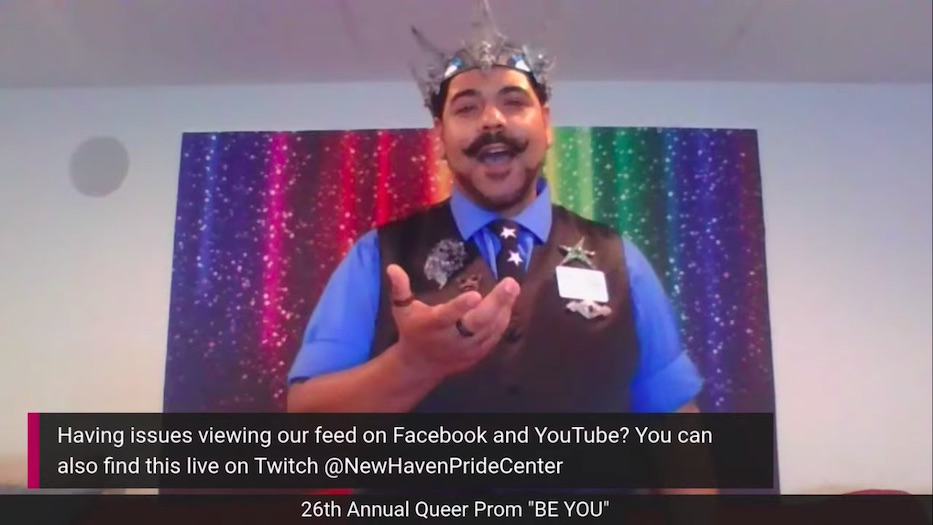 She also made smalltalk with performers, trying to bridge the distance. Performing before a glittery rainbow poster for the Imperial Sovereign Court of All Connecticut, Nico Starr Shock greeted her, smiling with a warm, almost-shy sort of grin. Stephen Scaccia’s voice oozed out of screens across the state, curled around Kelly Clarkson’s “Dare You To Love.” Shock’s hands floated to the lyrics, signing the chorus.

After the performance, he and LaBeija tossed around advice they would have given to their high school selves. Even when he got serious—"I’m just trying to survive,” he told her—the smile never disappeared from his face. He recalled the start to his performance career, when he wasn’t yet sure that it would stick. 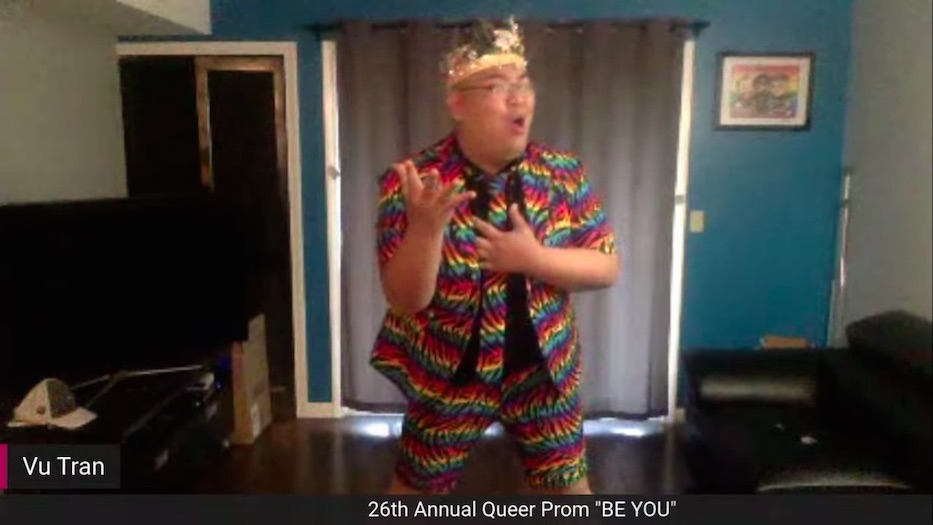 Other performances provided a much-needed escape. Imperial Crown Prince Vu Tran froze time—or something like that—as he sprang up in a zebra-striped, rainbow-and-confetti-patterned shorts suit to perform a mashup of “Into The Unknown” from Frozen 2.

Around him, the blue paint, grey curtains and mundane furniture of the room became irrelevant, suddenly too small to hold the stretching arms, air-punches, and forward strides. For a few minutes, Princess Elsa banished the specter of COVID-19. A baseball cap, left alone to Tran's left, seemed comically out of place in this magical landscape.

“I miss you so much girl,” Tran said to LaBeija before he disappeared from the screen. “You’re making me feel amazing right now.”

Other performers brought fierce numbers that spoke straight to the theme. After switching platforms, Robin Fiercè, Rory Roux Lay-Hart and Mz. October May Lay brought the house down. As the first notes of “Feel It Still” drifted into the frame, Frankie M. Cyanide whipped out a pair of prosthetic hands from behind their back, wove them in between each other, and began a routine from their front porch.

After the performance ("my thumbnail came off, but otherwise that was okay!” they said through a smile) they recalled how happy they had been after cutting their hair short for the first time. Now, they aren't miffed when someone asks why they're wearing makeup or eyes their chopped-off cut in the middle of the afternoon.

“Be you,” Cyanide said. “You will be happier if you are true to yourself.”

LaBeija wanted to know if Cyanide had any more advice before the next DJ set. They nodded, moving their mouth from side to side.