In Praise Of All Things LIT

IfeMichelle Gardin has been dreaming of an in-person literary festival in New Haven for years. This weekend—and in the midst of an ongoing global pandemic—it will finally become a reality. Along the way, she’s found a city in the midst of a cultural Renaissance.

Gardin is the founder of the Elm City LIT Festival, a “celebration of all things LIT” that will bring together poets, playwrights, novelists, budding hip-hop artists, puppeteers and storytellers this weekend Over two days, she and team members Sha McAllister, Emalie Mayo and Julius Stone plan to roll out some 20 events, with dozens of artists.

“I feel like this is a Renaissance time in New Haven,” Gardin said during an episode of “Arts Respond” on WNHH Community Radio. “It’s a very vibrant time for artists … there’s so many opportunities. And there’s so many artists out there who need these opportunities, that have been in the game so long.”

The in-person event has been years in the making. In 2019, Gardin started a book club out of the squat, nondescript police substation on Whalley Avenue. She saw a need: not enough New Haveners were sharing their stories with each other. She was inspired by the literary celebrations that she’d witnessed in New York City, from the the Brooklyn Book Festival, spread across whole buildings because it was so large, to the Harlem Book Fair, which stretched for  seven city blocks, to the Bronx Book Fair and Queens Book Festival.

When she moved back to New Haven to care for her mother in 2018, "I found out there's so many writers," she recalled. The book club grew from there. "There's so many local writers. And poets. It's just been wonderful."

Last year, she was planning the inaugural LIT Fest at the Connecticut Center for Arts & Technology (ConnCAT) when Covid-19 hit New Haven. The city shuttered. Within weeks, she was working with Baobab Tree Studios to get a podcast off the ground. Instead of putting the festival on hiatus, Gardin took advantage of the distance, pairing local authors, poets, playwrights, Black book club founders and book nerds from outside New Haven. 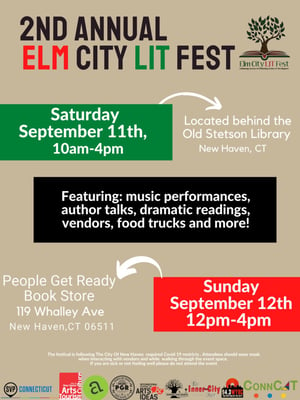 She is quick to say she hasn’t done it alone, and often praises McAllister and Mayo for helping keep the festival’s mission afloat. Last September, LIT Fest held its first official festival with two days of programming online. The virtual pivot paid off, Gardin said—there were attendees from across the city, the country, and the globe.

It opened her to new literary and institutional relationships in the community that she has continued to build, she said. She praised the Community Foundation for Greater New Haven, through which she has participated in the neighborhood leadership program, as well as ConnCAT, Long Wharf Theatre, and the Arts Council of Greater New Haven among others.

This year, Gardin looped in Stone—a programming star who also happens to be her cousin—after finding out that Stone had moved back to New Haven during the pandemic. With McAllister and Mayo, the four built a festival that is highly interdisciplinary, from poets and authors to spoken word artists who leave the mic sizzling every time.

The sheer variety of the festival is meant to open people to the breadth of Black literature and the multiplicity of a diaspora, Gardin said. Saturday’s events, planned for the plaza behind the old Stetson Library, start with DJ Dooley-O and then dig into puppetry, poetry, music and storytelling.

In part, Gardin sees the festival as knitting together statewide talent, which can sometimes feel siloed. But there are also some big names that attendees may recognize from beyond Connecticut, including writers Jael Richardson, Deesha Philyaw, and ​​Nicole Blades. Sunday’s slate of events at People Get Ready Books include a keynote address from Lucy Hurston, the niece of literary pillar Zora Neale Hurston, in conversation with Bill Foster.

"We want to give people the experiences of realizing that literature, and literary arts, and literary artists are across all boards," said Stone, who had a literary revelation when a friend gifted them Giovanni’s Room many moons ago. "Right? They include actors, screenwriters, playwrights, storytellers, music artists. Like, it is all encompassing. Every time we sit down to write something, we are being literary artists."

As it continues to bloom, Gardin said that she’d love to see the festival’s collaborative footprint grow, including with Yale University and the ​​Windham Campbell Book Prizes. For her, LIT Fest is many things—a way to amplify and support Black writers and writing, a growing bridge between town and gown, a reminder that there’s profound talent in Connecticut, and it doesn’t come from lily-white reputation that the state often has.

"I love literature, of course, African-American literature, and I wanted to start something," she said. "And so here we are with LIT fest ... it came out of a desire for everyone to get better knowledge of the richness of literature of the African-American diaspora. Because we don't know enough about each other's stories, to me. We just don't.”

Listen to a full interview about LIT Fest from WNHH Community Radio, one of our media partners, in the video above. LIT Fest runs Sept. 11 and 12 at 200 Dixwell Ave. and People Get Ready Bookstore. For more information, including panels and times, click here.