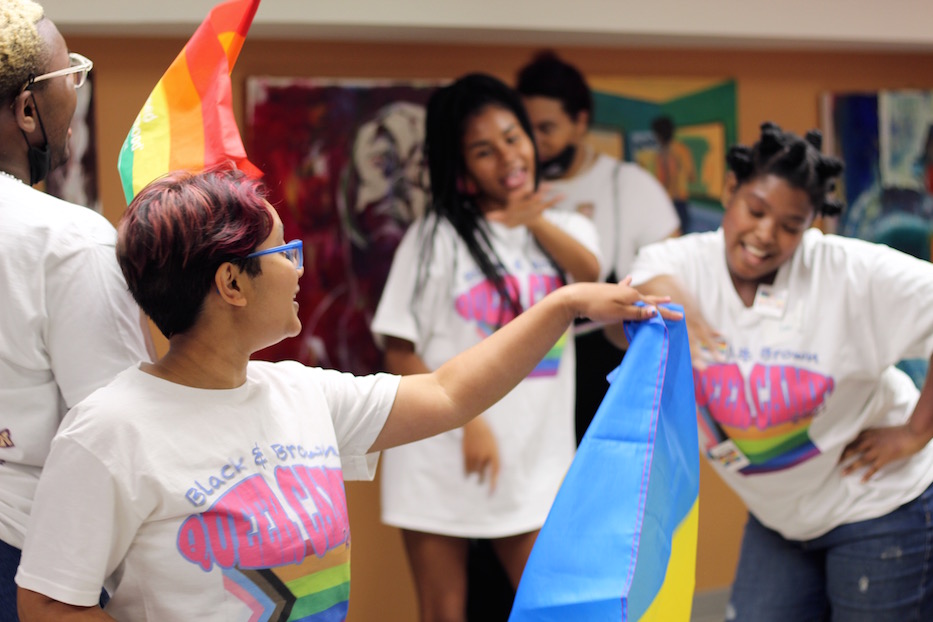 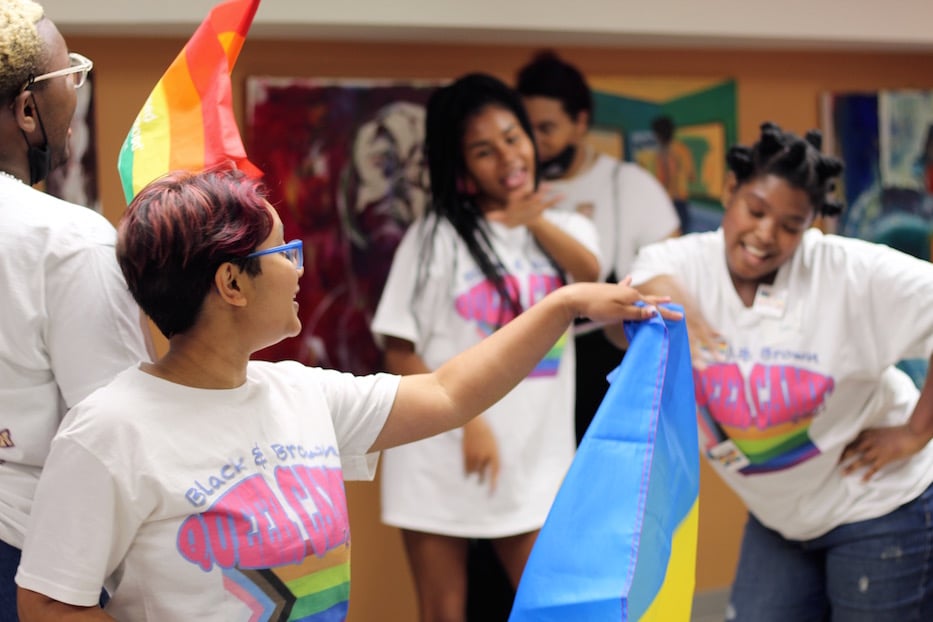 A lip sync contest had exploded in the belly of the New Haven Pride Center. Lady Gaga’s “Born This Way” pumped through a speaker. At first, it seemed like Jaeana Bethea had the upper hand. She shook her shoulders and leaned forward to the words, each movement precise. Then Adrian Huq pulled a pansexual pride flag tight around their shoulders, and it became a superhero cape. CJ King whipped a miniature pride flag out of his overalls, and it was all over.

Gaga belted from the speaker—Don't hide yourself in regret/Just love yourself and you're set!—and Huq nailed every word. They and King slapped hands in a triumphant high-five. Applause and cheers rippled across the room.

That sense of buoyancy defined this year’s Black and Brown Queer Camp, back in person after the pandemic pushed it online last year. A collaboration among Citywide Youth Coalition (CWYC), Black Lives Matter New Haven and the New Haven Pride Center, the camp has entered its fourth year thanks to advisors Jahnice Cajigas, ala ochumare, and Juancarlos Soto. 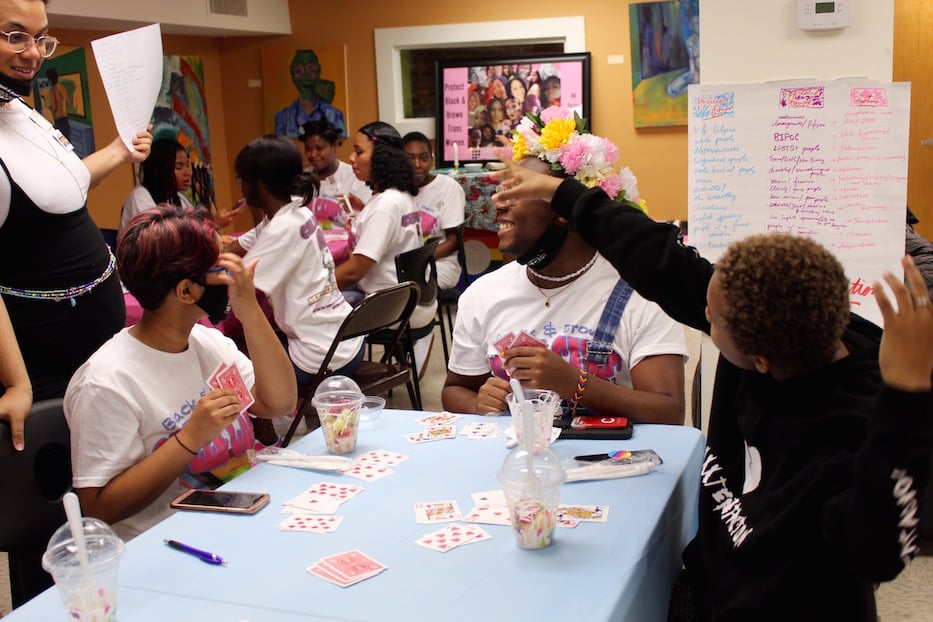 Top: Cajigas with Huq, King, and Young. Bottom: Juancarlos Soto and ala ochumare during a reading.

This year, it returned to the Pride Center with lessons on queer history, political organizing,  mutual aid and art making. Cajigas, director of organizing for CWYC, said that counselors built the program with a particular focus on self-care, with activities that ranged from voguing tutorials with New Haven-based dancer Pedro Frappé to painting with Marshun Art.

“After a year and a half of two pandemics, it’s so good to have a time and space to come together, to celebrate life and be in community,” Cajigas said during a free moment last Thursday. “This year has been a challenging year for trans women of color, for queer people of color and for queer people in general.”

It is also personal for Cajigas, who describes herself as unapologetic in her advocacy. She said she is hyper-aware of the twin pandemics of Covid-19 and racism, both of which had her marching in the city’s streets while also teaching camp remotely a year ago. When she was designing the camp with ochumare and Soto, the three made sure to both expand the curriculum and have some literature that did not include the words “queer” or “LGBTQ,” because some of the young people at the camp are not out at home.

“We are protecting these young people before they even enter the space,” she said. 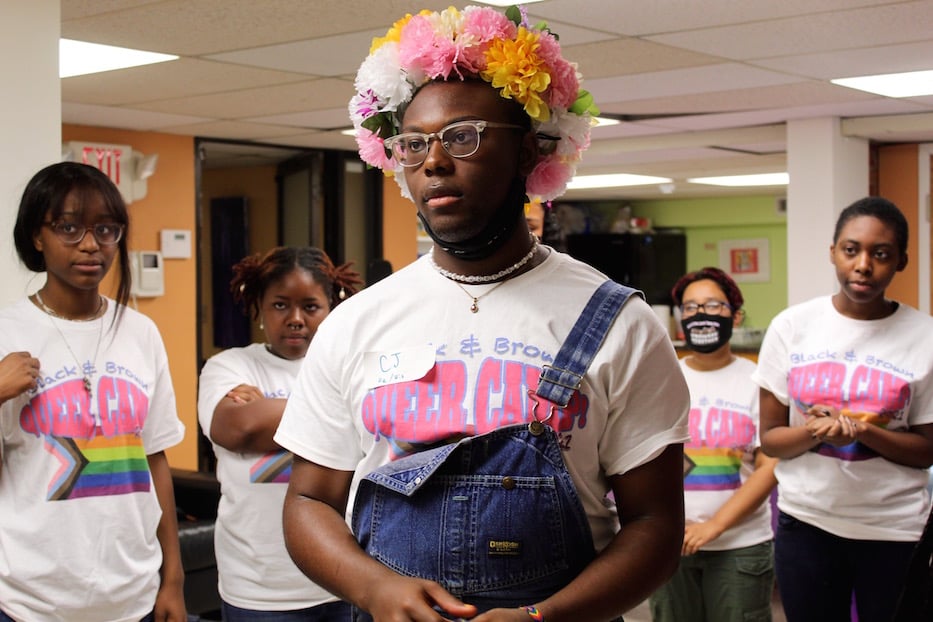 King: "This is a healing space.”

In the Center’s bright basement room, over a dozen young people fanned out across tables fitted with blue and pink tablecloths, nibbling fragrant arepas and comparing notes on their trips to New York City Pride and whether it was still acceptable to listen to Doja Cat. King looked up from a game of “Go Fish,” cocking his eyebrows beneath a flower crown. A seasoned veteran of Black and Brown Queer Camp, he said he was especially grateful for the space after a year of remote school and quarantine.

In New York, King is able to surround himself with other queer students and students of color. He said it’s a welcome change from ESUMS, a stem school where a teacher once disparaged him for wearing heels on his birthday. When the Covid-19 pandemic sent him home from his first year of college in 2020, he struggled with the sudden isolation. At school, is currently studying the relationship between the school-to-prison pipeline and increased police presence in New York. He was suddenly faced with the quiet of his West Haven home.

“During the pandemic, I think a lot of us experienced depression,” he said. “Being in this space—I learn so much every year. I think that spaces like this are so important because I come from a very religious, very conservative household … this is a healing space.”

At the Pride Center, he has found a local spot to step into self-expression safely. He pointed to the number of conversations around passing and untold Black and Latinx contributions to queer history that he can have with other youth. After three years as a camper, he plans to return next year as an advisor. He described going to this year’s Pride festivities in New York, which several campers did this year, as “almost religious or spiritual.” 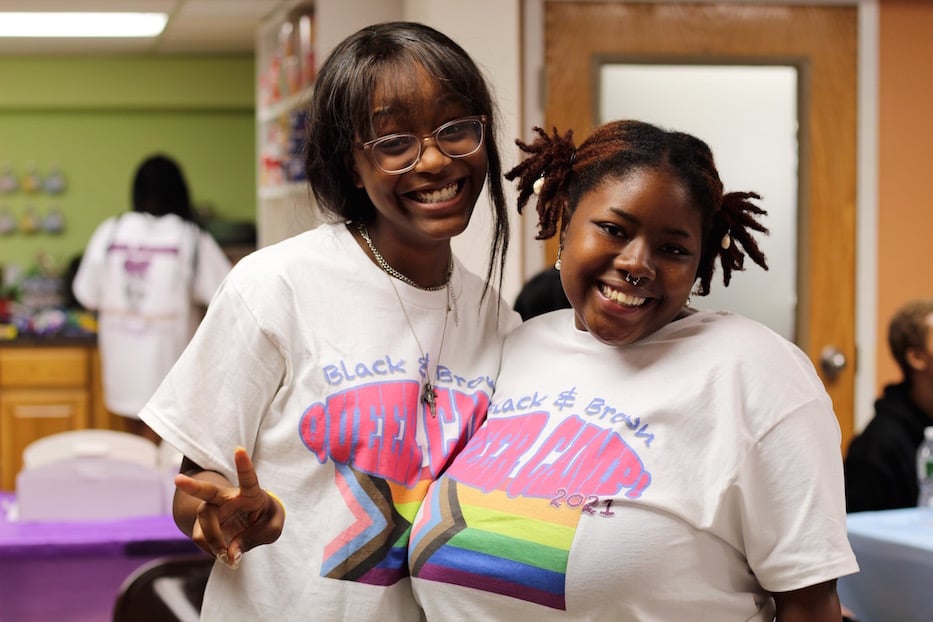 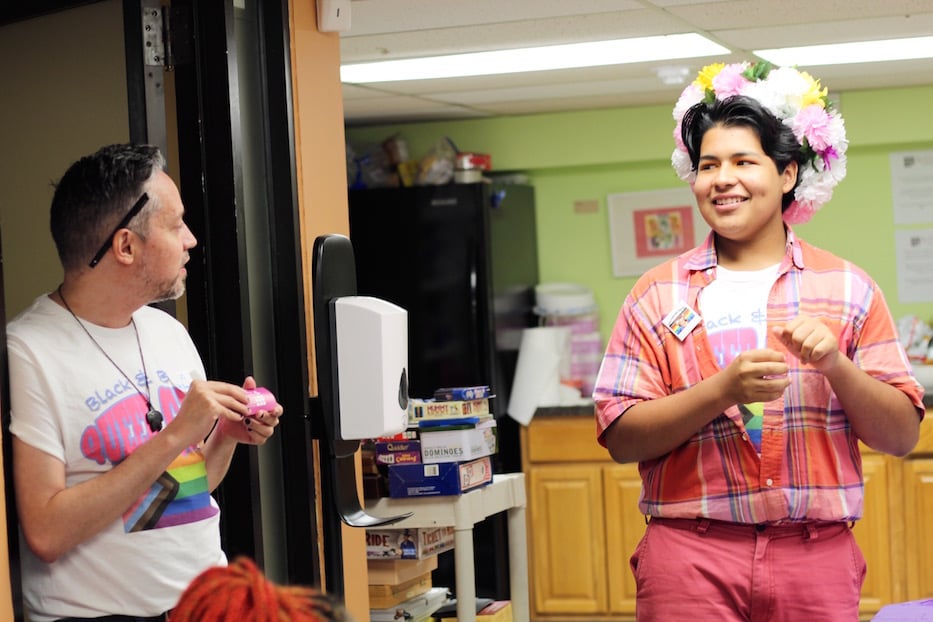 Top: Jada Fogle and Jamila Washington, who both graduated from Cooperative Arts & Humanities High School with an emphasis on creative writing this year. Bottom: Juancarlos Soto with Dave John Cruz-Bustamante.

Across the table, Dave John Cruz-Bustamante was savoring each moment, not ready for their first session of camp to end. A rising sophomore at Wilbur Cross High School, they came out last year and started looking for queer affinity spaces, particularly those that were nonwhite. They were amazed to spend the week learning about Gladys Bentley, Barbara Jordan, Ernestine Eckstein, Ava Betty Brown, Willi Ninja and others.

They said they were especially moved by the story of Frances Thompson, a formerly enslaved Black trans woman and anti-rape activist who testified before Congress in the 1860s. It left them wondering what other legacies had been wiped clean from their history books.

“There are not that many spaces that are really visible,” they said, reflecting on a discussion on happiness versus safety that the group held the day before. “We can be happy and safe here. All spaces other than these are cis/het spaces unless you’re told they’re not. Especially when you’re not white.” 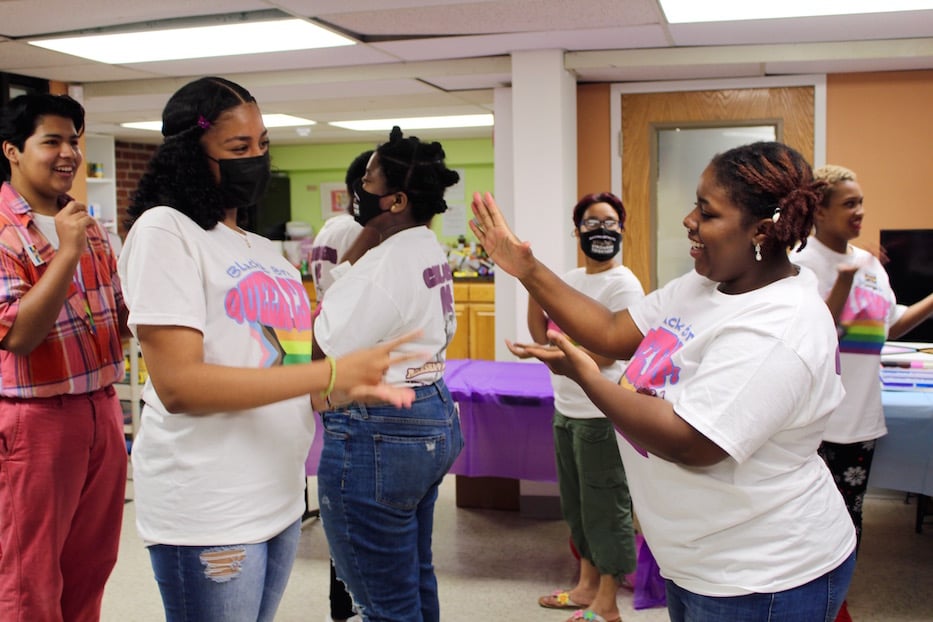 In a week, they’ve forged new friendships with fellow students including Akilah Young, a rising freshman at Cross who learned about the program through her mom. Young said it was the first time she’d been around so many other queer people who are her age. Since learning what it meant to be gender fluid last year, she’s been thinking about how her sexuality and gender identity relate to each other.

Like Cruz-Bustamante, she revelled in the history lessons, fascinated by the artistic legacy of Willmer “Little Ax” Broadnax, a Black trans man who made history for his work in the gospel music community.

Some of the history is also hard, Cajigas said: youth learn how many narratives are still untold, under-told or unwritten because they belong to nonwhite, non-cisgender people. At the back of the room, candles flickered on an altar to Black and Brown trans women. Faces looked out, eyes soft and young.

Beside it, newly minted Metropolitan Business Academy grad Karyme Baranda chatted with Southern Connecticut State University (SCSU) sophomore M. M., who is studying social work. M. said that she was motivated to go into the field because she can see a lack of representation—there are few queer social workers, and fewer who are Black women—from miles away.

“Black and Brown folks don’t really have a safe space most of the time,” she said. “You actually have a safe place here and a home here. I always learn about new people and new stuff in queer history.” 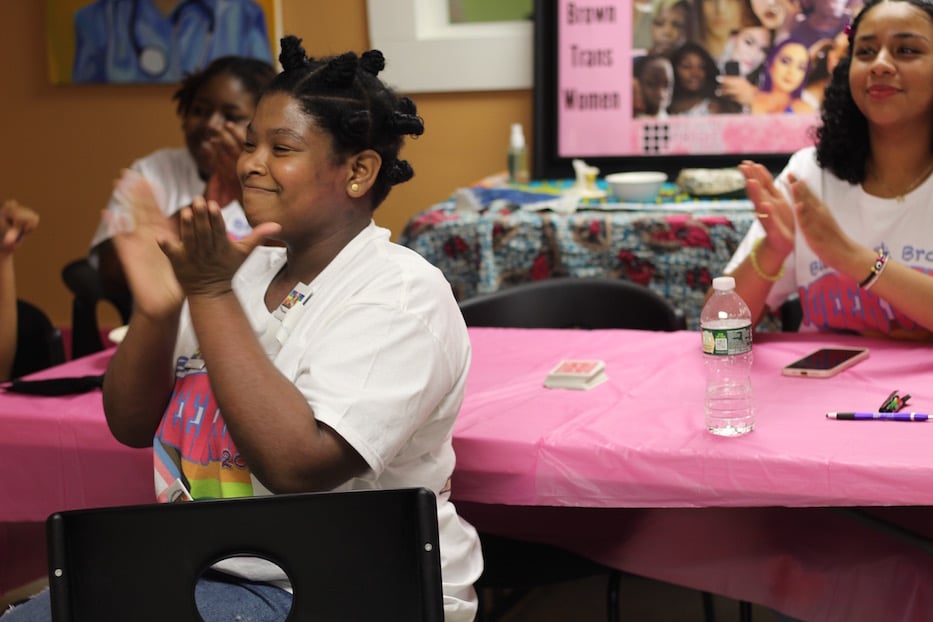 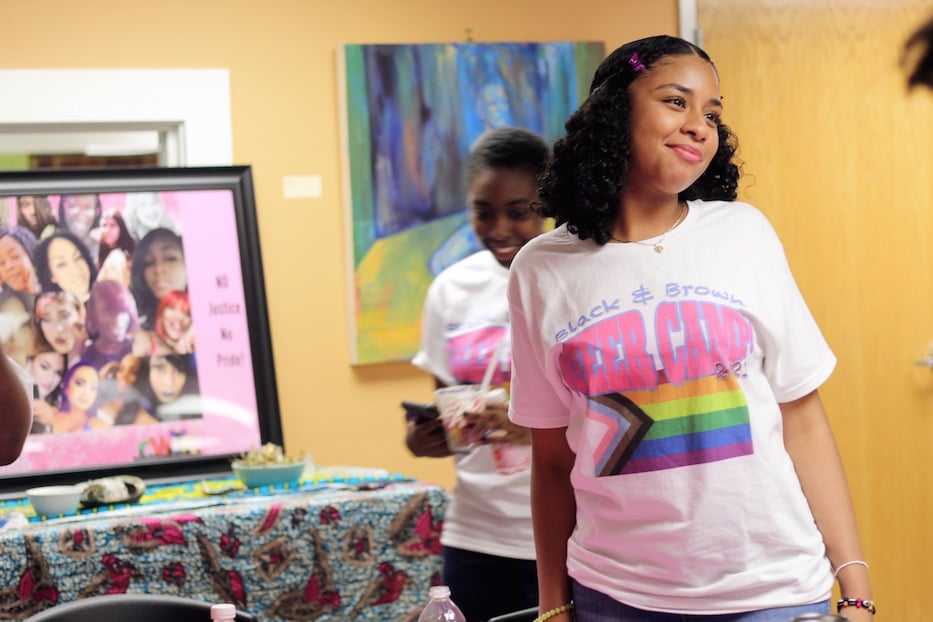 Top: Jaeana Bethea cheers on the other team after judges Patrick Dunn and MiAsia Harris have deemed them the winners. Bottom: Karyme Baranda.

As campers finished their arepas and set aside leftovers to take home, Cajigas announced the lip sync and dance off, the latest development in an afternoon of rock paper scissor contests and card games. Outside, the sky had opened up and dropped pouring rain in New Haven. Inside, it was all smiles.

Jamila Washington, who has been in the camp for three years, sized up her peers with wide, eager eyes. A graduate of Cooperative Arts & Humanities High School and organizer with CWYC, Washington said she was happy to be back after last year’s online camp. In 2019, the camp was her entry into her work with Citywide. Three years later, she has helped organize marches, teach-ins and demands to the Elicker Administration to get cops out of schools.

“There’s just not that many spaces for queer people and queer people of color,” she said moments before the dance off started. “Being back this year, we all get to be together. You just feel all the love and all the queerness. When I first got to the space, it felt very healing to me. It’s a bunch of Black and Brown kids living their truth.”