“One Last Song For The Road” 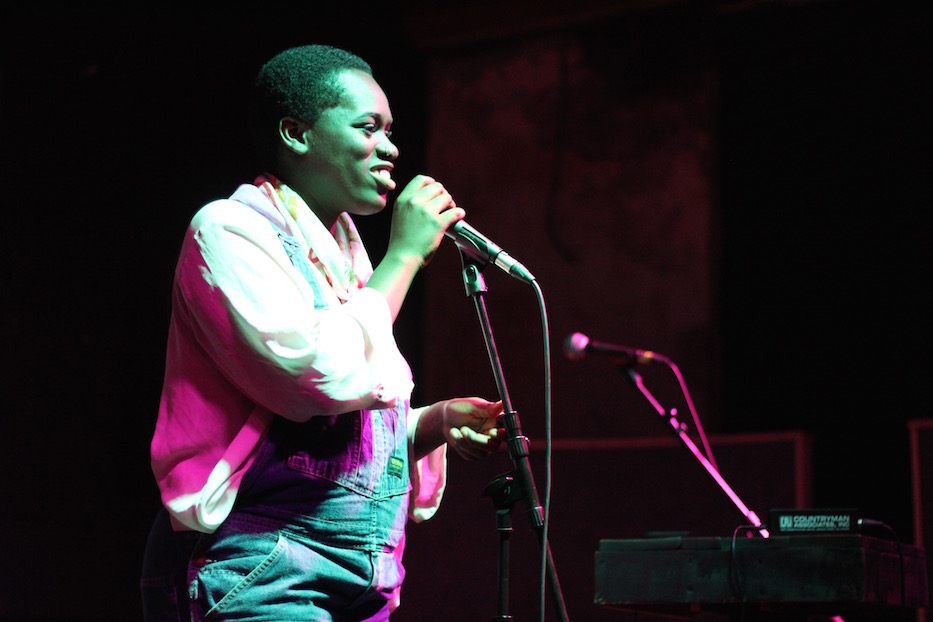 It was past midnight when Salwa Abdussabur looked out at the audience with wet eyes. Already, the stage had been baptized in poetry, graced with rising vocals and flute that didn’t seem humanly possible. Now, at the end of a long night, the artist had the mic. The house was ready. Faces flickered in the candlelight, stretching from the front of the room all the way back to the bar.

Wednesday night marked an emotional sendoff for musician, organizer and wordsmith Salwa Abdussabur, a born-and-raised New Havener who has left a tremendous impact on the city in under a decade. This Friday, the 20-year-old heads to Los Angeles for a stint with Public Allies, a social justice, youth-led program partnered with AmeriCorps. Held at The State House, the event brought in an intimate crowd after a comedy show earlier that evening.

The event, which doubled as a sliding scale fundraiser, raised almost $1,000 for the artist’s plane fare, relocation expenses and housing needs in L.A. Abdussabur said they chose to go for the service position with Public Allies earlier this year because the time felt right to try out a new city. They have spent their entire life in New Haven.

"Thank you, thank you so much," they said, addressing both the room and their creator during a communal dua at the end of the night. "I am really blessed by your grace and mercy to get to this moment and to be surrounded by such amazing human beings, and put on this earth."

Long before that, several performers sang out, played in, and praised Abdussabur for their dedication to grassroots activism and artists of color in New Haven. In the past six years, Abdussabur has grown from a fledgling poet and member of LGBTQ+ Youth Kickback to an organizer and facilitator with The Word, radio co-host with retired cop Shafiq Abdussabur and fitness guru Mubarakah Ibrahim (who also happen to be their parents), outspoken activist, and performer.

In the past two years, they have also aimed to thread together vocal music, spoken word and activism in much of their work. Earlier this year, that work earned them a from-the-floor nomination to the Institute Library’s Board of Directors, a suggestion on which current board members never followed up. 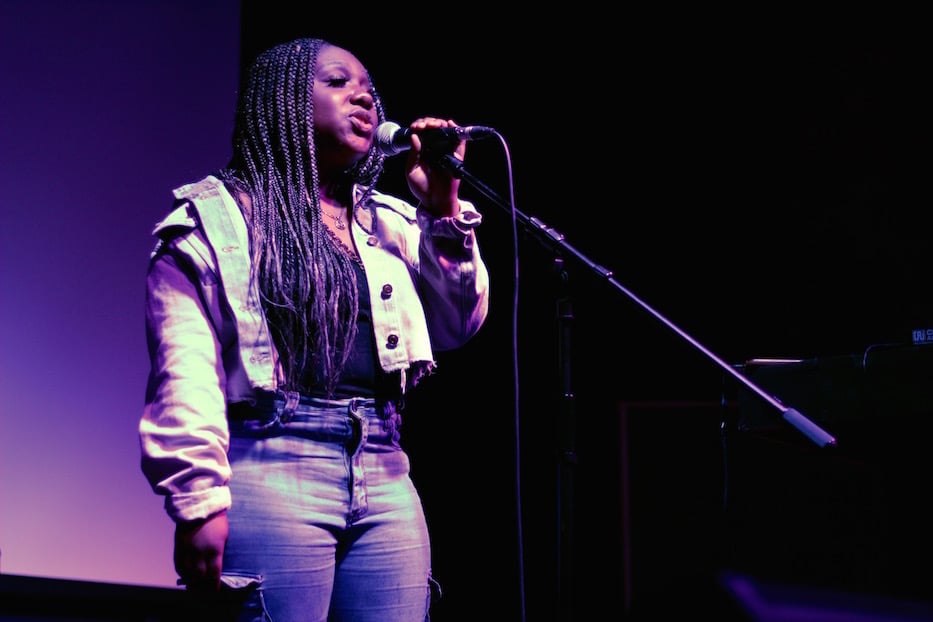 As they took the stage one by one, Abdussabur’s friends and fellow organizers wished them a safe journey, praising the work they have done to make the city’s artistic landscape more inclusive. Mia Brown, who met Abdussabur last May when the two sang backup for Childish Gambino on Saturday Night Live, thanked them for making Brown feel more comfortable as a person and performer, launching into two original songs that lulled the crowd to silence.

“We clicked right away,” Brown recalled of that first meeting last May. “So I’m like, ‘that’s my friend!’”

That admiration flowed from the stage in gushes. Ibn Orator, a musician and performer who has known Abdussabur for several years, turned his performance into a benediction that prepped the stage for the rest of the night. Musician Tyler Jenkins, a member of the band Toxic Holiday who grew up with Abdussabur, thanked Abdussabur for their ability to fill a room with almost no words at all. 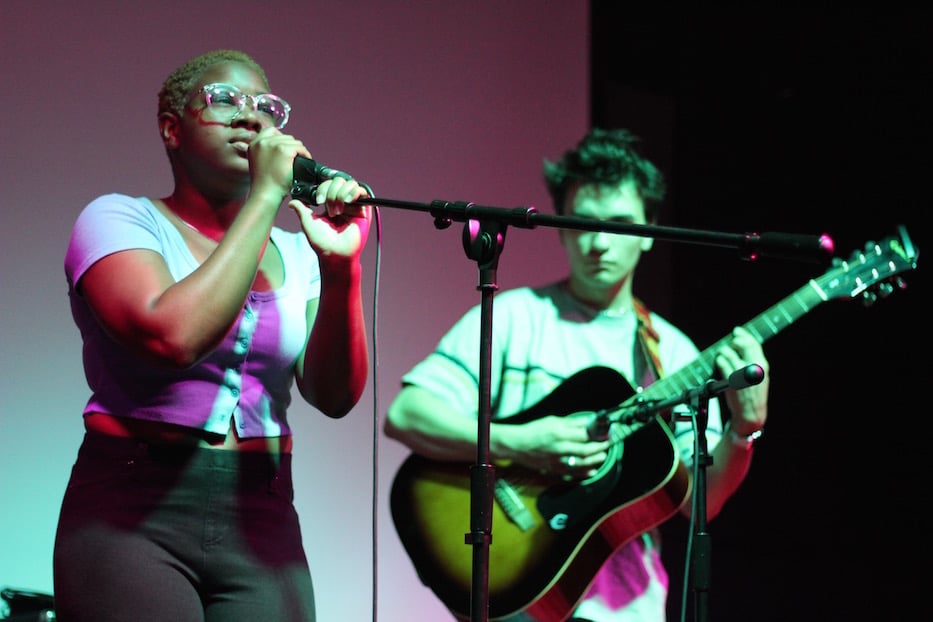 Elizabeth Larkin, who met Abdussabur when LGBTQ+ Youth Kickback was still running out of the Institute Library on Chapel Street, thanked them for teaching others “about community, and justice, and family, and trauma.”

“Salwa, when you say yes, it is with your whole body, your whole throat,” Larkin said. “You’re loud. And when you say no, it is so clear. And people learn when you do. I think that, like, that’s something that you’re leaving with me, and I’m so grateful for it. I’m so proud of you, and I’ve learned so much from you. And I am so happy to see you surrounded by your community.”

That appreciation flowed both ways. Abdussabur cut into the lineup at one point to serenade fellow artist Malenkey Welsh, who heads to Julliard next month after years spent acting with A Broken Umbrella Theatre Company, Oddfellows Playhouse and the Yale Repertory Theatre. They called up Brown and musician Emani Stallings, waxing poetic on their vocals before both singers lived up to the praise with original work. They thanked Slate Liu-Ballard, co-owner of The State House, for listening to and featuring artists of color in New Haven.

It was a lovefest that kept going. Abdussabur introduced Moon as “no joke,” praising the artist’s rise on the local music scene as the artist praised them back. When they invited Dylan McDonnell to the stage for a flute solo, they recalled sending out a message on their birthday last year, on which their wish had been to busk in New York City. McDonnell saw the message, “slipped into my DMs,” and offered up his amp, no questions asked.

On the stage, his thanks back came in musical form. Inspired partly by musician Moses Sumney, he launched into a rising, winding composition, flute glinting from the stage. Notes coasted over the crowd, climbing into nooks and crannies that seemed like they were waiting. Tonal layers emerged one by one, McDonnell cutting in with breath, humming vocals, and surprising flute-bound beats to become his own percussion section. At times it sounded like there were two flutes onstage, a mastery that drew shouts of “yessss!” and “Sing it! Sing it!” from the crowd.

At moments, it felt as if time was standing still, the audience suspended in a bath of warm, tight vocals that might go on forever. Some musicians slowed it down to honey-tinged vocals, others took the audience on a wild, intergalactic ride with mentions of skipping among the stars. Then, suddenly, four hours had passed. Abdussabur was coming to the mic for the second time of the night, and the room fell to a hush. After holding back tears for most of the event, they let their voice catch mid-set.

“I really love you all,” they said, launching into two numbers. When they finished, attendees shouted out requests for one last song. When Abdussabur settled on a title—PJ Morton’s “How Deep Is Your Love”—the audience joined in, arms raised and shoulders shrugging. Hands clapped. Fingers set a low, snapping beat. By the end, 30 voices lifted up the lyrics.

Then it was almost time to go. At 12:12 a.m., Abdussabur came down from the stage for a communal dua or prayer, drawing attendees around them in a circle. After beginning the benediction in Arabic, they continued in English.