Threads By Tea Feels The ETHOS 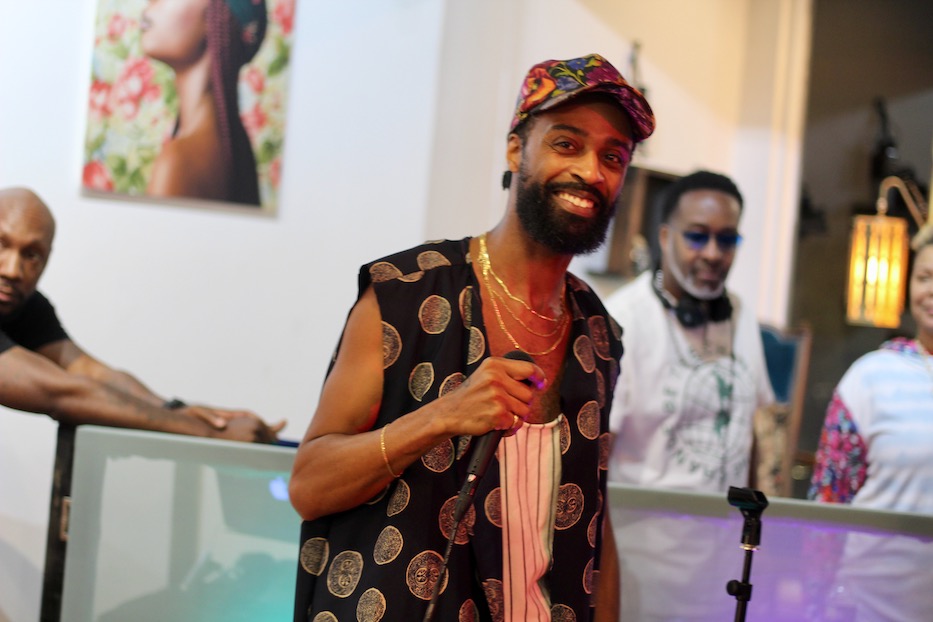 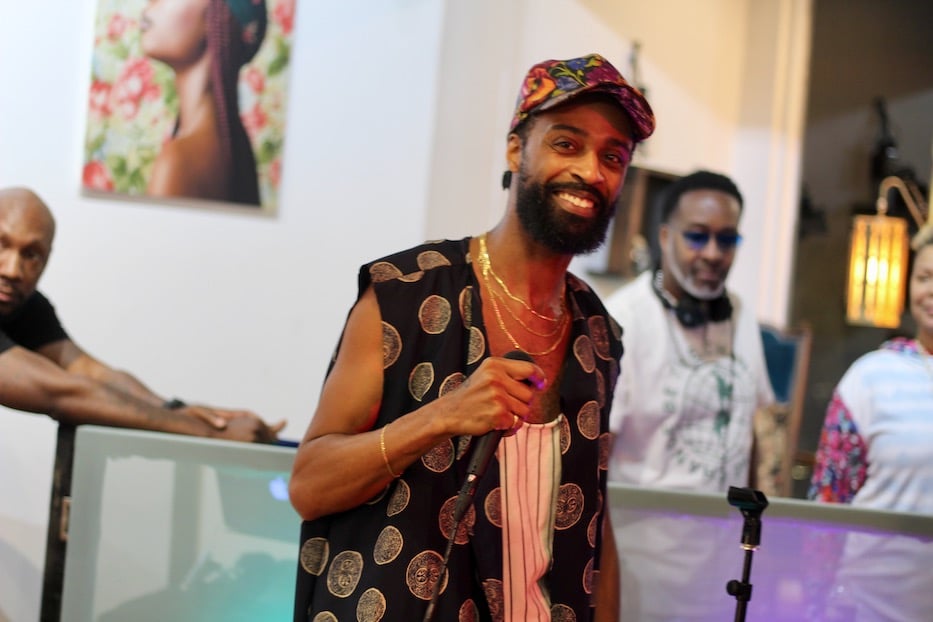 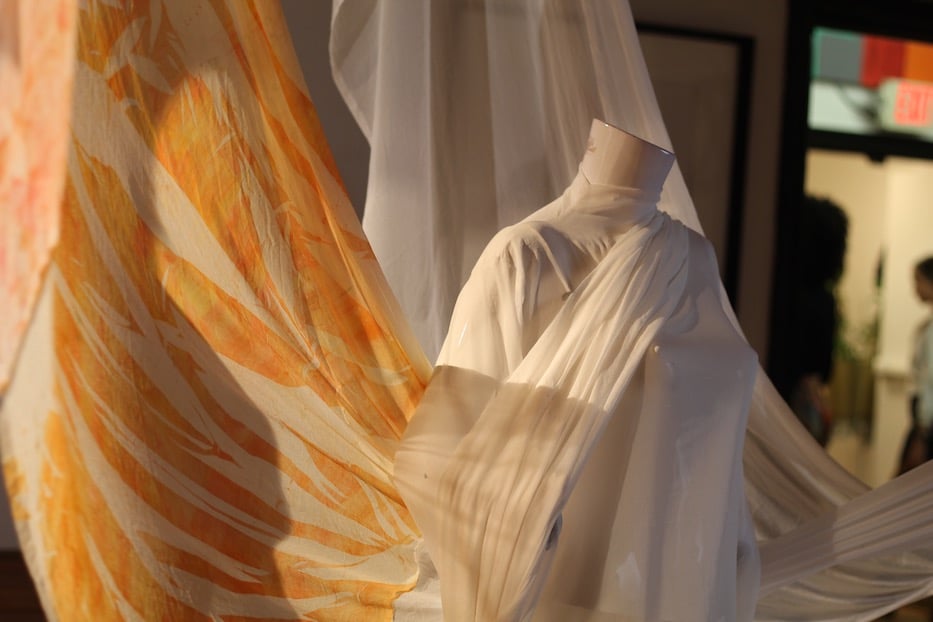 Upstairs at West River Arts, two bolts of printed fabric had taken on a life of their own. One, a milky white, soared from near the rafters to the display below. Another wrapped a mannequin in white and clementine orange. Together, They draped and swam through the space, undulating with the whirr of a fan in the background. If a viewer looked close, it seemed that they were almost breathing.

Down a flight of stairs, purple flowers bloomed across the black-and-white crackle of a raincoat. A fur wrap peeked out to its right. Light glowed soft in the background. Music and laughter bounced through the room, setting a soundtrack.

Lotta Studio and West River Arts transformed for ETHOS: A Wearable Art Experience last weekend, drawing attendees from across the city to explore new work from multimedia designer and fashionista Tea Montgomery. A lifelong New Havener and founder of Threads By Tea, Montgomery took the night to showcase his ETHOS collection, split into three narrative sections. He also performed some of his original music, for what he said may have been the first time in six years. 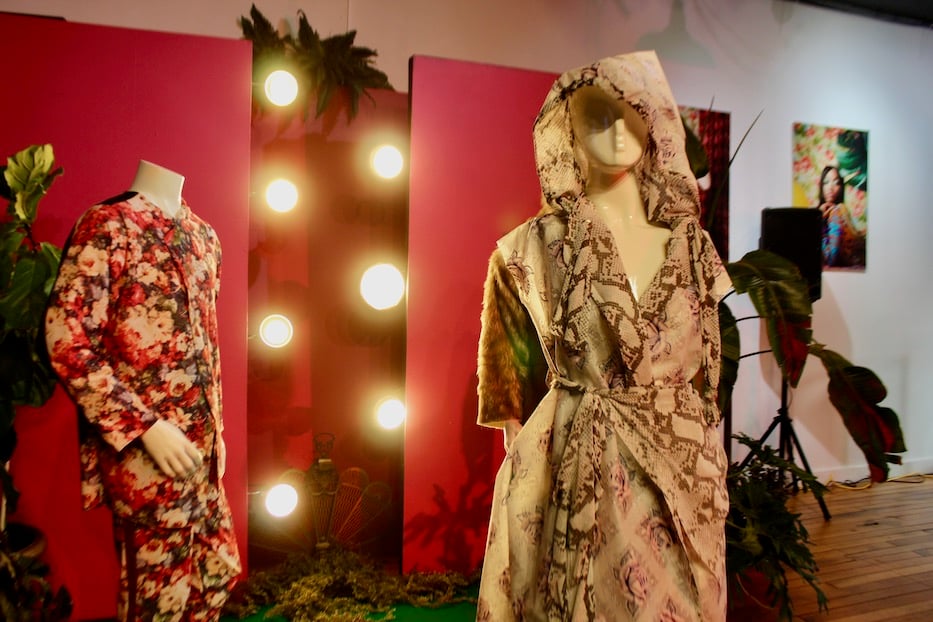 Pieces from "The Jungle." Each narrative section was designed by Mistina Hanscom, co-founder of Lotta Studio. Lucy Gellman Photo.

The collection marks his move into fashion as a full-time career, and from individual, bespoke pieces to small-batch, ready to wear collections (they will never be larger than 20 to 30 pieces, he said). In an intensely collaborative spirit, he worked with Lotta Studio’s Mistina Hanscom, photographer Lia Sinquefield, ConnCORP’s Elaine Roper, Chef Steve Roberts (a.k.a. Nappé Roots) and barista Eddy Caves to make the event happen. By the end of the night, at least five dozen people had been through the space.

“Ethos is an appeal to ethics,” he added. “It’s an appeal to what’s important to us, to what makes us who we are, what challenges us, and how we feel about ourselves.” 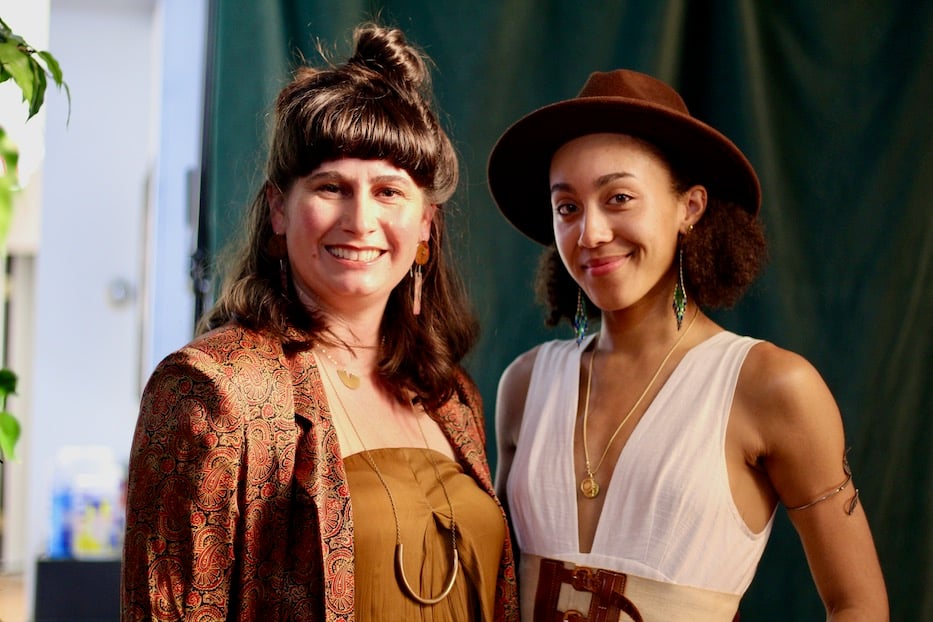 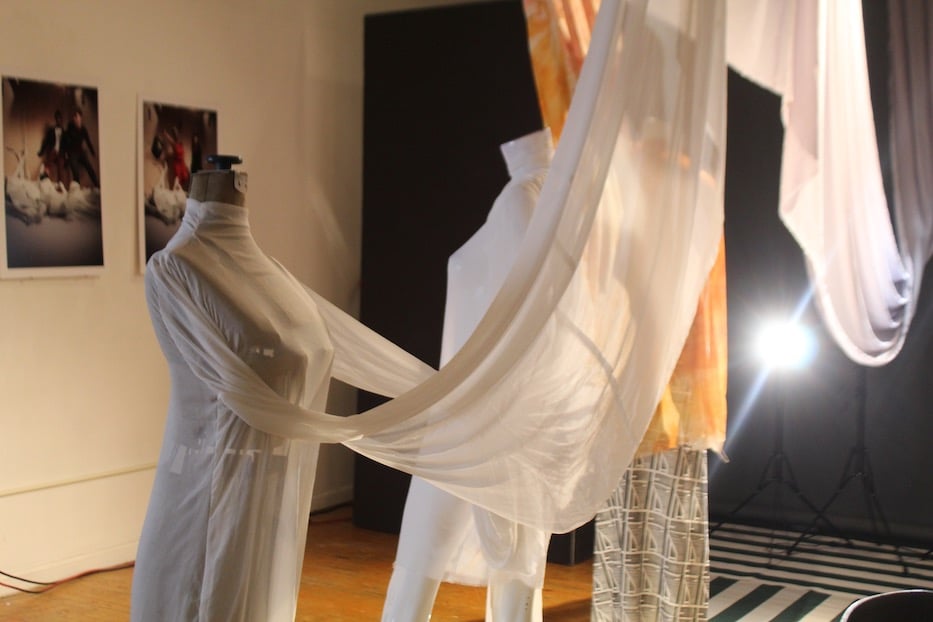 Threads By Tea was born five years ago, after the 36-year-old artist discovered a passion for designing clothing alongside his love for music. As a student at James Hillhouse High School, he had always enjoyed curating outfits, but never thought of it as his vocation. But design kept calling him back. He started working on Threads by Tea at home, while holding down a number of day jobs,. Last year, he moved into a studio at West River Arts.

As he grows Threads By Tea, he sees it as a way to empower both himself and those around him, particularly artist-entrepreneurs.

The collection itself is split into three distinct parts, each designed to tell a story about where the designer has been and where he's going next. The first, titled "The Jungle," includes floral and animal prints, fur, snakeskin-like patterns and bright fabrics that peek out and surprise a viewer when they are least expecting it. He said that it is inspired by both the literal jungle and upside-down-ness of the world, which can sometimes feel jungle-like.

"Much like life, we live in a jungle,” he said. “There's a danger. There are predators. We have to figure out how to survive—and then there's also the beauty of it.” 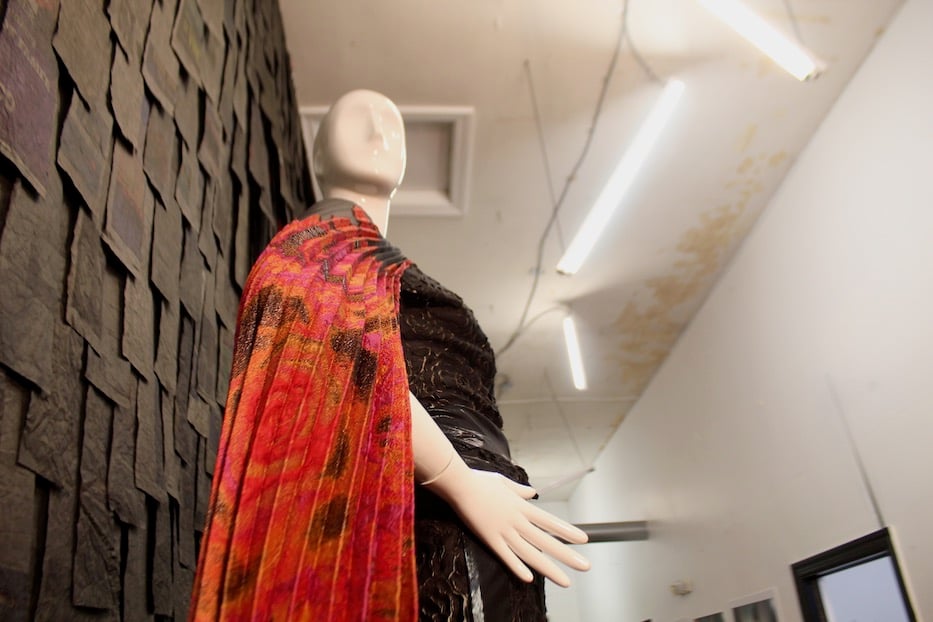 The cape from the "Heroes Collection." Lucy Gellman Photos.

The second, the “Heroes Collection,” is a superhero-inspired take on streetwear with jumpsuits, tops and bottoms, and a cape that turned heads at a fashion show at ConnCORP last month. For him, Montgomery said, creating the collection was a chance to reflect on what kind of superheros—and villaIns—he knew in his own life, and what side of good and evil he wanted to be on. "Truly, the difference between a hero and a villaIn is subjective, it's all a matter of perspective, of what's important to one person as opposed to another,” he said.

The last part of ETHOS, called "Clarity,” is inspired by the mental clarity that Montgomery has recently found in his own life. Designed with block-printed, breezy and translucent fabric from Studio Strata founder Meghan Shah, the clothes have a clean, easy flow to them, as if everything else has been stripped away, and only the most essential parts remain. It is, in other words, a fashion line that feels like the act of breathing.

Shah—an early collaborator and champion of Montgomery's work—said she was floored to walk into a room and discover her work inside.

"That point in life where things start to make sense for us, where we're living in our power," he said. "Where we believe in ourselves. Where we process what we've been through and our emotions, and now we know what to do with them." 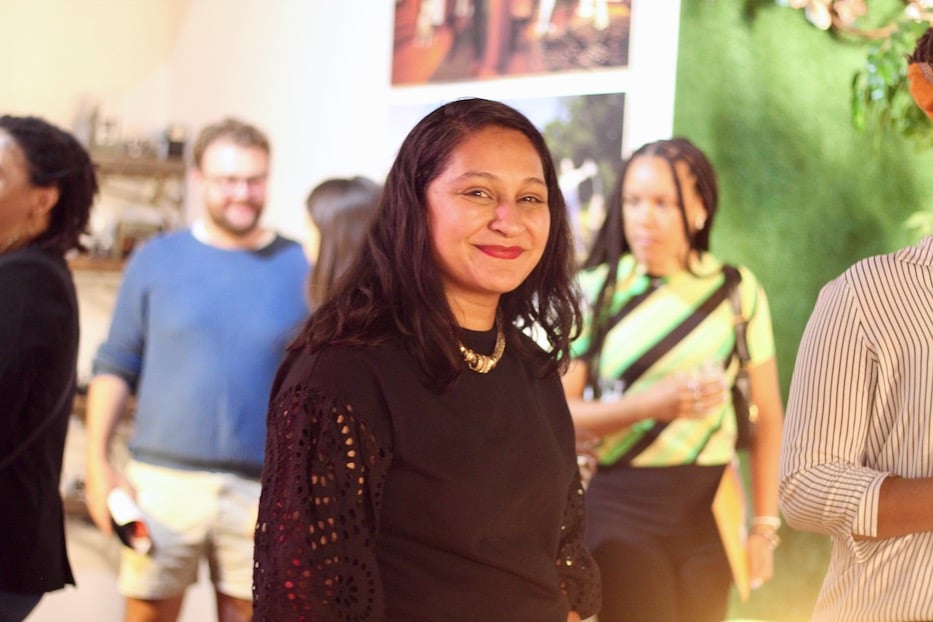 As he premiered the collection last Saturday, attendees buzzed from room to room, pausing to study photographs of models hung on the walls and admire the craftsmanship and cut of the clothes, the fall of the fabrics as they settled on their mannequins. Downstairs, a cluster of friends gathered around the raincoat, comparing notes. Behind them, attendees posed against a lush, pseudo-forested background to the steady click and snap of Sinquefield’s shutter.

One flight up and just beyond DJ Dooley-O's studio, attendees admired a flowy, oxblood-colored shirt, delicate embroidered cape, and black jumpsuit with scalloped sleeves and a deep, sensuous V neckline. The cape, located at the end of the hallway, was a showstopper: attendees studied it slack-jawed, counting the delicate, accordion-like pleats and spread of orange, pink and red across its surface. Several of the pieces from the Heroes Collection feature in Montgomery’s video for “Pay Me,” which dropped in conjunction with the exhibition.

Together, the clothes tell a story of an artist finding himself, and then finding himself again, and then going back to discover what he didn’t know before. To craftsmanship, he has added both a style that is entirely his own and a nod to fellow designers, in a list that appears to include Willi Smith, Kenzō Takada, Hassan Alfaziz Iddrisu and Ruth Carter among many others. 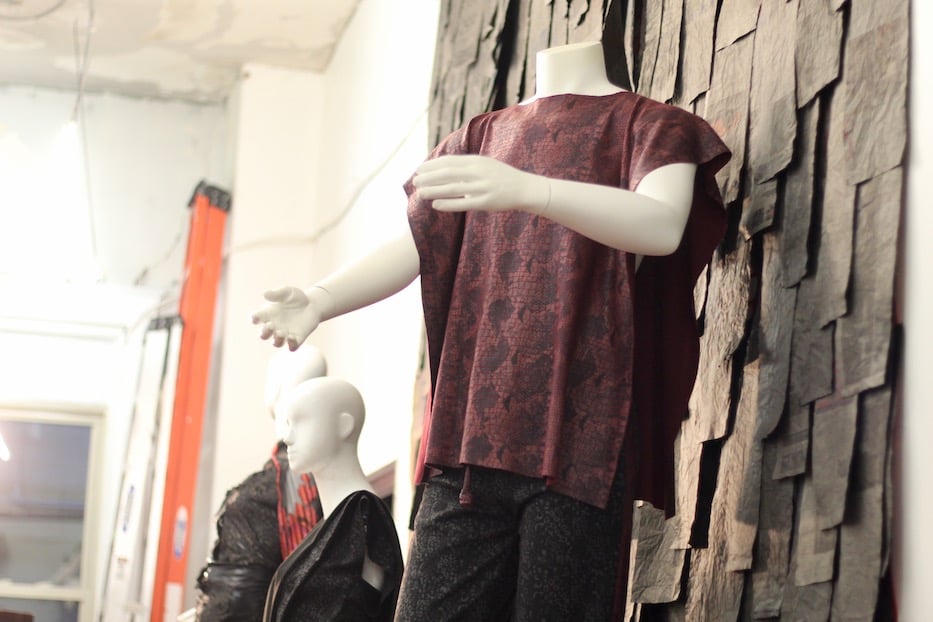 They also speak to Montgomery's detailed process, and interest in sustainable fashion as both a lifestyle choice and a way "to inspire and uplift," he said. All of the works in ETHOS are one-of-a-kind, with fabrics that he has collected around the city, the state, and his travels well beyond Connecticut's borders.

His florals, for instance, are from time spent in Philadelphia. He has lengths of fur and leather that come from New York, cotton and linen from India and Thailand, intricate designs from L.A. Saturday, he sported a sleeveless summer overcoat cut and sewn from fabric at Long Wharf Theatre's Dock Sale.

In other words, "All of it has a story,” he said. He sees his work in part as an antidote to fast fashion, which has become a public health risk, stressor on the environment, and significant source of carbon emissions.

He added that the show is a jumping off point for what comes next. A year ago this month, he left his job managing the JoS. A. Bank store in Milford to pursue his career in fashion and design full time. In the 12 months since, he’s been part of multiple fashion shows, experimented with new designs, and created ETHOS as a “living collection,” meaning that he adds to it as he designs new pieces. While all of them are bespoke, his goal is to have limited edition, ready-to-wear collections in the near future. 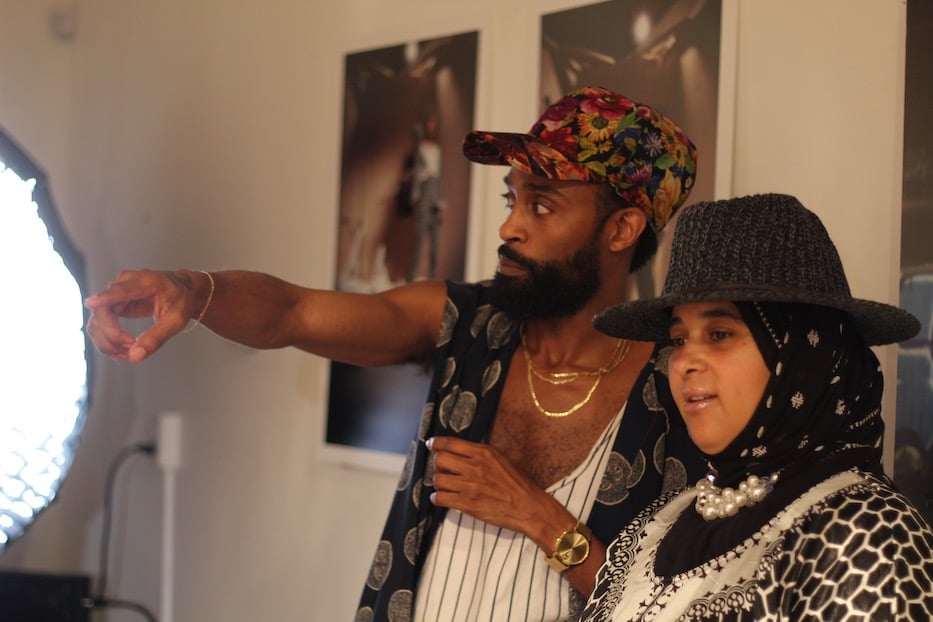 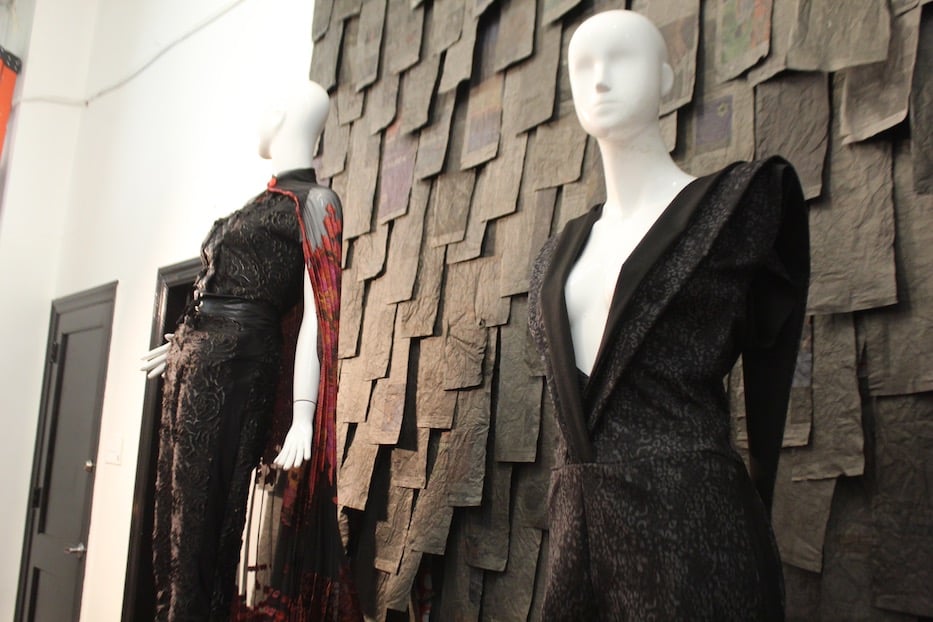 In part, he’s been able to do that with the support of ConnCORP, which in 2021 awarded him a $10,000 grant from its Economic Justice Fund. He also does freelance work, including a design gig with Town Green Special Services District on their upcoming Oct. 14 night market. He said he’s grateful not just for the chance to do the work he loves, but for the immense support he has received.

“This has been years in the making,” he said. “It started as a seed, and all the paths have led to this moment. It took me a long time to figure out my purpose, and what my thing is. And now, I feel like I’m finally living in that. I’m finally able to wield my power.”

Upstairs, Roberts said he's equally excited to see Montgomery thriving—and lifting up other artists around him as his star rises. Ten years ago, the two met for the first time, after Roberts noticed Montgomery's Twitter presence (both grew up in New Haven; they are five years apart).  He remembered attending Montgomery's first event, and knowing even then that he wanted to follow where he was going next. The two have kept tabs on each other as both have grown their cultural work in New Haven.

"Tea is an artist, and I'm glad to see his growth," he said. "Seeing people from New Haven doing this is really cool. I love my city. It's bubbling right now."