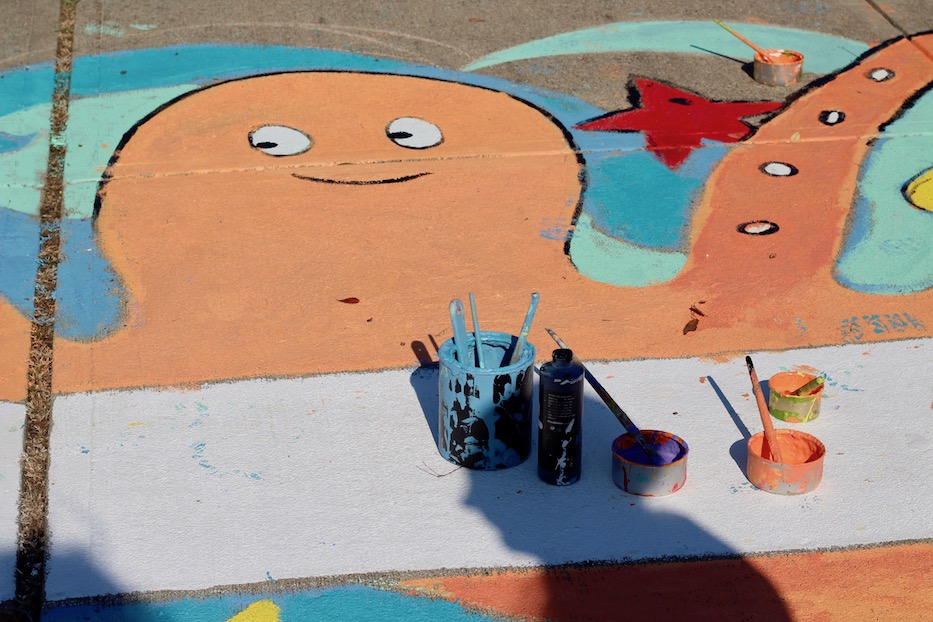 Bright, smiling schools of fish and grinning, multi-tentacled mollusks may be swimming through 10 of New Haven’s school zones next year—if the city can score the $25,000 it takes to get them from proposal to pavement.

The city has selected eco-art engine Lots of Fish to go forward with its Asphalt Art Initiative grant proposal, a project of Bloomberg Philanthropies designed to "activate streets" and increase pedestrian safety with public art on city streets. Monday, city officials chose the organization by committee, with just three days left to finalize the grant proposal before a national deadline.

Hausladen, director of transportation, traffic, and parking for the city, said he expects to hear back in March or April of next year about the grant. If the city does not receive the $25,000 for which it is applying, the project will not go forward.

He praised Lots of Fish Founder and self-described “social impact artist” Joann Moran for her proposal, which focuses on designing, painting, and preserving storm drain art in school zones across the city. While the original proposal featured five school zones at $2,000 per project, Hausladen has recommended doubling that number as the city applies for the full $25,000 that the grant offers. He did not specify which school zones would be included in the proposal, but said that Betsy Ross will be one of them.

“The grant really did want a focus on both safety and art, and that’s what this is,” he said in a phone conversation Monday night. “We loved the lighting ideas, the mural ideas, the downtown projects. This [Lots of Fish] is an existing art program, tried and tested, and it speaks to the grant with respect to safety plus art … and you have an engaged population already.”

Moran’s proposal revolves around the idea that New Haven students will help design, draft, paint and preserve works of public art that double as climate justice and environmental education. It builds on the work she has already done with rain barrels and storm drain art around the city, most recently at Cold Spring and John Martinez Schools.

Currently, Moran’s proposal consists of a three-pronged approach. Each project begins with in-school presentations on the waterways that populate New Haven, teaching students about the individual role they can play in preventing the pollution of waterways. As part of these presentations, students will draft their first designs for storm drain and crosswalk art. When they are done, Lots of Fish will have a commissioned artist make a composite design and prep the area.

Finally, students will paint alongside artists from the community, as they did on a recent weekday in Fair Haven. From beginning to end, Moran will work with the city to secure the proper permits for each school zone. In all, she estimated that each site will come to $2,000.

The plan dovetails with a proposed curriculum she is hoping to implement with the City of New Haven in the coming academic year. Working with City Engineer Giovanni Zinn, she has begun to dig into a framework that blends environmental education with public art, multimedia assemblies and project maintenance. She is currently working with local musicians Frank Panzarella and Party Kidd.

Her goals remain “community beautification through local engagement, education and awareness of our connection to local waterways, and amplification of school zone crosswalks,” she wrote in the proposal.

Of the proposals, Hausladen added that the committee was enthusiastic about several of the projects and will be responding to applicants with suggestions on how to make their work more feasible for future opportunities. Ultimately, he added, the group wanted to avoid anything that puts a timeline out of the city's control—like state roads, which require permission from the Connecticut Department of Transportation.

“Some [proposals] were a little bigger and out of scope,” he said, referencing one from Street Art for Mankind that utilized the entire New Haven Green. “Some of them were straight up art.”