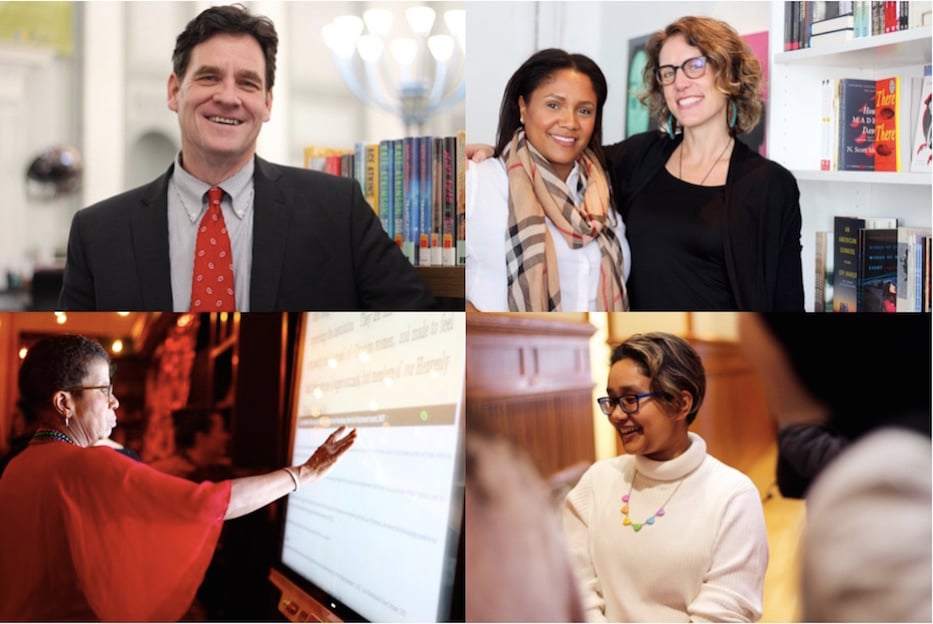 The New Haven Free Public Library is facing a proposed budget cut of over $100,000 for the city’s next fiscal year. If that cut goes through, staff will make it work—but their resources will be stretched farther than they already are.

City Librarian John Jessen made that case Monday night, in the third budget workshop held by the Board of Alders Finance Committee. His appearance followed several public pleas not to cut library funding last month, at the second public hearing on the city budget. The hearing took place virtually via Zoom.

"It's not going to be easy,” Jessen said about the proposed budget cut. He added that in the midst of the COVID-19 pandemic, as the library has continued to offer as many of its services online as it is able to. “It will be tight. But I do think it's doable."

“In good times, in bad times, and certainly in these times, the New Haven Free Public Library stands as a beacon and a bulwark in our community,” said NHFPL Foundation President Elsie Chapman in her earlier testimony (read more on that below). “Free and open to all.”

The number represents a 4.51 percent decrease from last year’s approved budget: the mayor has proposed removing $100,000 from the database and collections management line item, and another $15,000 from the communications and office equipment line items. 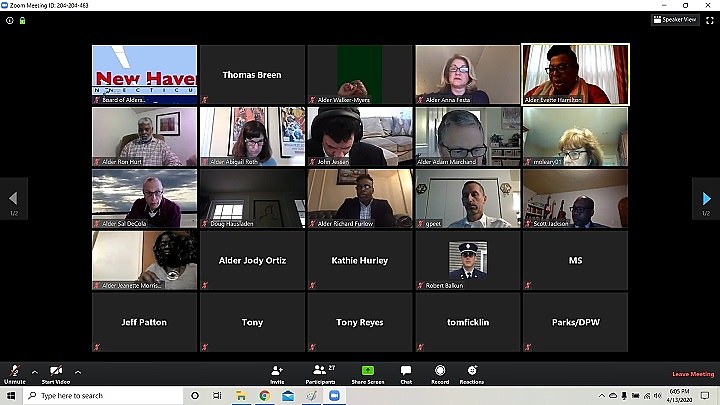 The proposed cuts mark a transition from suggestions outlined in a Mayoral Transition Report released earlier this year. The report (read it here) suggested a city-wide review of library staffing needs and increase in library salaries, as well as an abolition of late fees and 1 percent allocation for the library in the city’s general fund.

Currently, library staff make less money than all of their regional counterparts in the state. Elicker has asked city staff to make cuts across the board to help close the city’s deficit.

Monday, Jessen explained that those cuts translate to two main losses. The first is a blow to its physical and digital collections, including databases, books, periodicals, magazines, foreign language learning and study materials. The second is a reduction of funding for contracting for HVAC maintenance, plumbing, electric work, outdoor landscaping, and indoor materials like printer cartridges, toner, landlines and computer software.

"The cuts that I suggested did not involve any staffing cuts,” he said Monday. “We've found that once we start cutting into our staffing budget, it has a really bad effect on hours and other services and programmatic services."

If the proposed cuts are approved, the library plans to eliminate databases that aren’t getting heavy traffic from the public. Currently, several of the databases to which the library subscribes aren’t used at full capacity, either because the public doesn’t know they’re there or because they aren’t intuitive enough for basic use. Jessen named ABC-CLIO as one such example: it hasn’t “kept up” with the digital age, and students often find information more quickly from Google. The problem, of course, is that Google isn’t always peer-reviewed.

“We'll jettison the stuff that is not working, and we'll replace that with really good, curated lists of links and updated materials that our librarians will be actively researching and putting up on our website,” he said. “ … I think we’re gonna be stronger for it in the end.”

But database acquisitions and licenses only account for so much of that funding. With the cut—about one third of the same budget line item last year—the library will have fewer resources to dedicate to new books, including foreign language materials that serve the city’s Spanish-speaking and immigrant and refugee populations.

It will have less funding to spend on materials that members of the public, many of whom use the library as a lifeline for jobs and professional development, may not otherwise have access to. The bulk of cataloguing will be automated, as much of it already is.

In that system, Jessen explained, the library tracks what titles, databases, or affiliate subscriptions people are accessing and how often, and makes purchases based on that data. He added that there will be a push to streamline collections with programming, as there already is at several of the library’s five branches.

"I don't quite understand what you mean about automating decisions about what to buy,” said Westville Alder Adam Marchand. “You know libraries, they used to have bibliographers who were experts, who made decisions about what you purchase. You know, to add to a collection. Curators would do that. A machine is making that choice? Is it like, a statistical analysis of what we are reading?"

"These are tough cuts,” Jessen responded. “But we were asked to do this, and I think all departments are on board to look at tough decisions. The library's running very lean as it is, and I wanted to stay away from cutting staffing." 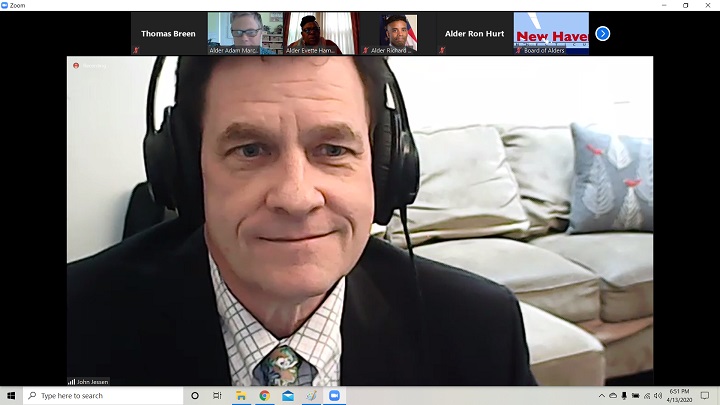 While the library has also requested two new staffing positions for the expanded Stetson Branch, set to open at the renovated Q House next year, the proposed budget does not include funding for either of them. One of those positions is for a teen and young adult librarian. The other is for a library technology information assistant. Jessen said he is hopeful that those positions will be funded in the city budget by next fiscal year.

His testimony echoed calls from the community to keep the library budget intact at previous levels. At a city budget hearing in late March, Metropolitan Business Academy student and climate activist Adrian Huq urged alders to reconsider proposed cuts to the institution.

They described frequenting the downtown main branch of the library almost daily before it closed its doors in mid March, using its virtual reality technology, open meeting rooms, and teen center before heading all the way home to Derby. Without proper funding, they said, they are worried that the library's branches will remain underfunded and unable to adequately serve the communities they are part of.

“I, along with many other young people, rely on the library for resources I wouldn’t otherwise be able to access,” they said. “I am typically there every day after school, taking advantage of their internet access, books, and more. The library has been essential to my life as a student and has become a second home.”

“No matter what neighborhood you live in, you should be able to access a library with adequate materials and space to serve your community,” they later added. “Continued and better funding of our libraries will have a positive effect on youth and adults alike.”

People Get Ready co-founder Lauren Anderson, who serves on the library’s board of directors, focused her testimony on the need for two funded positions at the Stetson Branch. She added that she’s also looked at the numbers: a $100,000 cut to library collections means 4,000 fewer books per year, or a digital resources budget that operates at half of what it does now.

Describing the library as “a refuge, a resource for my own learning, and an avenue for quenching my insatiable appetite for books,” Anderson called on alders to protect library funding for the nearly 900,000 visitors who come through its doors and five branches annually. She painted the institution as a system that is both essential and essentially human, with librarians at its wildly beating heart.

“Librarians and library staff are the best equipped to help us access the quality resources we need, and we need them desperately,” she said. Of the Q House, she added, “with an anticipated opening in March of 2021, these positions must be funded now, at minimum at 50 percent.”

Elsie Chapman, who is on the board of the New Haven Free Public Library Foundation, echoed Anderson’s call for the positions at Stetson. Since May 2017, she has been raising $2 million for the new branch at the Q House.

She has listened to Mayor Justin Elicker and agrees with him that it is going to be a financially challenging budget year. That was true even before a global pandemic swept through the city and closed the library’s doors.

But she’s also trying to heed the advice of her 98-year-old mother: “Don’t throw the baby out with the bathwater.”

“In other words, don’t make the avoidable mistake of rejecting or harming something good when trying to get rid of something bad,” she said. “The New Haven Free Public Library is the city of New Haven’s baby.”