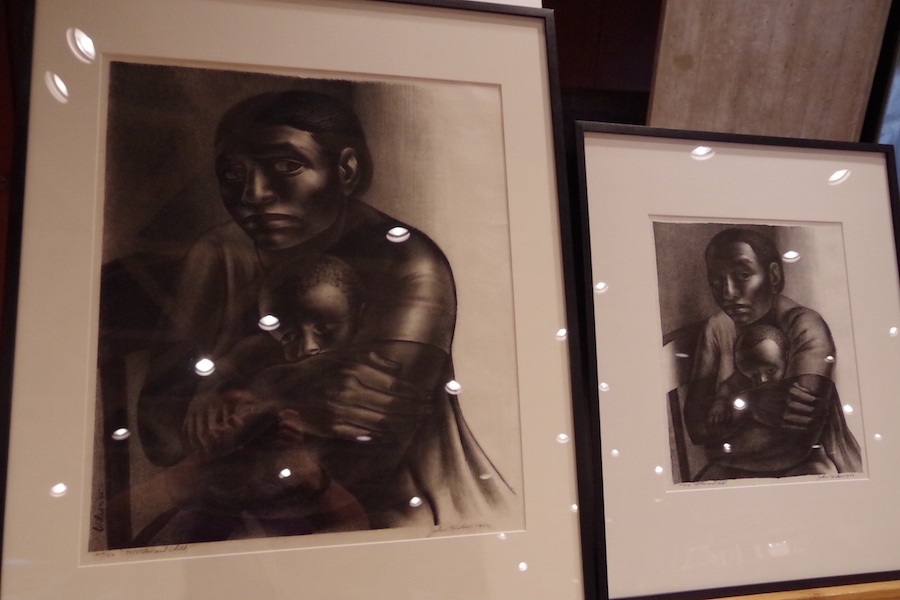 Hire Black scholars—and start compensating them equitably. Listen to your students and staff when they raise concerns about racism in their classrooms and in the galleries. Invest in anti-racist leaders, and do the anti-racist work to keep them on.

Those are just some of the recommendations in a new, open letter to Yale University Art Gallery Director Stephanie Wiles, addressing the gallery's long relationship with structural racism, white supremacy and alleged anti-Blackness in its collections, staffing, and hiring practices. Over 130 current and former students, staff, gallery employees and alumni have signed.

The letter was "written by a group of over 40 current and former student Gallery employees" according to signatory Katherine Nova McCleary. Leah Tamar Shrestinian, another of the 40, has served as a point of contact between the students and employees and Wiles (both McCleary and Shrestinian were student curators on the gallery's Place, Nations, Generations, Beings: 200 Years of Indigenous North American Art, as was collaborator Joseph Zordan). After years of pushing for greater representation and transparency at Yale and in the gallery, both graduated in 2018. Zordan graduated in 2019.

McCleary, who is Little Shell Chippewa-Cree, is now a legislative assistant on Indian Affairs in the U.S. Senate. Shrestinian works for the organization Kaboom!, dedicated to the concept of "playspace equity"—the concept that kids have a safe place to play, no matter where they are in the world.

The letter, which started circulating Wednesday, comes in the wake of the gallery's relative silence following the state-sanctioned murders of George Floyd, Ahmaud Arbery, Breonna Taylor and Tony McDade. While the gallery has shared images by artists John Wilson and Titus Kaphar to Instagram, as well as a photo caption that "we stand with all those peacefully protesting to demand change," it has not released a formal statement or public equity framework.

It is not the only institution to be facing backlash: several artists, educators and practitioners in the fine and performing arts have asked for more demonstrable action than words alone. In the letter, writers name the Field Museum, the Museum of Fine Arts Boston, the Brooklyn Museum, and the Baltimore Museum of Art as places that "have responded to this moment by reflecting on racism within their own institutions."

"It is not enough for museums and institutions like the Yale University Art Gallery to 'work towards' diversity, equity, and inclusion," McCleary wrote on Instagram Wednesday. "They must commit to being anti-racist institutions and actively work to undo the anti-Black racism they have continued to benefit from. The Gallery can start by listening to and compensating the Black students, staff, and scholars who have repeatedly told them how they can do better."

In the letter, former employees recommend more intentional work toward diversity, including the fair compensation of students, fellows and employees of color and specifically Black employees; a commitment to correcting "the misinterpretation" of artists of color in the gallery; better policies surrounding racial discrimination in the workplace; and a vocal commitment to community partners including Black Lives Matter New Haven, the Connecticut Bail Fund, People Against Police Brutality, and Justice for Jayson.

It comes at a time when most curatorial and educational staff at the gallery are white, including curators on exhibitions that have dealt with the enduring, and lethal, trauma of white supremacy. In an exit interview in summer 2018, Director Emeritus Jock Reynolds gave the institution “a gentleman’s C minus” for diversity of its staff. Earlier this year, the gallery did offer several staff members the opportunity to participate in an Undoing Racism training with the People's Institute for Survival and Beyond.

During an interview with the Arts Paper in February, Wiles added that the gallery had started a working group dedicated to diversity, equity, and inclusion. With its doors closed, the gallery has recently pointed viewers toward its collection of Kaphar's work and Reckoning with “The Incident”: John Wilson's Studies for a Lynching Mural.

In the latter, viewers are given a single trigger warning before walking in on an archival image of the event in question, surrounded by foot and hand studies as if it is a salon-style installation. There is little historical context: a James Baldwin quotation sits haphazardly on one wall, across the room from a bookshelf of self-directed, recommended reading. The words "white violence," "police brutality," and "Black Lives Matter" do not appear in the show.

One day after the letter was released, the nearby Yale Center for British Art (YCBA) issued a statement that it would be offering free water to protesters during a protest led by CityWide Youth Coalition and Black Lives Matter New Haven on Friday. After her arrival in April of last year, YCBA Director Courtney Martin said she was ready to tell a new story with the existing collection.  On Friday, she released a statement on the center's website.

"Words feel flat in the aftermath of George Floyd’s (1974–2020) death on May 25, 2020," she wrote. "In the days that followed, our country has erupted, calling forth the brutality and violence that both skims the surface of our daily lives and resides deep within our shared histories. What can we, a museum, do at this moment? My colleagues and I are looking for ways to take action that will, over time, bring change to our institution so that we are a resource for the city of New Haven and the Yale University community. For now, we offer our deepest sympathies to Mr. Floyd’s family, especially his children, who will need our collective care for the rest of their lives."

"The Yale Center for British Art offers visitors the opportunity to critically explore the world and their own lives through art," she continued. "We look forward to the day when we can once again welcome visitors to the Center to engage in productive dialogue as we develop relevant programming to address the critical issues of our time."

The full letter, which has been signed by over 130 students, alumni, and current and former employees, is below. It is also accessible as a Google Document.

Friday afternoon, Wiles responded with a letter to members outlining a few next steps, including a Diversity, Equity, Inclusion, and Access (DEIA) Task Force started earlier this year, creation of a five-year strategic plan, and partnerships that the gallery hopes to build with the Greater New Haven Branch of the National Association for the Advancement of Colored People (NAACP) and Black Lives Matter New Haven.

Wiles also pointed to Place, Nations, Generations and Reckoning with “The Incident”: John Wilson's Studies for a Lynching Mural.

"On behalf of the Yale University Art Gallery, I want to affirm to you—our community and supporters—our collective belief in equality, inclusion, and racial justice for all Americans," she wrote. "We resolutely stand against racism, and we are appalled by the violence we continue to see in our communities against Black Americans, and against all others who experience persecution due to race, background, or beliefs."

The full text of the open letter is below. A response from Wiles can be read here.

We are reaching out to call on the Yale University Art Gallery to address the recent incidents of white supremacist violence and police brutality against Black people. We have seen the institution grapple with its approach to equity and inclusion and make strides toward more equitable representations of people of color. As recent events have shown, the usual commitments to diversity, equity, and inclusion are not enough. Institutions must commit to taking concrete actions to undo the anti-Black racism they profit from and perpetuate.

Globally, museums are reckoning with their histories of upholding white supremacy through the collection and misinterpretation of the arts, material cultures, and bodies of people of color, particularly Black and Indigenous peoples. These histories are directly and inextricably linked to the anti-Black racism that leads to police brutality and the murder of Black people every day in this country. It is important to correct past and present misinterpretation and lack of representation through exhibits like Reckoning with “The Incident”: John Wilson’s Studies for a Lynching Mural (2020), but this is not enough. Museums have profited off of these collections for centuries without compensating artists and communities. The Gallery must support contemporary movements for freedom and justice and address its internal racism to begin to repair its relationships with communities and employees of color.

We were encouraged to see the Gallery’s recent social media posts highlighting John Wilson and Titus Kaphar’s art in a show of solidarity. At the same time, considering the urgency of the current situation, these posts came too late and offer too little. By qualifying support to apply only to those “peacefully protesting” the Gallery implicitly reprimands those protesting by other means. Mass uprisings happen for a reason. Black lives matter more than property, and support for Black people must be unconditional.

In addition to making a more forceful external statement in support of the anti-racist protests across the country, we ask that the Gallery redouble its efforts to confront and redress racism internal to the institution, and to communicate the actions it will take to the public. It is time to commit to being an anti-racist organization.

We recommend the Gallery create and share concrete plans for how it will take the following actions:

I. Listen to and compensate Black scholars, students, staff, employees, and consultants who offer guidance on ways to move forward with anti-racist work.

II. Hire, support, promote, and retain Black employees at all levels of the institution, particularly in curatorial departments and leadership positions.

III. Commit the time, energy, and resources to building meaningful, equitable, non-extractive relationships with Black communities and other communities of color in New Haven and at Yale.

IV. Address the misinterpretation of Black peoples and artists, as well as Indigenous peoples and other people of color, in the Gallery.

V. Create policies and procedures to swiftly and adequately address complaints of racial discrimination in the workplace, for full-time, part-time, and student employees.

Commitment to anti-racism needs to be ongoing and plans to take action must include measures to hold Gallery leadership and staff accountable to long-term change.

Peer institutions, including, but not limited to, the Field Museum, the Museum of Fine Arts Boston, the Brooklyn Museum, and the Baltimore Museum of Art have responded to this moment by reflecting on racism within their own institutions. We urge the Gallery to do the same and to be unafraid and uncompromising in its commitment to anti-racism.

We were heartened to see the Gallery rally to support first responders and healthcare workers in the face of COVID-19 by donating PPE supplies, and we ask the Gallery to similarly extend support to Black organizations in New Haven and beyond who fight against racial inequity and police brutality including, but not limited to: Black Lives Matter New Haven, the Connecticut Bail Fund, People Against Police Brutality, and Justice for Jayson.

Thank you for your time and consideration of these requests.